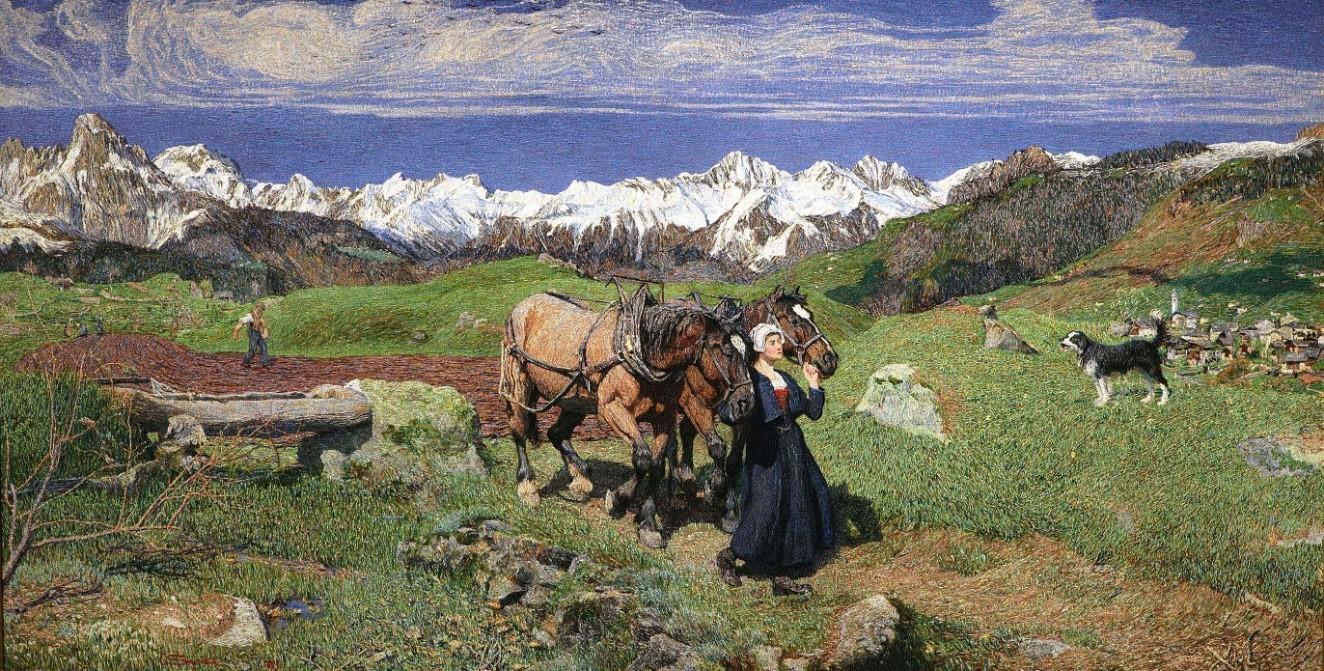 Giovanni Segantini, Spring in the Alps, 1897

LOS ANGELES – The J. Paul Getty Museum announced today the acquisition of Spring in the Alps, 1897, by Giovanni Segantini (Italian, 1858-1899). Originally painted for Jacob Stern, a San Francisco collector and director of Levi Strauss & Co, the painting has a long connection to California. It was on continuous loan to Legion of Honor in San Francisco from 1928 until it was sold by Stern’s descendants in 1999.

“Giovanni Segantini was at the peak of his career when he created this luminous panoramic scene,” said Timothy Potts, director of the Getty Museum. “Featuring his characteristic thick brushstrokes and brilliant color palette—which includes flecks of gold leaf—the painting is among the most extraordinary and captivating landscapes produced in Europe at the end of the 19th century. It will resonate powerfully alongside our great Impressionist and Post-Impressionist works from France and paintings by northern European artists of the era. Significantly, with this acquisition, Spring in the Alps finds a permanent public home in California, its original destination, and we hope museum-goers from San Francisco, where it was on view for more than 70 years, will visit the painting at the Getty when they are in Los Angeles.” 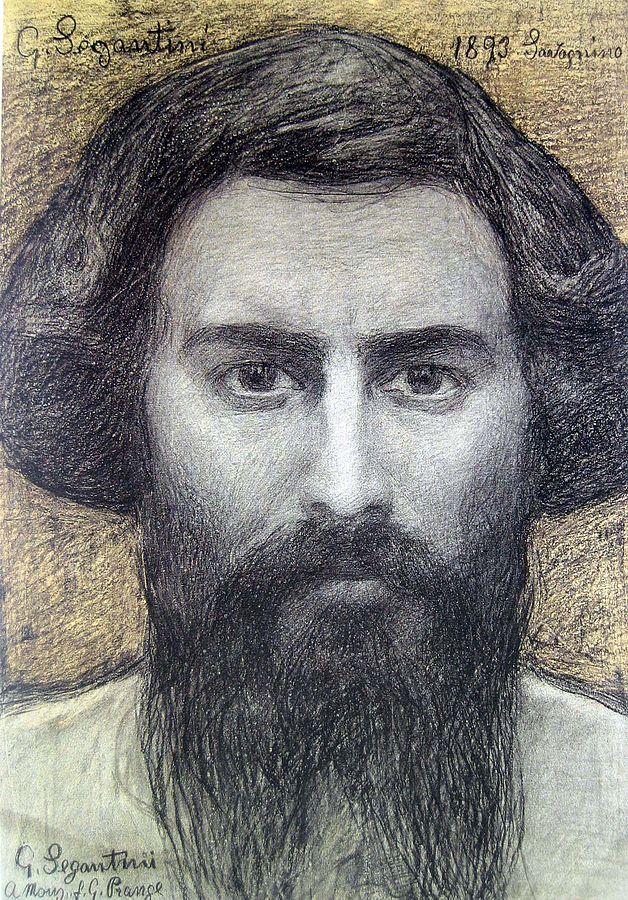 At more than four by seven feet, Spring in the Alps is a monumental, sweeping depiction of an alpine landscape near the village of Soglio in Switzerland, with its recognizable church tower visible on the right side of the picture. The view is of an expansive plateau and valley ringed by glaciers and majestic snow-capped mountains. In the middle of the composition a farm woman dressed in a blue and red peasant costume characteristic of eastern Switzerland leads two large horses past a watering trough. They are coming from a freshly plowed field where a sower scatters seeds and a black and white dog stands guard. The scene is sunny and colorful, emphasizing a glorious vista with a brilliant blue sky and ribbons of clouds.

Segantini painted the sizeable canvas in the open air, with additional work completed in the studio. He took liberties with the topography to suit his composition, adjusting the relative scale of the mountains, the perspective of the valley, and the position of the town. He created the vibrant color scheme and brilliant effects of light following the principles of Divisionism, the practice of juxtaposing pure local colors in the belief that the hues mix optically in the eye of the viewer, creating especially luminous effects. This pseudo-scientific movement in painting was first launched in France in the 1880s by George Seurat and Paul Signac, where it was dubbed “Neo-Impressionism.” The movement was subsequently adopted by Italian painters, with Segantini becoming a principal exponent. In contrast to Seurat’s pointillist brushstrokes, Segantini employed long, thin strokes of contrasting color. The rich impasto and the tactile, almost woven, quality of the painted surface, marvelously capture the crisp transparency of the atmosphere, the harshness of the rocks, the thickness of the grass, and the roughness of the skin of the animals.

“Spring in the Alps is a joyous hymn to the cycle of life and the reawakening of nature in spring after a long, hard winter,” said Davide Gasparotto, senior curator of paintings at the Getty. “It is an extraordinarily accomplished work where symbolism and naturalism are inextricably intertwined. Segantini himself counted it among his absolute masterpieces. Panoramic in scale and astonishingly luminous, Spring in the Alps is one of the greatest paintings of the Italian Ottocento in America, an iconic work that expands our ability to tell the story of 19th-century European painting.”

Spring in the Alps was commissioned by the American painter Toby E. Rosenthal (1848-1917), who resided in Munich, for San Francisco businessman and collector Jacob Stern (1851-1927), whose father, David Stern, co-founded Levi Strauss & Co. Segantini exhibited the picture at the 7th Munich Secession in 1897 and then took the painting back to his studio in Switzerland where he made further adjustments. In early 1899 the picture was sent to San Francisco to be the centerpiece of Stern’s collection. It was so well known even then, that the painting’s rescue from the 1906 earthquake and fire was reported in the national press. Upon Stern’s death in 1927, and in accordance with his wishes, Spring in the Alps was loaned by his heirs to the California Palace of the Legion of Honor. There it stayed on public view for more than 70 years. In 1999 the estate of Stern’s heir sold the picture at auction in New York.

Born in Arco (Trento) in 1858, Giovanni Segantini counts among the most important Italian artists of his generation. He was internationally famous for his dreamy Alpine landscapes, which combine elements of Jean-François Millet’s reverent naturalism with Georges Seurat’s dappled Divisionist technique and the allegorical subjectivity of the work of contemporary Symbolists, from Gustav Klimt to Paul Gauguin. Segantini’s work represents the transition from traditional nineteenth-century art to the changing styles and interests of the twentieth century.

Orphaned as a boy, Segantini was apprenticed to a photographer in Milan, where in 1873 he began attending night classes at the Brera’s Academy of Fine Arts. In the early 1880s, on the advice of the painter-dealer Vittore Grubicy de Dragon, he experimented with plein-air painting during an extended visit to the Brianza region. Marketed by Grubicy, with whom Segantini signed an exclusive contract in 1883, the resulting landscapes attracted international attention and quickly made their author’s fortune. Segantini settled in the picturesque Swiss valley of the Engadine, where he painted views of the surrounding mountains for the rest of his career, often carting his enormous canvases out into the elements to work directly from nature. Despite his somewhat remote location, Segantini kept abreast of the contemporary art scene, maintaining a lively correspondence with Gustav Klimt, Max Liebermann, and others, while his work was exhibited in London, Amsterdam, Paris, and Munich. 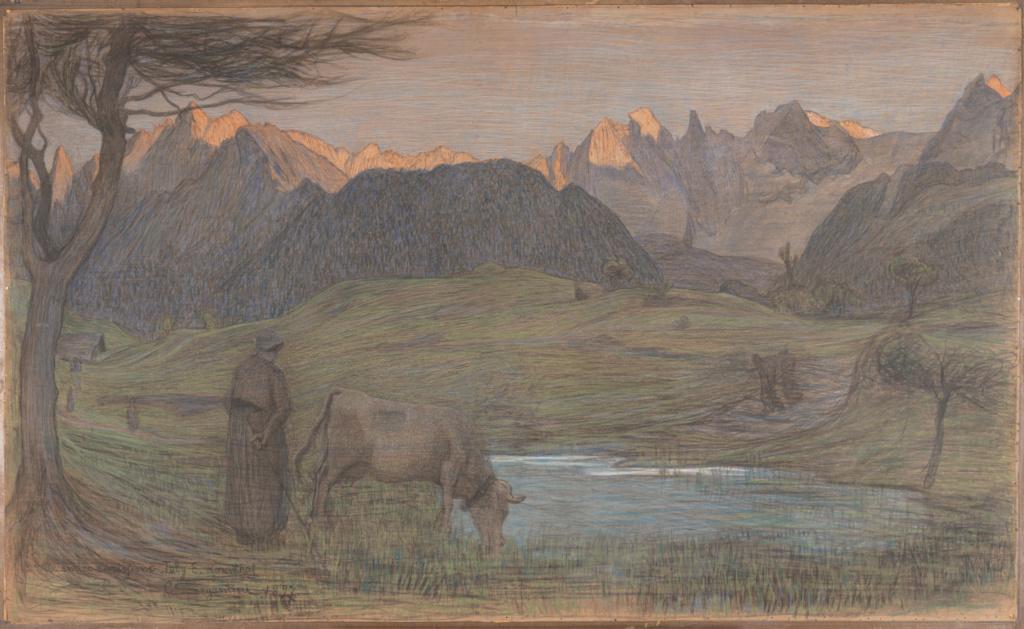 In 1897, Segantini was commissioned by a group of local hotels to build a huge panorama of the Engadin valley to be shown in a specially built round hall at the 1900 Exposition Universelle in Paris. Before it was completed, however, the project had to be scaled down for financial reasons. Segantini redesigned the concept into a large triptych known as Life, Nature, and Death (Museo Segantini, St. Moritz), which is now his most famous work. Eager to finish the third part of his large triptych, Nature, Segantini returned in 1899 to the mountains near Schafberg. The pace of his work, coupled with the high altitude, affected his health, and in mid-September he became ill with acute peritonitis. Two weeks later he died at the age of 41. Two years later the largest Segantini retrospective to date took place in Vienna. In 1908, the Museo Segantini was established in St. Moritz, Switzerland.

Spring in the Alps joins another important work by Segantini in the Getty Museum’s collection, Study for “La Vita”(1897), a large pastel that parallels the painting’s composition and is dedicated to his friend Toby Rosenthal, who facilitated the commission of Spring in the Alps from Jacob Stern. In excellent condition, Spring in the Alps comes to the Getty in the elaborate frame that the artist originally designed for it. It will be put on exhibition in the Museum’s West Pavilion on February 12th, alongside other works of art from 19th century Europe.