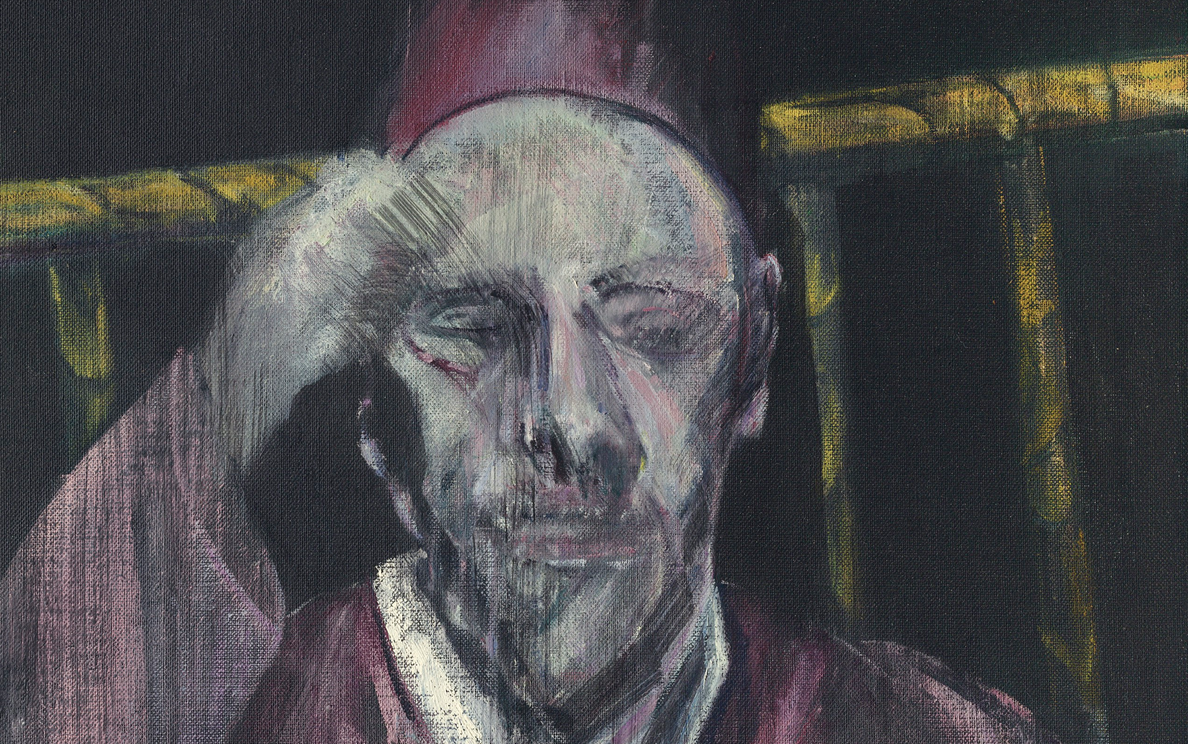 London – Francis Bacon’s Head with Raised Arm (1955, estimate: £7,000,000 – £10,000,000) will be unveiled for the first time in over half a century as part of Christie’s Post-War and Contemporary Art Evening Auction, a highlight of London’s Frieze Week auctions. Last exhibited in 1962 at the Galleria Civica d’Arte Moderna, Turin, the work was acquired by the present owners the following year, and has remained hidden from public view ever since. The work’s location was listed as ‘unknown’ in the most recent version of the catalogue raisonné published last year by Martin Harrison. Riddled with quiet introspection and human tension, it belongs to a group of nine surviving paintings depicting the then-incumbent, Pope Pius XII. With four held in museum collections, and a further on permanent loan, Bacon’s portraits of the living Pope are among his most profound. The work will be on view from 8 September, Christie’s Rockefeller Center, New York; 18 September, Christie’s Hong Kong; and 30 September 2017 at Christie’s King Street as part of the Post War and Contemporary Art Evening Auction that will take place on the 6 October 2017.

Francis Outred, Chairman and Head of Post-War and Contemporary Art EMERI: “Bacon’s Head with Raised Arm poses the question that would haunt Bacon for the duration of his career: how to paint the human figure in the age of photography. The camera’s ability to cast fiction as truth resonated with the fundamental tension that Bacon identified in religious and political figureheads: a conflict between public image and innate animal instinct. Evoking the works of Eadwaerd Muybridge, as well as anticipating Gerhard Richter’s blurred photo-paintings of the following decade, Head with Raised Arm speaks directly to this theme. Pius was the only living Pope that Bacon would ever look to capture and by hinting at the transience of a figure immortalized through the camera lens, Bacon lifts the veil on his humanity. Illustrated in the first catalogue raisonne created by Ronald Alley with Francis Bacon in 1964 and listed as 'whereabouts unknown' in the most recent version by Martin Harrison in (2016), this is a landmark moment, marking the reappearance of a major Bacon portrait after more than 50 years.”

The Pope’s face and arm flicker like moving images caught on camera, animated by a veil of rapid hairline striations. Combed vertically with a fine brush over layers of colour, the work demonstrates Bacon’s dialogue with photography in his bid to capture what he termed ‘the trail of the human presence’.  Rare for its closely-cropped depiction of the pontiff’s head and shoulders, the present work confronts its subject on a piercing, intimate scale. It is one of only two Popes executed in Bacon’s jewel-like 24-by-20-inch format, aligning it with his first small portrait triptych of 1953. Elected to the papacy in 1939, Pius’s reign had spanned the Second World War, famously inciting accusations of silence in the face of atrocity. As the Church and media sought to uphold his infallibility, the artist cast him as a fragile, flawed being, tortured by the weight of his grand station.

Pursued over nearly two decades, and numbering more than fifty canvases, Bacon’s Papal portraits are widely regarded as his finest achievements. These works were his first and most significant existential enquiries, and stand today among the foremost images of the twentieth century. ‘It’s true, of course, the Pope is unique’, he explained. ‘He’s put in a unique position by being the Pope, and therefore, like in certain great tragedies, he’s as though raised onto a dais on which the grandeur of this image can be displayed to the world’ (F. Bacon, quoted in D. Sylvester, The Brutality of Fact, London 1990, p. 26).