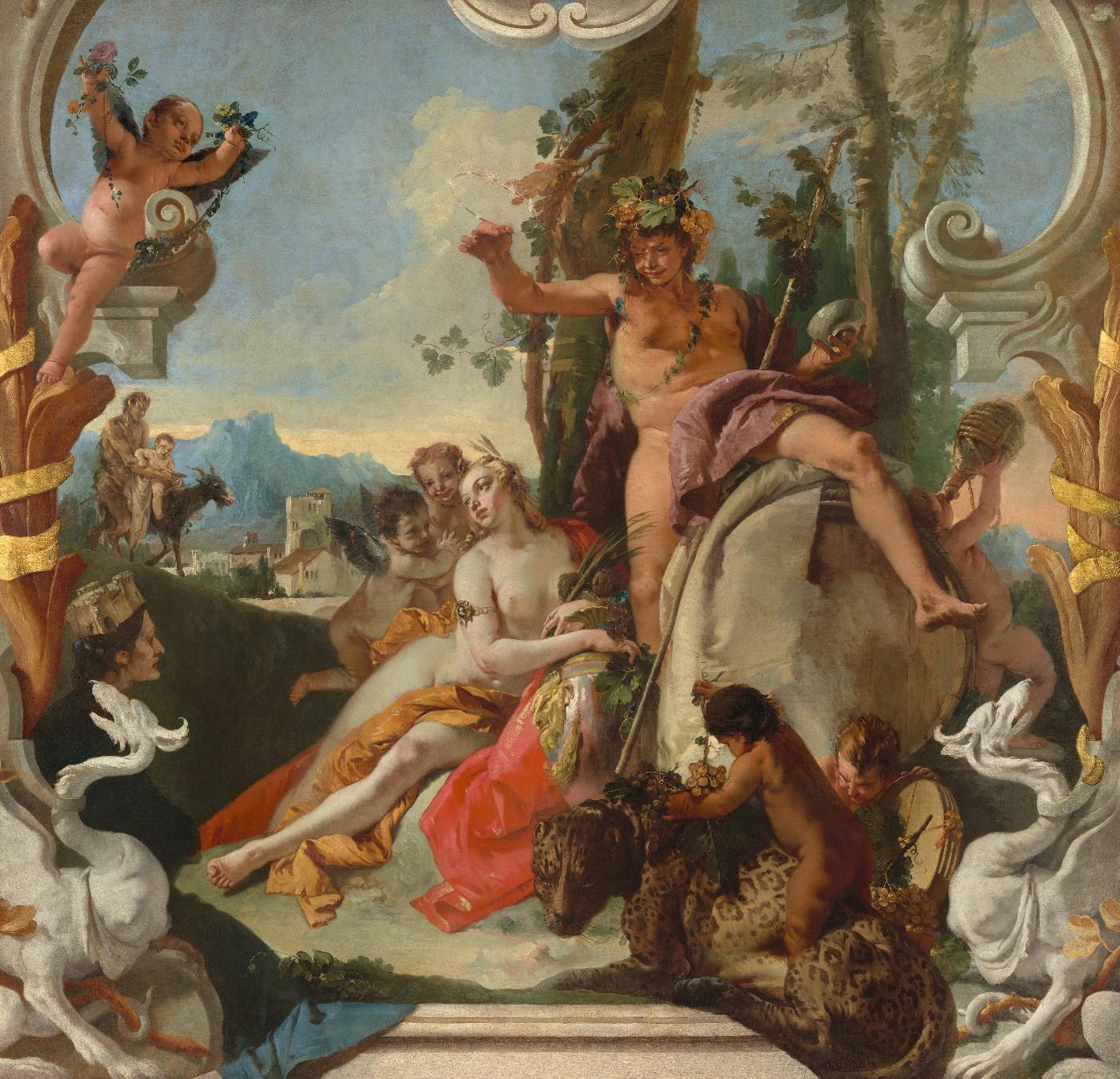 Following a four-year-long conservation treatment, Giovanni Battista Tiepolo's "Bacchus and Ariadne" (c. 1743/1745) will return to public view in the West Building of the National Gallery of Art, Washington, on June 14, 2018. The comprehensive restoration has revealed elements by the Venetian master hidden from view since the work was removed from its original location at the end of the 18th century. The dramatic results provide viewers with a new sense of the immense painting's appearance at the time of its creation.

"The conservation of this remarkable work reveals significant discoveries about Tiepolo's process and clues to the painting's original home," said Earl A. Powell III, director, National Gallery of Art. "This project also represents one of the many instances of rich collaboration between the Gallery's team of conservators, scientists, and curators, all leaders in their field."

"Bacchus and Ariadne" is believed to have been created to decorate the staircase of an unknown Venetian palace, only identified in a (now-lost) letter from 1764 by Tiepolo as the palace of "V.E." The painting was probably one of four works—only three of which are known to survive—that each depicted a natural element. "Bacchus and Ariadne" represents earth, "The Triumph of Amphitrite" (Gemäldegalerie Alte Meister, Dresden) represents water, and "Juno and Luna" (Sarah Campbell Blaffer Foundation, the Museum of Fine Arts, Houston) represents air. The location of the fourth painting—which likely depicted Vulcan, the god of fire, and his wife, Venus—is unknown. A smaller example by Tiepolo of the same subject at the Philadelphia Museum of Art does, however, give a sense of what the painting may have looked like. All three of the extant paintings are connected by similar architectural motifs that would have tied them to their original locations, such as stone volutes at the top corners and long-necked, griffin-like forms in the bottom left and right corners. These architectural elements were likely painted over when the works were removed from their original setting, which according to curatorial records was done by 1798.

The project's painting conservator, Sarah Gowen Murray, worked closely with colleagues in painting conservation, scientific research, and preventive conservation to treat the painting and conduct analysis of the work. Overpaint removal uncovered tall vertical leaves on the left and right sides of the composition. Infrared imaging—conducted by John Delaney, senior imaging scientist—and analysis of cross-section samples of those areas—examined and interpreted by Barbara Berrie, head of the scientific research department—indicated that the leaves were originally bound together by gold ribbons. A precedent for the ribbons was established in another work by Tiepolo, "Castigo dei Serpenti (The Scourge of the Snakes)" (1732–1735) at the Gallerie dell'Accademia in Venice. These findings, archived documentation images, and other works by the artist were then consulted to reconstruct the missing elements with inpainting.

Other discoveries made during the treatment include indications of significant compositional changes made by Tiepolo, suggesting that "Bacchus and Ariadne" may have been the first painting of the series. X-radiographs exposed curved forms at the lower-right corner extending beneath the griffin and the jaguar—perhaps initial attempts by the artist to incorporate the composition into the work's surrounding architecture. 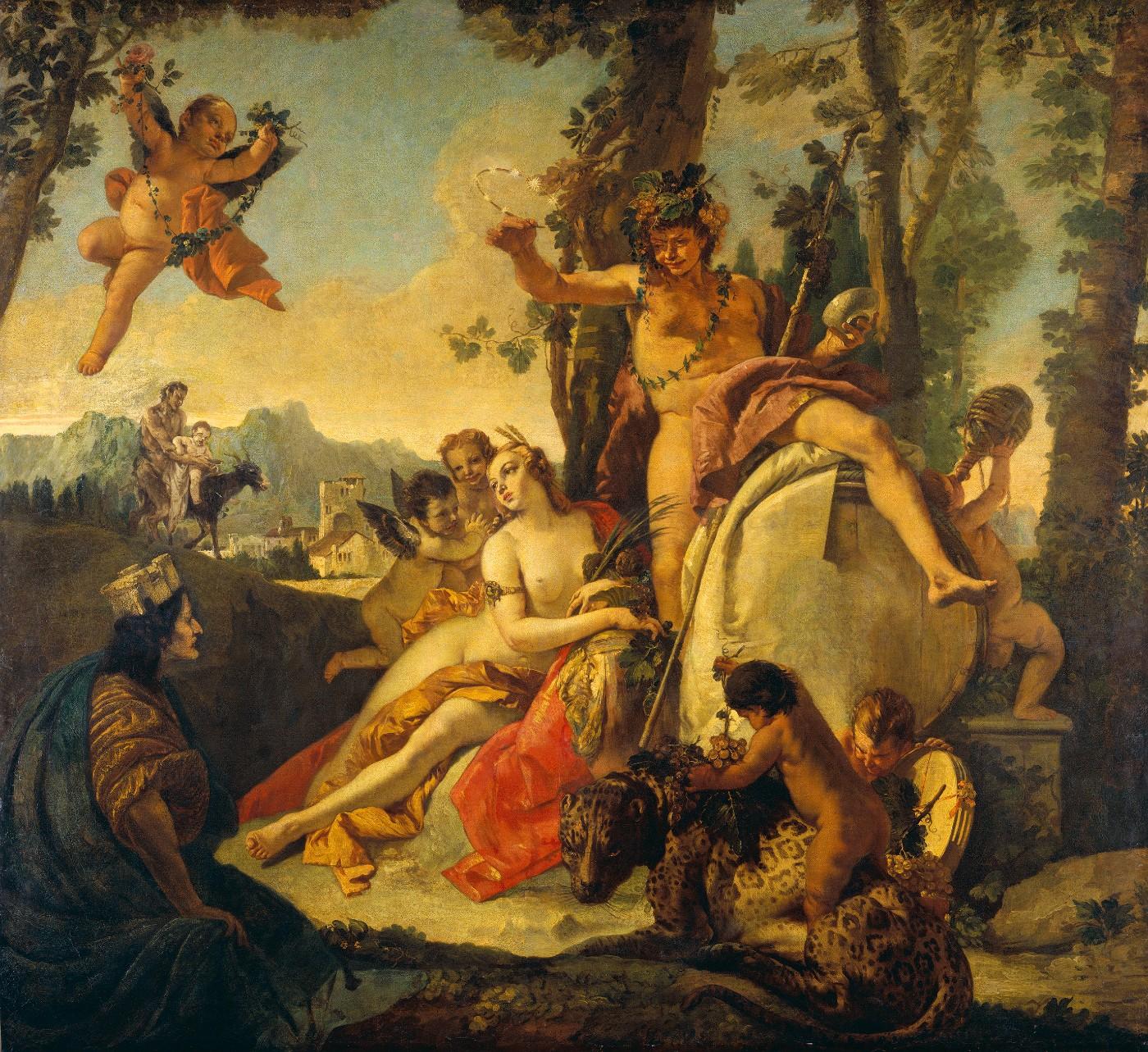 Tiepolo's painting magnificently depicts the moment before Bacchus, the god of wine, crowns Ariadne after falling in love with her. According to the myth, Bacchus discovered Ariadne on the shore of the island of Naxos where she was left behind by her lover, Theseus. Following this scene, Ariadne ascended to Mount Olympus, gaining immortality. Tiepolo's rendering of the myth shows Bacchus sitting unsteadily atop a barrel with the glittering crown in hand. Bacchus is surrounded by revelers holding jugs of wine and grapevines, representing the fecundity of earth, while one of the jaguars that led his chariot rests beneath him. The wheat Ariadne wears in her hair and reeds held in her hand further symbolize the earth.

Following its removal from its original setting, Bacchus and Ariadne remained in private collections in Italy and Vienna before being sold in the late 1920s to William Robert Timken and Lillian Guyer Timken. The painting came to the Gallery in 1960 as part of the Timken Collection. Oliver Tostmann, now curator of european paintings at Wadsworth Atheneum, Hartford, contributed significantly to the understanding of "Baccchus and Ariadne" and its counterparts when he was a Joseph McCrindle Fellow and then Andrew W. Mellon Fellow at the National Gallery from 2007 to 2011.

Conservation and Science at the National Gallery of Art

The conservation division of the National Gallery of Art is responsible for the preservation and study of works of art in the Gallery's collection. The division comprises departments that specialize in the treatment and care of paintings, works on paper, objects, photographs, textiles, and frames. Departments that support the mission of the entire division are preventive conservation, scientific research, analytical imaging, and administration.