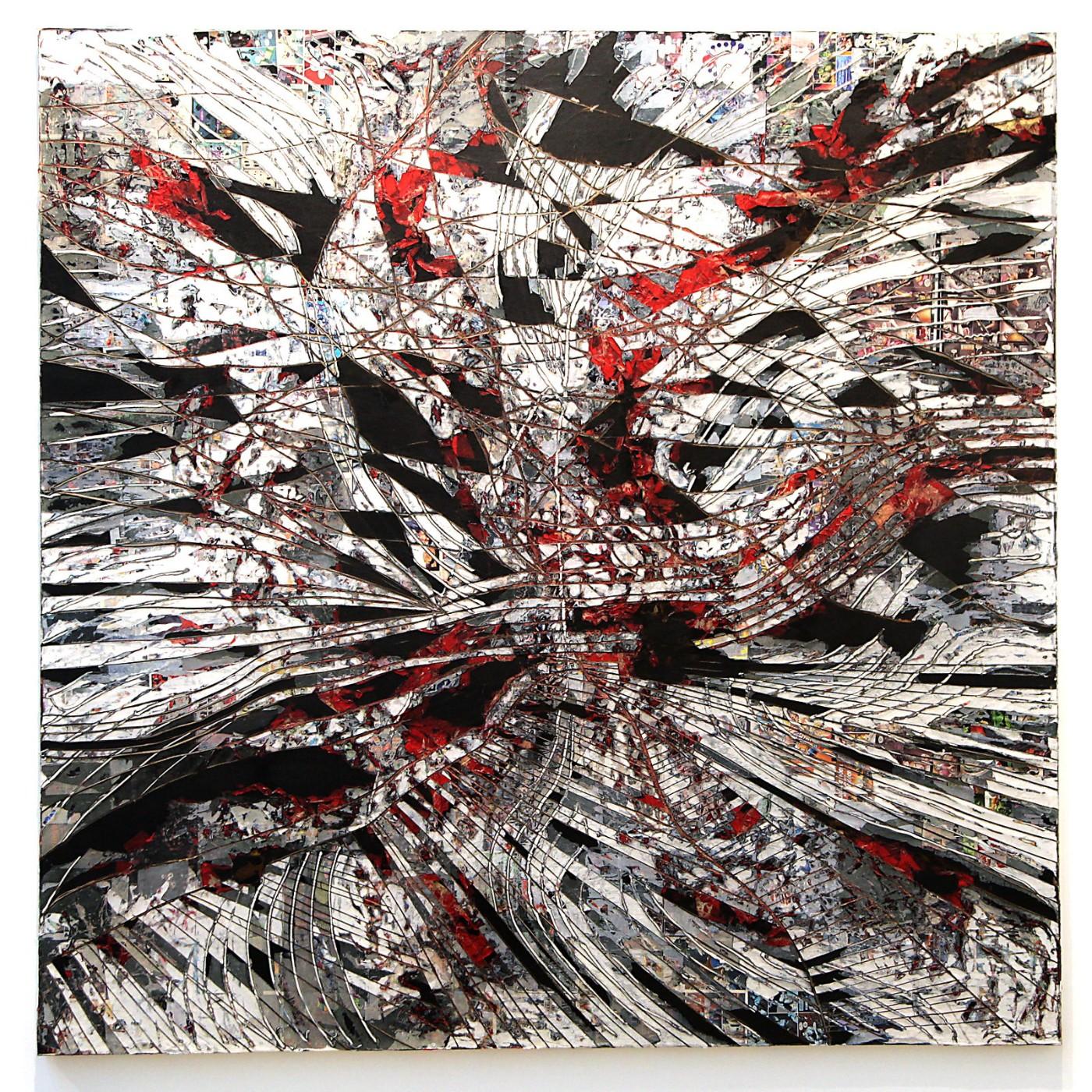 LOS ANGELES—The Broad announced major new acquisitions for its collection, including Helter Skelter I, 2007, a massive, mural-scale painting by the Los Angeles-based artist Mark Bradford, and Bradford’s recent work, I heard you got arrested today, 2018. The museum also acquired Longing for Eternity, 2017, by Yayoi Kusama, adding a second of the artist’s iconic Infinity Mirror Room installations to its collection.

The Broad collection also added Untitled, 2017, a new painting by Kerry James Marshall and the museum’s first work by the artist, and After Russell Lee: 1–60, 2016, a major 60-part photographic work by Sherrie Levine.

Longing for Eternity will debut to the public on March 17, while I heard you got arrested today and After Russell Lee: 1–60 will go on view this summer. In addition to these, The Broad has acquired works by Sam Francis, Jasper Johns, Jeff Koons, Sharon Lockhart, Robert Longo, Julie Mehretu, Lari Pittman, Thomas Struth, Jeff Wall and Jonas Wood.

“Mark Bradford’s work has been increasingly central to the Broad collection over the past 12 years, and we are proud to acquire Helter Skelter I, which is among the most significant works he has ever produced. Exemplifying Bradford’s ‘social abstraction,’ Helter Skelter I is a masterpiece that references a chilling period in Los Angeles history—cult leader Charles Manson’s malevolent obsession with inciting a race war in the late 1960s, which he called ‘Helter Skelter,’” said Joanne Heyler, founding director and chief curator of The Broad.

Heyler continued, “Helter Skelter I, like many of Bradford’s works, confronts the economic and social structures that perpetuate issues of power, race and crime. It is a powerful work that deepens our Bradford holdings, and will become a centerpiece in our galleries.”

Helter Skelter I marked a pivotal shift in Bradford’s artistic practice towards increasingly monumental and decentralized works reflective of his mature style. The painting’s immensity reflects the sprawl of Los Angeles, while fragments of vivid color, text and imagery—shards of black and bursts of neon colors, words like “KING” and “CANDY,” a grinning black skull, an obliterated female face—break through a silvery surface, capturing the kinetic energy of a city thrumming with chaos, confusion, anger—even insanity.

I heard you got arrested today, 2018, emerges on the heels of Bradford’s successful representation of the United States in the 2017 Venice Biennale. A blizzard of lines and textures, the painting speaks to other works in the Broad collection, especially Bradford’s (Untitled) A.K.A. Gwen, 2005–6, which present the self as embattled inside of systems beyond one’s control—in this case, the systemic racism of mass incarceration.

With Kerry James Marshall’s Untitled, 2017, the museum adds a new artist to the Broad collection whose work plumbs social and political topics. Heyler noted, “This painting by Kerry James Marshall brings into the collection a significant American artist whom we have long admired, and whose work provokes important dialogue about how the black figure and the black artist have been portrayed and received in—or left out of—Western art history.”

Untitled features two men studying an ambiguous field of color, as though during a critique or a studio visit. The expanse of color mines the tradition of color field painting, specifically the Washington Color School, in its suggestion of the stained washes of Morris Louis or the hanging dyed canvases of Sam Gilliam. In his work, Marshall has long portrayed the artist in the studio, inserting himself and other figures from the African American community into the long tradition of artistic self-portraiture. Untitled affirms the artist in society universally, while also remedying the dearth of African Americans depicted in that role.

The Broad’s acquisition of Longing for Eternity adds a second work by the groundbreaking Japanese artist Yayoi Kusama, who emerged during the Vietnam era and has now become one of the world’s most prominent artists.

“We were thrilled to host the Yayoi Kusama: Infinity Mirrors special exhibition last fall, which traced the history and diversity of Kusama’s Infinity Mirror Rooms. The new Infinity Mirror Room in our collection will offer The Broad’s visitors a deeper understanding of an artist who has resonated profoundly with them since the museum opened more than two years ago,” said Sarah Loyer, assistant curator.

In contrast to the physical immersion of The Broad’s first Infinity Mirror Room (The Souls of Millions of Light Years Away, 2013), Longing for Eternity enables viewers to experience visual immersion. A key theme within Kusama’s artwork is the celebration of life and its aftermath, and Longing for Eternity continues her six-decade-long exploration of this idea. Rather than entering a room, viewers peer through three round porthole-like windows into a dazzling LED-light-filled chamber lined with mirrors inside and out that reflect its surroundings and its interior. The viewer experiences what the artist refers to as “self-obliteration”: losing the boundaries between oneself and the surrounding world, and becoming radically connected to others. The Souls of Millions of Light Years Away and Longing for Eternity complement each other, creating two distinct phenomenological experiences that provoke a sense of boundlessness and transcendence through extreme repetition.

Heyler concluded, “We are proud to have added these works, which are such major achievements, to the Broad collection. Representing a wide range of approaches and perspectives, from artists like Mark Bradford and Julie Mehretu, who continue to spark dialogue around social and political topics, to artists who have been centerpieces of the collection for years, such as Jasper Johns and Sam Francis, these additions extend our long history of collecting in depth, as well as our commitment to strengthening the public’s understanding of the full arc of an artist’s ideas.”

After Russell Lee: 1–60, 2016, operates in the legacy of Sherrie Levine’s earlier Walker Evans series. At the height of the art world’s interest in explorations of appropriation and originality, in 1981 Levine reprinted and intervened in the work of Evans, “re-presenting” it as her own in a new and updated context. Russell Lee was a contemporary of Evans and most famous for a government-funded Farm Security Agency photograph series taken in Pie Town, New Mexico, in 1940, a grouping now owned by the Library of Congress. Levine’s work re-authors 60 photographs from Lee’s series, creating new meaning in these Great Depression-era images of rural life.

Why Then Opened II, 1962–63, was painted when Sam Francis was still recovering from a recurrence of tuberculosis that left him bedridden for almost a year. After the illness, Francis painted primarily in blue and worked with biomorphic patterns, mining the forms of artists like Jean Arp, Henri Matisse and Yves Tanguy. Why Then Opened II came at the end of this period and represents a return to color, which Francis would proceed to explore for decades. With this acquisition, the Broad collection now holds 10 works by Francis.

Congress, 2003, the fifth work by Julie Mehretu in the collection, imagines a large gathering of nations as a torrent of flags looming over a perspectival series of lines receding into space. The painting has been likened to a gate of a city, or perhaps the entrance into a sports stadium.

Neutral Buoyancy Lab, JSC, Houston, 2017, returns to Thomas Struth’s early interest in teasing layers of historical and architectural meaning from cityscapes, this time showing a futuristic city (an astronaut training module) underwater, and underneath a space that recalls a modernist plaza (complete with a Corbusier-like office on the left).

Other recent acquisition highlights include Jeff Wall’s important Fieldwork. Excavation of the floor of a dwelling in a former Sto:lo nation village, Greenwood Island, Hope, B.C., August, 2003. Anthony Graesch, Dept. of Anthropology, University of California at Los Angeles, working with Riley Lewis of the Sto:lo band, 2003, photographed near Vancouver, Canada, on an actual archaeological dig.

Robert Longo’s large charcoal drawing Untitled (Black Pussy Hat in Women’s March), 2017, shows a city street filled with marchers captured from the perspective of a demonstrator on the ground. The result is at once dark, rendering the hat in black rather than the iconic pink, and hopeful, positioned toward a bright future.

The painting Blackwelder Self-Portrait, 2017, which pictures Jonas Wood on his studio’s garden patio, is the most recent purchase of the seven works by Wood in the collection.

Find out how to see Yayoi Kusama's Infinity Rooms at the Broad.
Tags
The Broad