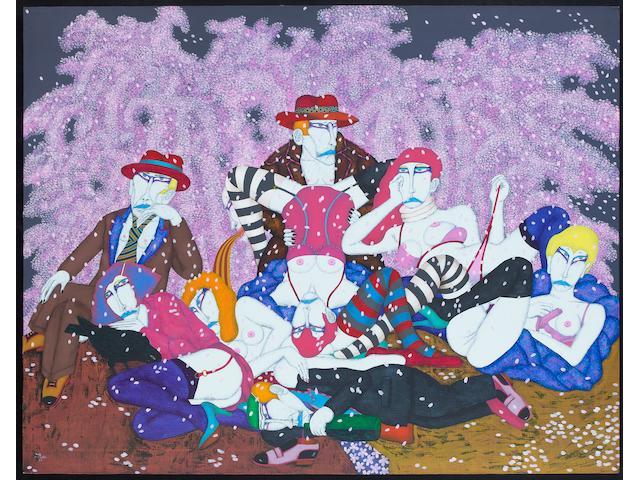 Bonhams New York is pleased to present a special curated exhibition of one of Japan's most beloved artists of the 20th Century, Key Hiraga, The Spirit of Burai: The Life and Times of Key Hiraga, on view in our Madison Avenue galleries from Thursday 5th April to Friday 20th April, 2018.

The career of Key Hiraga represents one of singular achievement in the world of Japanese modern and contemporary art. Born in Tokyo and raised in Morioka, the young artist from an early age internalized a love for nightlife and the raffish quarters of society, a fascination that drove his life and his art until his last days. Hiraga came to national and international attention in the mid-1960s when one of his works was included in the ground-breaking New Japanese Painting and Sculpture exhibition at MoMA, which toured eight US museums between 1965 and 1967.  It was also in 1965 that Hiraga won the New Artist Prize at the National Exhibition and the National Young Artists Grand Prix, which included a scholarship to study in Paris and which he took up in 1966. His move to Paris was a crucial step in his career as the Pigalle district of Paris became an important source of inspiration for his works.

His earliest monochromatic explorations have been compared with the works of Jean Dubuffet, but his wry, ironic and playful forays into Japan's nightlife suggests a kind of spiritual affinity with Toulouse-Lautrec.  His inspirations were not merely artistic, and he was affiliated with the literary movement, the Buraiha group, a loose group of authors also knows as "The Decadents" who rejected both pre-War literary traditions and the imposition of American social values under post-War occupation.

This exhibition features rare drawings from his precocious, generative early years, iconic works from the 1960s and 1970s, as well as a selection of important late paintings. Through his works on paper, we see Hiraga discovering themes, images and styles that would define his career: the anxious male avatar who would become his alter-ego (sometimes known as Mr. K, elsewhere known as Mr. H.), the interlocking forms and overlapping narratives, the compartmentalization of the composition, and the apparent influence of European abstraction. We see these early thematic and stylistic choices come to life in his breathtaking canvases.

His latter works from the 1980s and 1990s mark an aesthetic refinement through the incorporation of enhanced iconography connected to the artist's bond to flamboyant Japanese traditions as well as his intrinsic Burai spirit. With The Spirit of Burai: The Life and Times of Key Hiraga, the exhibition brings several works of this period to New York and further discovers the singular and outstanding nature of his large masterpieces.