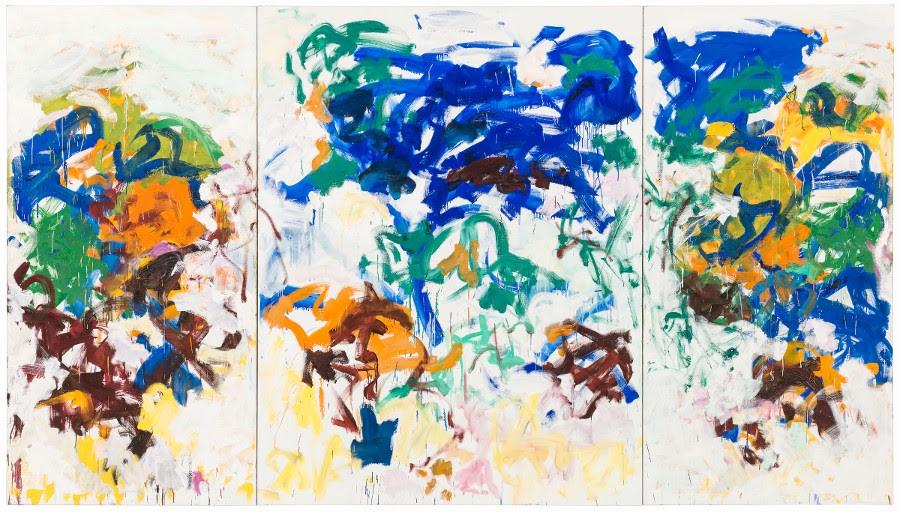 BALTIMORE, MD (June 14, 2018)—The Baltimore Museum of Art (BMA) and San Francisco Museum of Art (SFMOMA) are co-organizing a comprehensive retrospective of American artist Joan Mitchell. The exhibition will bring together a breathtaking array of paintings, drawings, and prints from public and private collections in the U.S. and Europe that together reveal Mitchell’s inner landscape—experience, sensation, memory—expressed with an intensely athletic grace. Mitchell’s acclaimed masterworks will be joined by rarely seen paintings and works on paper, bringing to life the artist’s varied creative processes and the intense experiences they embody, inviting the viewer to experience the trajectory of her career. The exhibition is co-curated by Katy Siegel, BMA Senior Programming & Research Curator and Thaw Chair of Modern Art at Stony Brook University, and Sarah Roberts, SFMOMA Andrew W. Mellon Associate Curator of Painting and Sculpture. It will open in Baltimore in April 2020, travel to San Francisco in September 2020, and then move to the Solomon R. Guggenheim Museum in New York in February 2021.

“Joan Mitchell’s independent sensibility, fusing feeling and the natural world through a passionate physicality, make her a riveting subject for the present moment,” said Christopher Bedford, BMA Dorothy Wagner Wallis Director. “I am proud that Baltimore will play a role in celebrating an artist whose staggering accomplishments and historical importance are only beginning to be fully recognized.”

“The time is right for a thoughtful reconsideration of Mitchell’s work and her impact on postwar painting on both sides of the Atlantic,” said Neal Benezra, the Helen and Charles Schwab Director of SFMOMA. “SFMOMA’s holdings include five exceptional paintings from Mitchell’s early years in New York and the last years of her life in Vétheuil. Her stunning 1989 painting Bracket has welcomed visitors to our fourth floor since our reopening in 2016, and we are proud that this important retrospective will be the first special exhibition presented in our Fisher Collection galleries.”

The exhibition will explore the full arc of Mitchell’s artistic practice—from her exceptional New York paintings in the early 1950s to the majestic, large-scale multi-panel works made in France later in her career. Additionally, the exhibition will feature transitional paintings that unfold her process, and emphasize for the first time Mitchell’s exquisite small paintings, pastels, and works on paper. The presentation will feature entire suites focused on a single subject, such as Mitchell’s brilliant Sunflower paintings, while a selection of projects created with and for writers like Frank O’Hara and Jacques Dupin will underscore the role of poets and poetry in her life and work.

Among the exhibition highlights are her vibrant response to New York City, East Ninth Street (1956); the abstracted and lush French landscapes Mon Paysage(1967) and No Rain (1976); the grand three-panel painting Bracket (1989); plus a selection of her intensely declarative late paintings from 1991-92. The Joan Mitchell Foundation Archives will also lend a selection of the artist’s sketchbooks and archival photographs, animating both her process and her daily life.

“The exhibition and catalogue will be based on deep primary research and will present new scholarship on Mitchell's life and her extraordinary body of work. We also are convening emerging and established scholars, curators, conservators, writers, and artists to reconsider Mitchell's role in the postwar artistic interchange between the U.S. and France, and to study intensively her materials and process,” said curators Sarah Roberts and Katy Siegel.

The accompanying catalogue will provide a sweeping scholarly account of the artist’s career, stressing its transnational nature and the important role that her life in France played in the evolution of her oeuvre. The catalogue will present new research on Mitchell’s materials and methods, and close studies of her relationships with peers and friends, especially artists, poets and musicians. This volume will be the first major scholarly publication on Mitchell in decades, offering a range of voices that frame her in relation to recent historical discourse.

Joan Mitchell
Joan Mitchell (1925–1992) was an American artist whose career spanned more than four decades in the U.S. and France. Best known for her large, abstract oils on canvas, Mitchell also created smaller paintings, as well as an extensive body of works on paper and prints. Born in Chicago and educated at the Art Institute of Chicago, Mitchell moved to New York in 1949. In 1955, she began splitting her time between Paris and New York, before moving permanently to France in 1959. In 1968, Mitchell moved from Paris to Vétheuil, a small village northwest of the city, while continuing to exhibit her work in Paris, New York, and around the world. It was in Vétheuil that Mitchell began regularly hosting artists at various stages of their careers, providing space and support to develop their art. When Mitchell passed away in 1992, her will specified that a portion of her estate should be used to establish a foundation to directly support visual artists.

THE BALTIMORE MUSEUM OF ART
Founded in 1914, The Baltimore Museum of Art is a major cultural destination recognized for engaging diverse audiences through dynamic exhibitions and innovative educational and community outreach programs. The BMA’s internationally renowned collection of 95,000 objects encompasses more than 1,000 works by Henri Matisse anchored by the famed Cone Collection of modern art, as well as one of the nation’s finest holdings of prints, drawings, and photographs. The galleries showcase an exceptional collection of art from Africa; important works by established and emerging contemporary artists; outstanding European and American paintings, sculpture, and decorative arts; significant artworks from China; ancient Antioch mosaics; and exquisite textiles from around the world. The 210,000- square-foot museum is also distinguished by a grand historic building designed in the 1920s by renowned American architect John Russell Pope and two beautifully landscaped gardens featuring an array of 20th-century sculpture. The BMA is located in Charles Village, three miles north of the Inner Harbor, and is adjacent to the main campus of Johns Hopkins University. General admission to the BMA is free so that everyone can enjoy the power of art.

SAN FRANCISCO MUSEUM OF MODERN ART
SFMOMA is dedicated to making the art for our time a vital and meaningful part of public life. Founded in 1935 as the first West Coast museum devoted to modern and contemporary art, a thoroughly transformed SFMOMA, with triple the gallery space, an enhanced education center and new free public galleries, opened to the public on May 14, 2016. In its inaugural year, the expanded museum welcomed more than 1.2 million visitors.