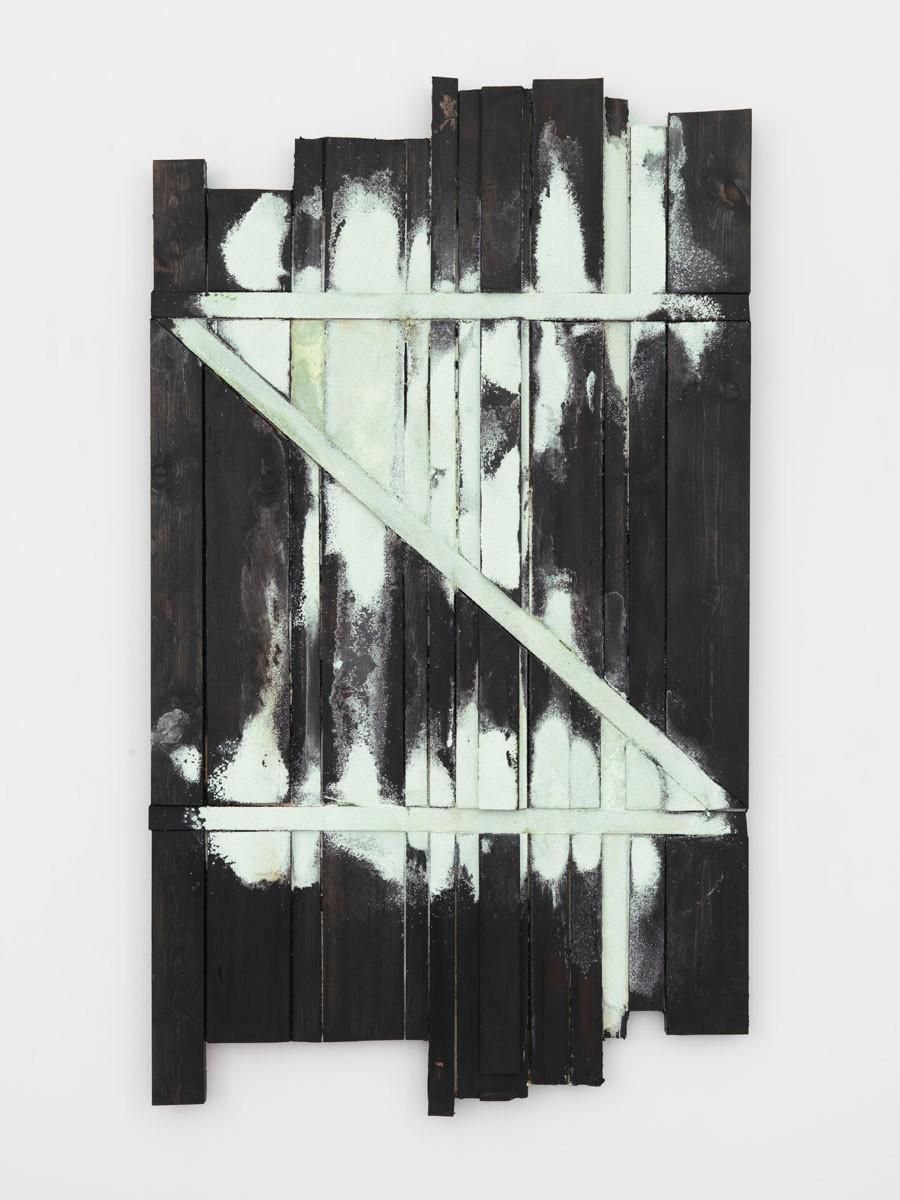 Courtesy of the artist and Marianne Boesky Gallery, New York and Aspen.

(Berkeley, CA) February 7, 2018—The UC Berkeley Art Museum and Pacific Film Archive (BAMPFA) launches the fortieth anniversary of its MATRIX Program—which introduces Bay Area audiences to exceptional voices in contemporary art—with an exhibition of work by Jay Heikes, the Minneapolis-based artist whose practice explores the interplay between borders, music, and material discovery. Jay Heikes / MATRIX 269is the first museum presentation of a new series of works Heikes created during a 2017 residency in Marfa, Texas, which draws inspiration from the West Texas desert and the invisible presence of the nearby Mexican border.

The son of a chemist, Heikes likens his practice to a form of alchemy, and his work often evokes a sense of curiosity about the transformation of material objects. Heikes began his career as a guitar player, and music remains integral to his practice, which also encompasses drawing, painting, sculpture, video, and other forms. Two drawings from Heikes’s Music for Minor Planetsseries, which references the visual aesthetics of musical notation and galactic constellations, are included in his MATRIX presentation. A nearby sculpture installation, also titled Minor Planets, extends the visual metaphor of heavenly bodies with earthbound spherical objects made from such alchemically significant materials as bismuth, Gladstone ore, and lignum vitae.

Jay Heikes / MATRIX 269 also includes a selection from the Z series—a collection of paintings that reference the last letter of the alphabet through such eclectic materials as salt, ink, fiberglass, acorn husks, and rubber snakes. The series alludes to Heikes’s interest in the end of language and its relationship to the passage of time, a recurring theme in the artist’s practice. A different kind of visual metaphor is suggested by two large-scale copper fences featured in the exhibition. Inspired by Heikes’s Marfa residency, the fences conjure the metaphorical weight of artificial borders cutting across a vast desert landscape.

“In addition to activating a reflection on our cultural moment, the works in MATRIX 269 highlight Heikes’s commitment to the material properties of the art object and his probing of potential form,” said Apsara DiQuinzio, BAMPFA’s curator of modern and contemporary art and Phyllis C. Wattis MATRIX Curator, who organized Jay Heikes / MATRIX 269. “Together, the works embody the artist’s longing for transcendence amid the deluge of negative media in the wake of the 2016 presidential election, and the attendant demonizing rhetoric of the Other.”

As the first MATRIX artist of 2018, Heikes joins a distinguished roster of contemporary artists who have presented work through the program over the past forty years, including Jean-Michel Basquiat, Louise Bourgeois, James Lee Byars, Sophie Calle, Jay DeFeo, Willem de Kooning, Juan Downey, Eva Hesse, Sol LeWitt, Shirin Neshat, Nancy Spero, Cecilia Vicuña, Andy Warhol, and many others. His exhibition is the first of multiple MATRIX exhibitions at BAMPFA throughout the program’s fortieth anniversary year; for details about other upcoming MATRIX shows and related programs, visit bampfa.org.

In conjunction with the opening of Jay Heikes / MATRIX 269, Heikes presents an artist’s talk at BAMPFA on Wednesday, February 14 at 6 p.m.

Jay Heikes / MATRIX 269 is organized by Apsara DiQuinzio, curator of modern and contemporary art and Phyllis C. Wattis MATRIX Curator, with Matthew Coleman, curatorial assistant. The MATRIX Program is made possible by a generous endowment gift from Phyllis C. Wattis and the continued support of the BAMPFA Trustees.