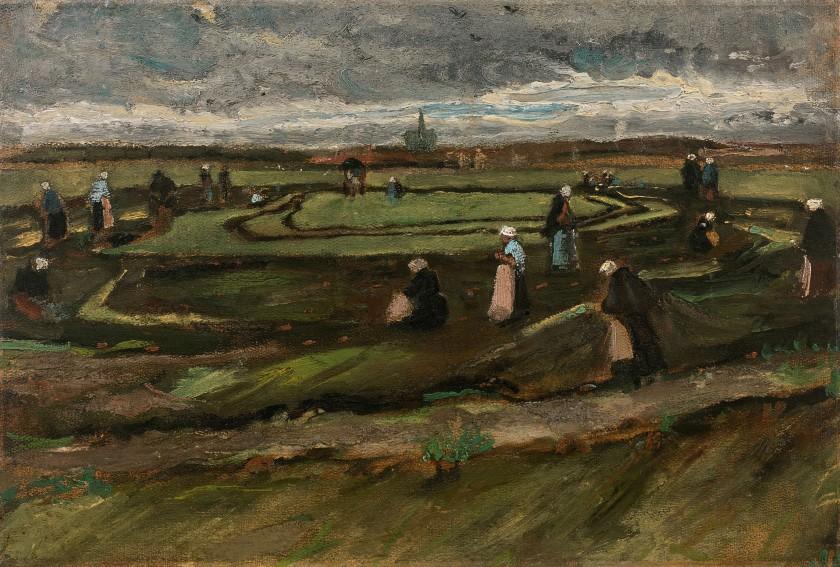 Paris – For the first time in over 20 years, a painting by Vincent van Gogh, one of the most emblematic artists of the 20th century was offered at auction in Paris. "Raccommodeuses de filets dans les dunes" was sold for €7,065,000/ $8,266,050 (estimate €3 – 5 M), by Artcurial, under the gavel of Francis Briest. An American collector placed the winning bid following an arduous battle.

The work of art, of museum quality, spent the last 8 years on the walls of the prestigious Van Gogh Museum in Amsterdam and represents an emblematic landscape of the early days of Vincent van Gogh’s work from his period Dutch. Painted in August 1882, it carries with it all the premises of the pictorial revolution of the author of "La nuit étoilée." In this oil painting, we clearly note the early work of Van Gogh on skies, with the dynamic treatment of the grey cloud-laden sky and also the appearance of the Crow that he will then use in the iconic "Champ de blé aux corbeaux" painted in Auvers-sur-Oise in 1890, only 8 years later. But beyond that, we can guess the appearance of a form of abstraction, with the solid colour blocks identified by the black concentric lines of the nets.

Although Vincent van Gogh created this naturalist landscape at the age of 29 close to The Hague, it is of a crucial importance in his artistic development. In a letter to his brother Theo, Vincent Van Gogh describes the work and explains: "in nature, things of this kind affect me the most. " This painting is masterful. Collectors, well aware of this, enabled Artcurial to establish the new world record for a Vincent Van Gogh landscape of the Dutch period.