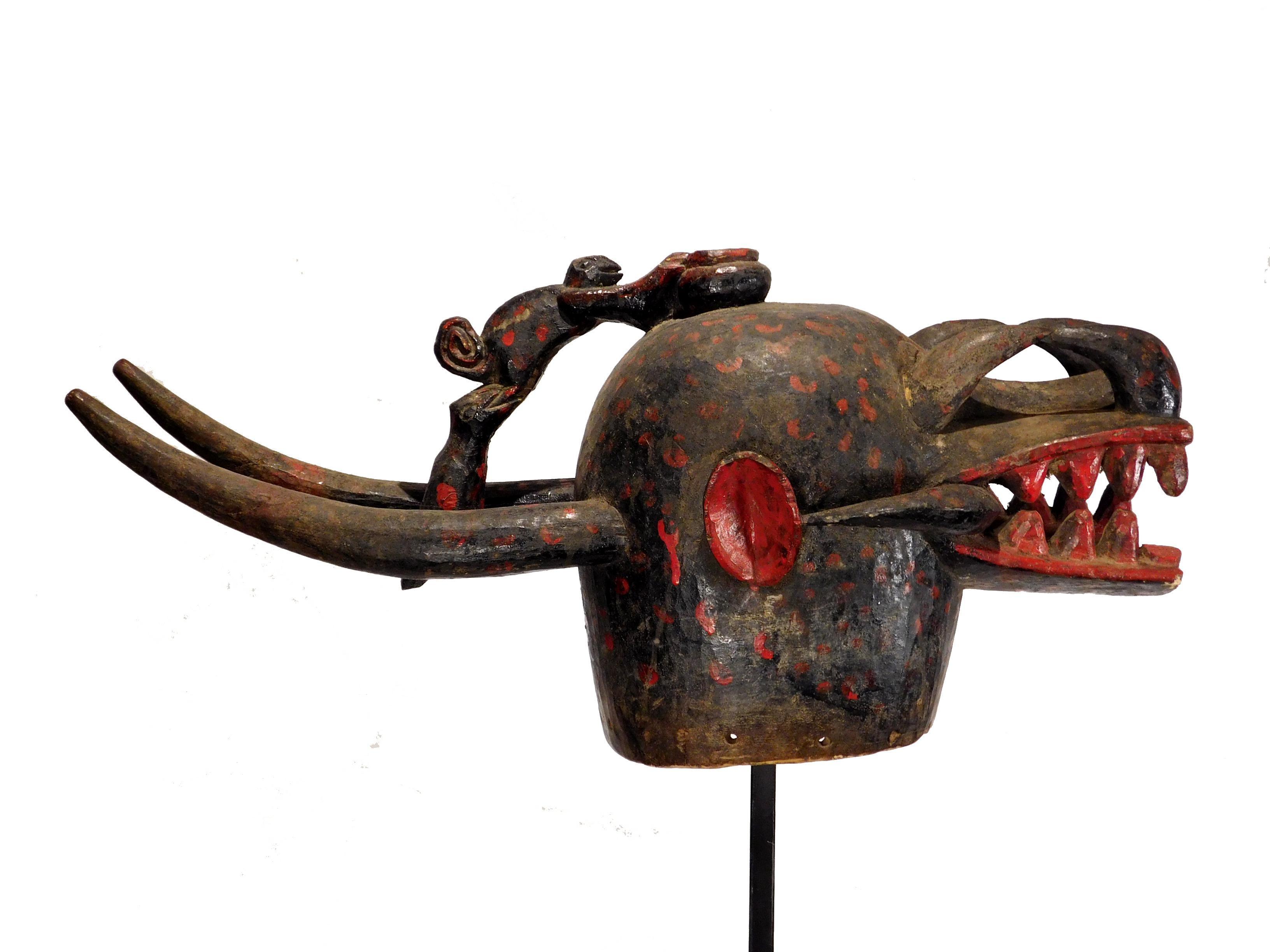 Lot 1: Senufo Kulonugo fire spitter, a massive wood carving covered with black paint and adorned by additions of red paint. Atop the head is a carved offering bowl. Estimate: $2,500-$5,000.
View a video of this lot here.

500 GALLERY IS SHOWCASING ALL 60 LOTS IN ITS TRIBAL ART AUCTION IN THE ROUND, WITH INDIVIDUAL YOUTUBE VIDEOS FOR EACH – AN INDUSTRY FIRST

The firm uses a rotating pedestal for showcasing sculptures that are best seen in the round, but the inspiration for adding videos to their online catalogs came from a YouTube jewelry video.

FRANKLIN, Mass. – Bruce Wood was surfing the Internet one day and found himself watching a video of sparkling earrings twirling around in a jewelry advertisement. Then it hit him: “In our gallery, we have a rotating pedestal for showcasing sculptures that are best seen in the round,” he said, “but the inspiration for adding videos to our online catalogs came from that jewelry video.”

Wood is the owner of 500 Gallery in Franklin, an auction house that specializes in fine art originals and attributions. It is about to make its initial foray into African tribal art with the first in a series of auctions planned for Wednesday, September 30th. The sale is online-only so, of course, showing each item in its best possible light involved taking crisp, multiple photos per lot.

But watching that jewelry video sparked a thought. “It occurred to me that simple videos would give people a great experience of the three-dimensionality of sculptures, and help them make sense of all the detailed photos – front, back, sides, etcetera – in the catalog listings,” Wood said. I made a few videos of some of my favorite tribal art pieces and popped them onto YouTube.” 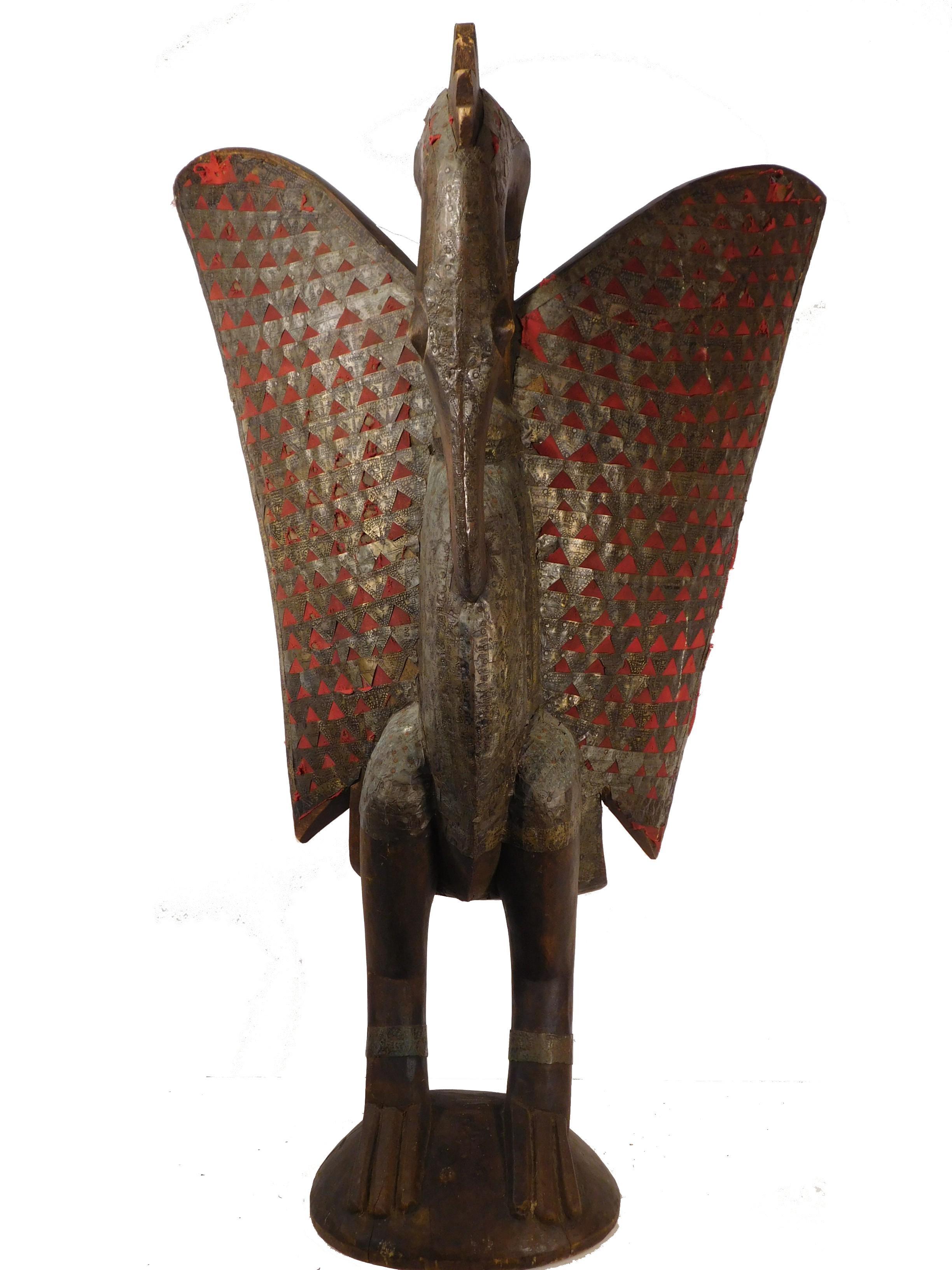 Wood made a page of videos for the website (www.500Gallery.com), but said, “Aside from listing the YouTube URL and asking viewers to copy and paste it into their Internet browser, there was no way to incorporate these lovely videos into each catalog listing.  Luckily, we approached our software developer and he made it all possible. Now each page of the catalog has an embedded video that can be easily clicked and viewed. All 60 lots have their own video.”

Wood said as far as he knows, his is the first auction house to offer rotating videos for all the lots in a single sale. “Especially in the tribal sculpture market, being able to show an object in glorious 3-D is unheard-of,” he commented, adding, “I can't wait for holographs to be available.”Seeing the light play across the large metal-clad wings of the Senufo hornbill sculpture (Lot 2), while their span rotated to fill the screen was “a magical experience,” Wood said. The hornbill, made in the mid-20th century by the Senufo People of Africa’s Ivory Coast, is hand-carved from a solid piece of wood and decorated with red fabric under a chased and embossed brass metal overlay. Impressive at 43 ½ inches tall, it has an estimate of $5,000-$10,000. 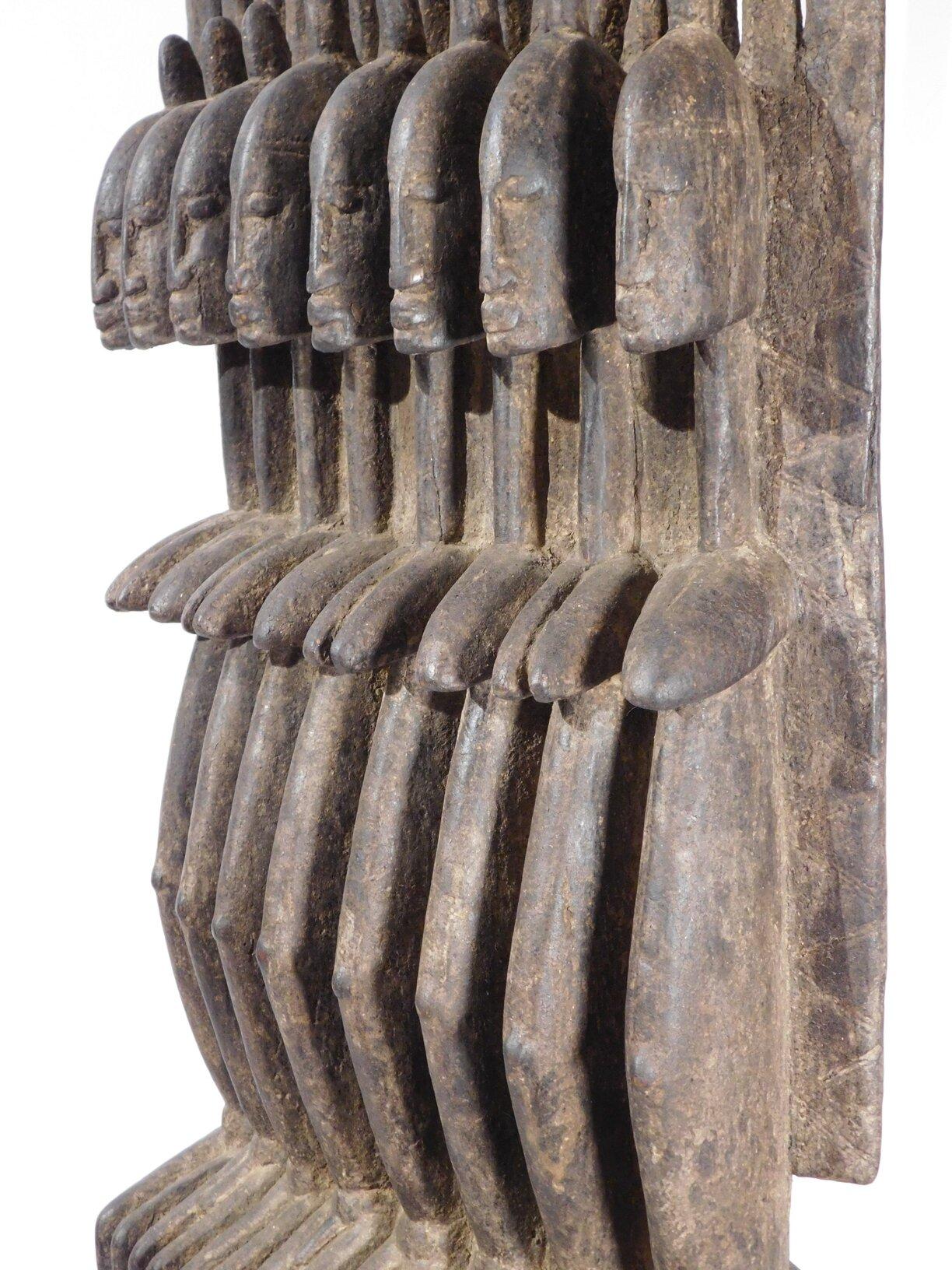 The Dogon marital group (Lot 5) also revealed an interesting play of light when viewed on a rotating pedestal. “The rows of arms and legs which appeared solid from some angles, turned to show the background illumination filtering through the comb-like spaces between them,” Wood observed. The marital group (Nomos), from the Dogon People of Mali, depicts a seated group of eight hermaphroditic figures, with alternating male and female attributes (est. $30,000-$60,000).

Videos of the masks presented a different experience. “The Senufo Kulonugo fire spitter (Lot 1) showed off its dynamic appearance by alternately appearing narrow and unassuming, then filling the screen with enormous horns and bared teeth,” Wood said. The massive wood carving is covered with black paint and adorned by additions of red paint. Atop the head is a small carved offering bowl held in the extended arms of a chameleon (est. $2,500-$5,000).

The war mask from the We/Guere people of the Ivory Coast (Lot 19) gave the impression of being both weightless and heavy on the video. “Its cluster of pointed, curling animal horns are seemingly writhing outward from the rough-hewn mask’s thick carved wood block,” Wood remarked. The mask, fashioned from wild animal horns and cloth over carved wood, with a heavy patina from libations, is 15 inches tall and carries an estimate of $1,500-$3,000. 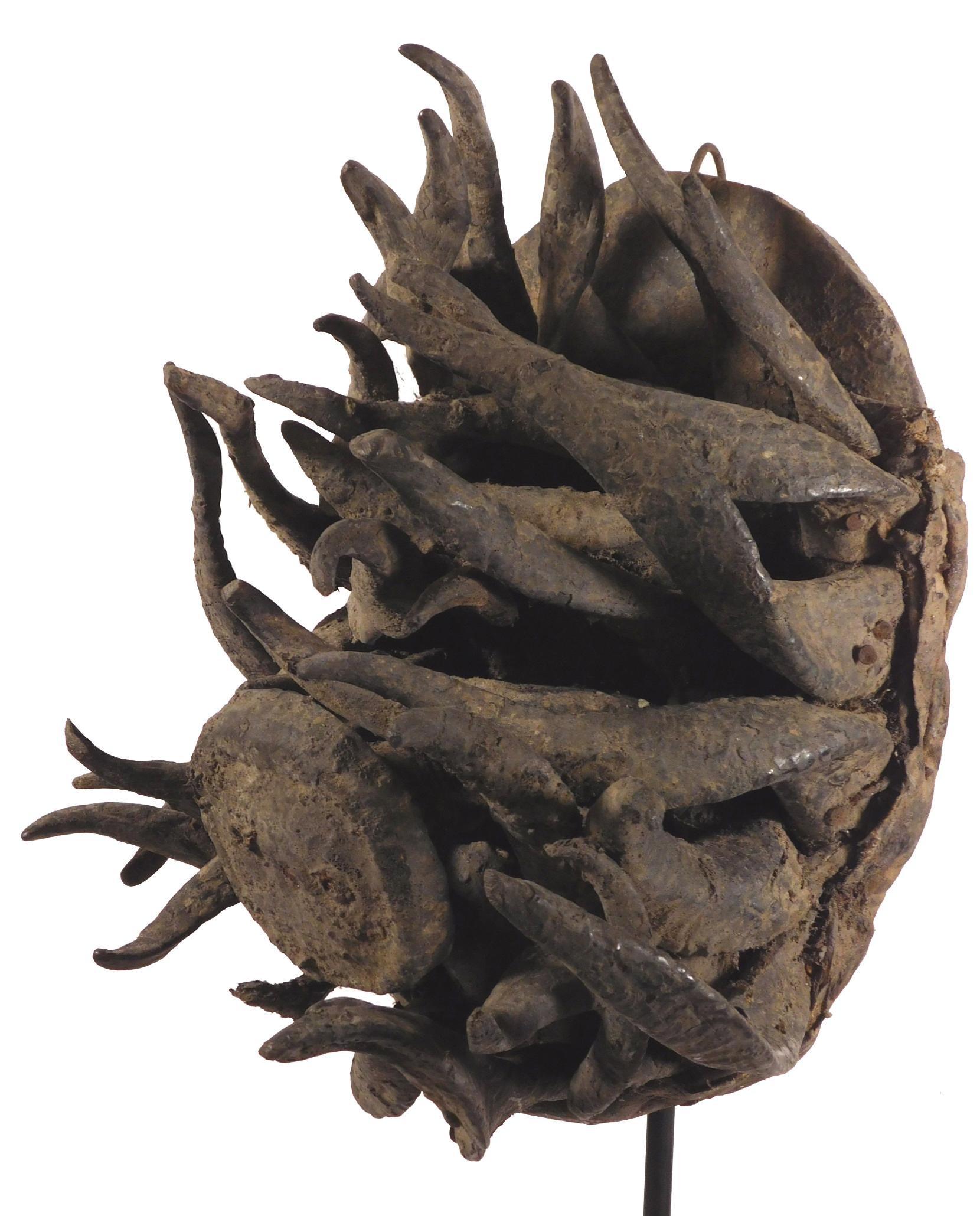 Lot 19: War mask from the We/Guere people of the Ivory Coast, made from wild animal horns and cloth over carved wood, with a heavy patina from libations. Estimate: $1,500-$3,000.

500 Gallery specializes in original artworks and works that are in the style of, in the manner of, or attributed to fine art masters. The firm is always accepting quality consignments for future auctions. To consign a single piece or an entire collection, you may call them at 508-834-8190; or, you can email them at info@500Gallery.com. For more info, visit www.500Gallery.com.