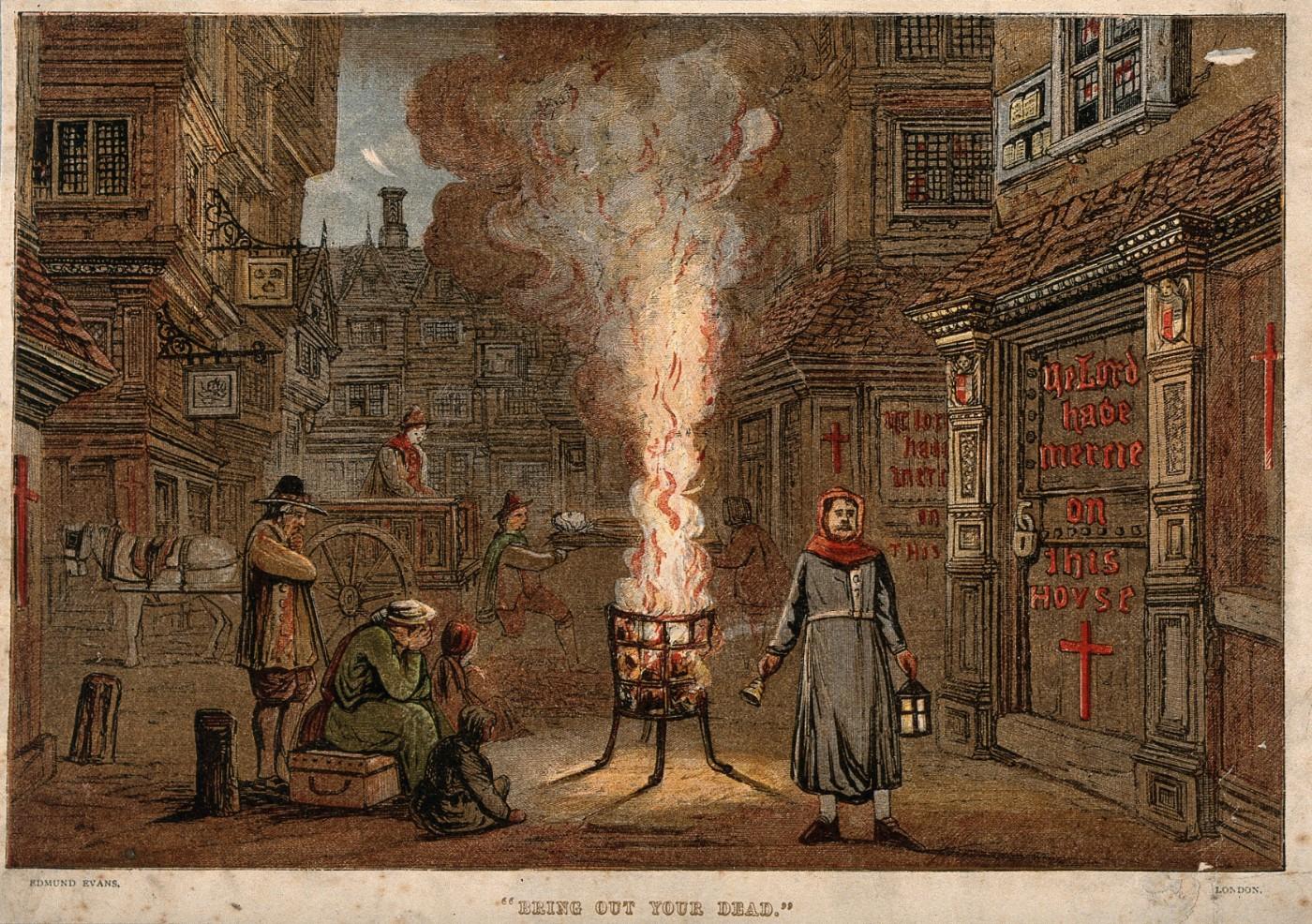 A street during the plague in London with a death cart and mourners. "Bring out your dead." Edmund Evans. London.

As bubonic plague ravaged seventeenth-century England, the afflicted would find a red cross painted on their door, a warning for visitors to stay out. If, on the other hand, a house had been shown mercy while the rest of the neighborhood succumbed–a matter of happenstance more than anything since no one knew the first thing about disease transmission or treatment–it was cause for decorative commemoration. 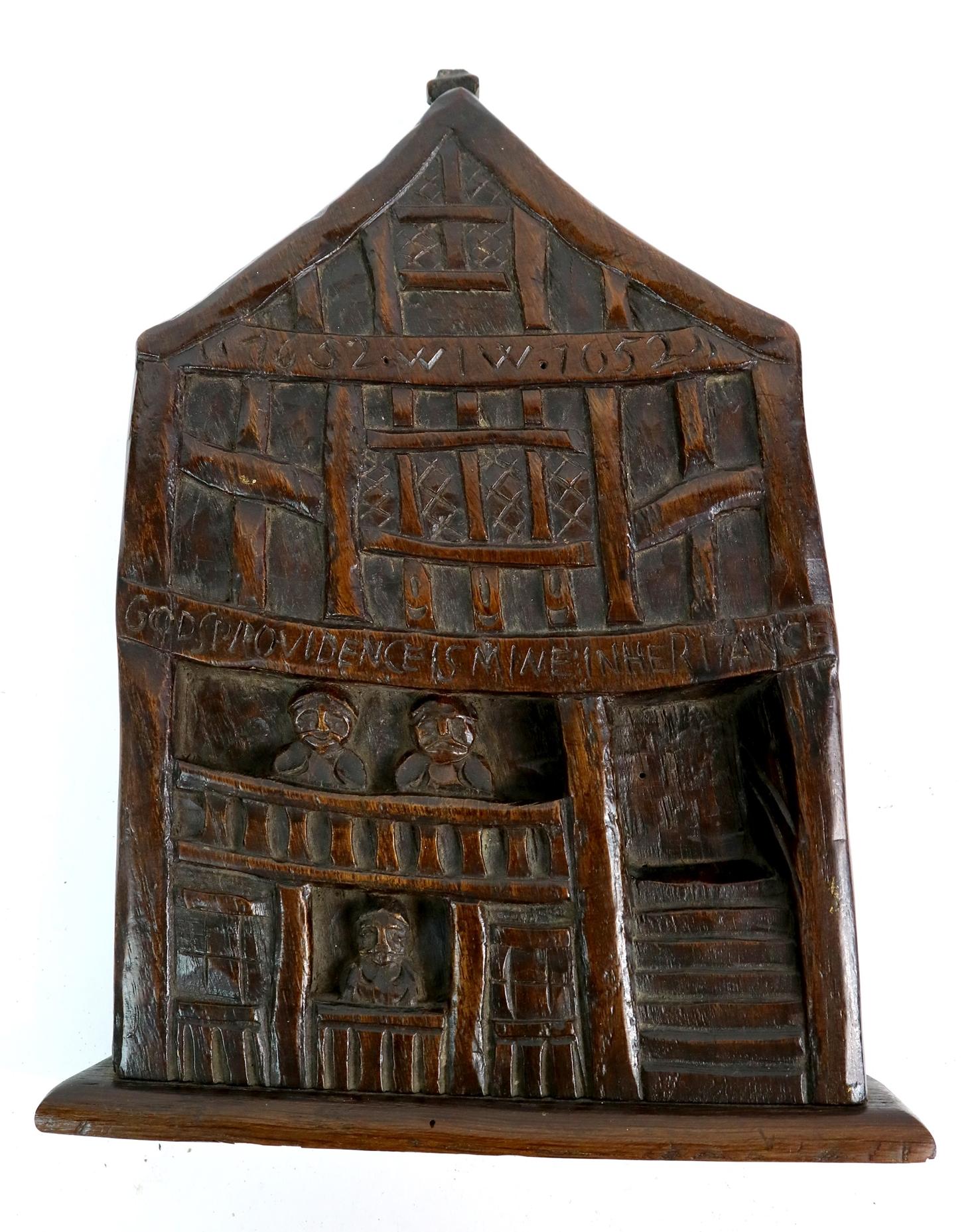 So it was in the case of one Chester house, spared during the 1647-48 epidemic. Although the original structure was destroyed only a few years later, the divine detour around this plot of land was still significant enough in the minds of the rebuilders to inscribe a message on the new home’s front-facing timber beam, reading: “Gods Providence Is Mine Inheritance.” 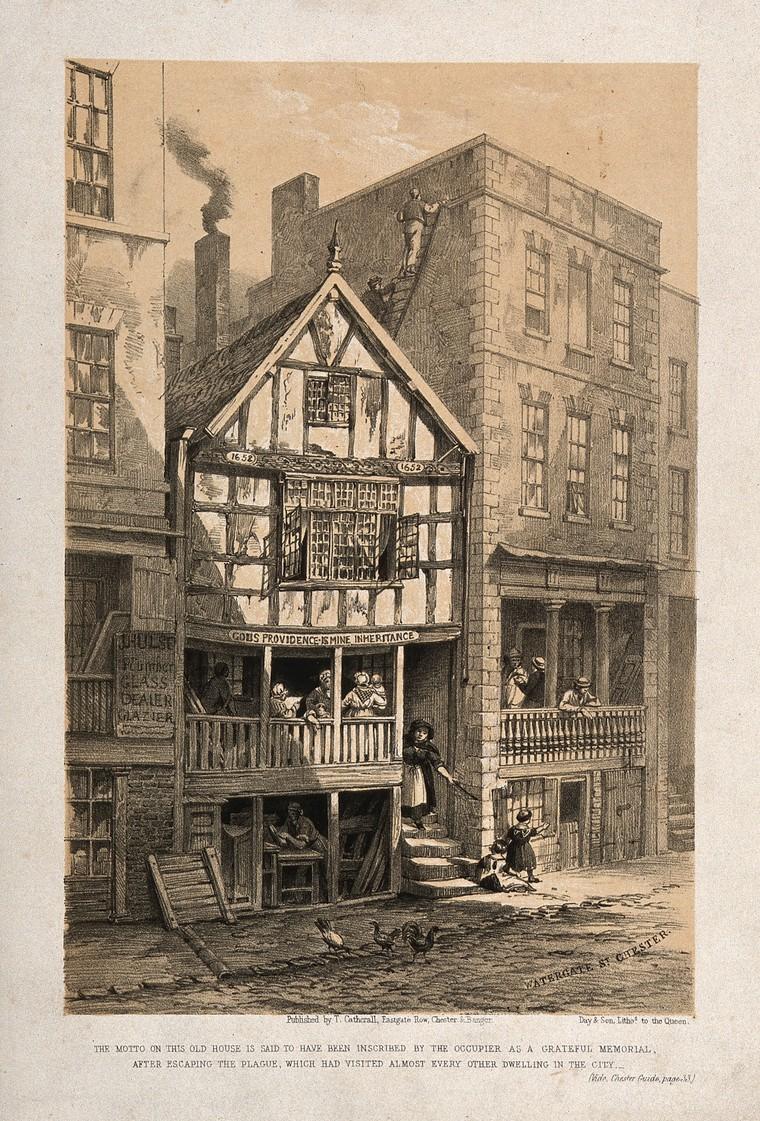 A house on Watergate Street in Chester, said to be one of the few that was not visited by the plague.

Mementos were also made, such as this seventeenth-century carved oak panel depicting the façade of what has become known as God’s Providence House, which is headed to auction in Shrewsbury later this week. In appearance, the approximately 10” x 6 ½” plaque borders on folk art with its primitively chiseled figures. It is estimated to sell for £800-1,200 ($1,000-1,500).

“I was aware of the story and of the house of which this carving is an illustration, but I could not be sure if there was a direct link until I saw the date 1652 carved into the panel,” said Jeremy Lamond, director of Halls Fine Art. “That is the precise date when the house was rebuilt. Then I was sure that this dedication panel and its thanks to divine providence was the real thing, an object that once decorated the ‘Gods Providence House’ at 9 Watergate Street, Chester.”

Much updated but still Tudoresque, God’s Providence House still stands, and is, we presume, still plague-free.

7 Artistic Takes on Protective Facemasks
In addition to protest art seen around the world, creative facemasks seen on social media and at protests are bringing inspired art to troubled times.

Landscape Art as Travel: Turning to Painting for Escapism
Works of art depicting the natural world have long proven to be a source of escapism for artists and audiences alike, proving that travel doesn’t have to be a physical activity in order to be fulfilling.

Bisa Butler is Having a Moment
The year 2020 was shaping up to be a watershed moment in the career of New Jersey-born Brooklyn-based quilt artist Bisa Butler.

Experts Debate Recovered Frida Kahlo Masterpiece
For over sixty years, experts have searched for a monumental work missing from…

7 Artistic Takes on Protective Facemasks
In addition to protest art seen around the world, creative facemasks seen on…

Landscape Art as Travel: Turning to Painting for Escapism
Works of art depicting the natural world have long proven to be a source of…

As art exhibitions have begun to reopen amidst the continuing coronavirus…

How Jean-Michel Basquiat Turned Art History on Its Head
At Home with Artist Judy Chicago
Revealing Van Gogh and Gauguin Letter Sells for $236,000

Evenso: The Common & The Curious
Piranesi’s Visions of Rome
Rembrandt’s drawings—or not?

Jade: The Invaluable Stone
Exploring Global Politics Through Prints
Terracotta Army: The Legacy of the First Emperor of China