The Graphic Art of Evelyn Waugh 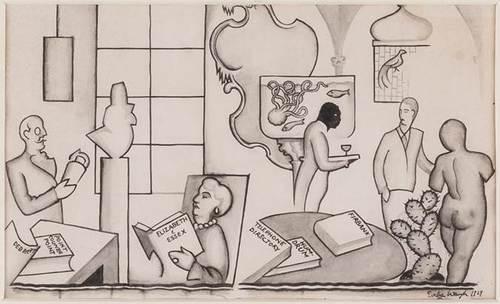 This past Tuesday, May 18, the London rare booksellers Maggs Bros. Ltd.—"antiquarian booksellers by appointment to the Queen"—launched its second exhibition to mark the opening of a new store after its recent relocation to 48 Bedford Square from its 80-year-long home 50 Berkeley Square.

To a bustling crowd of bibliophiles and collectors, Managing Director Ed Maggs briskly handed out white wine and led newcomers over to a simple and unusual untitled original pen and ink drawing by Evelyn Waugh, that he then declared the inspiration for the entire exhibition.

Signed and dated 1929, the illustration depicts a hotel lounge of assorted denizens: a reader, a waiter, a cephalopod in a fish tank, and a bare-bottomed statue being prickled by a cactus—Maggs noted it is a possible unused illustration for Waugh's novel Vile Bodies.

In his introductory remarks, Maggs said of picture, "This [exhibition] began with this drawing. I am a dealer not a collector and I am seldom consumed by envy of others' books and objects. I sold this drawing 25 years ago and Mark Everett bought it from under my nose last year. I was fuming. I was incandescent with jealousy. I, of course, would have probably sold it to him, but I would have had it for a few minutes. It is a tremendous thing." 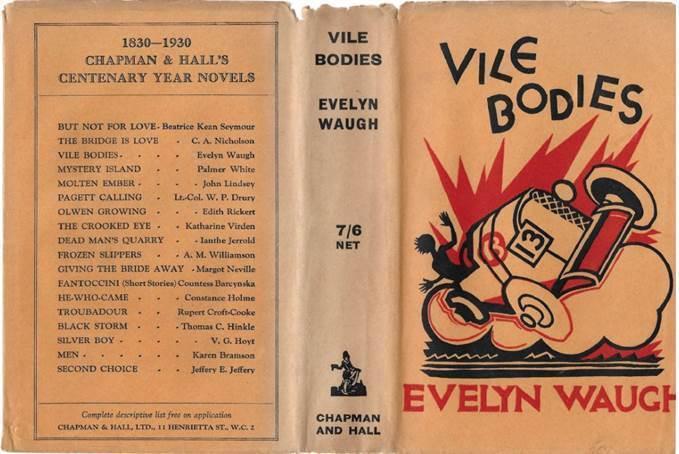 The drawing, Maggs explained, led to the idea of bringing together as much original artwork and printed material featuring the graphic art of Evelyn Waugh as possible, as Waugh was an avid bibliophile. He was addicted to fine editions, planned and released special and limited editions of his own books, and put incredible thought and design into his books’ designs.

Running through July 28, 2017, the exhibition features what is thought to be the first such exhibition devoted to Waugh’s ambitions as an artist—his work often uniquely combining an unfashionable Victorian aesthetic with that of the Jazz Age, and includes the dust jacket design from Scoop, a manuscript of Vile Bodies, a painting of Napoleon by the artist “Bruno Hat,” an invented persona that tricked many in British high society and was partly concocted by Waugh, and drawings by Waugh done for his college magazines including a series illustrating the “Seven Deadly Sins”—his entry for No. 1 being “The intolerable wickedness of him who drinks alone.”