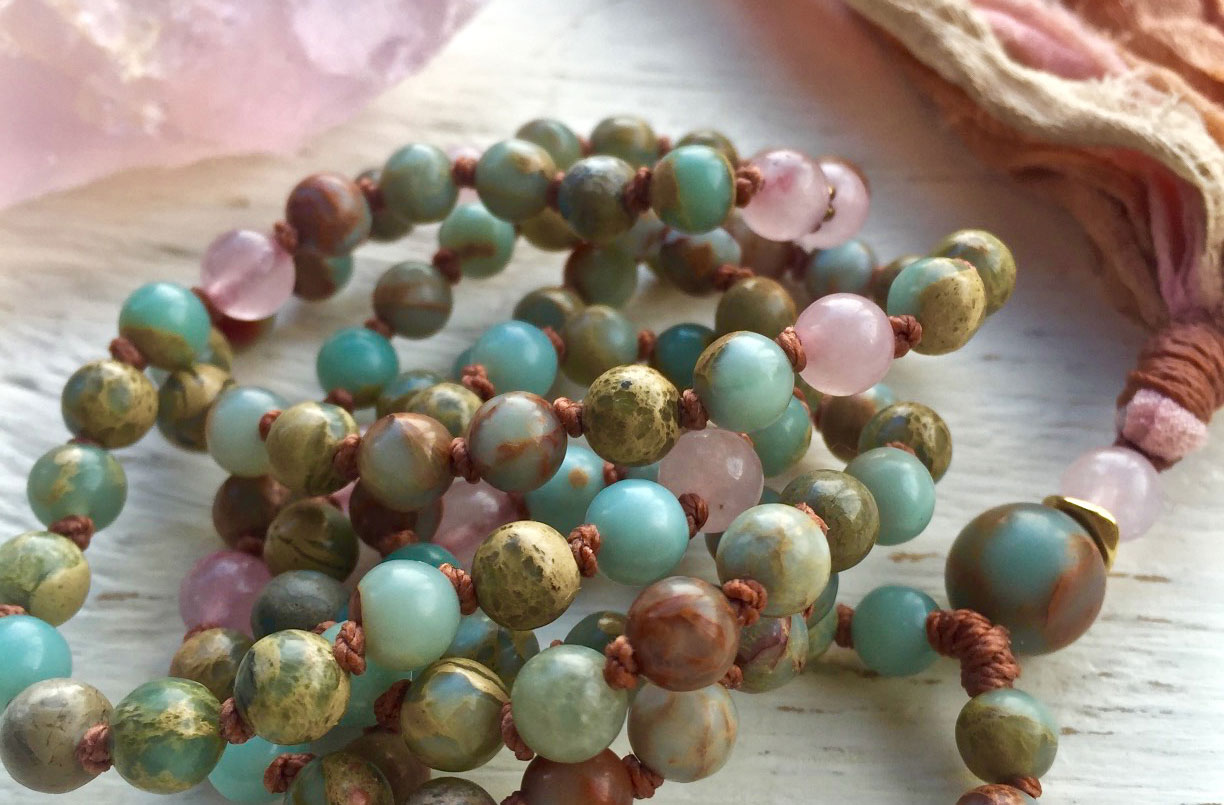 Once found only at Tibetan import stores and yoga studios, malas have served for centuries as material reminders of a spiritual practice. Now malas worn as necklaces or bracelets are making their fashion debut, turning up at department store jewelry counters across the country. 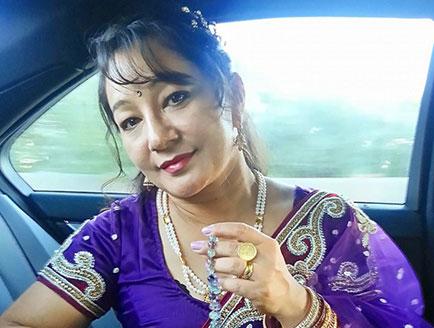 Americans are getting wrapped up in mala beads, an ancient meditation tool. Both spiritual and fashion-forward women and men alike are embracing malas similar to the prayer beads worn by the Dalai Lama. Malas—the Sanskrit word for “garlands” — are weaving themselves into the mainstream, much in the manner of Tibetan prayer flags or incense.

“The mala goes back 8,000 years, some say 10,000 years,” said Sarita Shrestha, a native of Nepal who owns Tibet Imports in Denver.

The long strands hold 108 beads made of stones, bones, wood or seeds. The number 108 is auspicious and in Yogic tradition reflects 108 sacred sites known as pithas, located throughout India; as well as 108 panishads and 108 marma points, sacred places of the human body.

Worn as necklaces or bracelets, malas once were purveyed primarily by Tibetan import stores and yoga studios as material reminders of a spiritual practice. Now malas are turning up at department store jewelry counters and in preppy Vineyard Vines window displays or tony catalogs such as Sundance.

“I feel happy that people are open to it. Even men are getting malas. It’s people in a spiritual awakening who want a mala. And spirituality makes us want to do the right things,” Shrestha said. “But even if for fashion, for color, or dress-up, it makes me happy because people are still getting the energy of the mala.”

At Tibet House in New York City, Tenzin Sonam said, “The mala is a sacred object. We all have a mala. It’s part of life.”

“The mala is an object of habitual religious use to help to calm the mantra recitation,” said Sonam. “In Tibetan Buddhism, we consult the teacher if someone is not feeling well, or having certain doubts, or starting an important mission or job. The teacher says, ‘Recite this mantra 1,000 times or 10,000 times.’ So we use prayer beads to count.”

Individuals employ malas in almost as many ways. 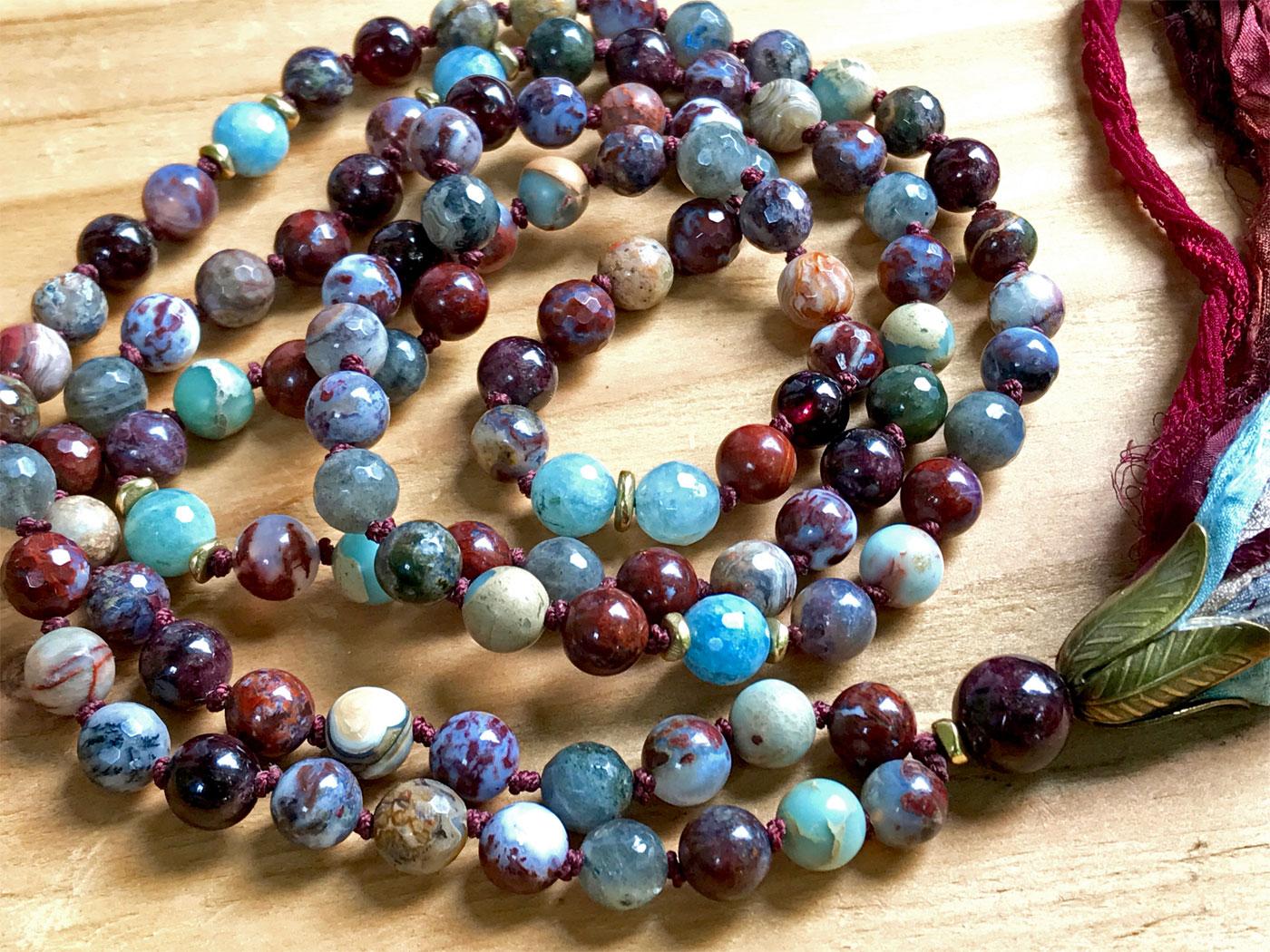 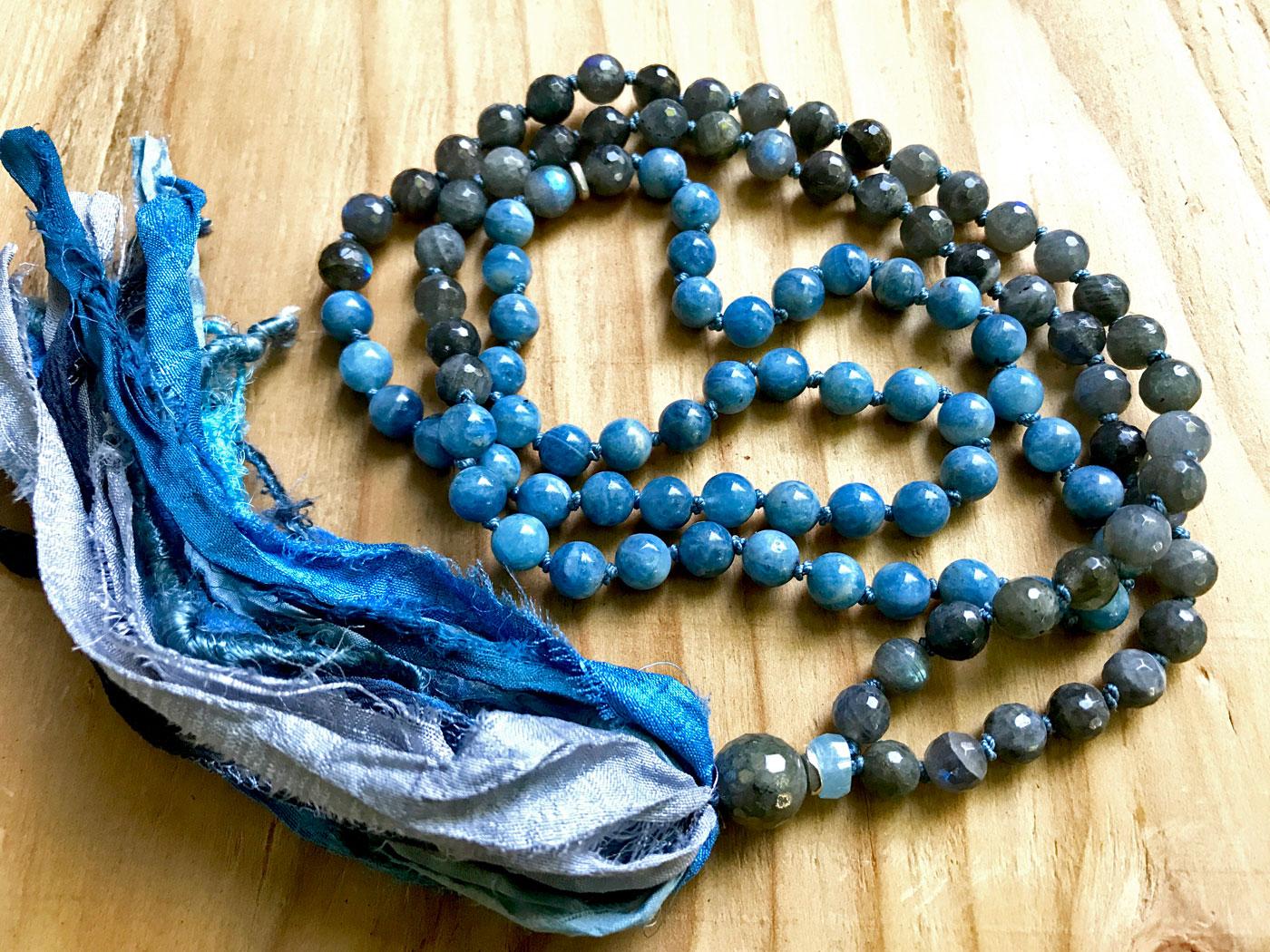 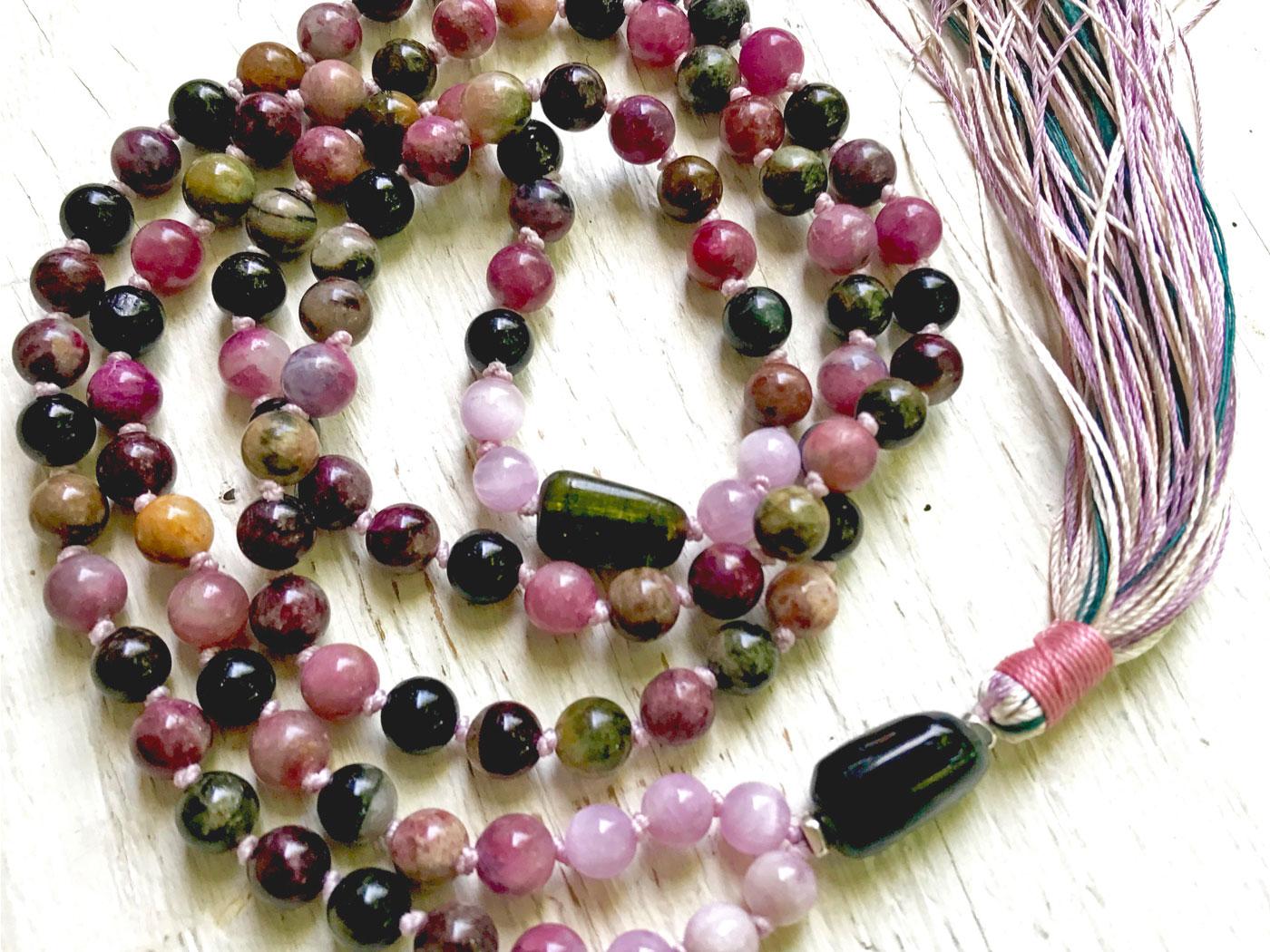 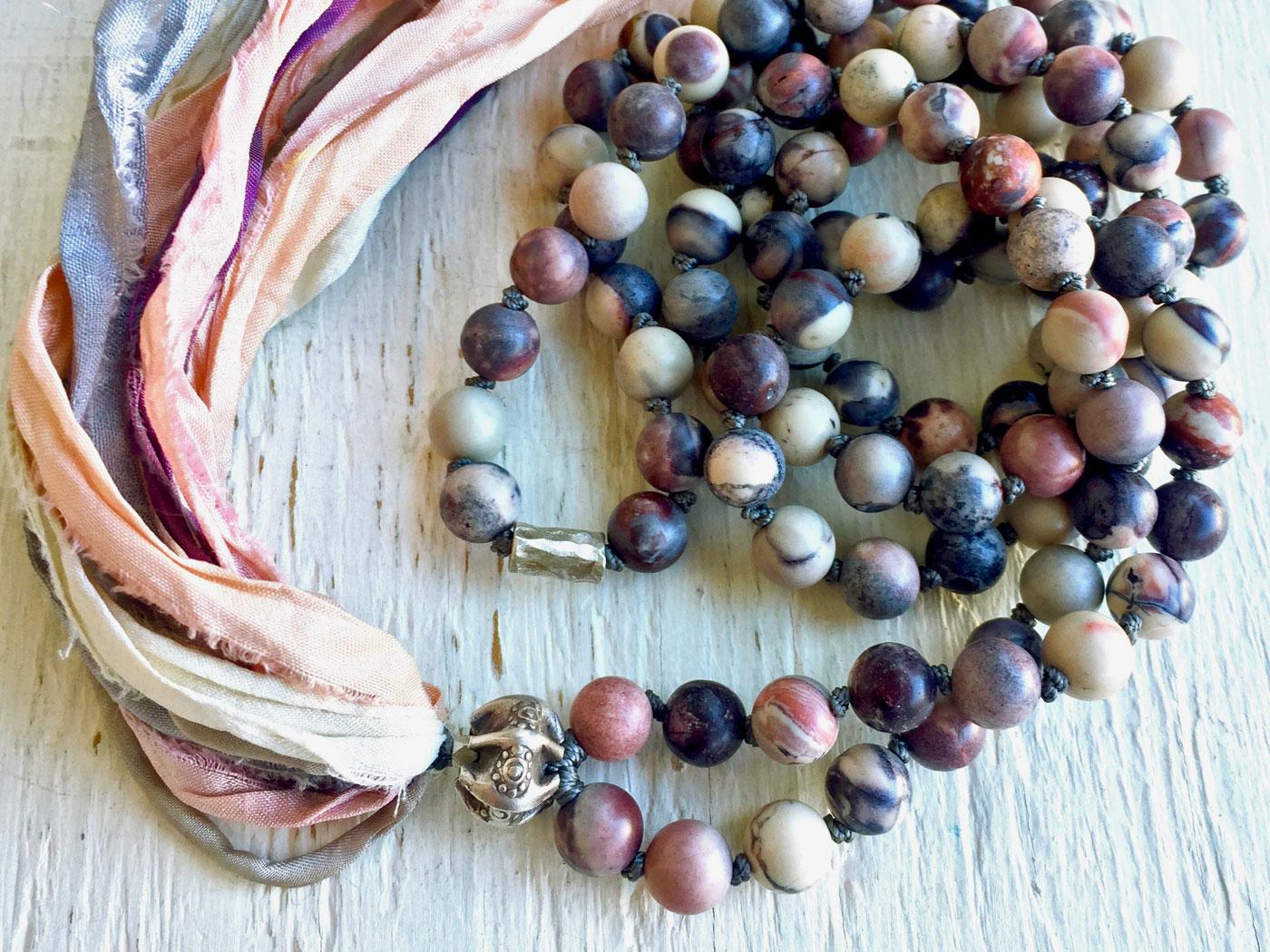 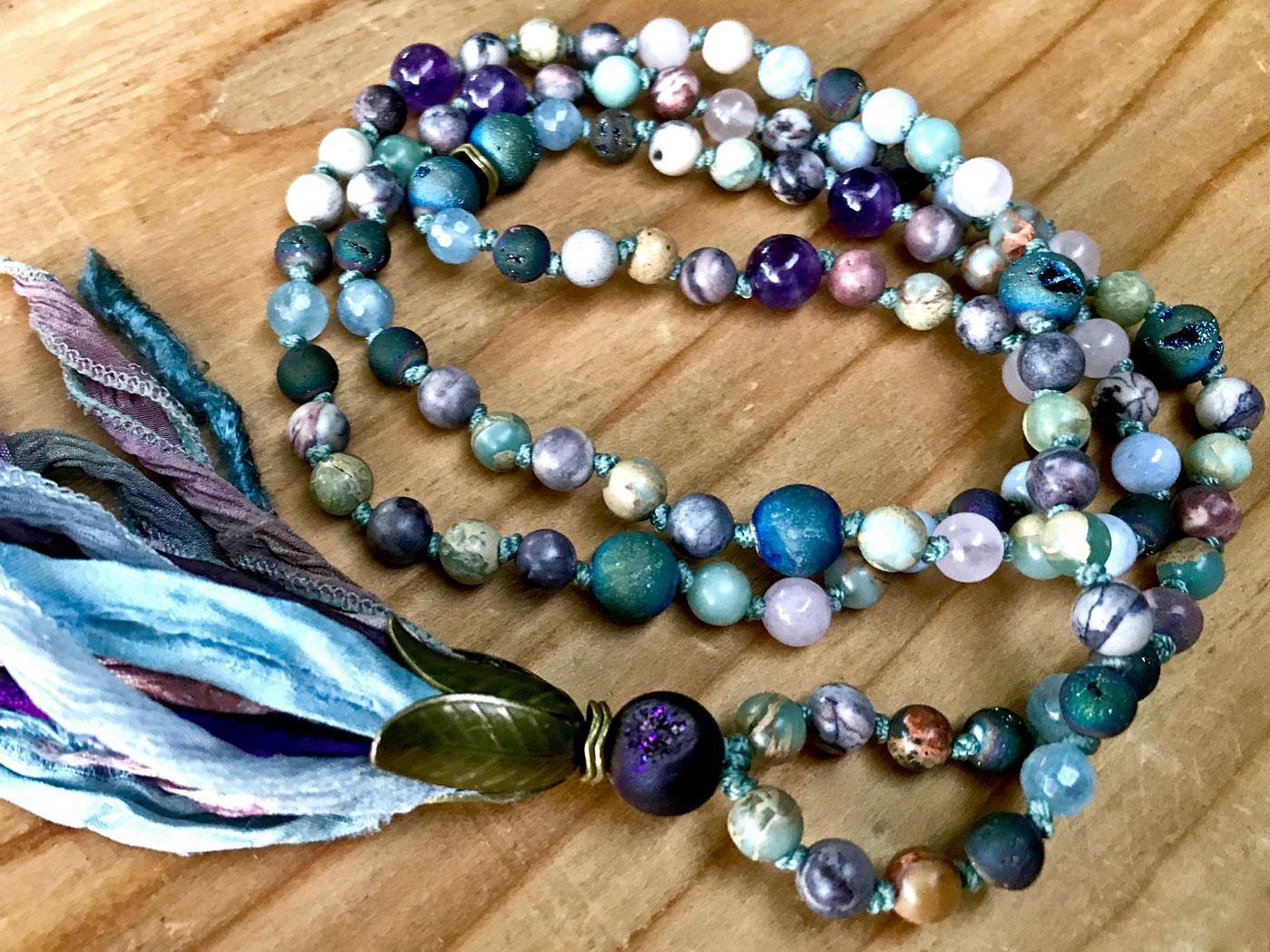 “Some carry mala in the temple or to important Buddhist festivals or on pilgrimage. When it comes to meditation and practices, it depends on the person. Holding something reminds you to focus. Rotating helps to concentrate. But some don’t use it. As far as meditation, the mala is extra help—not the root, but the branch.”

Along with providing practical counting assistance and kinesthetic comfort, the mala is believed to release negative energy and absorb positive energy during yoga practice, chanting or meditation.

“The most important thing about meditating with a mala is breathing,” said Shrestha, who wore a mala with citrine beads and a rudraksha seed. She received her first mala in second grade.

“My grandparents taught us how to chant the mantras loud,” she said.

Sonam’s mala is simple sandalwood with a tassel.

“I don’t wear it,” he said. “I keep it on an altar with a traditional butter lamp, and offering bowls found in every Tibetan home.”

Guidelines for proper use of a mala vary, as well.

“I have seen the mala with both the left and right hand holding it. I don’t think that’s strictly mentioned. It’s more important the way the beads are used, always rotated clockwise. Then you can stop and turn the mala, reversing and starting again.” 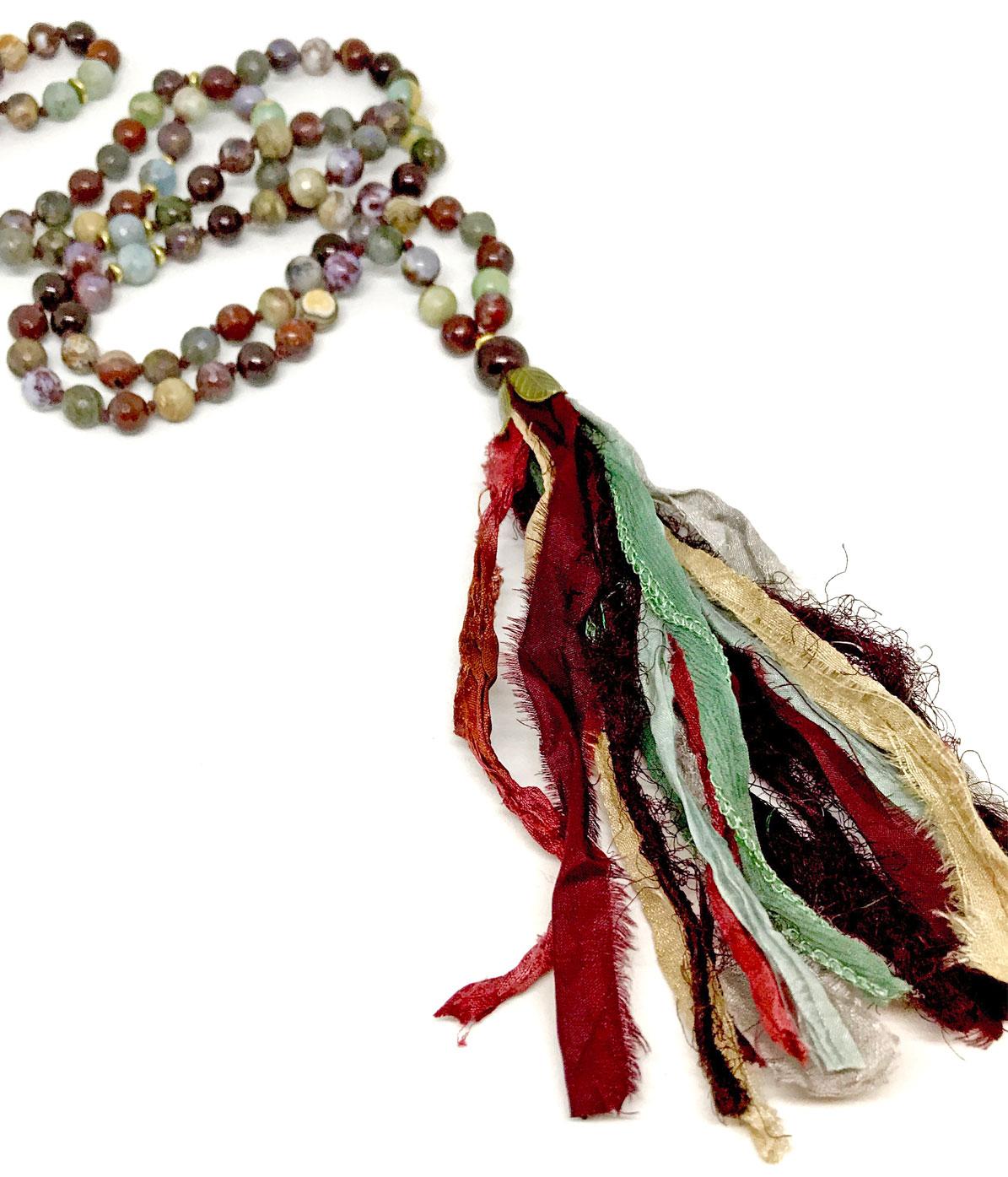 “It is a religious item. It is traditionally said never to drop it on the floor or put it on a chair or floor, but on a table,” said Sonam.

“I specialize in teaching because making malas brings happiness,” she said. “Tying knots calms the mind. With every knot, you unknot yourself. Touching the stones has benefits. And it’s like crocheting: you feel good that you have made something.”

One her students, Karen Lerner is based in Portland, Oregon, but has sold hundreds of her malas around the globe through Naked Plant Jewelry website and on Etsy.

“I love sending malas out into the world,” said Lerner, who ships her malas to customers in Europe, Australia, even Tibet.

Lerner began making mala beads in 1992, after traveling to Bali.

“I purchased some rare beads — old glass beads that came through Africa, white heart trade beads, and Dzi beads,” she said. “When I went back to Bali in 1993, all the beads were gone, all cleared out. They’re very hard to find now.”

And when found, the beads bring a pretty price.

“The dzi beads are prized. They were used as protective amulets in Tibetan medicine,” Lerner said. “I saw some at the Tucson Gem and Mineral show for $1,500 each.”

“We can’t forget the metaphysical aspects of gemstones that are a finite resource, part of our planet, and just amazing. The stones correspond to chakras,” said Lerner.

“The stones have energies,” Shrestha said. “They’re not just for beauty, but for healing. Even if not meditating, if you wear the mala you still get the benefit of the stones.

Shrestha also taught Dana Hanizeski to tie malas. Hanizeski got her first mala while studying in India in 2013. In 2016, while leading a retreat to Nepal with Shrestha, Hanizeski deepened her interest in semi-precious gemstone malas.

“I’m interested in healing with crystals,” said Coffin, who now designs custom-made malas. “I’m using a special recipe, taking into account jewelry a person already wears, what the person is working on, what they’re trying to heal. Together, we select beads, thread, guru bead and tassel so it’s a one-of-a-kind mala.”

While tying malas, the women chant mantras, infusing the beads with intentions. At the end of the garland, a larger or otherwise distinguishable guru bead holds a place of prominence. A mala typically is finished with a tassel. Lerner often uses repurposed silk from Indian women’s saris.

“Tassels are the biggest jewelry fashion trend,” said Lerner, “but there’s a deep spiritual meaning to the mala tassel. The tassel represents enlightenment, opening the third eye, and the tassel threads represent the roots of the lotus that rises from the muck to flower.”

Sonam accepts the popularity of malas in Western culture, even as a fashion accessory. “The mala is a sacred object, but as long as nobody is what we would call disrespecting prayer beads, it’s okay. Wearing a mala doesn’t make a person a Tibetan Buddhist. Any prayer beads you wear are just an item, not the practice.”