A curated selection of items recently sold at auction. Asia Week brings an embarrassment of riches to New York every March. Here are six that bidders chased eagerly. By Sheila Gibson Stoodley
March 2019 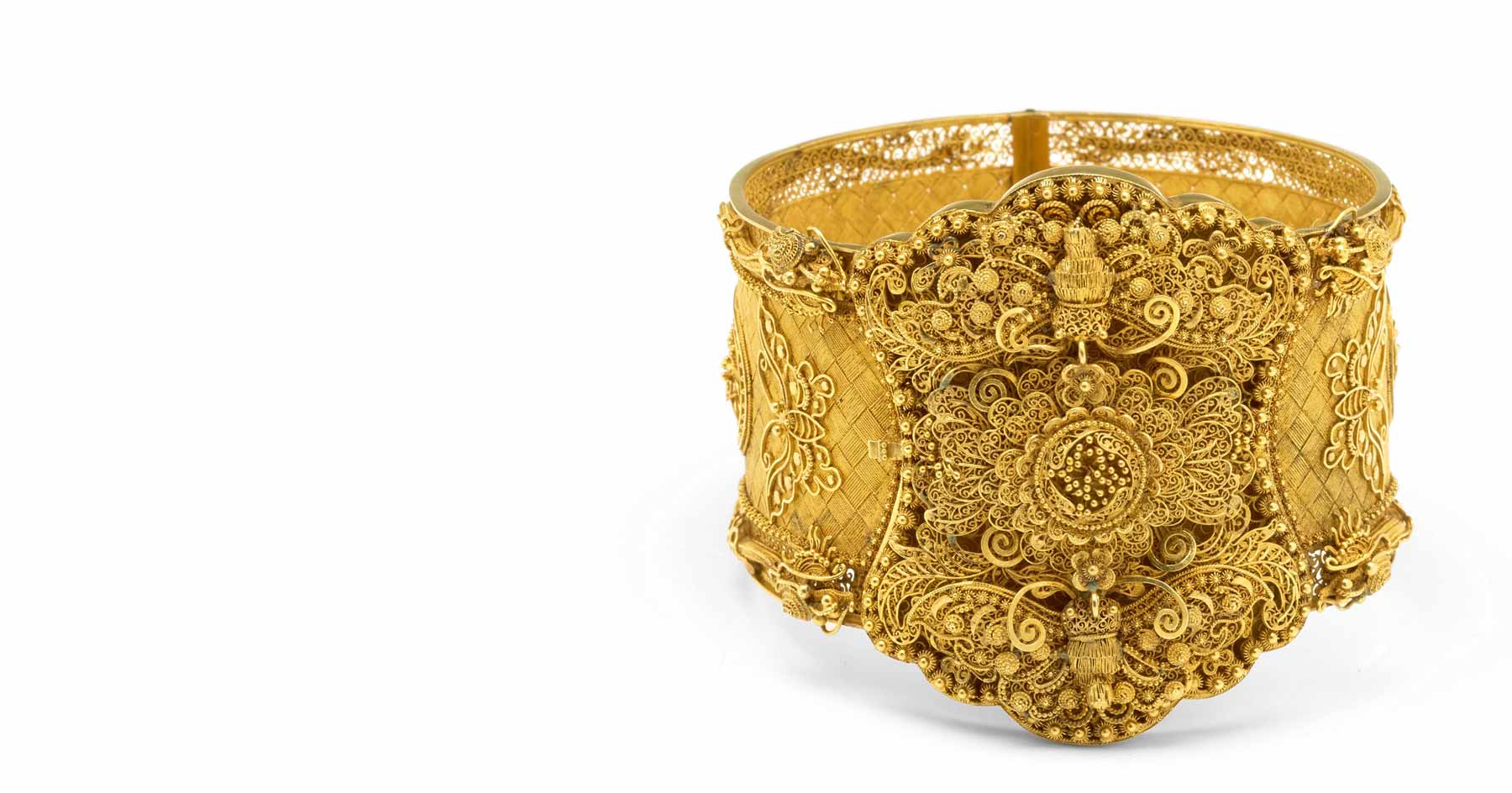 A curated selection of items recently sold at auction. Asia Week brings an embarrassment of riches to New York every March. Here are six that bidders chased eagerly. 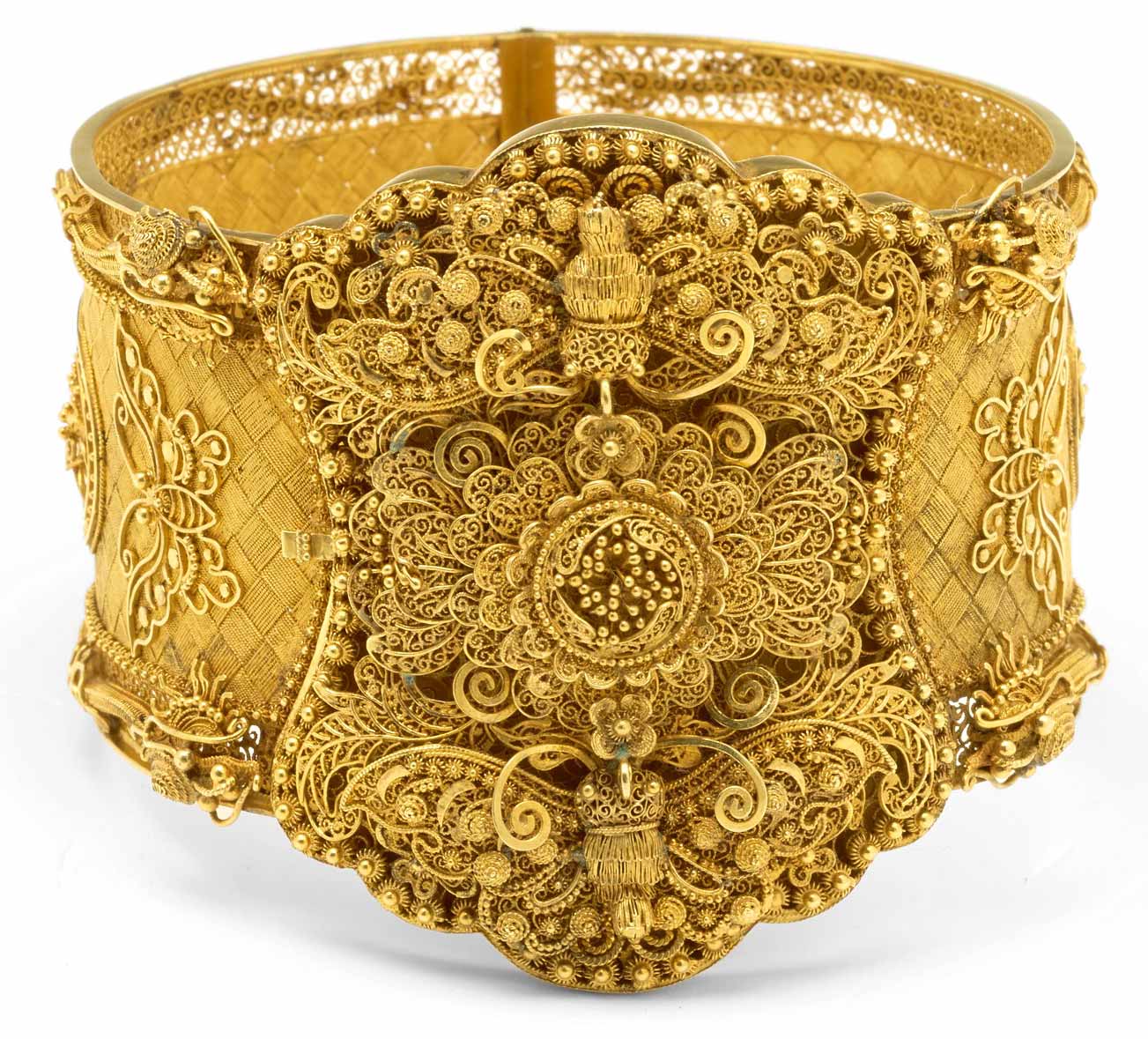 When asked if he has handled anything quite like this solid 18k gold bracelet, Bruce Maclaren, senior specialist of Chinese fine and decorative art at Bonhams had a ready answer. “No. That’s an easy question there,” he says, laughing. The bracelet appears to have been given to Ellen Wayles Randolph as a gift to make amends for her husband, Joseph Coolidge, having been briefly imprisoned by the Chinese during the first Opium War. The piece has no date, but we can deduce it was made and given between 1839 and 1841, when the couple was in China. The 14 Chinese merchants named in the inscription were active then as well.

There’s no proof that Randolph ever wore the bracelet, and its absurdly intricate filigree details might have helped preserve it. “There are so many things hanging off it, it’s daunting to wear,” Maclaren says. “Its impracticality as a piece of jewelry kept it in good condition.” Estimated at $20,000 to $30,000, the bracelet wildly overperformed at auction, partly for its craftsmanship and partly for its interesting provenance—Randolph was the favorite granddaughter of Founding Father Thomas Jefferson. Maclaren, who was at the Peabody Essex Museum (PEM) from 2000 to 2009, proudly reveals that the winning bidder will let the PEM reunite it with the silver covered trophy cup that Coolidge received for his troubles, and which was probably made by the same Chinese silversmith. The pair should go on display in the museum’s Asian export gallery later this year. 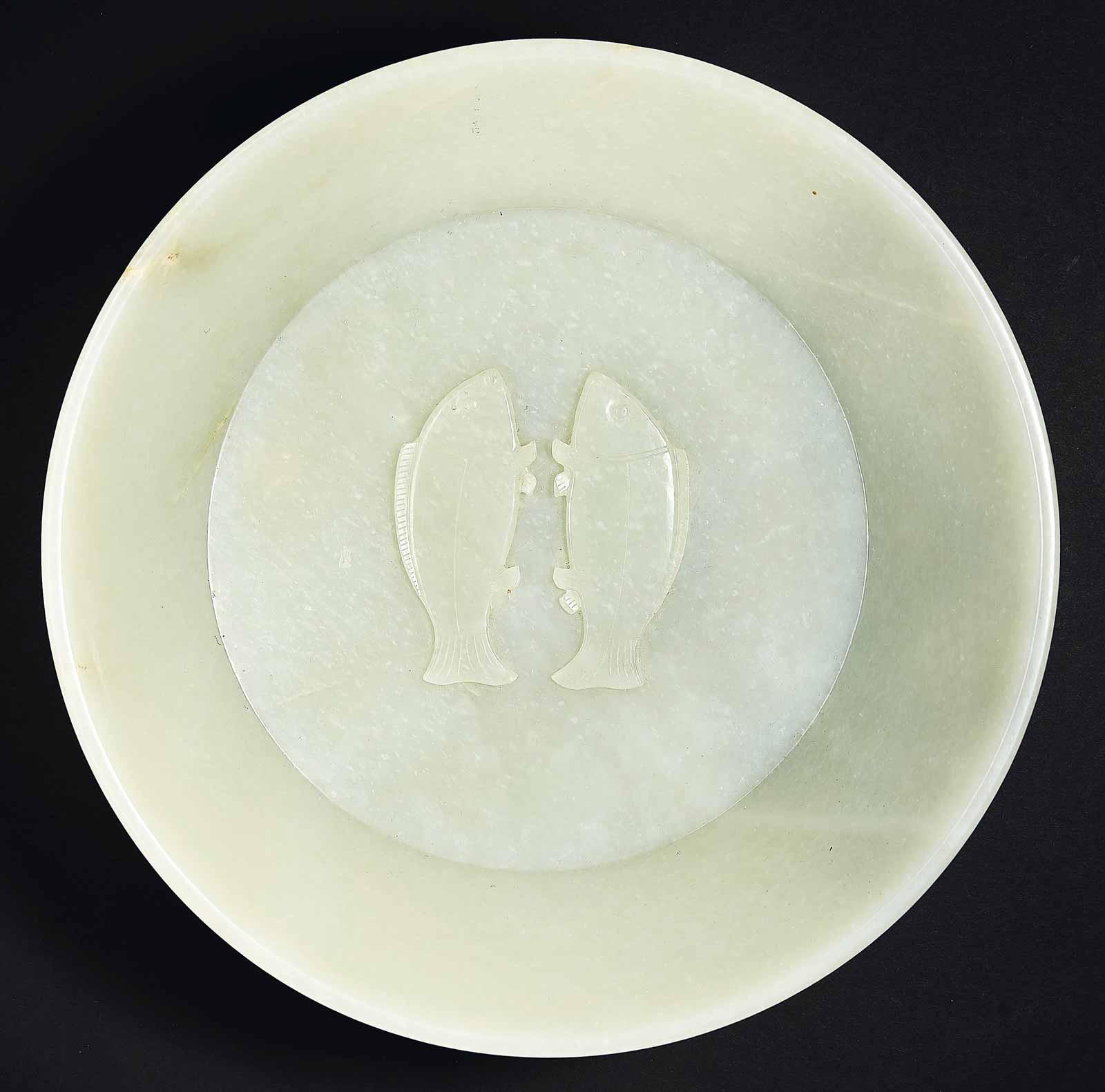 Fit for an Emperor

Every Chinese scholar needs a brush washer to clean his calligraphy tools. Normally, these objects measure three or four inches in diameter, but this one was never meant to be a functional object. Stretching a luxurious 10 inches in diameter and made from a single piece of pure greenish-white jade, it met with the approval of the Qianlong Emperor, who applied two seals to it and incised it with an imperial poem. “It’s a statement of how strong and powerful an emperor you must be, to have such an object,” says Olivia Hamilton, Christie’s head of sales for Chinese works of art.

The washer dates to 1786, 13 years before the legendary emperor died. Though elderly, he wished the world to know he was just as active as ever. One of the two seals translates to “still diligent every day”.

If anyone filled it with water (there’s no proof the Emperor actually used it for its ostensible purpose), it would reveal another of its charms. The pair of fish at the bottom of the bowl, which symbolize prosperity, were carved in a way that would make them look like they’re floating. Christie’s, which estimated it at $1 million to $1.5 million, described it as “extremely rare,” noting it was the largest of three known examples. “The first thing that strikes you is its size,” Hamilton says. “If you want to pick it up, you have to use both hands. It makes you take care of it. It’s not something you handle casually.” 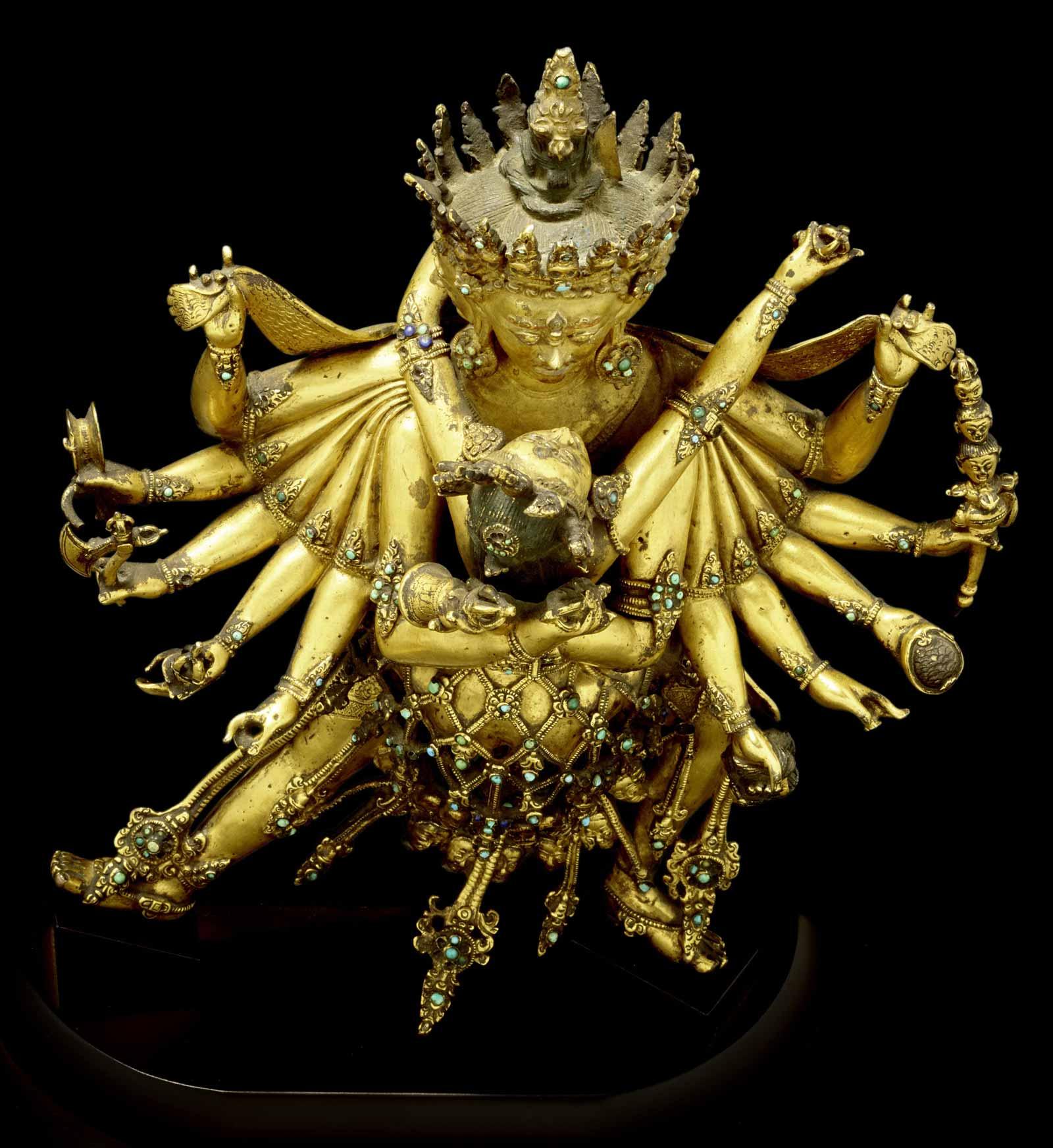 Not just any Tibetan artist was chosen to portray the twelve-armed Buddhist deity Chakrasamvara. Depicted with four faces and shown joined with his consort, Vajravarahi, the sculpture is meant to be a meditative aid that illustrates a complex abstract concept—the union of wisdom (her) and compassion (him).

“It’s so technically demanding to produce, and it’s one of the key deities, so the best artist of any given time and location was assigned to do the work,” says Mark Rasmussen, head of Indian, Himalayan, and Southeast Asian Art at Bonhams. “The best examples are effortless in their portrayals. This is one of the more powerful examples of Tibetan Chakrasamyara.” Estimated at $200,000 to $300,000, it commanded $225,075. 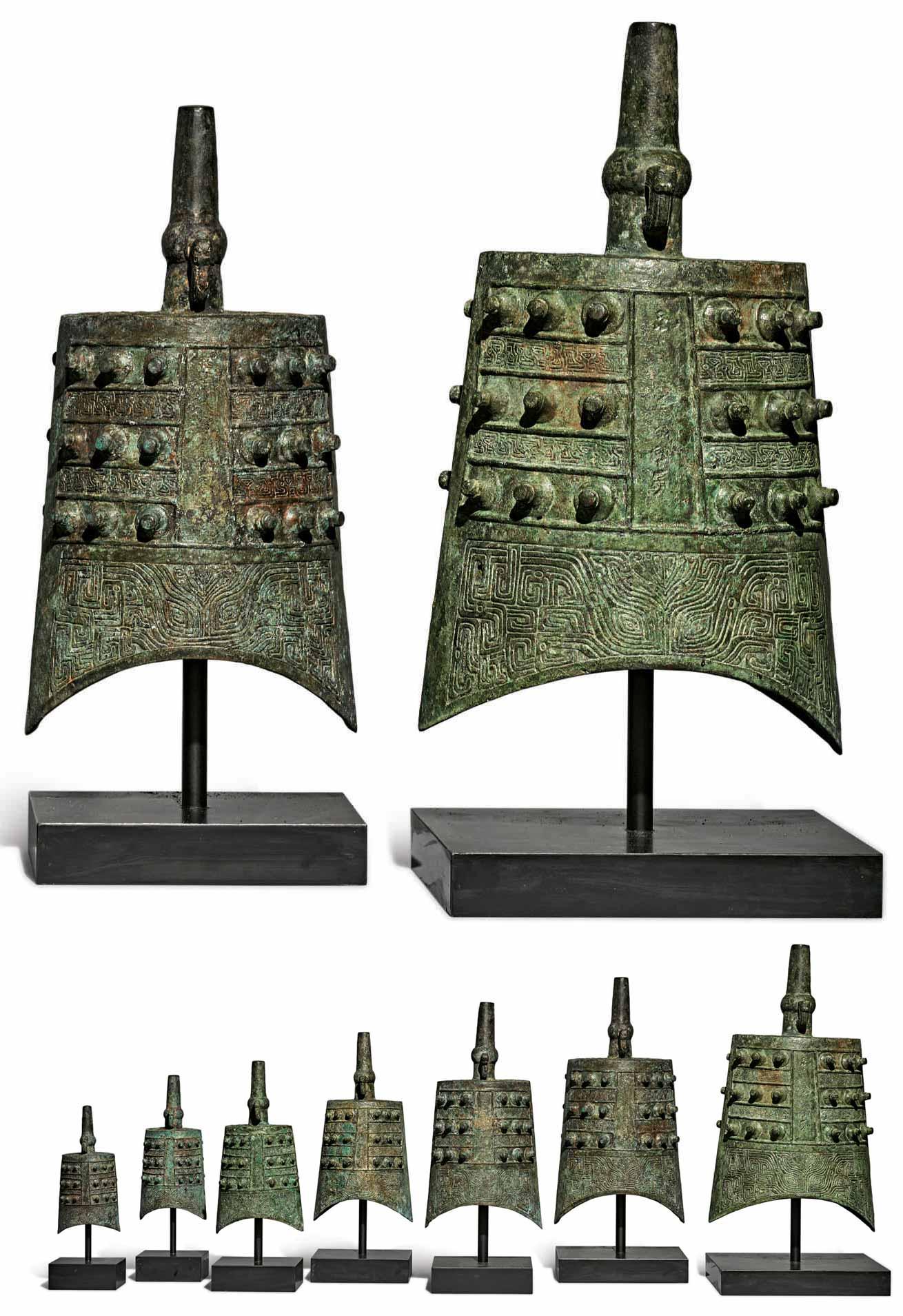 Bells of the Ancients

Virtually no one was surprised when this set of archaic Chinese bronze ritual bells sold for more than double its high estimate. The last time a set like this came to auction in the West, it was 1999.

While it appears to be complete, we can’t be entirely sure the set didn’t originally contain more bells. Other sets have ranged in number from three bells up to 65. Aristocratic Chinese who lived more than 3,000 years ago would line the bells up in the manner seen here and strike them during ancestor-worship rituals, or maybe to celebrate a victory in battle. The tool used to strike the bells does not survive (which is typical for these ancient musical instruments), but they would make a sound if struck (which is not recommended, because the bronze could have been seriously weakened by the bells’ long tenure in the ground).

Even if they stay silent forever, the bells are impressive works of art. Hang Yin, Specialist in Sotheby’s Chinese Works of Art Department in New York, explains that each would have been made by piece mold casting, a technique that requires artisans to inscribe the interior of the clay mold with the decorations they wish to see on the finished bronze. “It’s not easy to make a really fine design,” he says. “You’ve got to decorate the mold with precision, or it will be misshapen and distorted.” 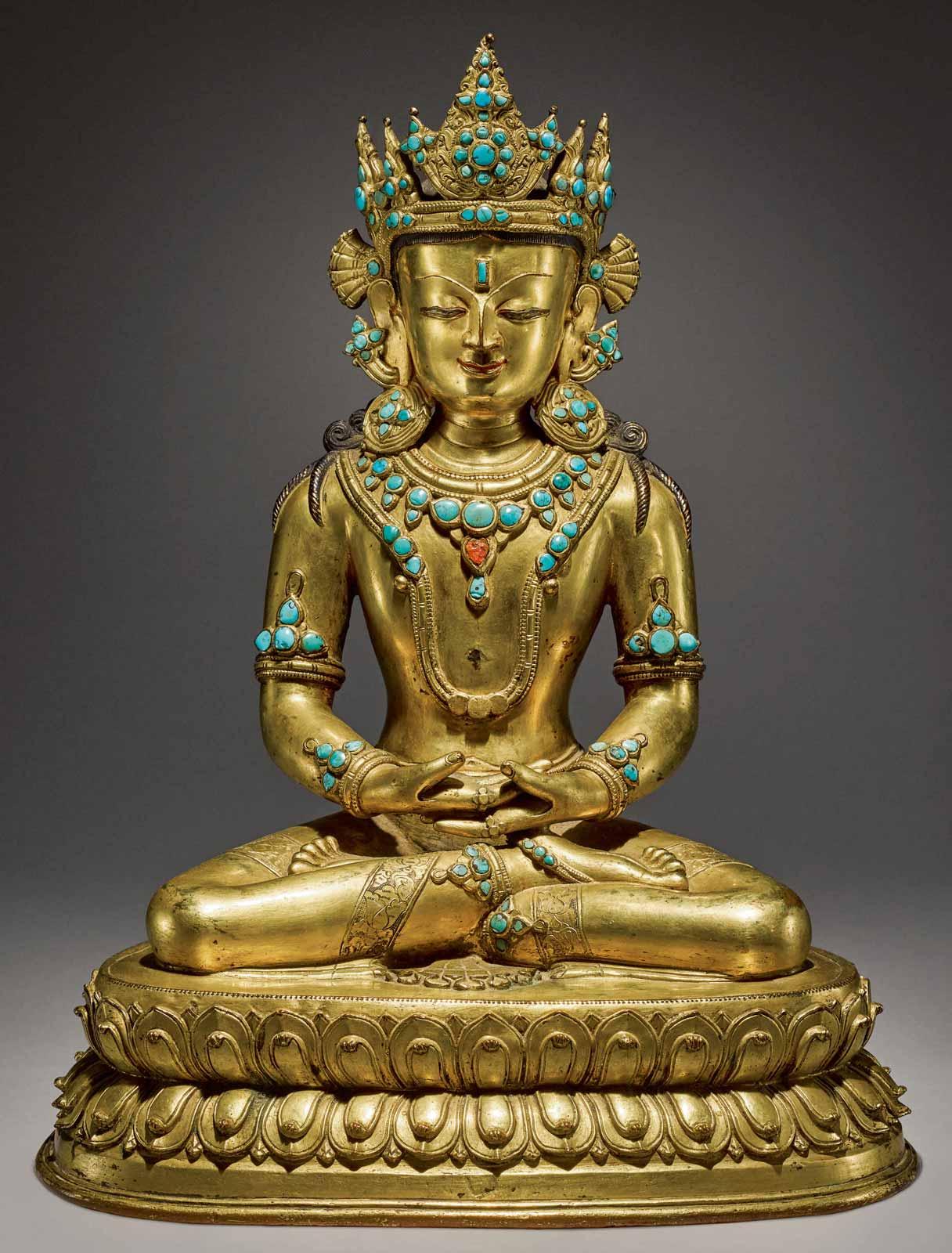 The deity Amitayus appears often in Tibetan Buddhist art of 15th and 16th centuries, but rarely in such an accomplished form. You don’t need to be a scholar to imagine Tibetan master sculptors of generations past parking their apprentices in front of the sculpture and saying, “This. Make it look like this.” “It’s perfectly proportioned, perfectly cast, every aspect of it. It’s almost like liquid, it’s so beautiful,” says Anu Ghosh-Mazumdar, Head of Sotheby’s Indian and Southeast Asian Art Department.

The way in which Tibetans practiced Buddhism, which involved very little direct touching of their religious objects, helped ensure that the 14 3/8-inch figure survived well. “It’s in fabulous, fabulous condition. The gilding is basically intact,” says Ghosh-Mazumdar, noting that at least some of the turquoises decorating the piece might have been replaced at some point.

The sculpture attracted many fans during the pre-sale exhibition. “It was one of the most popular pieces. He left his case a lot,” says Ghosh-Mazumdar, who required that everyone who handled it wore gloves. Estimated at $200,000 to $300,000, it achieved a sum that modestly exceeded its top number. 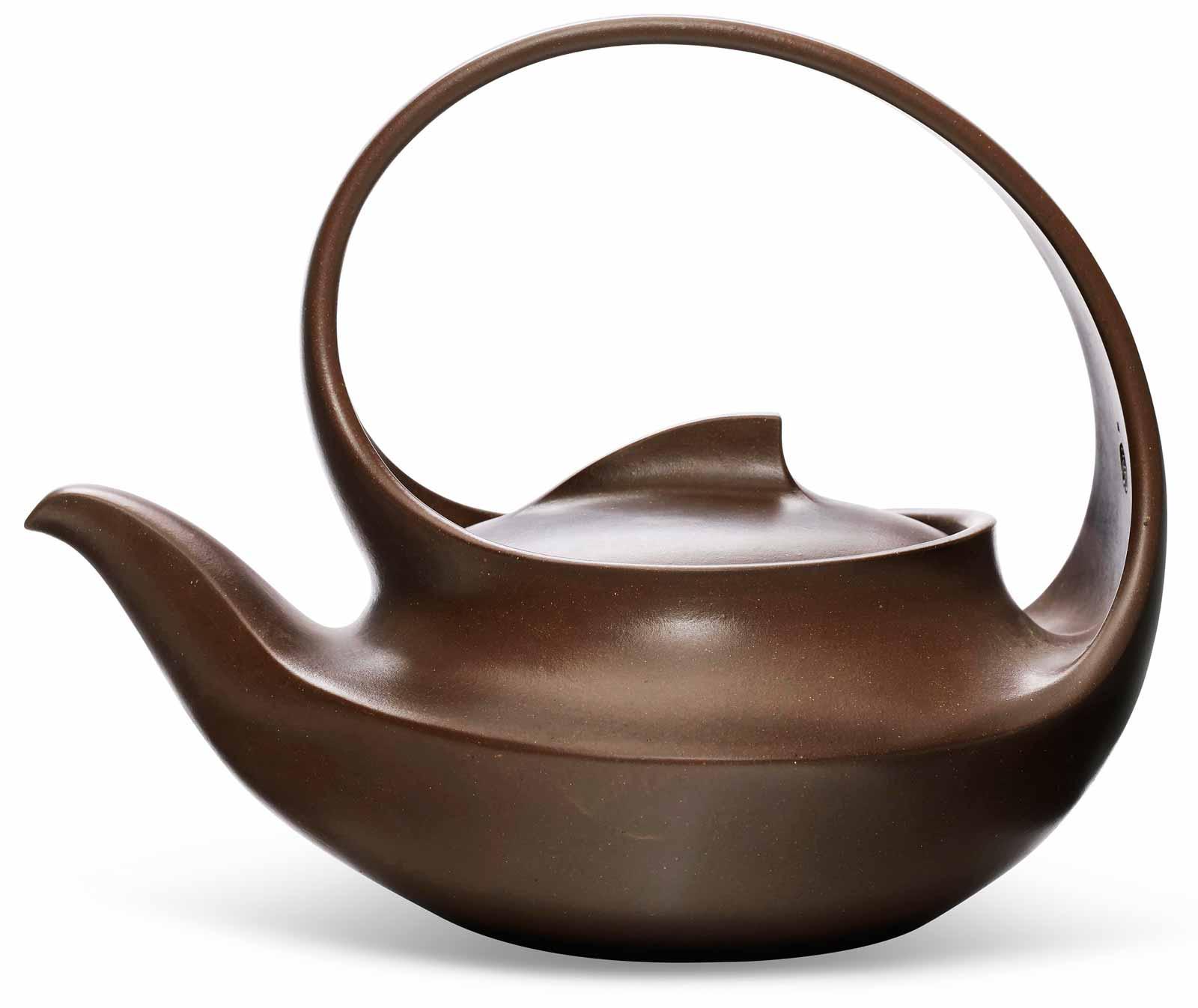 Chinese artist Wang Yinxian, also known as Zhaoyang, started her career at the age of 14 and earned the coveted title of China Arts and Crafts Master before she passed on last year. In 1988, she joined forces with Zhang Shouzhi, Professor of the Department of Ceramic Art, Central Academy of Arts and Crafts, Beijing, to create the 8 1/ 4-inch teapot they dubbed Flowing. They designed it together, and she executed it, but it appears to be their only collaborative work. “They clicked together,” says Rufus Chen, Specialist, Chinese Works of Art, and head of sale for the online auction, which featured this piece on its digital “cover.” He adds that the exquisite teapot had a less-than-exquisite inspiration: “They learned from the form and the movement of the snail, and made the teapot together.”

The flexible, dense clay of Yixing, which potters have worked since ancient times, allowed Wang to achieve the extraordinary and challenging shape that the teapot takes. It’s unknown whether and how many of her attempts did not emerge from the kiln intact, but failure was likely.

The online sale marked Wang’s auction debut in the West. Flowing pulled in $150,000 against an estimate of $30,000 to $50,000, largely on the strength of its alluring shape. It wasn’t her only work in the sale to break six figures—a second teapot known as Nesting Bird fetched $137,500 against the same estimate. Chen says he was “not surprised at all” that Flowing did so well. “A lot of people came to the exhibition to see the teapot,” he says. “They were drawn to its shape. It’s really elegant and different.”

Christie’s
About the Author