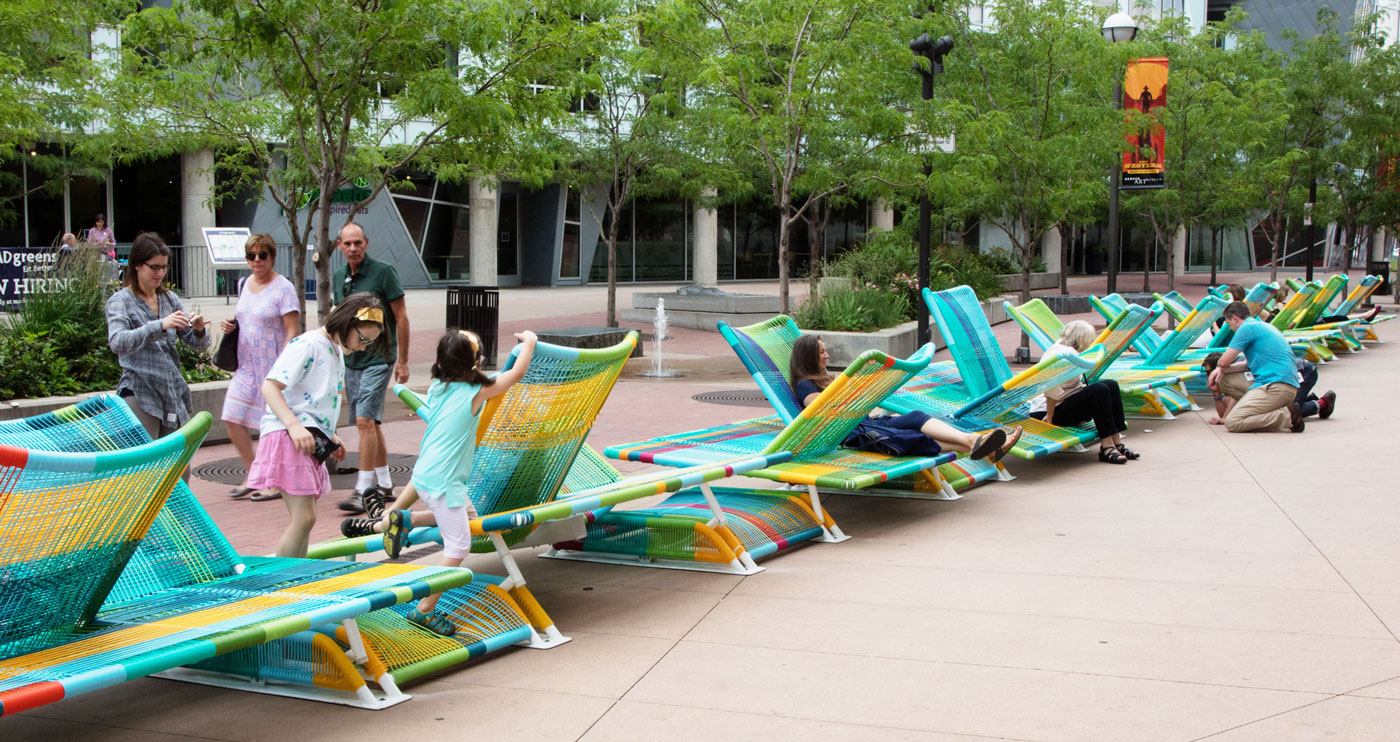 Visitors took a load off on the beautiful and functional rocking chair art installation at the Denver Art Museum. 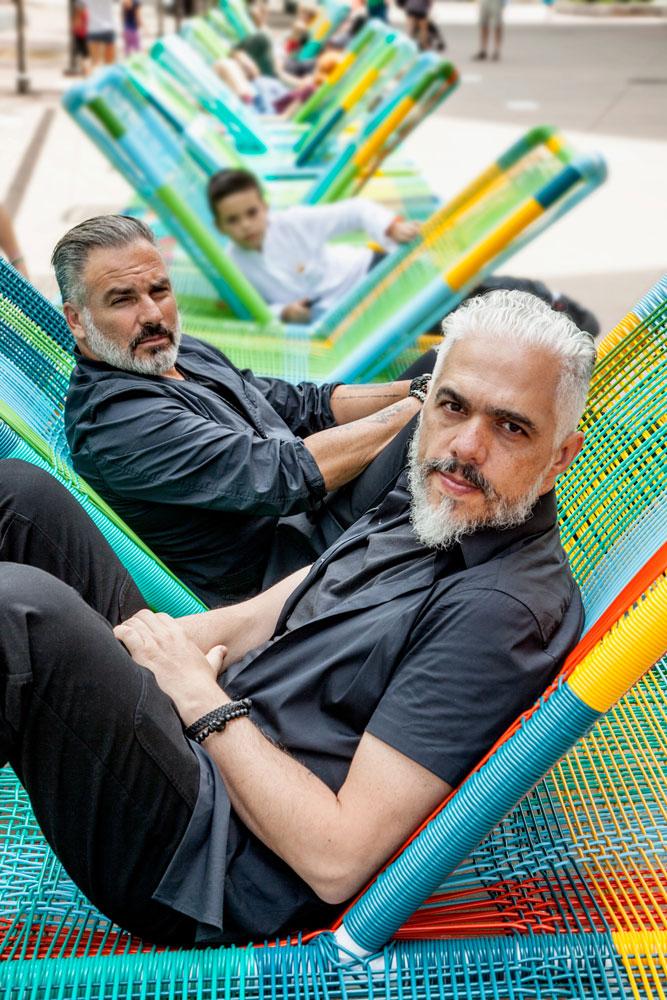 “Our goal has been to have something dynamic—visually and physically—to activate the plaza, something engaging that people could actually get on and play,”

On Martin Plaza outside the Denver Art Museum (DAM), a 90-foot line of 20 musical rocking chairs lures passersby with an ideal place to lounge on an autumn day beneath Colorado’s cobalt-blue-skies. Woven of plastic in juicy, south-of-the-border colors and traditional Mexican patterns, the chairs inspire community encounters.

The DAM commissioned the artful chairs as a free and open-to-the-public kinetic design installation titled La Musidora. The title of the piece hybridizes the Spanish words “la música”—(music) and “la mecedora” (rocking chair). La Musidora plays on the downtown plaza through October 29. And “plays” is the operative verb for the fun installation.

“Our goal has been to have something dynamic—visually and physically—to activate the plaza, something engaging that people could actually get on and play,” said Ann Lambson, the DAM’s Interpretive Specialist for Architecture, Design and Graphics.

“The idea of play was important to the designers and to us. Play is fun and enjoyable, but it’s also the way we learn and experience the world.”

“They are thoughtful designers with a global audience,” Lambson said.

The designers collaborated with weavers in Mexico City. The Mexican colors and weaving patterns appear at home in Denver, part of the American Southwest.

“We’re really proud of our inheritance in crafts, the background that we have as a culture,” said Esrawe in an interview with the DAM.

Lambson first got wind of the design team’s work when she saw Los Trumpos, their take on spinning toy tops at the High Museum of Art in Atlanta.

“Their work on that plaza was another interactive installation, colorful, and meant to be played with,” Lambson said. “People are encouraged to use these objects. They really don’t come alive until being used.”

La Musidora has had two runs at the DAM, in the summers of 2017 and 2019, where the chairs enjoyed plenty of use by visitors of all ages.

“It’s an intuitive piece. When Hector and Ignacio were here earlier this year, it was fun to see people’s expressions. People walk up and know what to do. It’s so inviting and comfortable,” Lambson said.

“We’re so happy with how everybody’s responded to it. We’ve had a lot of posts on social media. In Denver, we have great weather through summer and fall,” Lambson said. “Some people take laptops and work out there. We’ve seen families and friends.”

And all ages have taken a load off in the chairs. A rocking chair can bring to mind a sleeping baby in a nursery or a relaxing elder on a porch.

“A rocking chair evokes a sense of wanting to relax, to settle in,” Lambson said. “These chairs gently rock, and the motion invites visitors to slow down and enjoy the surroundings.”

The Esrawe + Cadena design draws from traditional binary chairs known in Mexico as “tuy y yo,” (you and me), “Confidentes” (confidants), or “De los Enamorados” (for those in love).

“The chairs are in pairs, and one side faces the opposite direction, so it’s you and me looking at one another,” Lambson said.

“The interacting is a key inspiration for anyone to come sit down. There’s an encounter that happens when as a pair of children who are friends face one another, or a couple, or strangers. The encounter is very much about community, weaving our experiences in a very comfortable setting surrounded by fountains and trees. It’s about relaxing and enjoying, rocking together, making music together.”

“Or sleigh bells,” Lambson said. “Each of the ten sets of chairs has its own bell in a box built into the chair. As they tip, the chairs have ten different tones, so people are making music together even if they don’t know people four chairs down.” 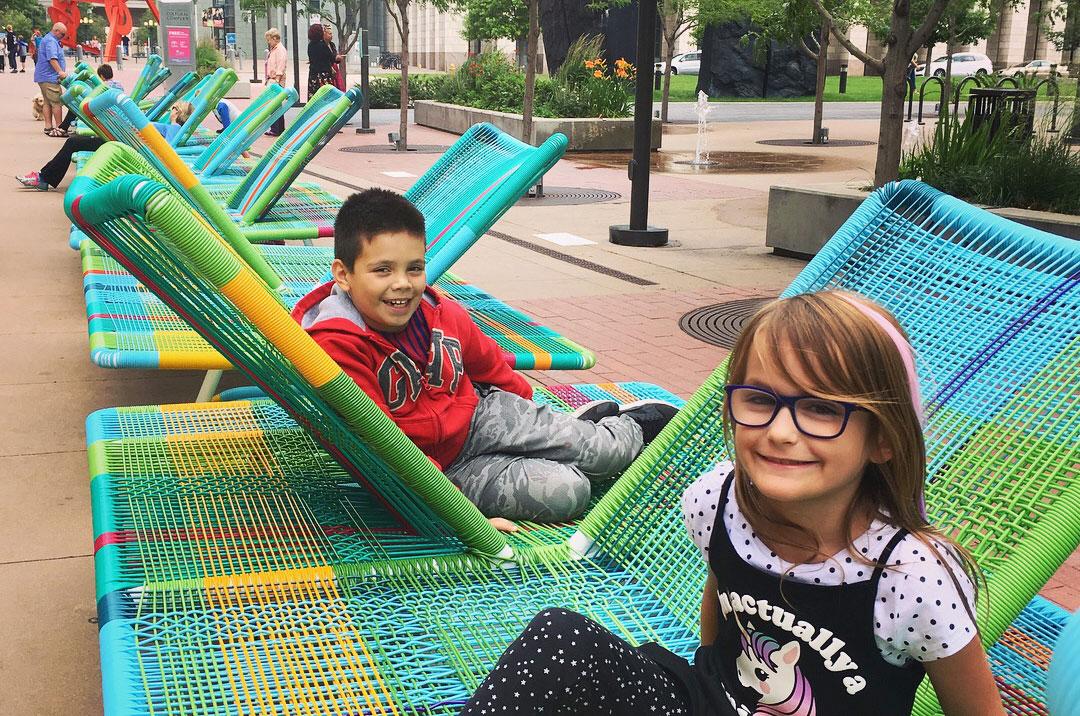 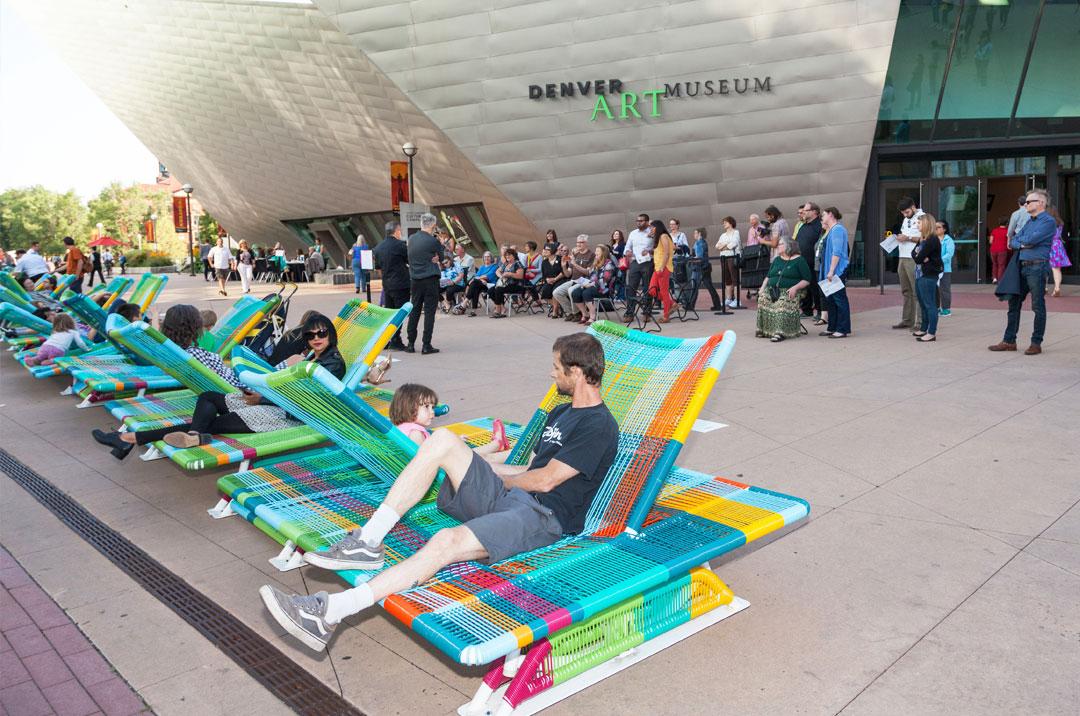 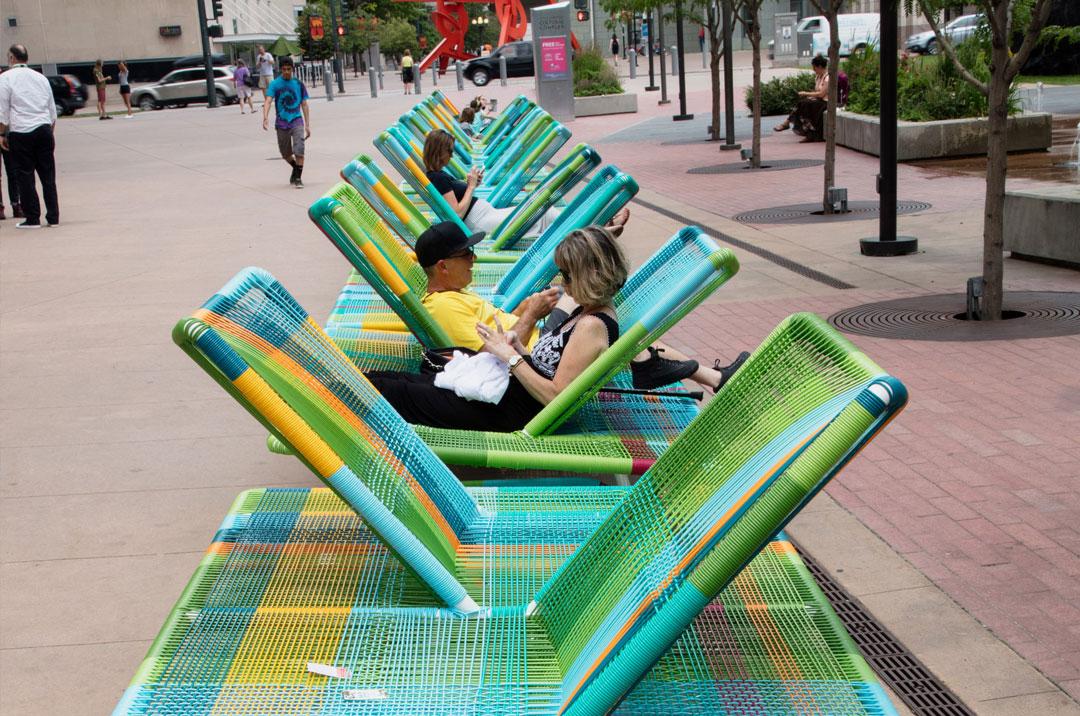 These colorful chaises in front of one of America’s most distinguished art museums may make you wonder where the grill with the hot dogs is located. I'm not just making fun; it’s a fun-making piece—especially in its contrasting environment.

“La Musidora adds to the ambiance of the cultural center highlighted by DAM’S landmark architecture: the North Building by the Italian architect Geo Ponti and the Hamilton Building by German architect Daniel Liebeskind. Also in view from the chairs is the Denver Public Library central branch addition by Michael Graves.

“The installation is very site specific,” said Cynthia Madden Leitner, CEO and founder of the Museum of Outdoor Arts, also known as MOA, in Englewood, CO.

“La Musidora creates whimsical interaction and inspires people to have face-to-face conversations with those they may not know,” she said.

“These colorful chaises in front of one of America’s most distinguished art museums may make you wonder where the grill with the hot dogs is located. I’m not just making fun; it’s a fun-making piece—especially in its contrasting environment.”

Visitors have enjoyed the installation so much they’ve inquired about variations on the La Musidora theme for their homes.

Lambson said, “We’ve had people ask, ‘Can I buy one for my back yard?’”

While the DAM won’t offer variations on La Musidora in its gift shop, the museum does intend to resurrect the installation.

“I hope there’s another life for La Musidora. We’re starting to have conversations about that,” said Lambson. “We might bring it back out or find another location where it would make sense.”

La Musidora was supported in part by the PB and K Family Foundation with the Mexican Cultural Center as promotional partners.

The DAM’s collection also includes more traditional chairs by William Morris and Frank Lloyd Wright, as well as English, French and Italian designs from the 1600s and 1700s.

All told, there’s not a bad seat in the house.