The Kaiser Who Abdicated
and Took the Porcelain

The Grotto Hall at Neues Palais in Potsdam. 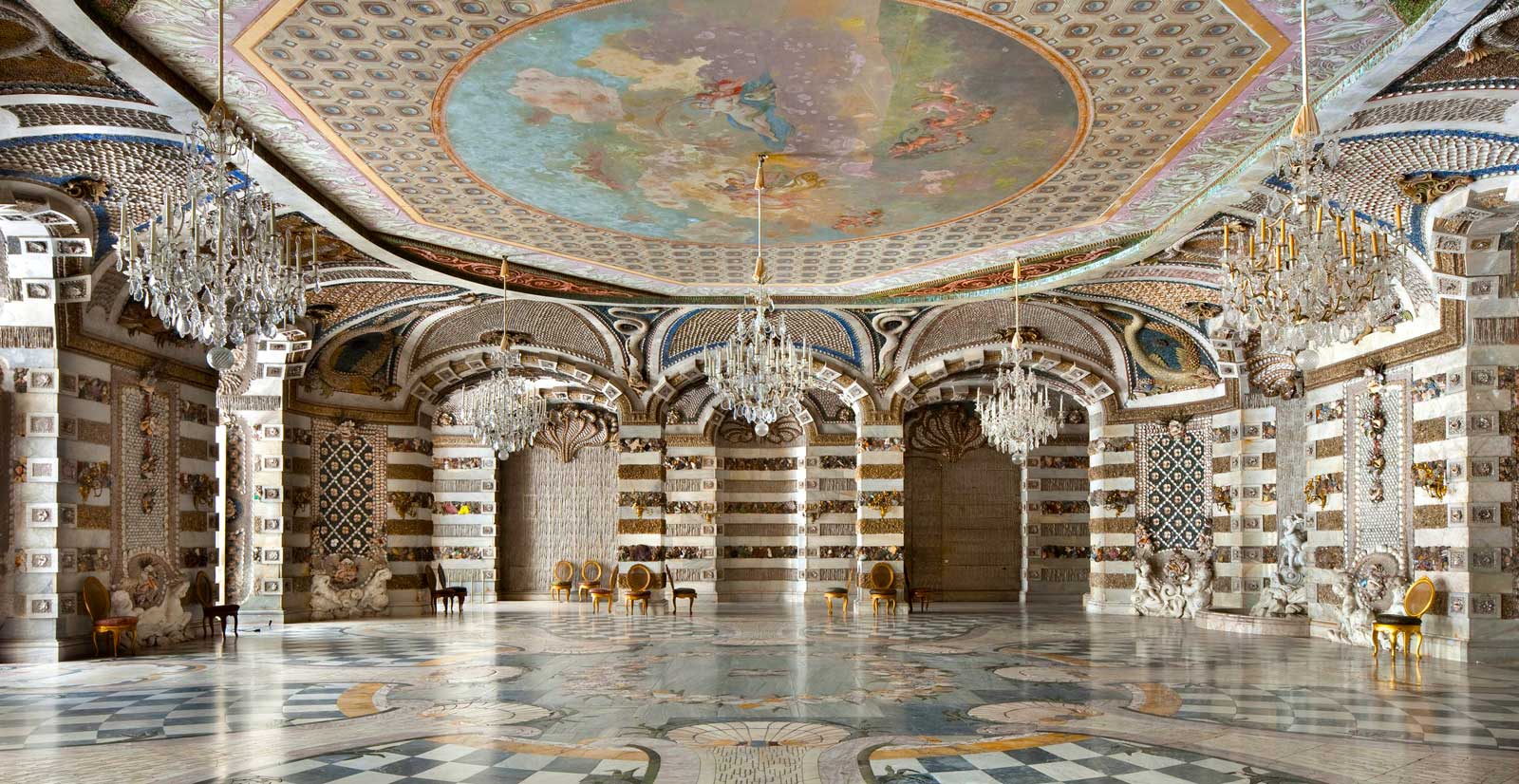 Photo: Achim Bednorz, © Stiftung Preußische Schlösser und Gärten Berlin-Brandenburg
The Grotto Hall at Neues Palais in Potsdam.
After a hundred years abroad, a unique collection preserved by a fleeing monarch is returned to its home.

After a hundred years abroad, a unique collection preserved by a fleeing monarch is returned to its home. 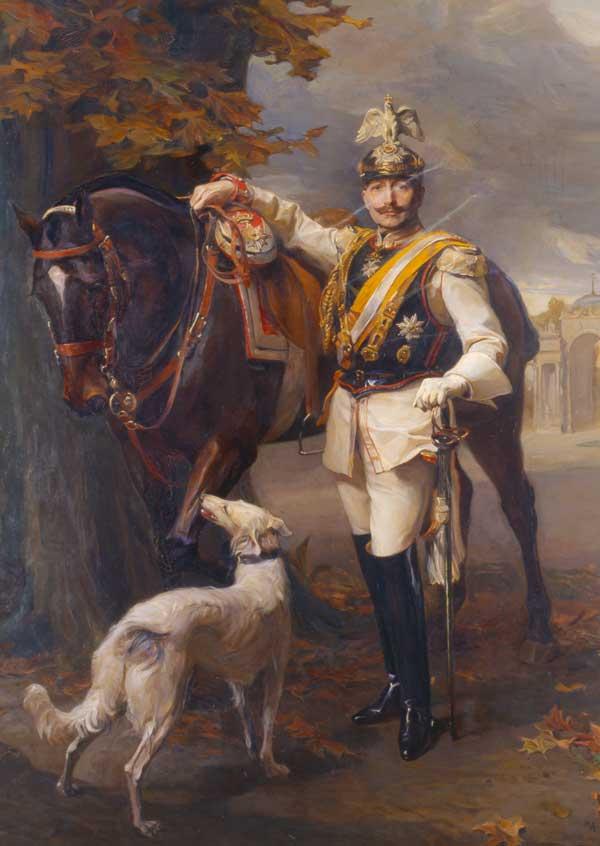 One of the questions that preoccupied Kirschstein while preparing the exhibition was how the Kaiser had managed to keep hold of so much of the palace art and furnishings.

Kaiser Wilhelm II, Germany’s last emperor, dined for the last time at the Neues Palais, the Baroque royal palace in Potsdam on October 29, 1918. Revolution was in the air, and demands for his abdication in the face of Germany’s defeat in World War I were growing louder.

Dinner with his wife Augusta Victoria and his son Prince Oskar was at 8 p.m. The Kaiser left for Belgium at 11 p.m. on the imperial train from the station he had had built by the palace. He would never return to Germany. On November 9, his abdication was announced by Chancellor Max von Baden.

The Neues Palais, the last palace built by Wilhelm’s ancestor Frederick the Great in Potsdam’s Sanssouci complex, hosted a small exhibition in 2018 called Kaiserdämmerung (The Twilight of the Emperor) to mark the centenary of the Kaiser’s abdication. It threads through the palace’s ornate chambers and focuses on the confusion of those final days–the hasty packing, the haggling over artworks, the desertion of the guards and the ever-present danger that the chaos on the streets of Berlin could penetrate the stately grandeur of the royal estate. The Kaiser’s family was only too aware of the bloodbath that had befallen the Czar’s family just four months earlier.

The table in the Kaiser’s private dining room at the Neues Palais, known as the Apollo Hall, was once more set as though for that last supper, with porcelain from the royal manufacturer KPM. While the rest of Germany was reduced to eating turnips during the war, the imperial family still ate well–even if the government propaganda machine conveyed the impression that they were sharing the hardships of the general population.

The 300-room Neues Palais is ostentatiously magnificent, designed to demonstrate Prussia’s consolidation of power after victory in the Seven Years’ War in 1763. It stands in stark contrast to the charm and intimacy of the older Sanssouci palace, where Frederick the Great indulged his love of the arts.

With 400 sculptures on its 220-meter long façade, gilded Rococo ceilings, elaborate marquetry floors and magnificent chandeliers, the Neues Palais also boasts one of the only remaining 18th-century theaters that is still in use (this is currently undergoing renovation and will reopen to the public next year). But perhaps its most remarkable feature is the Grotto Hall. Though its grays and blues are more subdued than the golds, reds and yellows of some of the upstairs chambers, its ceiling is adorned with sea monsters and shell decorations; the walls are encrusted with horizontal layers of precious stones, fossils, shells and ammonites.

After Frederick the Great’s reign, the palace was only used for festive occasions for a while. But as a child, Wilhelm II spent summers in the Neues Palais, and he associated it with happy memories and an escape from Berlin.

“Here in Berlin we almost always felt like prisoners… so we were delighted when we moved to Potsdam in spring,” he wrote. In 1889, the year after he ascended to the throne, he made the Neues Palais the main imperial residence. He added stables, the rail station, and a garden terrace. Bathrooms and toilets were installed, and in 1900, the palace was supplied with electricity. 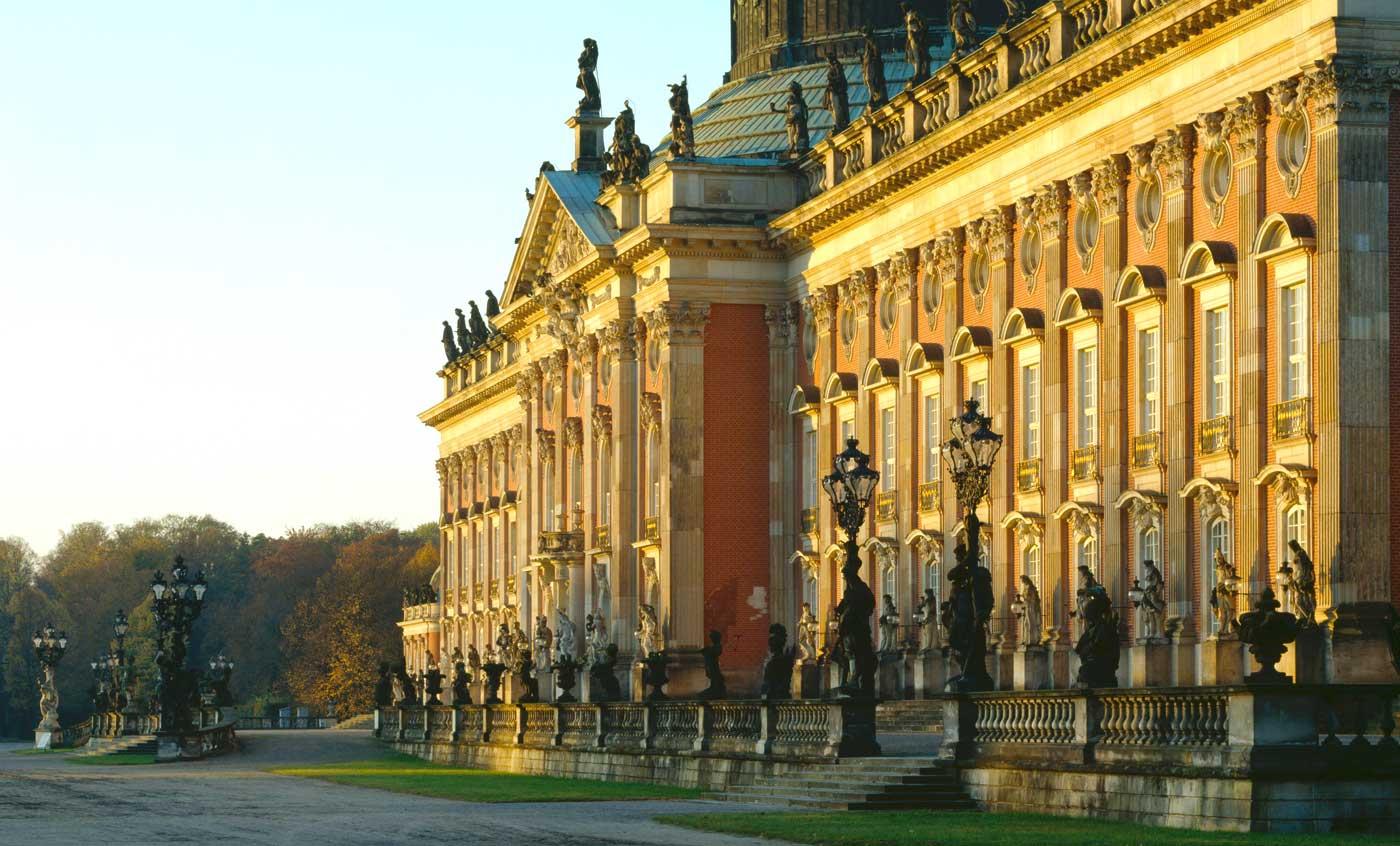 The exterior of the Neues Palais in Potsdam. 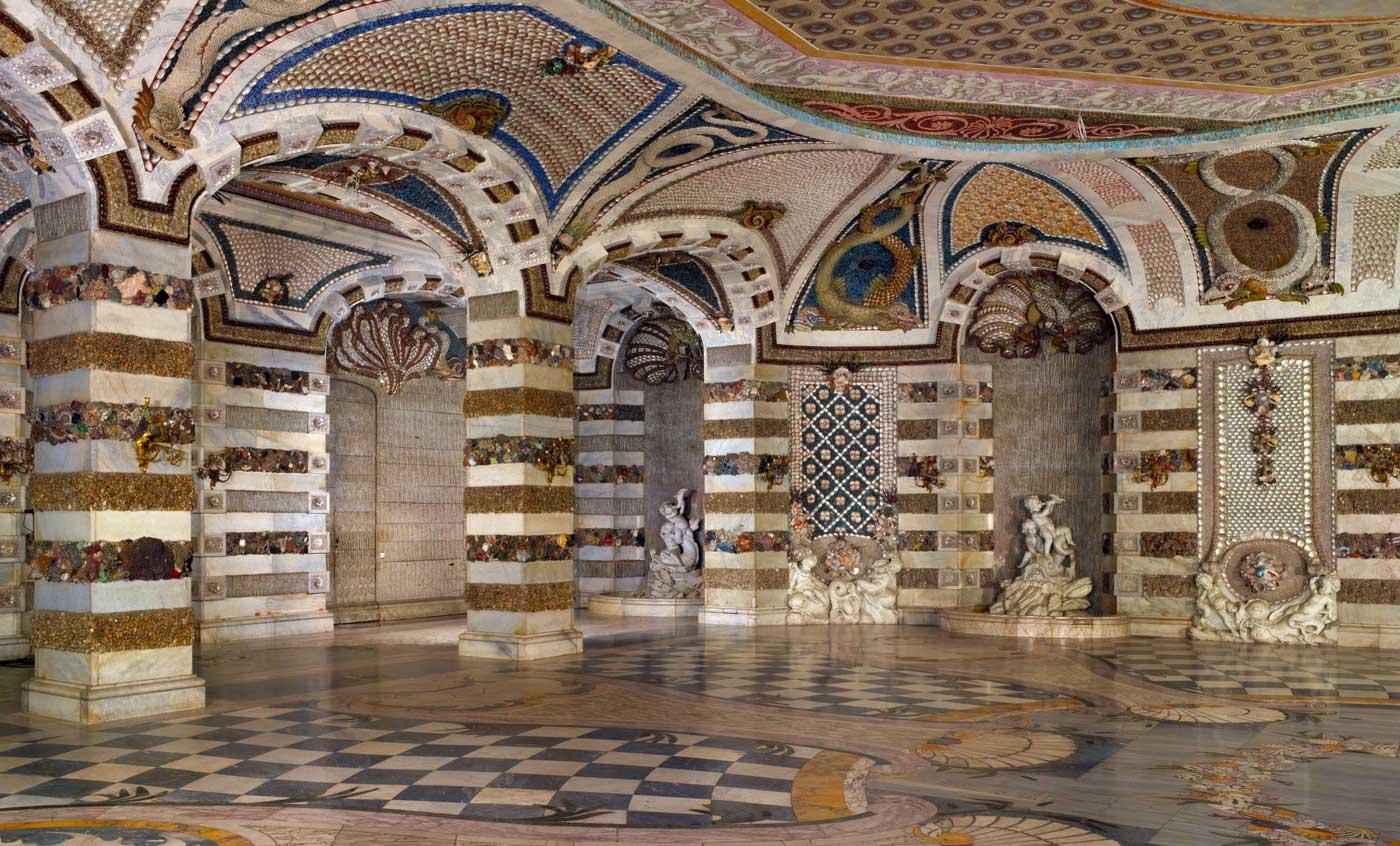 The Grotto Hall at Neues Palais in Potsdam. 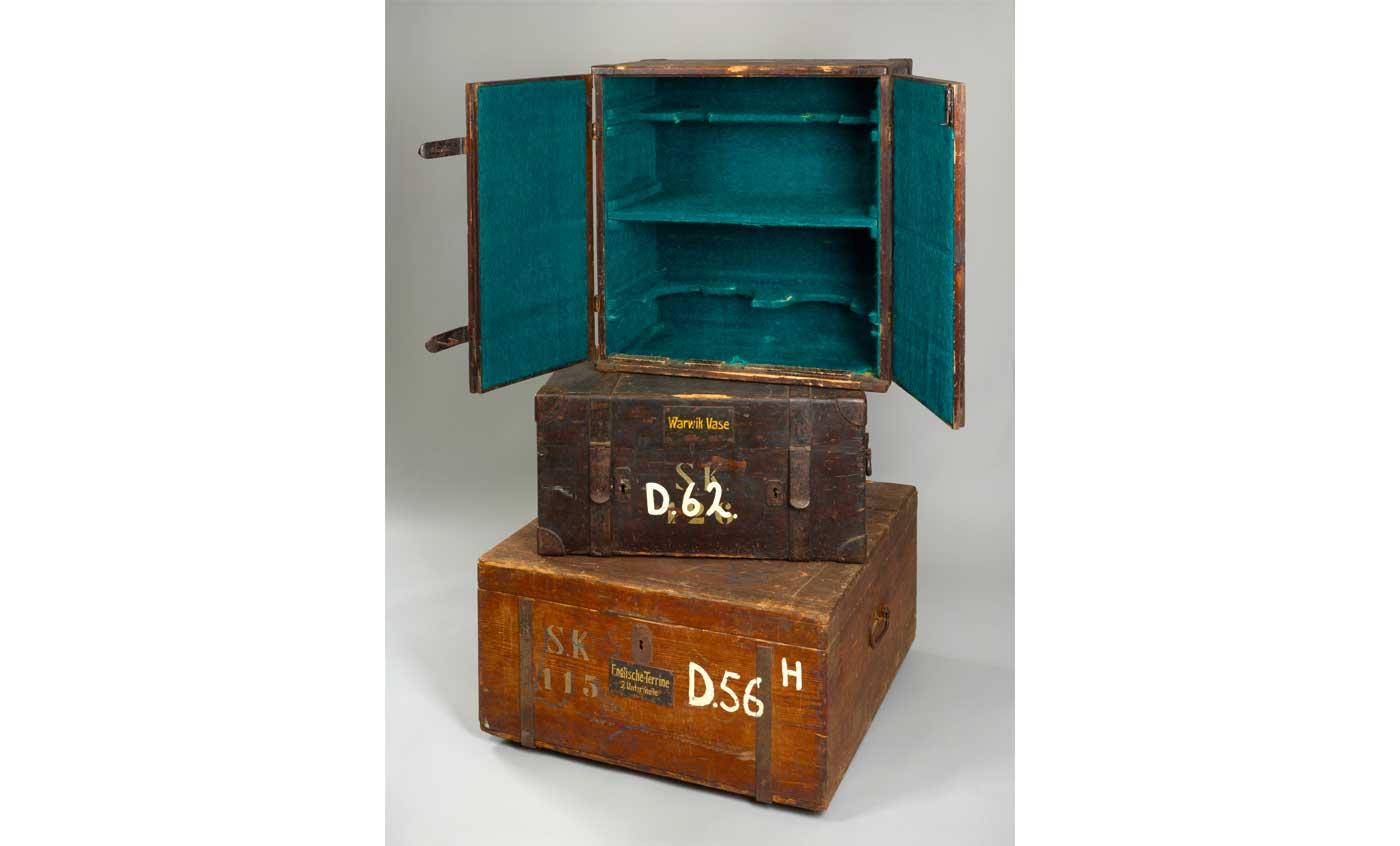 Packing cases dating from 1918 at the Neues Palais, Potsdam, Germany. 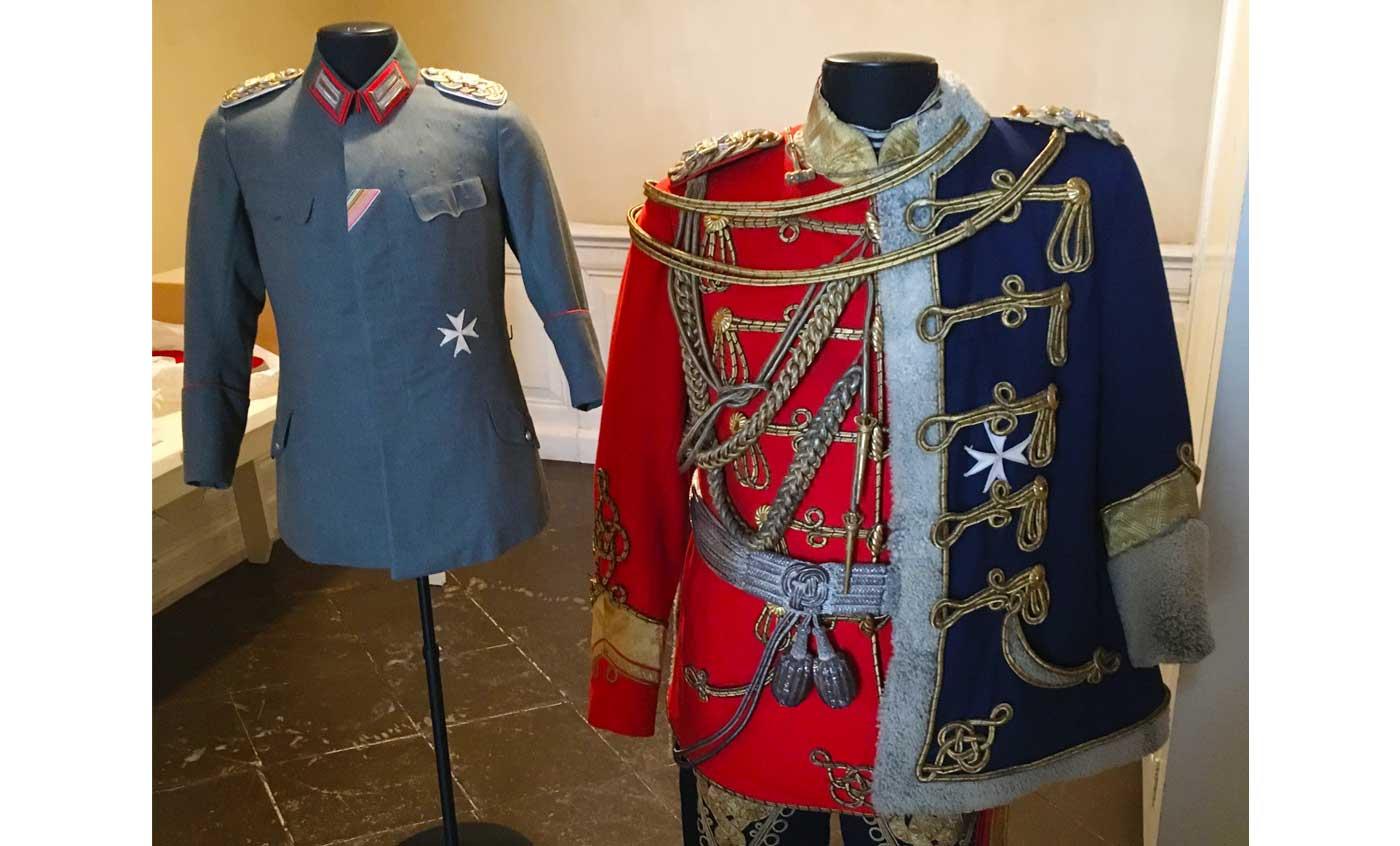 Uniforms belonging to Kaiser Wilhelm II on display at the Neues Palais, Potsdam. The uniforms are on loan for the exhibition “Kaiserdämmerung” from Haus Doorn in the Netherlands. 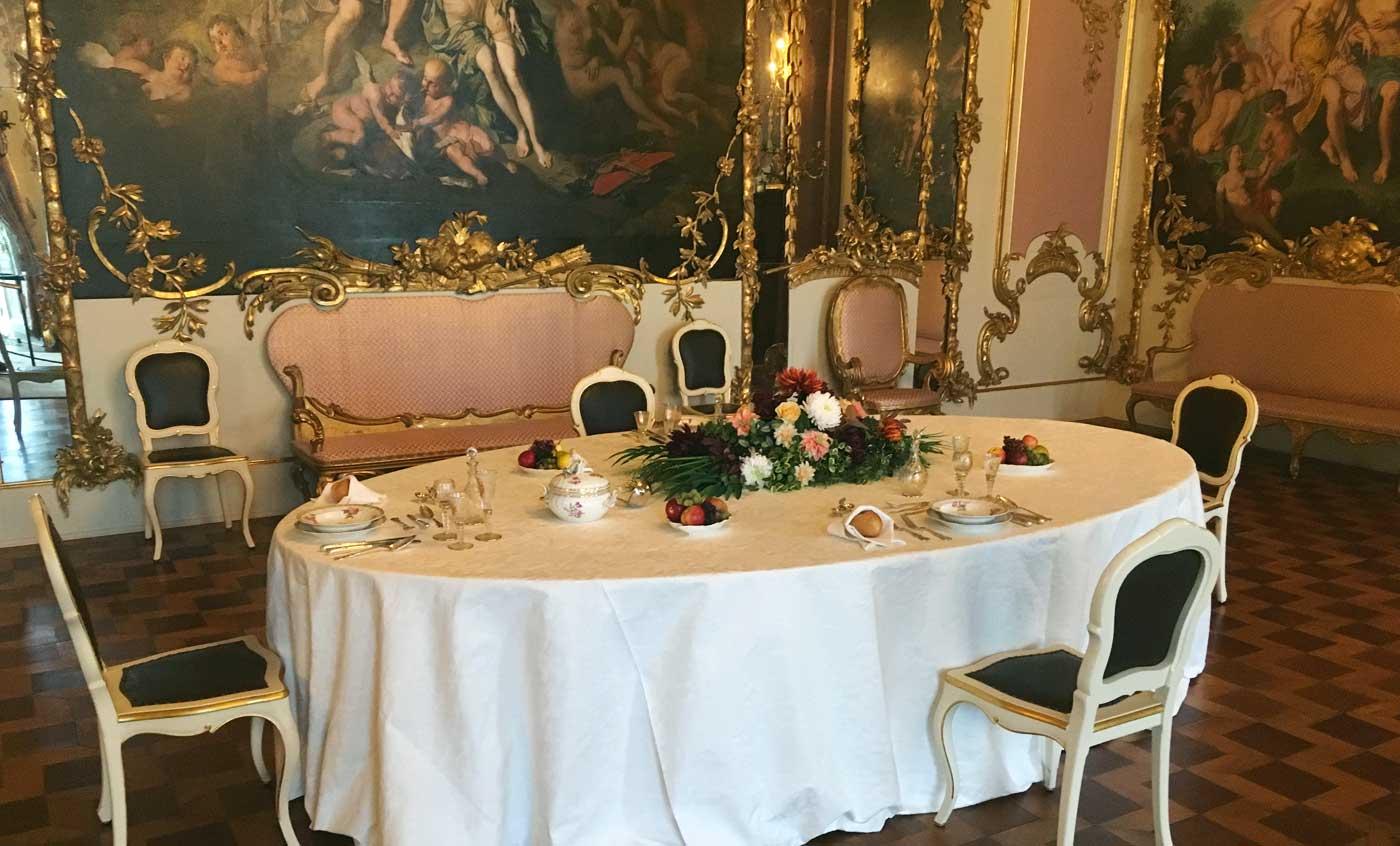 The table in the dining room at the Neues Palais is set as for the Kaiser‘s last dinner there on Oct. 29, 1918. Porcelain, glass and silver are on loan for the exhibition “Kaiserdämmerung” from Haus Doorn in the Netherlands. 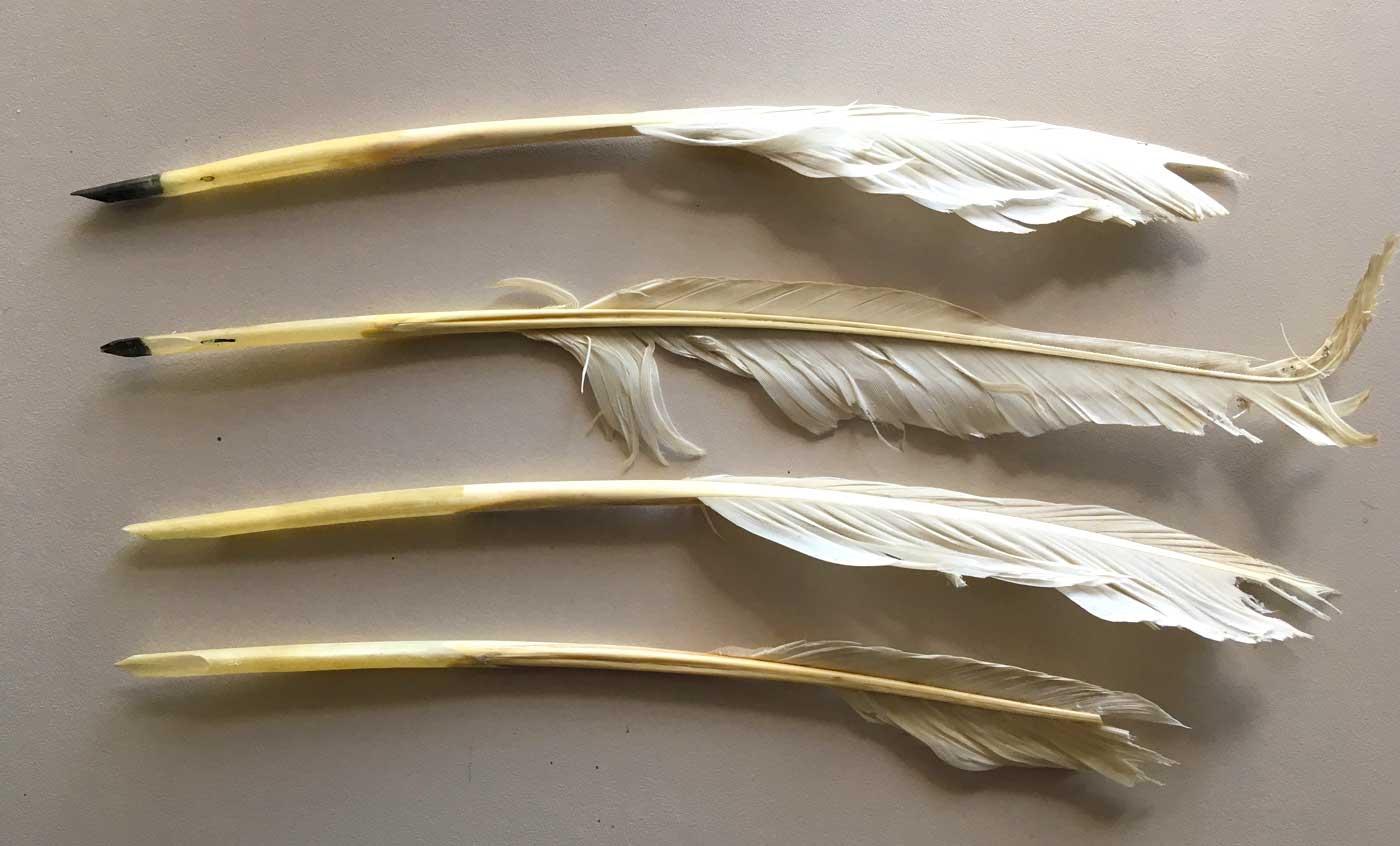 Four goose quills that were probably used by Auguste Victoria. 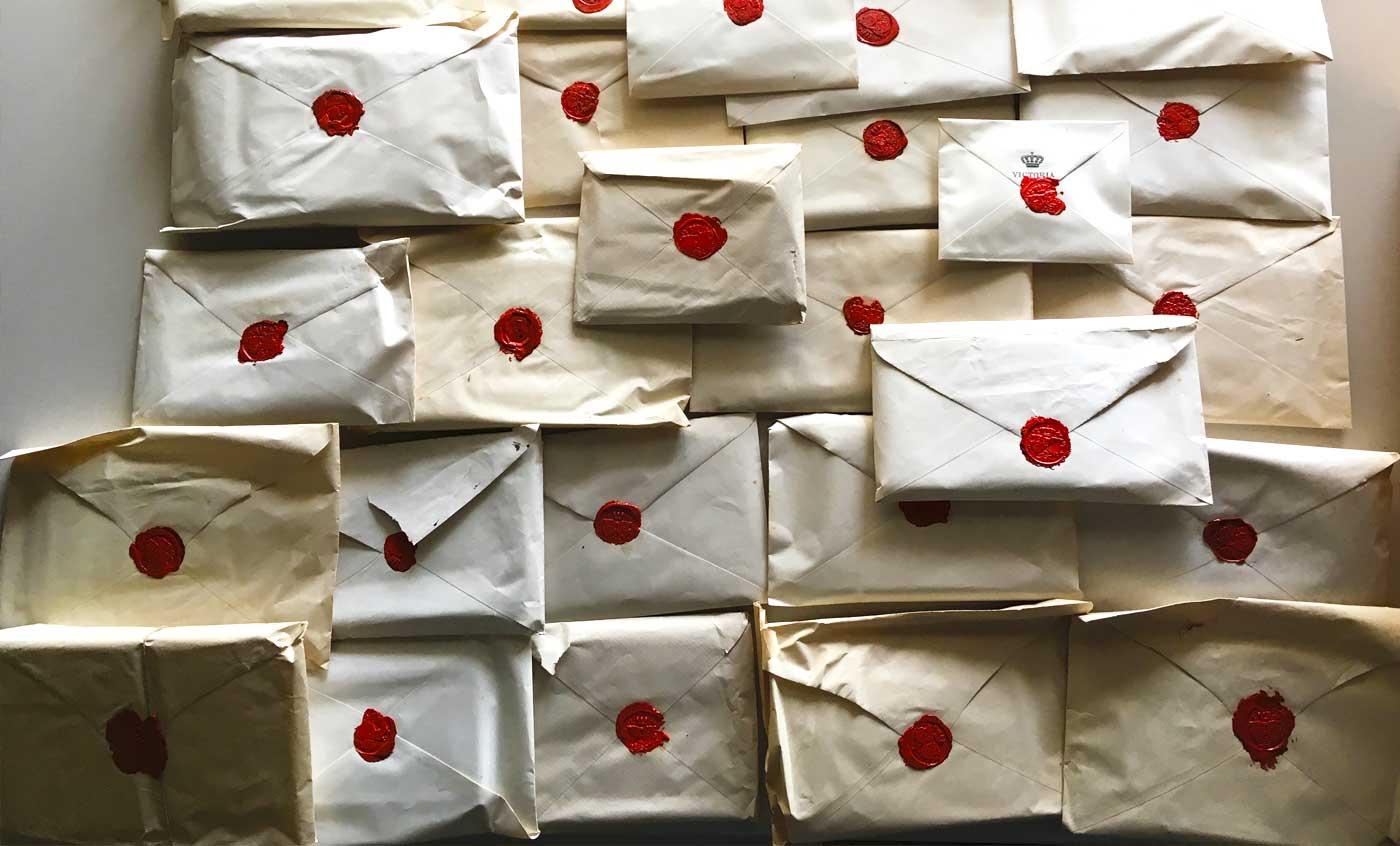 The letters to Auguste Victoria survived over 100 years in a hidden closet.

No wonder Augusta Victoria found it difficult to leave such a sumptuous home. On November 10, the day after the announcement of her husband’s abdication, she wrote to her sister. “I am still physically fit but I cannot express the suffering and grief in my heart,” says the letter, on display in the exhibition. “My poor Wilhelm, if only I could be with him, it would be easier to bear.”

Augusta Victoria was anxious to join the Kaiser in his Dutch exile, but there were delays in obtaining the necessary consent from the Dutch government. Her departure was postponed, and fears for her safety increased as the guards protecting the palace absconded. 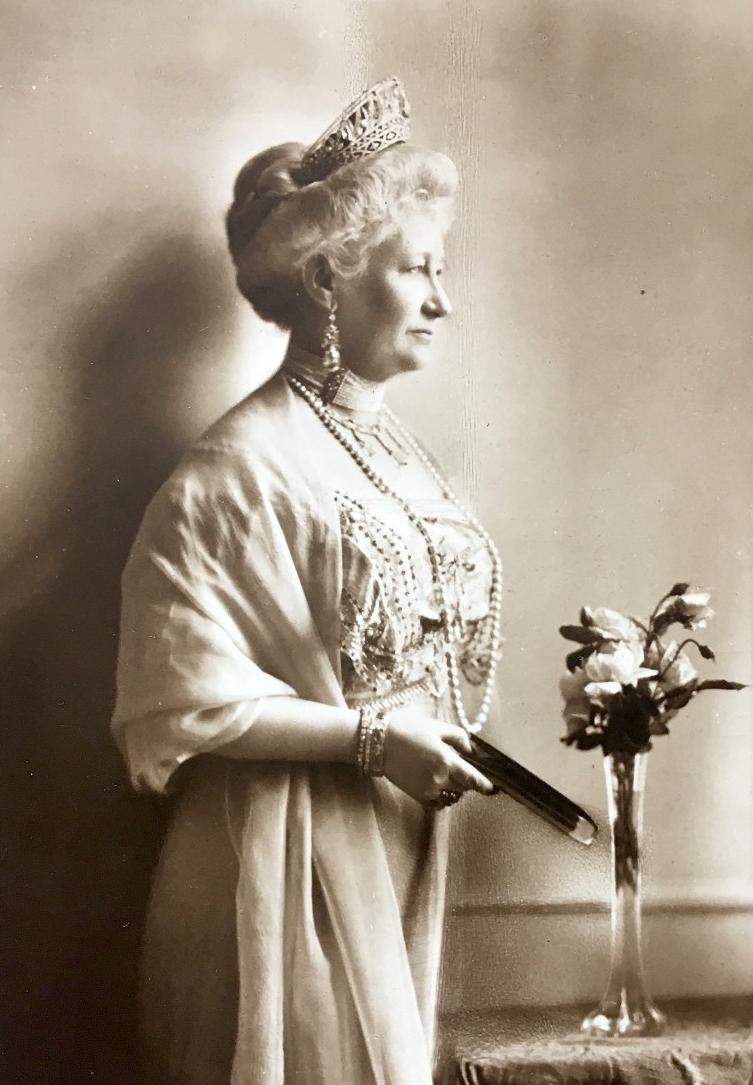 She left the palace on November 21 to hide out in a Potsdam villa belonging to one of her sons. “The Lord leads us along difficult paths, and it is hard to pray ‘thy will be done,’” she wrote to her sister the day after. “Pray for us, we need it more than ever.” A week later, Augusta Victoria left for the Netherlands and safety. The palace would never again serve as a royal residence.

But it was spared the plunder and damage that befell the royal place in Berlin. “Potsdam was a city for the military and the aristocracy, and there were no revolutionary mobs here,” said Jörg Kirschstein, the curator of Kaiserdämmerung.

While preparing the exhibition, curators made an exciting 130-year-old discovery. In Augusta Victoria’s dressing room, above an empty safe, they found a hidden wooden door that hadn’t been opened since she left. In the secret cabinet behind it were two oak boxes, a leather case and a folder of documents. They contained roughly 1,000 letters written to the Empress.

“It’s a sensational find,” Kirschstein said. “It seems that no one had ever got a ladder to open this cupboard before–perhaps because they were distracted by the metal safe.”

One of the boxes–last locked in 1886–was slightly broken. Experts opened it to find letters dating from 1883 to 1886, including from Augusta Victoria’s predecessor, Kaiserin Augusta. The second box, which has yet to be opened, bears a label describing the contents as letters about her sons. Also unopened is a sheaf of letters from Augusta Victoria’s great-aunt and godmother, Queen Victoria of England, found in the leather case.

The boxes, leather case, and letters were on display in the exhibition, and were opened and examined by scholars in detail after it finished. Kirschstein said the palace is planning to publish the letters online in 2021, the centenary of Augusta Victoria’s death. “There will be lots of interesting details about Augusta Victoria and her family life,” Kirschstein said. “It won’t, though, be a question of rewriting history.”

One of the questions that preoccupied Kirschstein while preparing the exhibition was how the Kaiser had managed to keep hold of so much of the palace art and furnishings. The porcelain on display in the dining room, for instance, was loaned for the show from the Huis Doorn Museum in the Netherlands, the imperial residence in exile where Wilhelm lived until his death in 1941.

Wilhelm signed his abdication documents on November 28–on condition that he could keep his possessions and that his family would be protected. Between 1919 and 1920, 63 railway wagons transported furniture, art, porcelain and silver to the imperial couple’s new home in the Netherlands. A second wave of deliveries from the palace’s inventory followed in 1925–and this was even bigger than the first.

“The Kaiser could count himself lucky,” Kirschstein said. “In addition to his art and furniture, he got 66 million marks.”

Also on loan from Huis Doorn are the military uniforms the Kaiser insisted on wearing for the rest of his life. He died in exile in 1941, never setting eyes on the Neues Palais again.

“He never accepted that he wouldn’t return to rule Germany,” Kirschstein said. “He still had former court tailors cut his uniforms in Potsdam, Kiel and Doorn.”