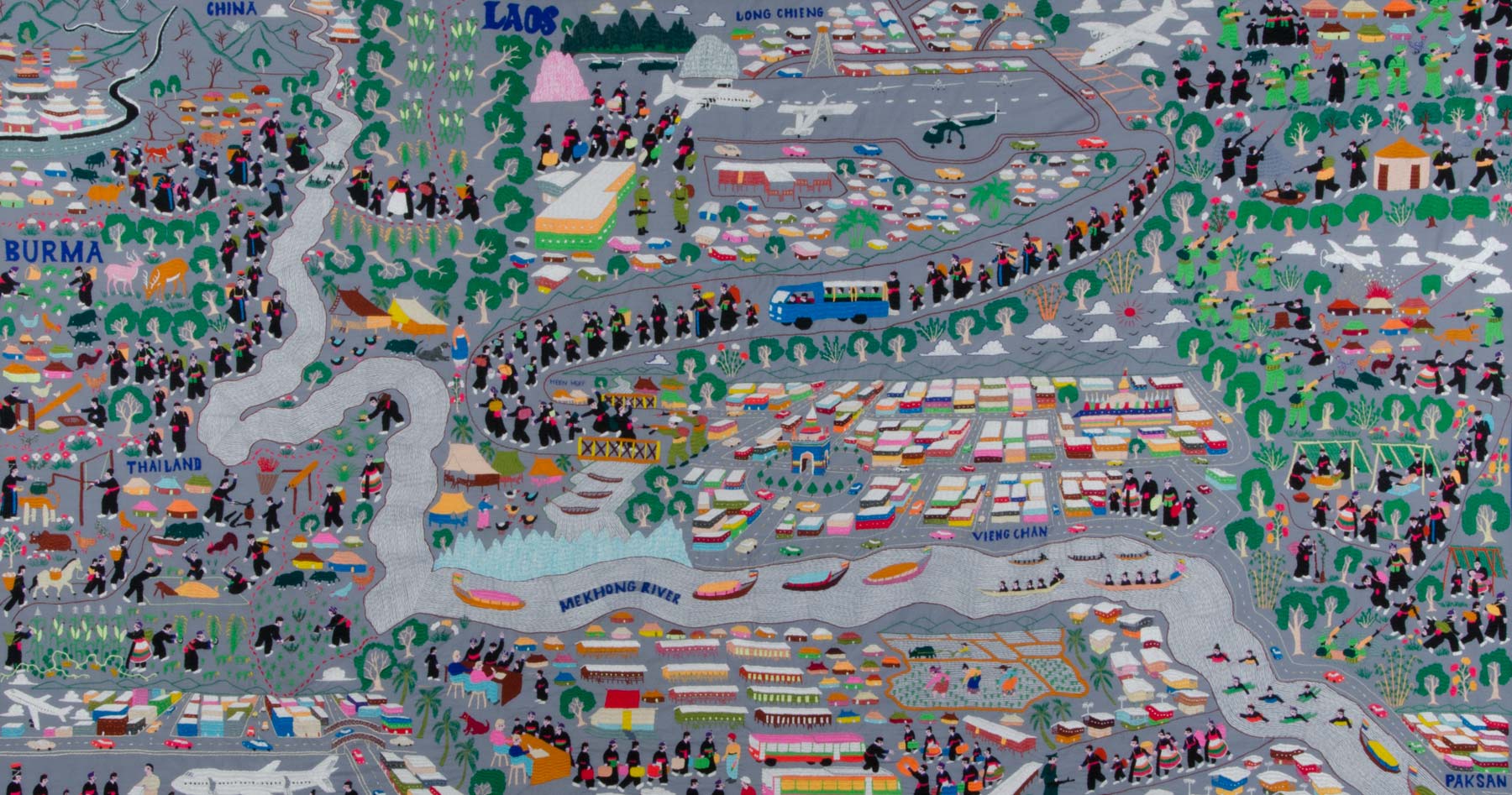 Why do people make art in times of trouble? 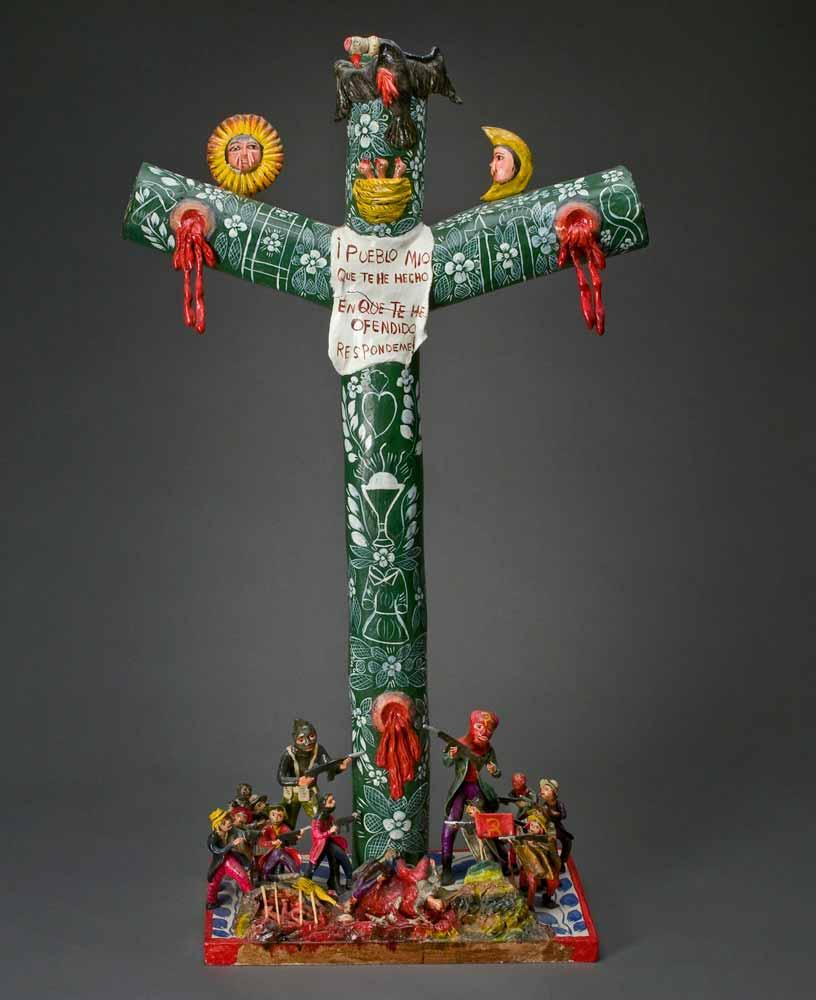 “Whatever your background or political leanings, there is something here for you and a way for people to bridge gaps that sometimes seem unbridgeable,”

The Museum of International Folk Art in Santa Fe, New Mexico claims the world’s largest collection of folk art. The museum’s website displays 130,000-plus objects from more than 100 countries. Online, an alphabetical listing indicates the depth of all the forms making up the category of folk art. The digital catalog begins with the letter “A” for amulets, angels, anklets, apothecary jars, aprons, ashtrays, and axes on to “B” for baby shoes, bags, basins, baskets, beads, belts, birdcages, bowls, and so on through the alphabet.

The museum’s collection includes textiles, paintings, pottery, sculpture, and every other form of fine art, as well as kinetic toys, musical instruments, and sundry decorative or utilitarian objects from everyday life or high ceremony. And the Museum of International Folk Art collection demonstrates clearly that every culture creates folk art.

“No matter what your political views are or which society you come from, there is folk art,” says Khristaan Villela, the folk art museum’s executive director since 2016. 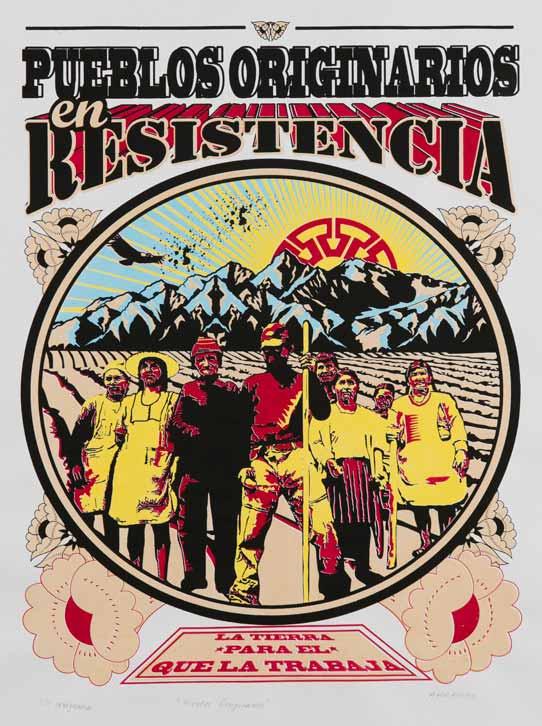 The museum emphasizes that no one definition encompasses folk art, but guidelines for the collection describe folk art as “of, by, and for the people; all people, inclusive of class, status, culture, community, ethnicity, gender, and religion.”

Folk art is humanity’s visual storytelling. And the stories oftentimes are subversive, encoded tales conveyed during trials or about tribulations.

“In our tradition, folk art is not just a lone voice,” Villela explains. “There are a number of people making these objects, often with techniques passed down from master to apprentice, elder to younger, as with Navajo weavings or Native American pottery. In communities with these traditions, it was a social opportunity to get together and discuss current events and things in people’s lives while making art.”

Since the museum’s inception in 1953, exhibitions have showcased social justice issues oftentimes woven into, painted onto or otherwise part of folk arts. A former art history professor, Villela highlighted the museum’s status in the International Coalition of Sites of Conscience.

“Most [Sites of Conscience] are Holocaust museums or museums of memory that commemorate traumatic events,” Villela said. “Some commemorate incidents or years-long histories of brutal dictatorships murdering people.”

The folk art museum’s Gallery of Conscience has presented numerous exhibitions that spotlighted folk art created in response to oppression of women around the world, the scourge of AIDS, injustices associated with immigration, Japanese-American internment camps, and other displacements.

Villela cited a 2017 exhibit of Peruvian folk art: “This Latin American folk art reflected on the political situation in Peru, a twenty-year civil war, The Shining Path, up to 80,000 people disappeared, killed, many indigenous,” he said. 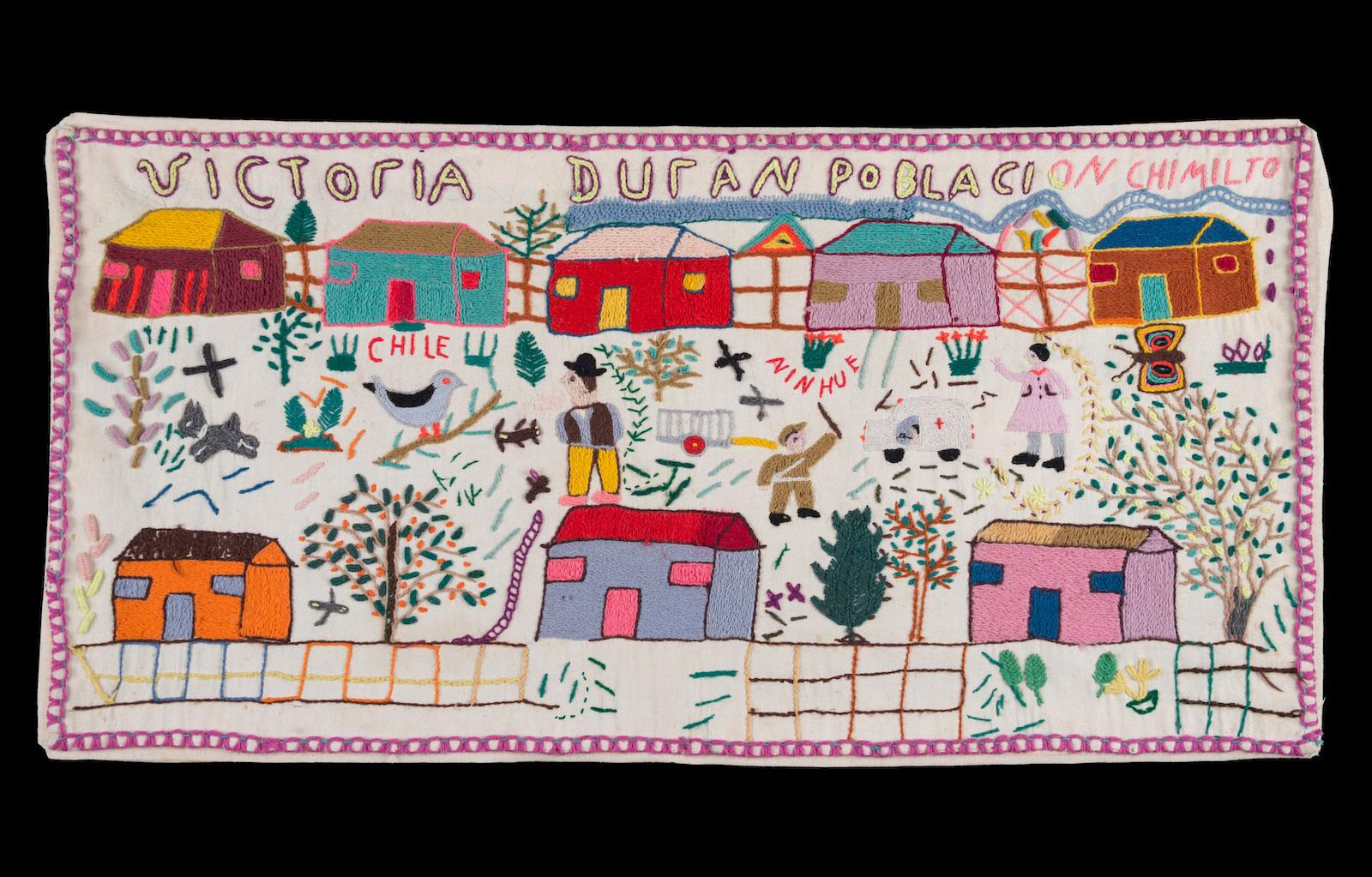 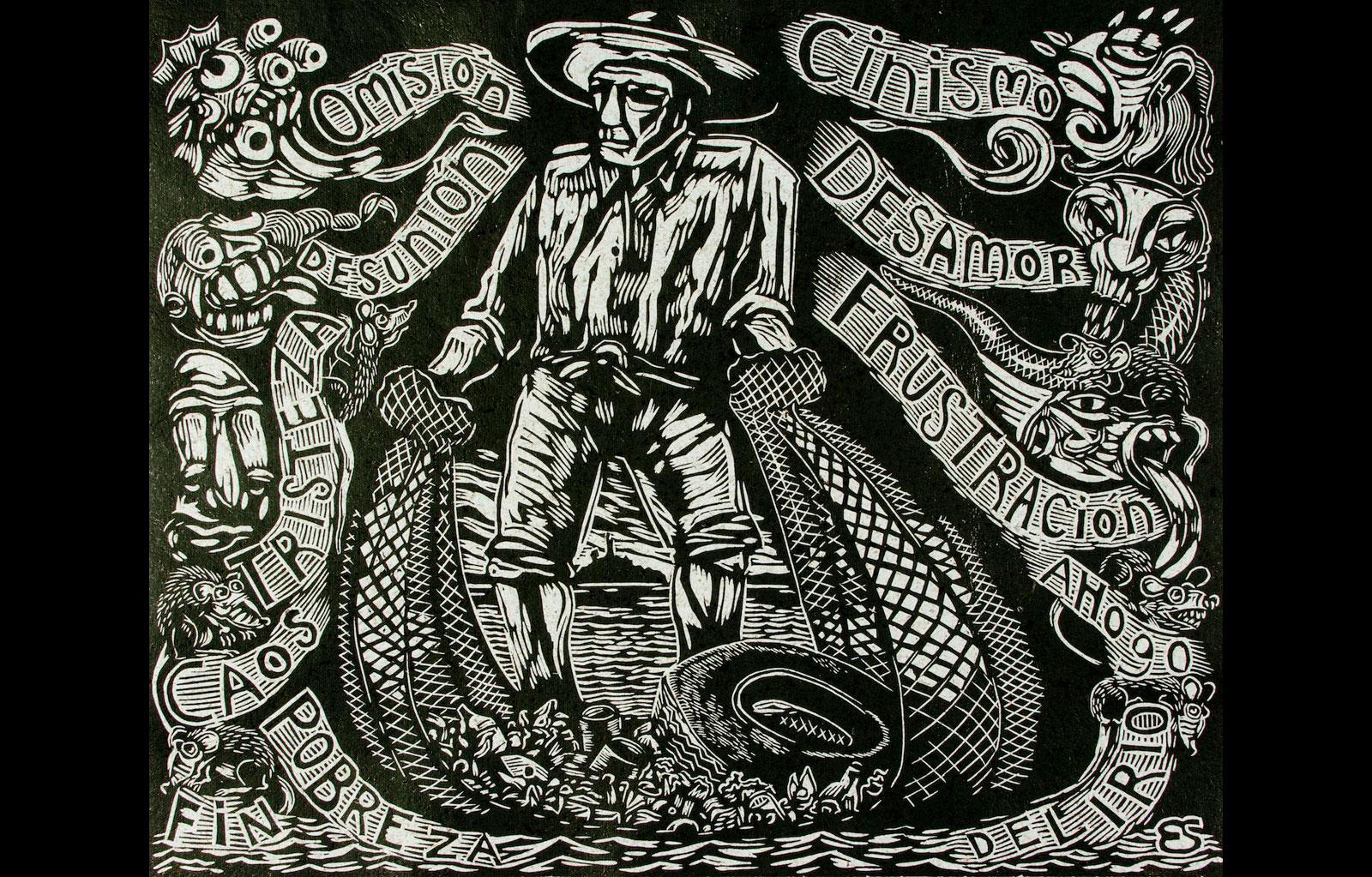 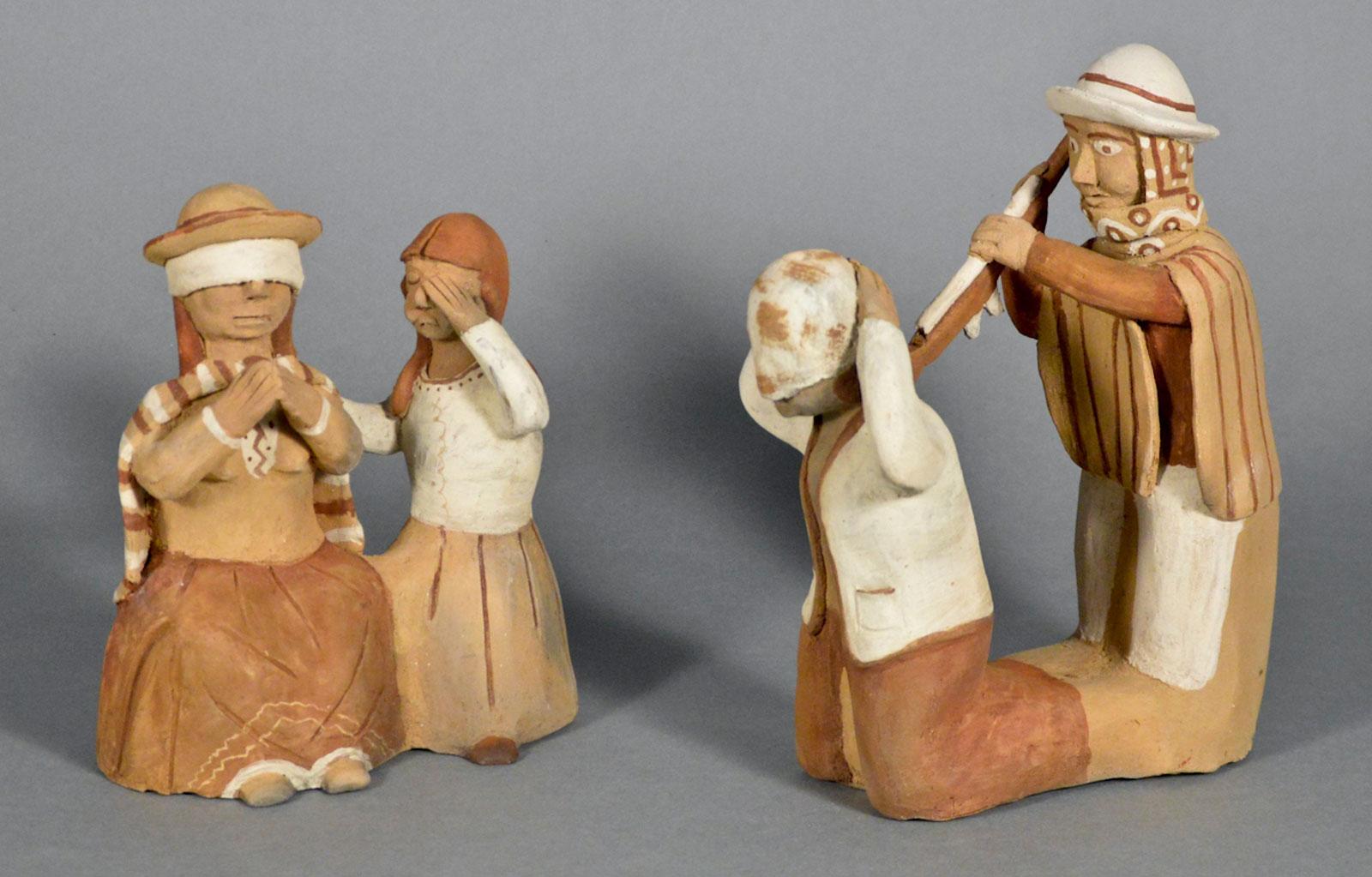 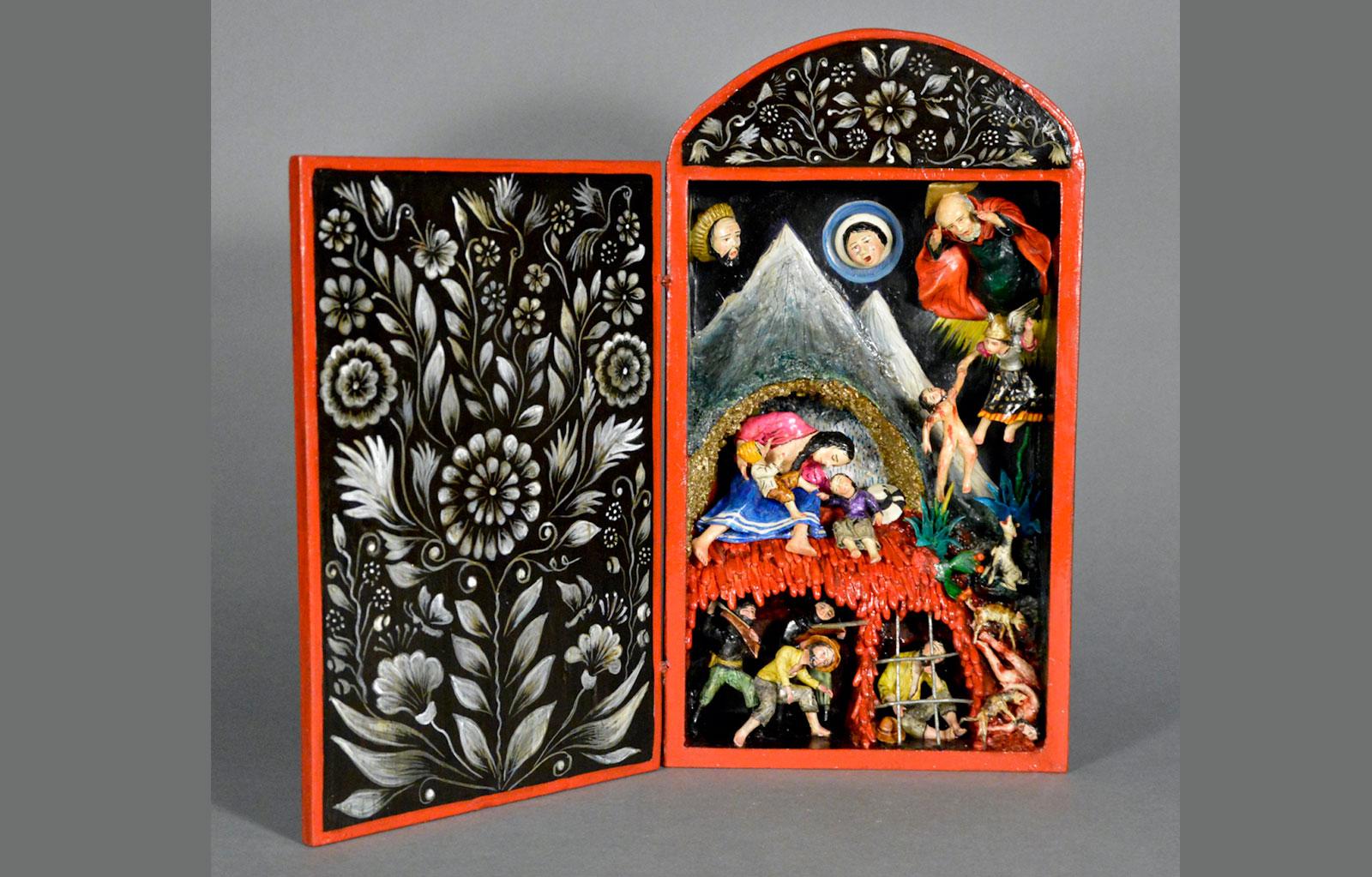 Edilberto Jiménez Quispe, The Dream of the Woman from Huamanga, 2017. 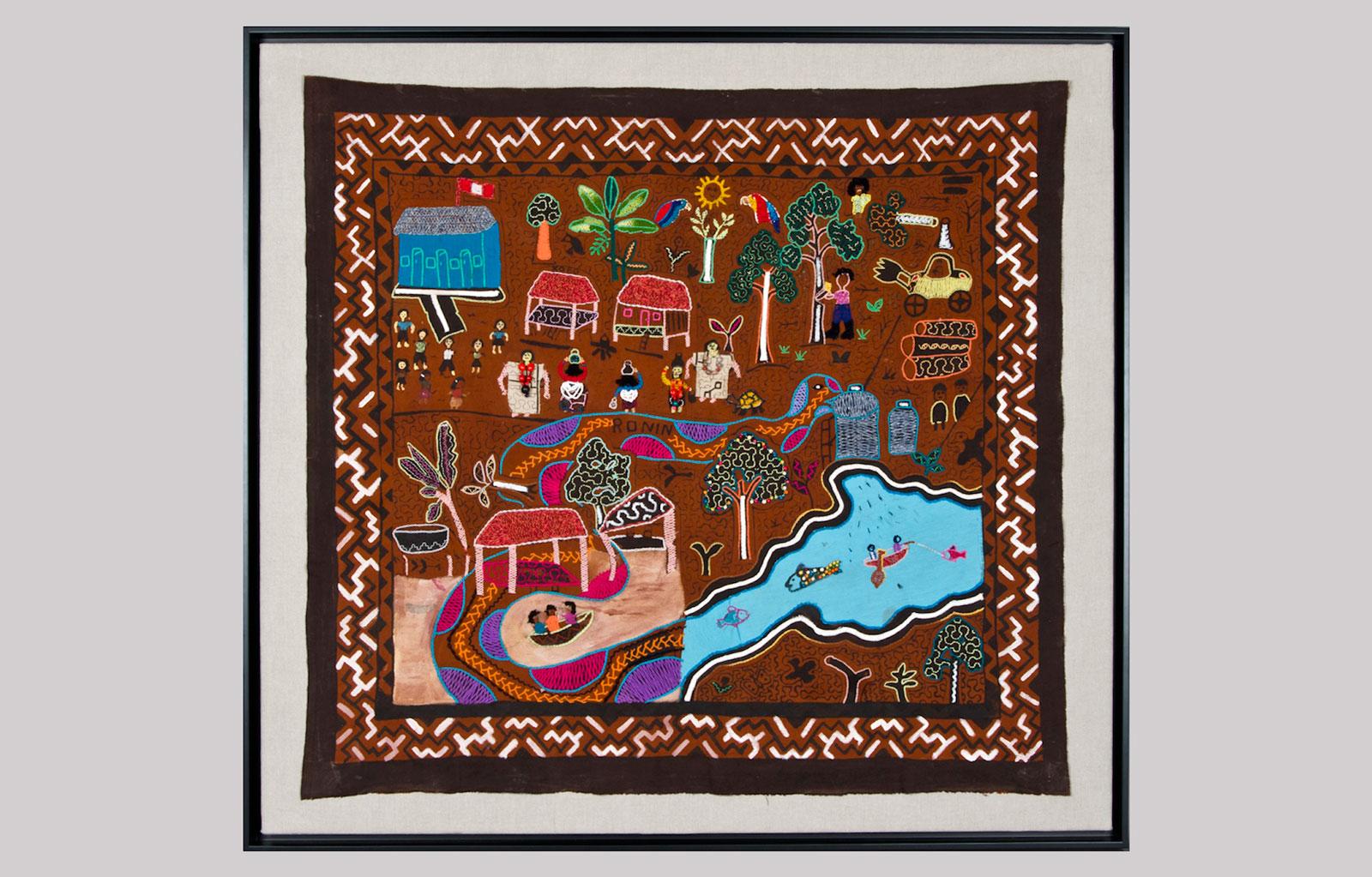 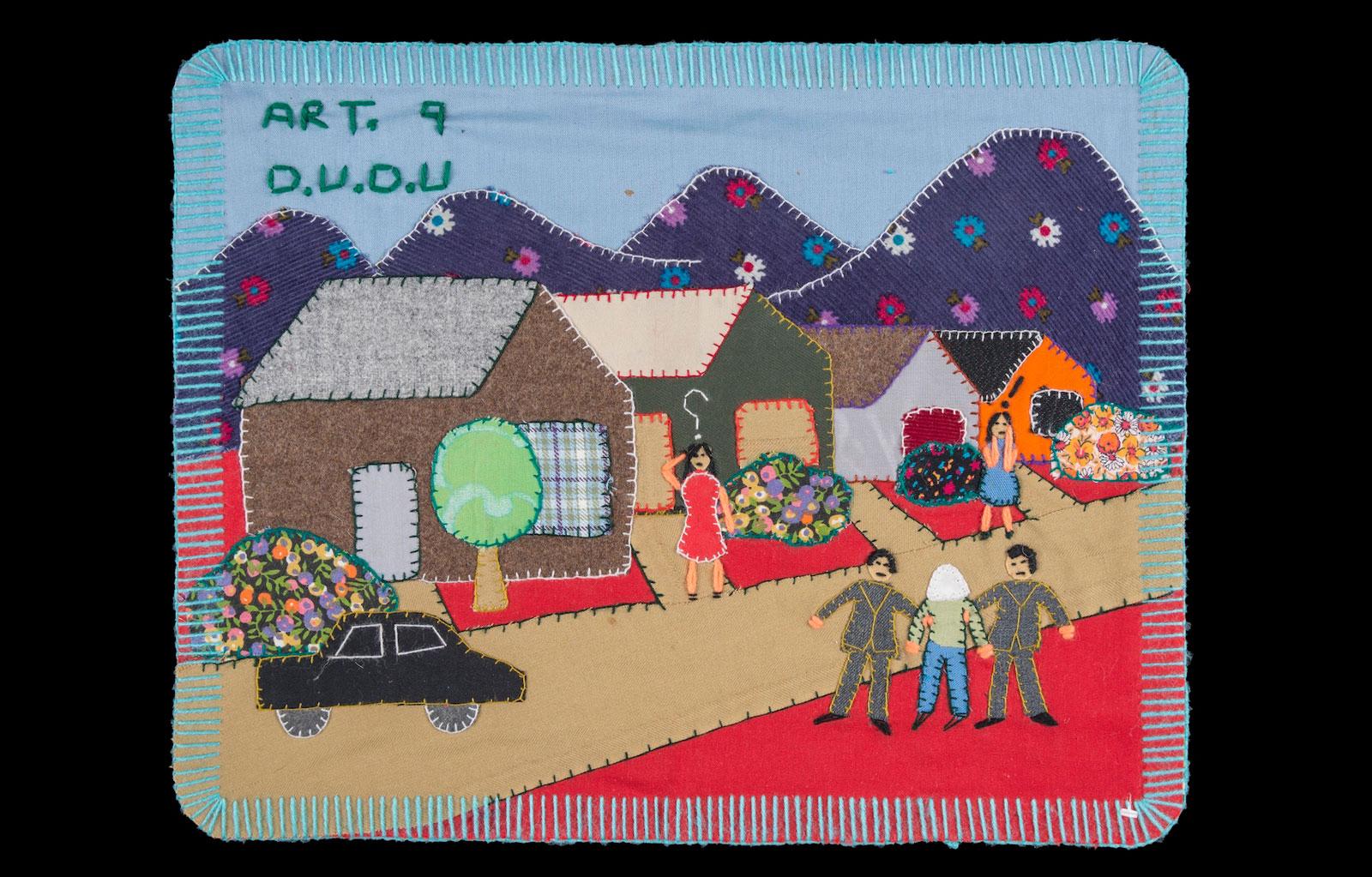 Louise Durston, Article 9. No one shall be imprisoned arbitrarily nor tortured, 1978.

“There were whole sections on these retablos and other figural art, extremely violent scenes depicting what people lived through,” said Villela. “We brought up a number of Peruvian artists for workshops on art-making as a way of healing trauma or at least addressing it.”

The museum’s current programming mirrors suffering associated with the pandemic. A santero woodcarver, Arthur Lopez, taught a workshop on building an altar for protection from COVID-19. Villela said the museum is organizing an exhibition of masks.

“Whatever your background or political leanings, there is something here for you and a way for people to bridge gaps that sometimes seem unbridgeable,” Villela said.

In the 1880s and early 1890s in England, the Arts & Crafts Movement sought to bridge the chasm created by the Industrial Revolution transforming society. As machines replaced laborers, economic depression and civil unrest arose in England—at the time, the world’s most industrialized nation. Led by William Morris (1834-1896), the Utopian Arts & Crafts Movement elevated utilitarian arts such as weaving, calligraphy, printing, stained-glass, ceramics, and more. Looking to nature for inspiration, the movement also was political. While designs often suggested bucolic, Romantic beauty, the art was tinged with Socialism.

In the U.K., on the Cornwall coast, Rhian Kivits is a psychotherapist facilitating holistic healing between mind, body and spirit. Since 2012, she has counseled an international clientele, including artists.

“Folk artists can be more impulsive than fine artists, more concerned with their message than creating a refined piece of work." —Rhian Kivits

“Folk artists can be more impulsive than fine artists, more concerned with their message than creating a refined piece of work. Folk artists could be rule-breakers using whatever materials they have access to and techniques that they develop themselves rather than sticking to classical ways of creating art,” Kivits said. “Their underlying motivations may be different, so their measures of success might be different.”

Kivits pointed to Britain’s Banksy as an example of a folk artist inspired by a subversive message. “Banksy started out as a graffiti artist in the city of Bristol, but became a renowned celebrity. His art has always offered a gritty social commentary,” she said. “Nobody is sure who he is. This is perhaps part of his message. He is expressing the sentiment of the many, but remaining anonymous.”

Kivits also cited St. Brigid’s crosses as examples of folk art with a covert edge. The crosses woven of rushes are a folk art tradition from early Christians of Ireland who superimposed the new Christian interpretation atop an already existing pagan practice.

From a therapist’s point of view, Kivits said that humans create folk art during adversity “to rally together and create community spirit, to find an outlet for self-expression, fun, and play when the external circumstances are challenging. Folk art leaves a legacy for communities and cultures and gives people an outlet for personal expression without having to produce something that would be judged by the experts as perfect. As such, it’s empowering,” Kivits said.

She emphasized that folk art brings to bear many therapeutic benefits for individuals and collectives.

“Folk art allows us to appreciate the art and the message rather than admire the artist because they are famous or their work sells for a lot of money,” said Kivits. “Folk arts connect us with community issues and inspire us to express ourselves artistically.” 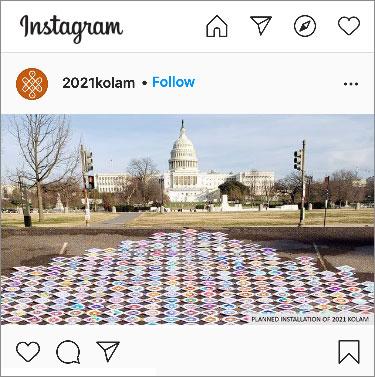 While folk arts differ from crafts, the handmade and home-spun have made a comeback in America. In the U.S., crafting is at an all-time high. A new word was coined: “craftivist” — an amalgamation of “craft” and “activist.” The word aptly sums up the gist of folk art.

Musick said that folk art often has foundations in cultural identity born of bigotry. “Pride in culture,” she said, “sometimes this is a response to having been put down, teased, or punished.” Musick agreed that the value of folk arts lies not only in the objects created, but also in the community created.

She said, “Participating in a project involving folk arts made by many can bring people together in a common cause in a spirit of creativity — as opposed to only outrage or fear — and create cultural or ethnic solidarity.”

As examples, she cited the AIDS quilt, the origami peace doves installed in the National Cathedral and also the COVID-19 masks made by traditional Native American weavers.

“Folk art is continuously made all over the world, and it’s still very active,” Villela said. “It’s not a dead tradition. While some folk arts are endangered others are really, really vibrant.”