Wendy Red Star, Yakima or Yakama - Not For Me To Say.

Courtesy of the Crow's Shadow Institute of the Arts and the artist.
Wendy Red Star, Yakima or Yakama - Not For Me To Say.
Prints from the Umatilla Indian Reservation

Prints from the Umatilla Indian Reservation 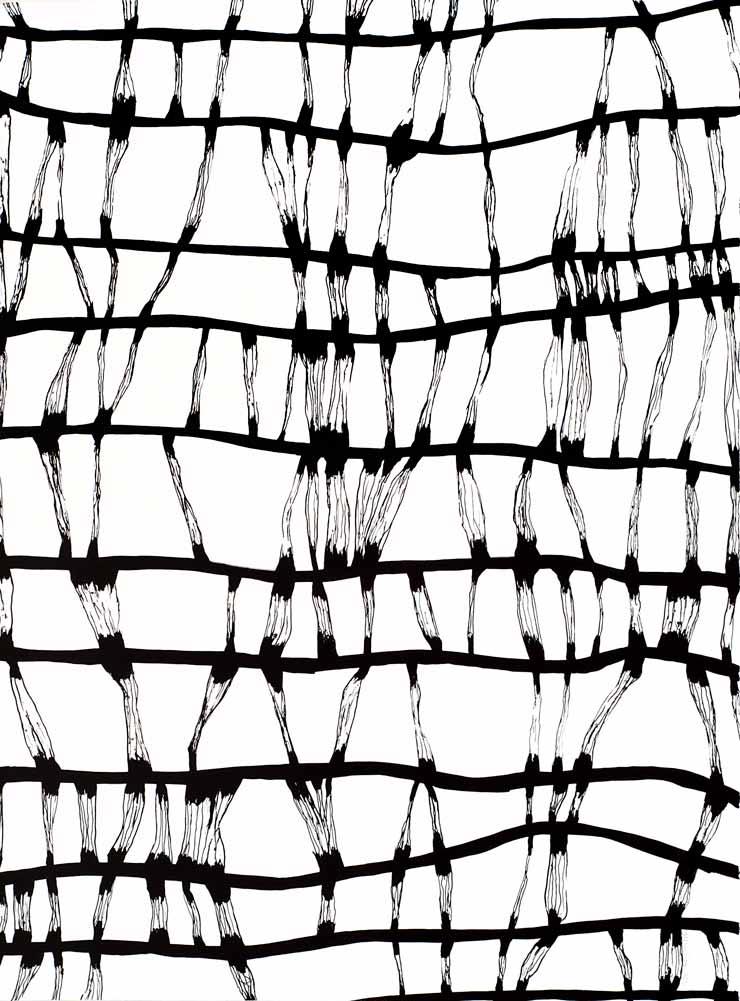 Brenda Mallory, The Plural of Nexus

Mallory’s work is highly tactile, a feature that she was able to incorporate into printmaking while at Crow’s Shadow.

The Crow’s Shadow Institute of the Arts (CSIA) is a nonprofit arts institution on the Umatilla Indian Reservation in far northeastern Oregon. Founded in 1992 by artists James Lavador (Walla Walla) and Phillip Cash Cash (Cayuse and Nez Perse), CSIA hosts some of North America’s most innovative contemporary artists through its prestigious artist residency program. Along with its publishing house, traditional arts workshops, and gallery, CSIA is known today as a center of printmaking excellence. The opportunities the institute provides have enabled already-accomplished artists, many of whom are BIPOC, to explore new media in an intimate, collaborative environment. The resulting work is varied, exciting, and more affordable than many of the artists’ works in other forms.

Working with master printmaker Judith Baumann, resident artists spend their two weeks at CSIA producing an edition of lithographs, monoprints, or monotypes. Many of the artists are not trained printmakers and admit to being apprehensive about the media. Baumann helps them explore what is for many an entirely new, even uncomfortable, way of creating work. Here, artists Brenda Mallory, Jovencio de la Paz, and Wendy Red Star, all of whom have held recent residencies, reflect on their time at Crow’s Shadow and how printmaking has pushed their practice into newly challenging territory.

In 2020, Crow’s Shadow did not stop running its residency program. With some adjustments, it was able to host Jovencio de la Paz and Wendy Red Star, both of whom describe their time at CSIA as prolific and inspiring. But printmaker Baumann looks forward to when the studio can open up more, as CSIA has felt quiet and somber with the safety measures that have been put in place.

For Brenda Mallory, who held a residency at CSIA in 2016, her time exploring print media was both challenging and rewarding. Mallory is a mixed media artist and citizen of the Cherokee Nation, now based in Portland, who works in fibers and found objects, among other materials. Her 2016 residency at Crow’s Shadow was an opportunity for her to learn a new skill—she recalls that she had previously been intimidated by printmaking. Working alongside the former master printmaker Frank Jantzen, she spent two weeks steeped in an unfamiliar, collaborative process. The results were pieces she believes she could not have been achieved alone.

Much of Mallory’s practice investigates the theme of disruption. She remembers the sprawling yellow wheat fields that surround the Umatilla Reservation, where CSIA is housed beside a nineteenth-century mission schoolhouse. She says that, like her native Oklahoma, the communal lands around Crow’s Shadow have been fenced up and turned into grids. She found this grid-like overlay on the natural landforms very interesting; it is an image that has stuck with her since 2016.

Mallory’s work is highly tactile, a feature that she was able to incorporate into printmaking while at Crow’s Shadow. She created plates using materials like cords, string, and deconstructed packing materials, then stamped materials into ink and onto mylar. She developed a process of building up the plates then drawing onto their surfaces. This allowed her to translate an otherwise three-dimensional, sculptural practice into prints. 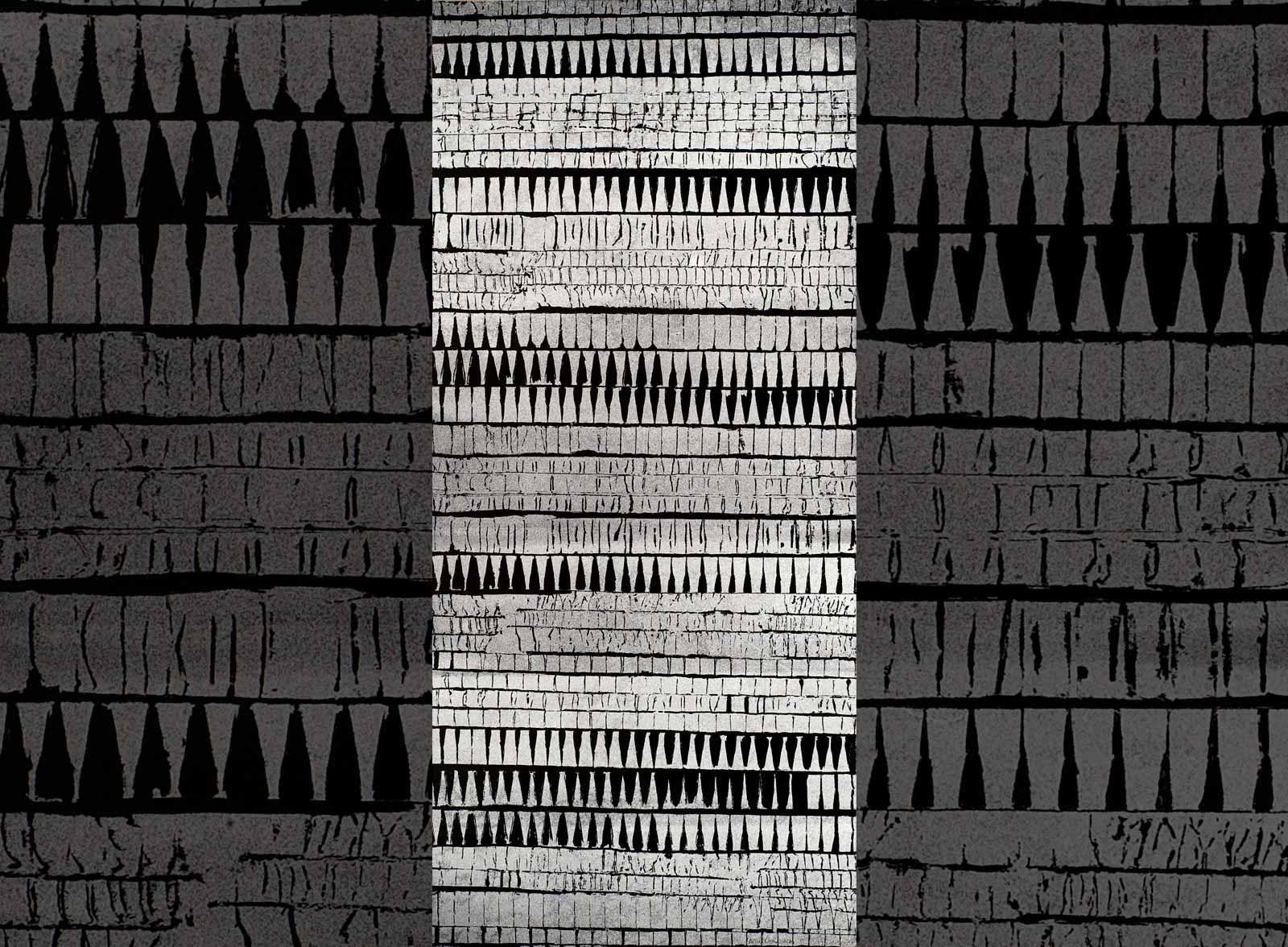 Courtesy of the Crow’s Shadow Institute of the Arts and the artist.” 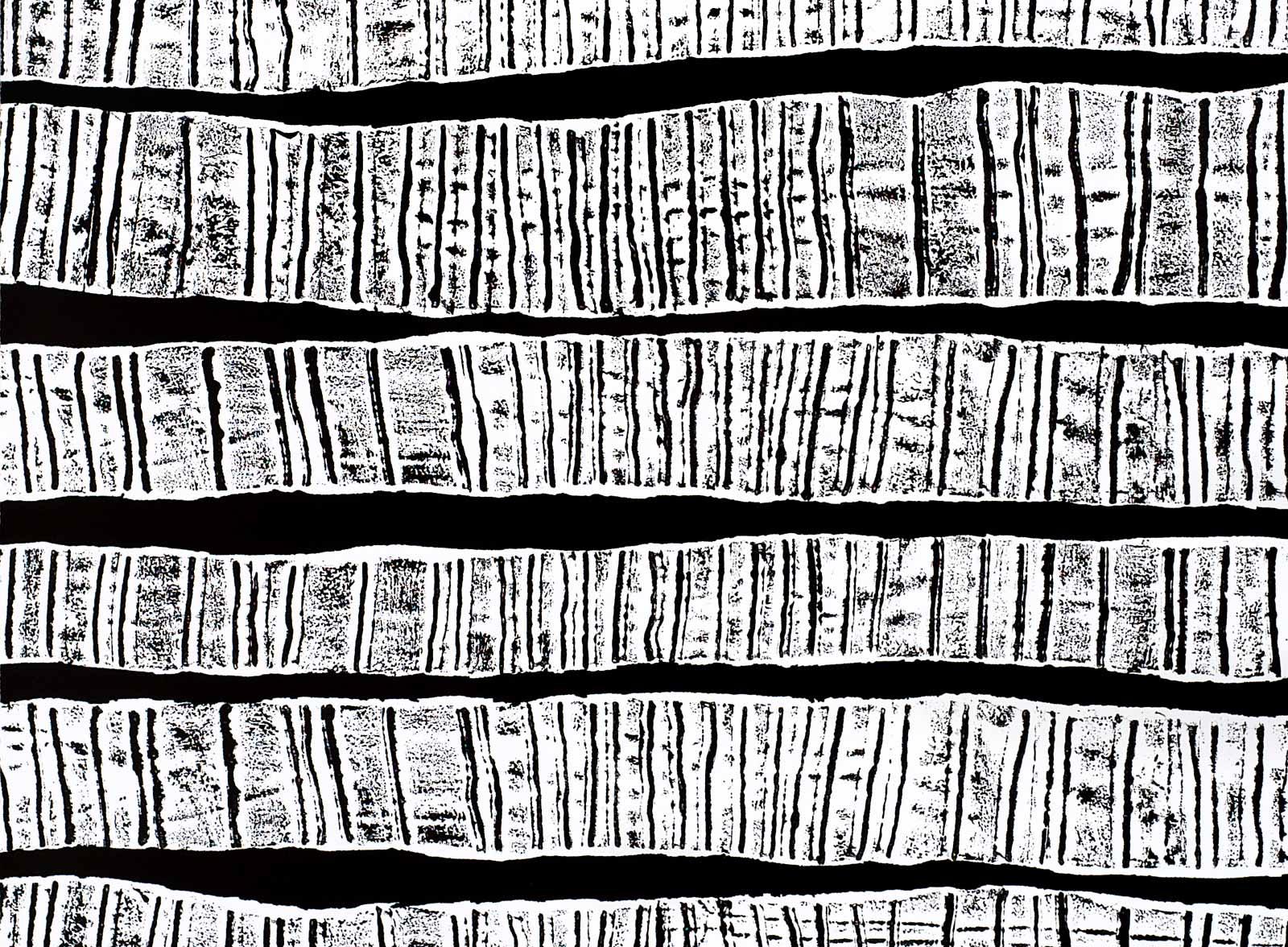 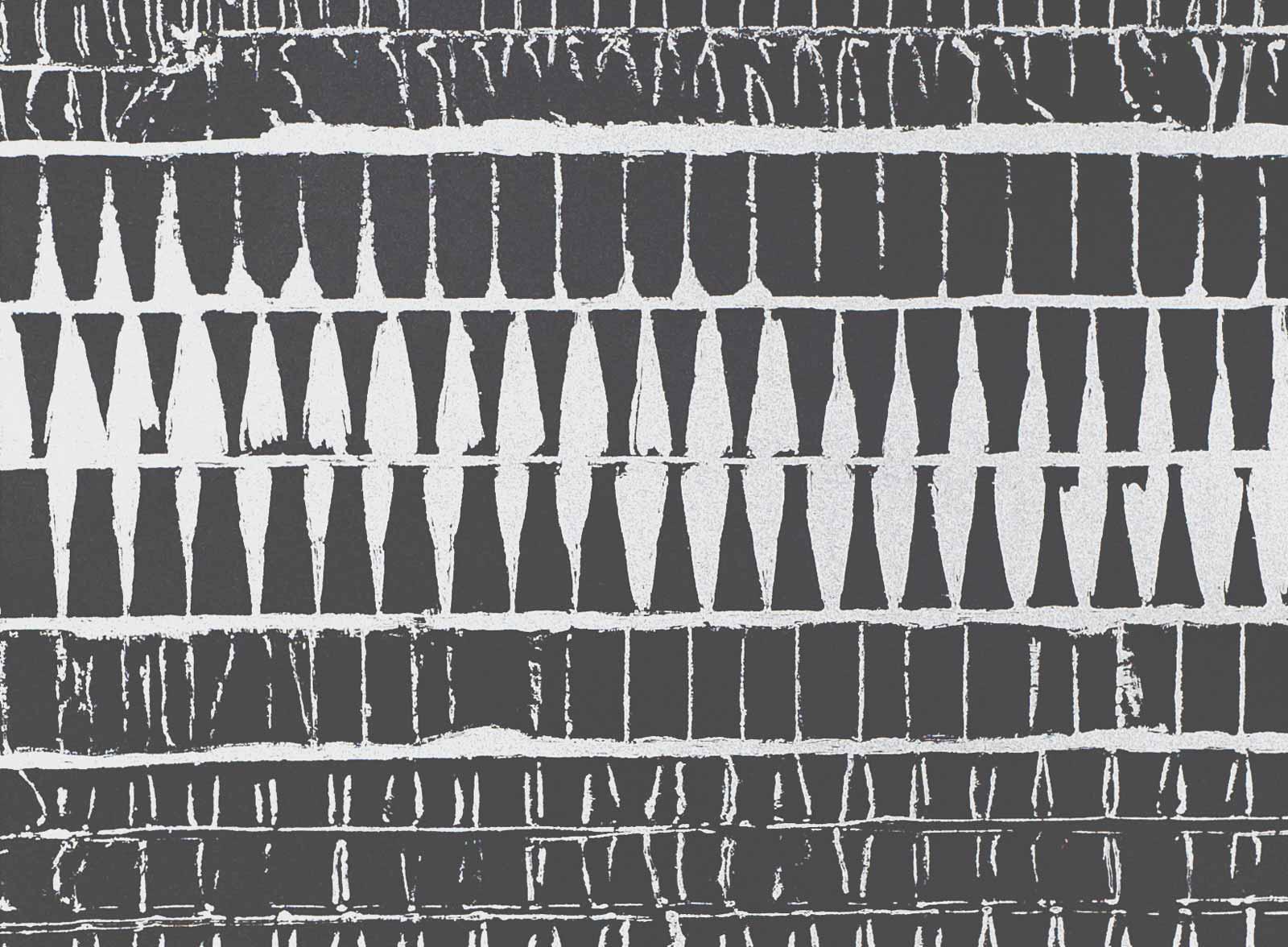 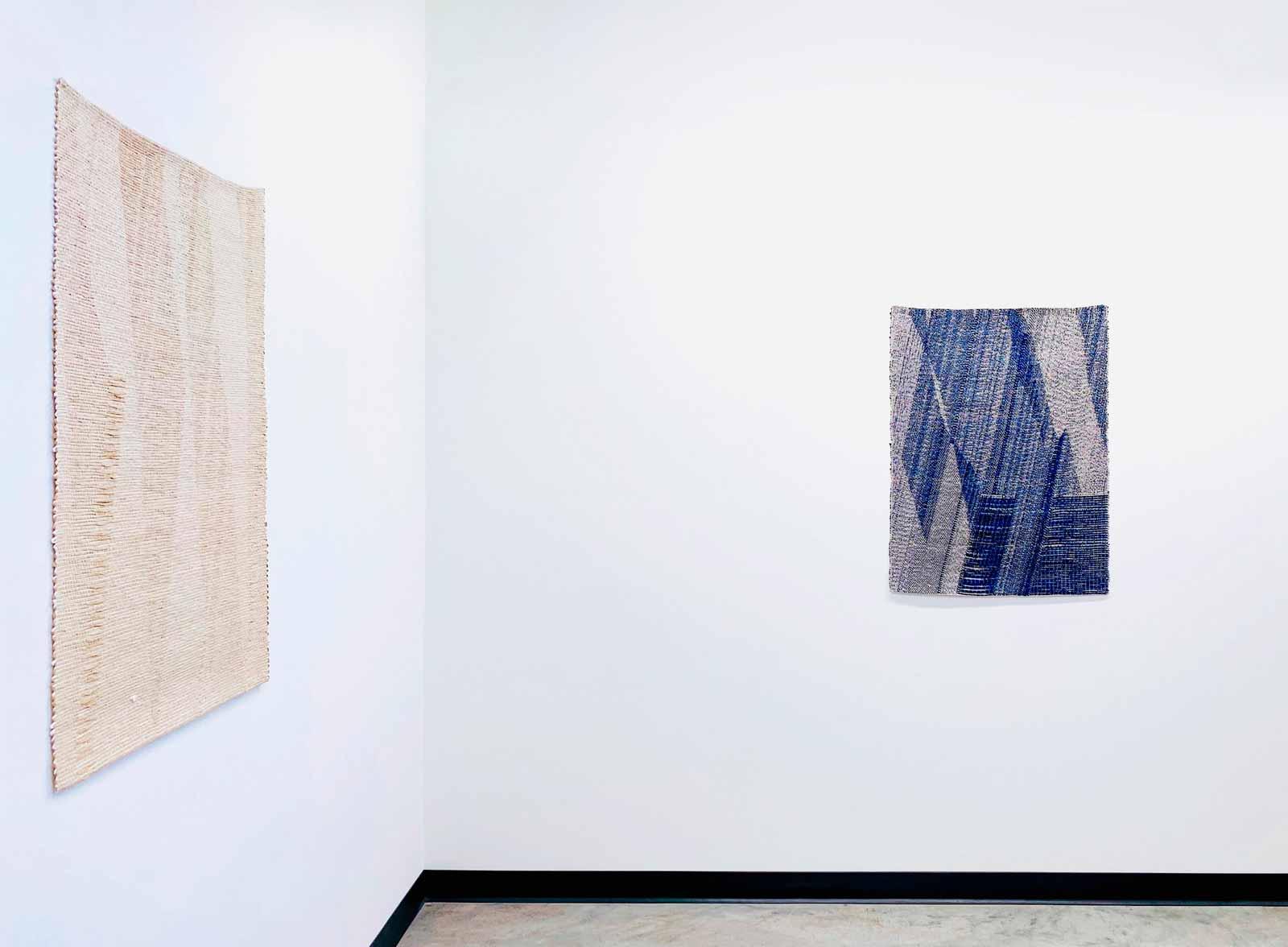 Jovencio de la Paz, The numbers are the body of the fog. 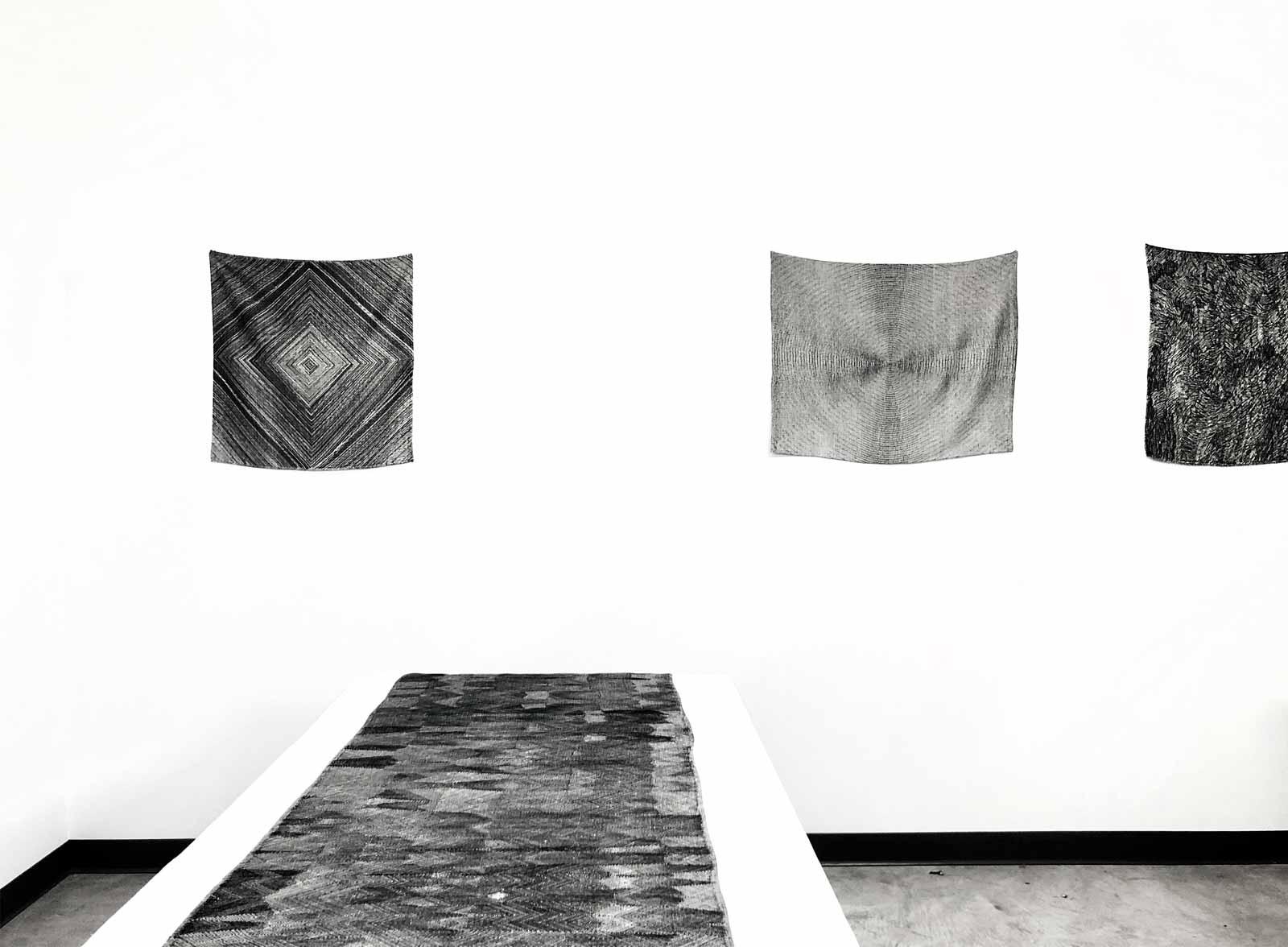 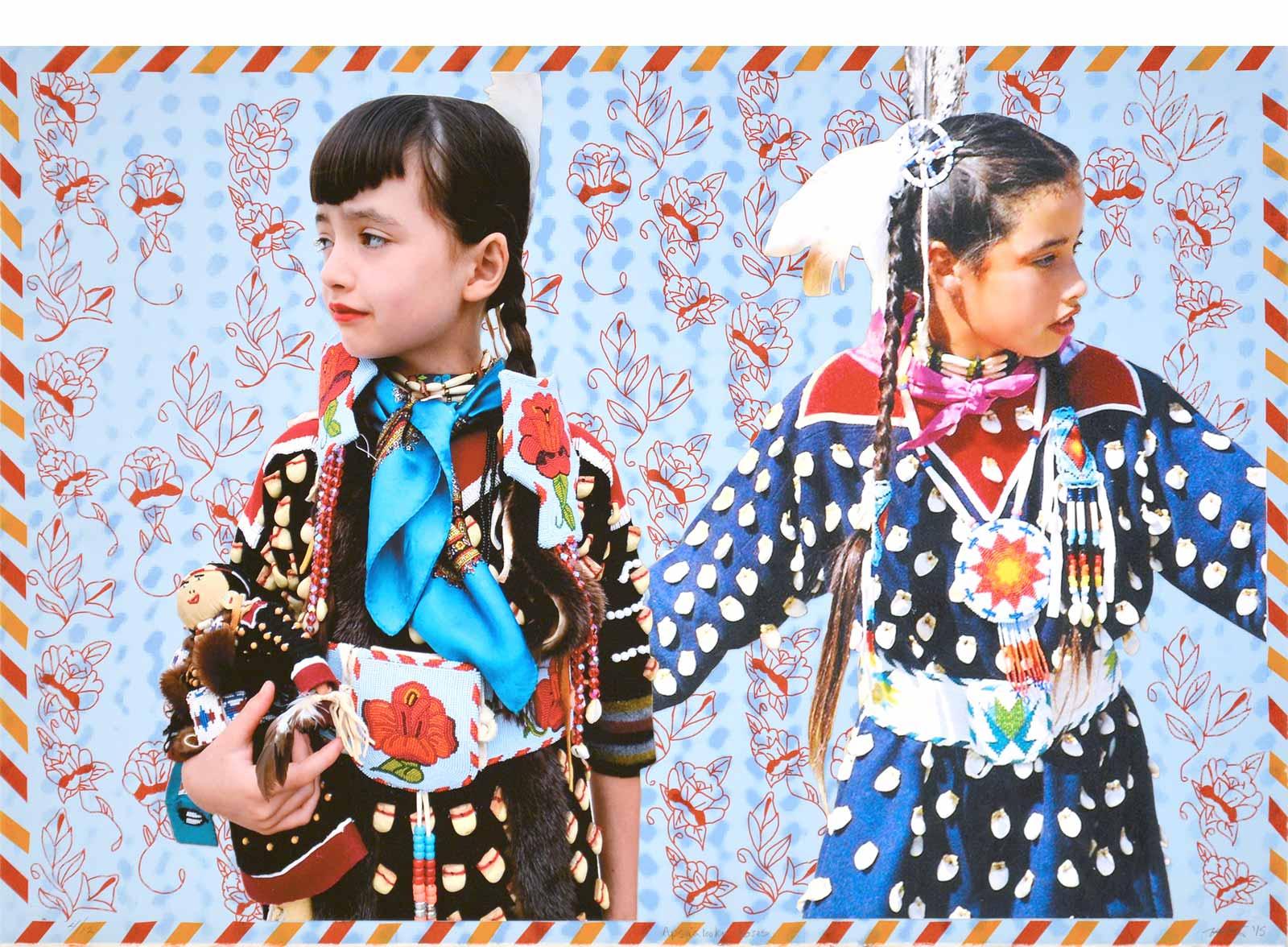 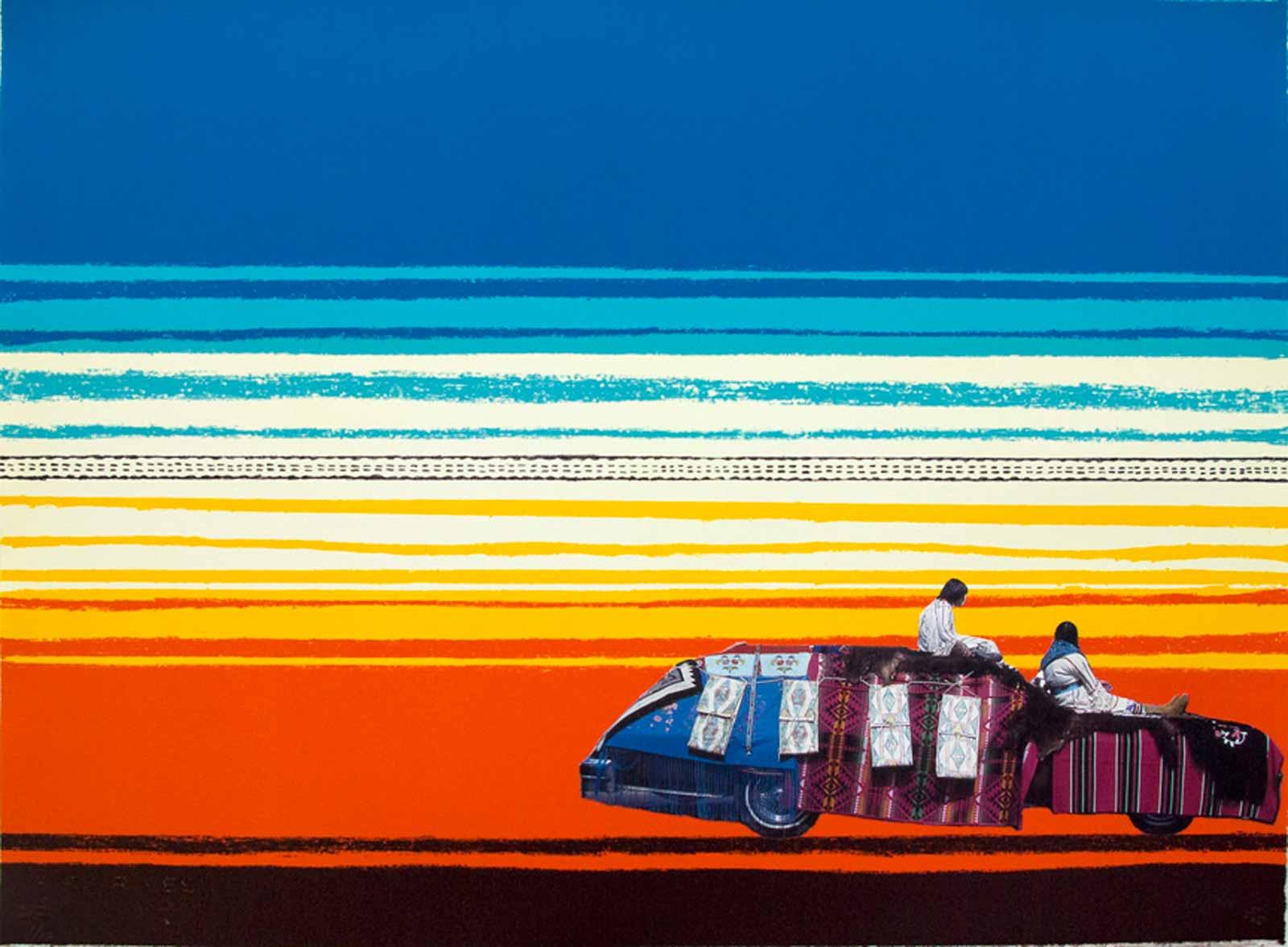 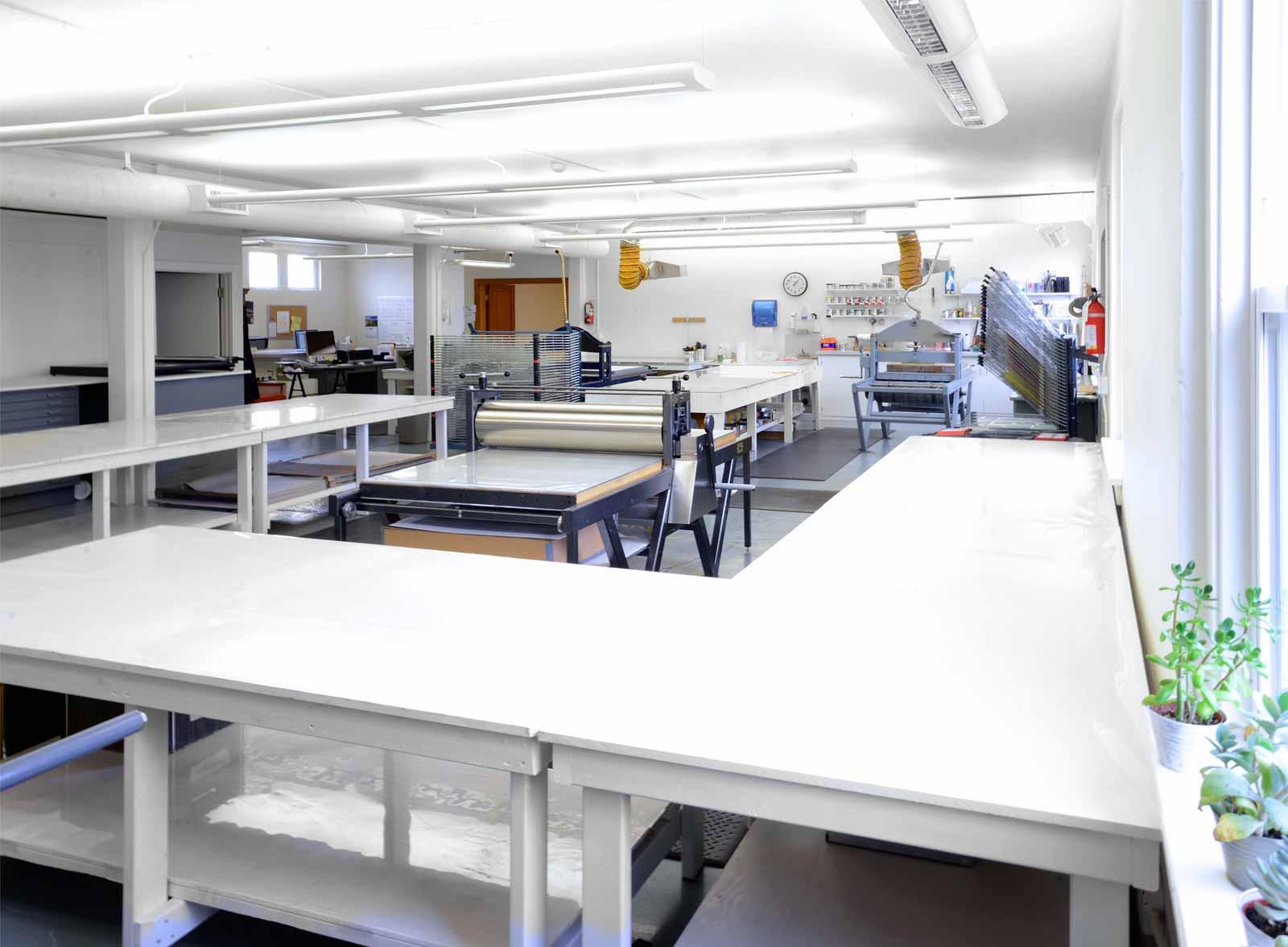 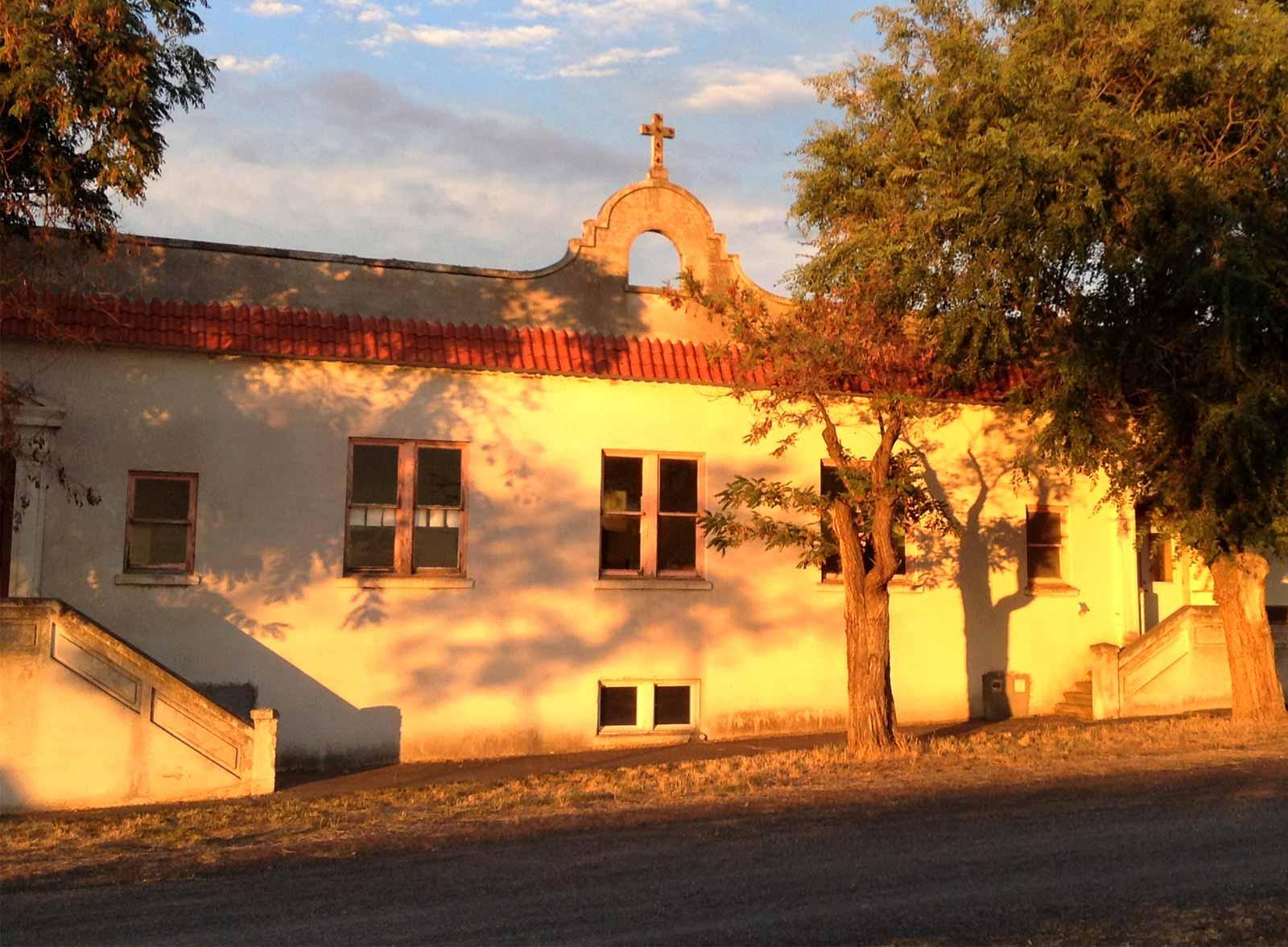 Mallory found the exacting nature of the print process especially difficult but her residency allowed her to work with color and to freely make mistakes. She remembers how amenable master printmaker Jantzen was to experimentation. Baumann, reflecting in 2021, has noticed that many resident artists likewise quickly realize that print does not have to be as rigid a process as they had previously imagined it to be.

For 2020 resident artist Jovencio de la Paz, working at CSIA was also an experience of broadening his practice. The artist emphasizes the importance of translation in his digital weaving work: “from writing code, to software, to data visualization, to instructions to the digital loom, to final weaving.” Working with Baumann, de la Paz was able to streamline the process of transformation between media—he could move from software and digital images to lithographs smoothly with Baumann’s help. His residency at CSIA provided him with the opportunity to engage in a collaborative process, between himself and Baumann, and between weaving, the printing press, and broadened conceptions of technology.

De la Paz’s work explores the fraught relationship between digital technology and the human body. The artist is also a Zen monk, and thinks deeply about the dangerous and weaponizing potential that over-connectivity can have on a society, as was made so evident this past year. He makes astute connections between weaving and computer technology, observing that we might think of the loom as the first computer. But his ideas and work invite viewers to see the universalizing, connective potential of technology. He offers that early looms and the first computers had much in common, and that “these are technologies that rhyme across history […] they are not separate, that is, the story of the body and the story of the digital.” De la Paz says that he has been trying to understand these links through weaving, and also through his life this past year.

Red Star was surprised to find that printmaking allowed her to explore the tactile, layered qualities of two-dimensional media while still staying true to her broader project.

Wendy Red Star has held multiple residencies at CSIA. She describes a gradual process of warming up to the space and rhythm of working there, after having been intimidated by print and two-dimensional media in general. But she soon came to feel settled at CSIA. Red Star grew up on the Crow Indian Reservation in Montana and now finds that Crow’s Shadow reminds her of home. Having come from a sculpture background, Red Star was surprised to find that printmaking allowed her to explore the tactile, layered qualities of two-dimensional media while still staying true to her broader project. Like Mallory and de la Paz, the collaborative nature of working with a master printmaker is invigorating for Red Star. Baumann provides the artists with structure. Red Star had to rely on Baumann to mix colors and to undertake the technical print processes so that the two of them could bring Red Star’s ideas to life. Relinquishing some degree of control over her practice provided what Red Star calls a productive “buffer.” Baumann, in turn, describes the collaborative process as one of give and take.

Storytelling is an integral part of Red Star’s practice, and her time at Crow’s Shadow gave her the opportunity to mine her personal photographic archive. Within the limitations imposed by the print, Red Star says that she was still able to “utilize photos and tell stories within that structure.” Red Star’s work is often humorous while tackling heavy, hugely important topics such as systemic racism and institutional trauma. Though she doesn’t necessarily set out to be funny in her work, she finds that levity can be a crucial tactic in addressing painful subjects. She says that humor is a necessary defense mechanism for many people in her community who have experienced trauma and tragedy. Humor relieves tension and is a universal language; it allows for discussions about racial tension on a more equal footing.

All three artists look forward to 2021 with varying degrees of hope and trepidation. Yet the prints each artist has produced at Crow’s Shadow are more accessible than their other works. This brings their work closer to new markets and audiences and increases the possibilities for important and timely dialogues about topics that remain relevant for all three.