World on a String 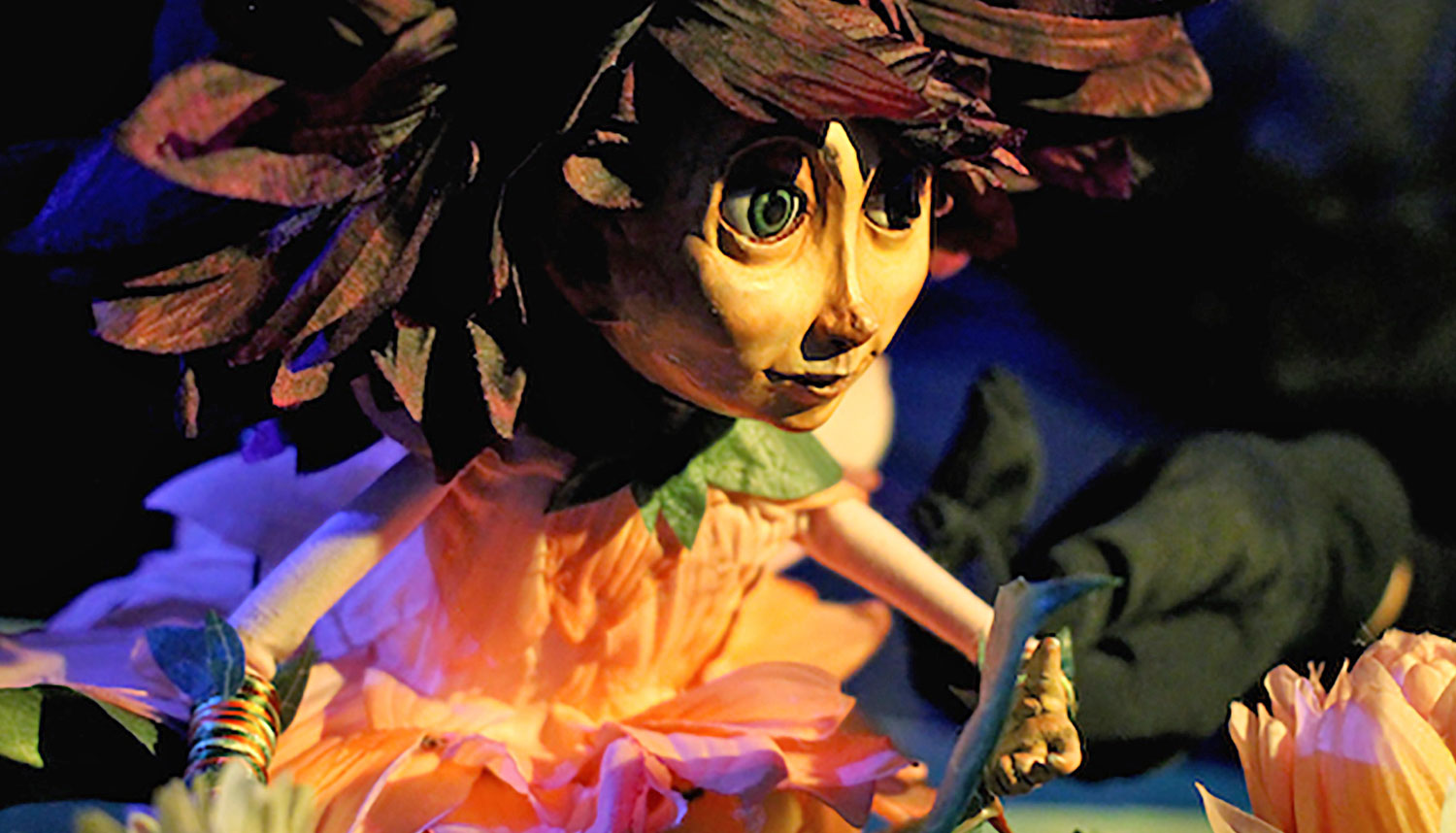 Courtesy Sarah Frechette. Photo by Jessie Forand.
Sarah Frechette, Rose from "What the Moon Saw," 2014. Mixed media, 16 x 8 x 9 in.
Familiar and unexpected characters from around the world demonstrate the artistry and universality of puppetry.

Familiar and unexpected characters from around the world demonstrate the artistry and universality of puppetry. 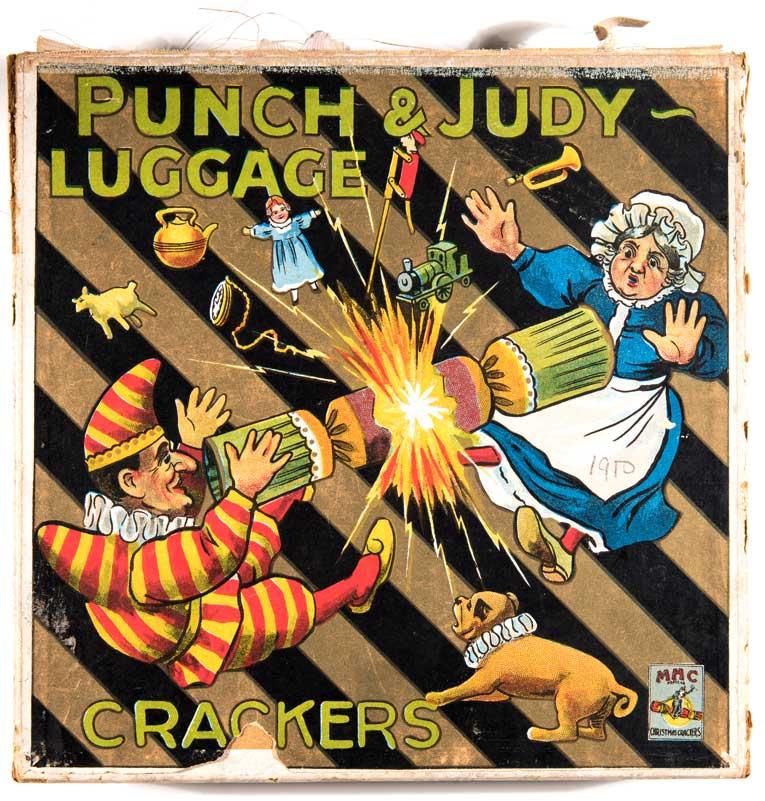 Deep purple stage curtains drawn back in swags at either side of the entrance to the Shelburne Museum’s 2018 exhibition Puppets: World on a String, inviting the viewer to enter a world behind the scenes where everyday life is transformed into something magical. Curator Carolyn Bauer managed to distill the 3,000+ year history of the genre-busting art form of puppetry into a masterful showcase organized thematically in three sections: Otherworldly: Fairytales and Fantasy; Dancing Shadows, Moving Silhouettes; and Behind the Curtain: Everyday Life.

While known for its extensive collection of objects, including a vast, century-spanning doll collection, the Shelburne Museum has a surprisingly small group of twenty puppets, necessitating loans from outside institutions and individual artists for this exhibition. Centered in a tall, glass case serving as the stage between the entryway curtains, Queen of the Night on a Cloud (1986) and Prince Tomino (1986), two spectacular examples of marionettes by Frank Ballard (1929-2010) from a performance of Mozart’s fantastical opera The Magic Flute (1791) were on loan from the Ballard Institute and Museum of Puppetry at the University of Connecticut. These ornately costumed, richly detailed, wood, neoprene and fabric figures illustrate their power to inspire our desire to covet them as beautiful objects, and to lead us into imaginary realms of heroic deeds and deceptive villains. The mechanism of strings used to bring these characters to life was also artfully displayed to reveal the technology and the reality behind the magic. Frank Ballard established the first degree-granting curriculum in puppet arts at the University of Connecticut, still one of the field’s most respected programs.

No exhibition of puppetry can be complete without Punch and Judy, an internationally recognized iconic, centuries-old, darkly comedic duo first adapted from the 17th-century Italian puppet show Pulcinella. The two wood, cotton, and paint glove puppets shown here date from the late 18th century. Along with Punch & Judy Luggage Crackers, a 1910 chromolithograph and Punch, a large 19th-century wood and paint cigar-store figure, these objects demonstrate the influence of Punch and Judy characters in the early days of advertising. They required considerable restoration work and were the only items drawn from the museum's own collection 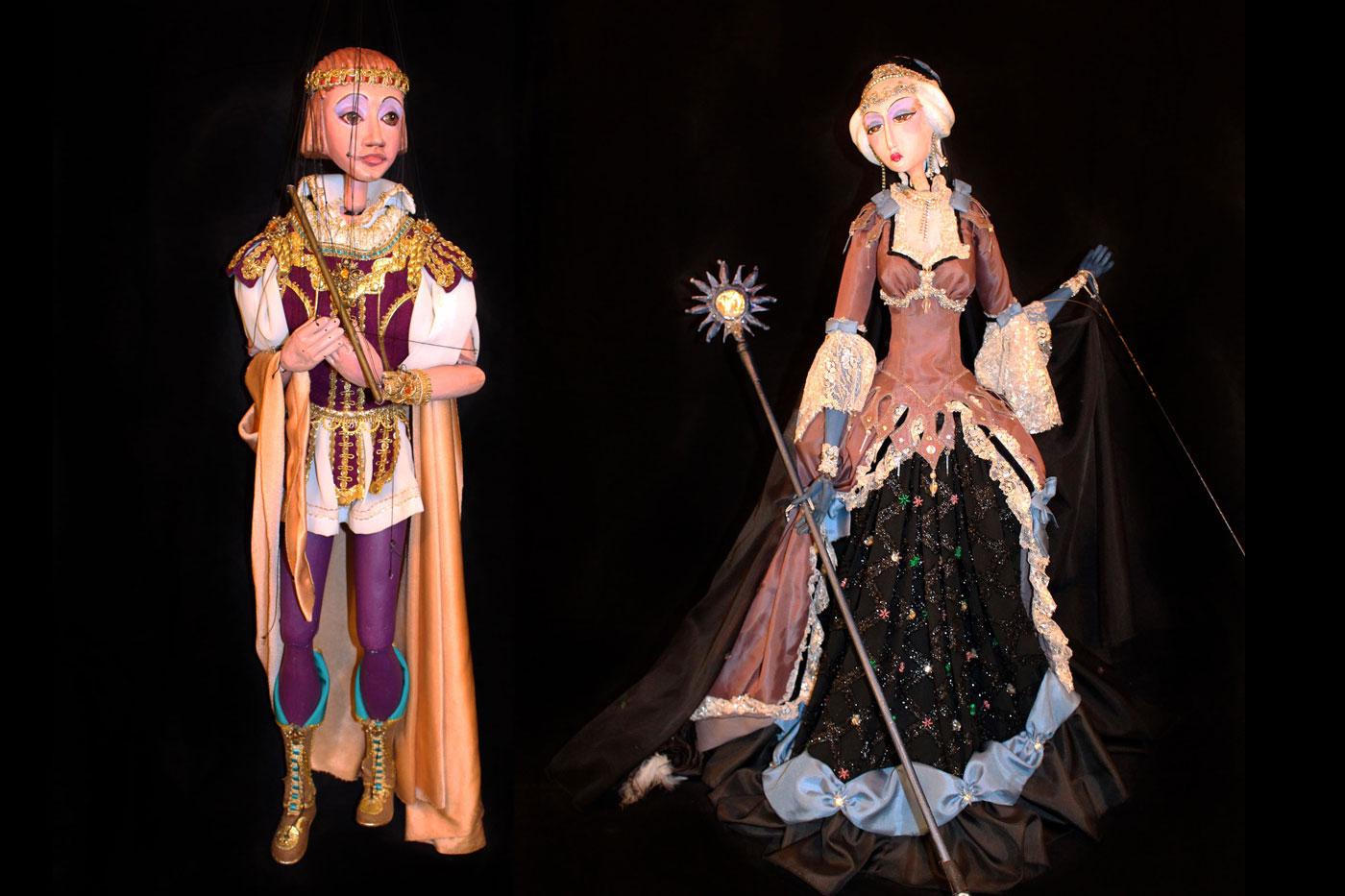 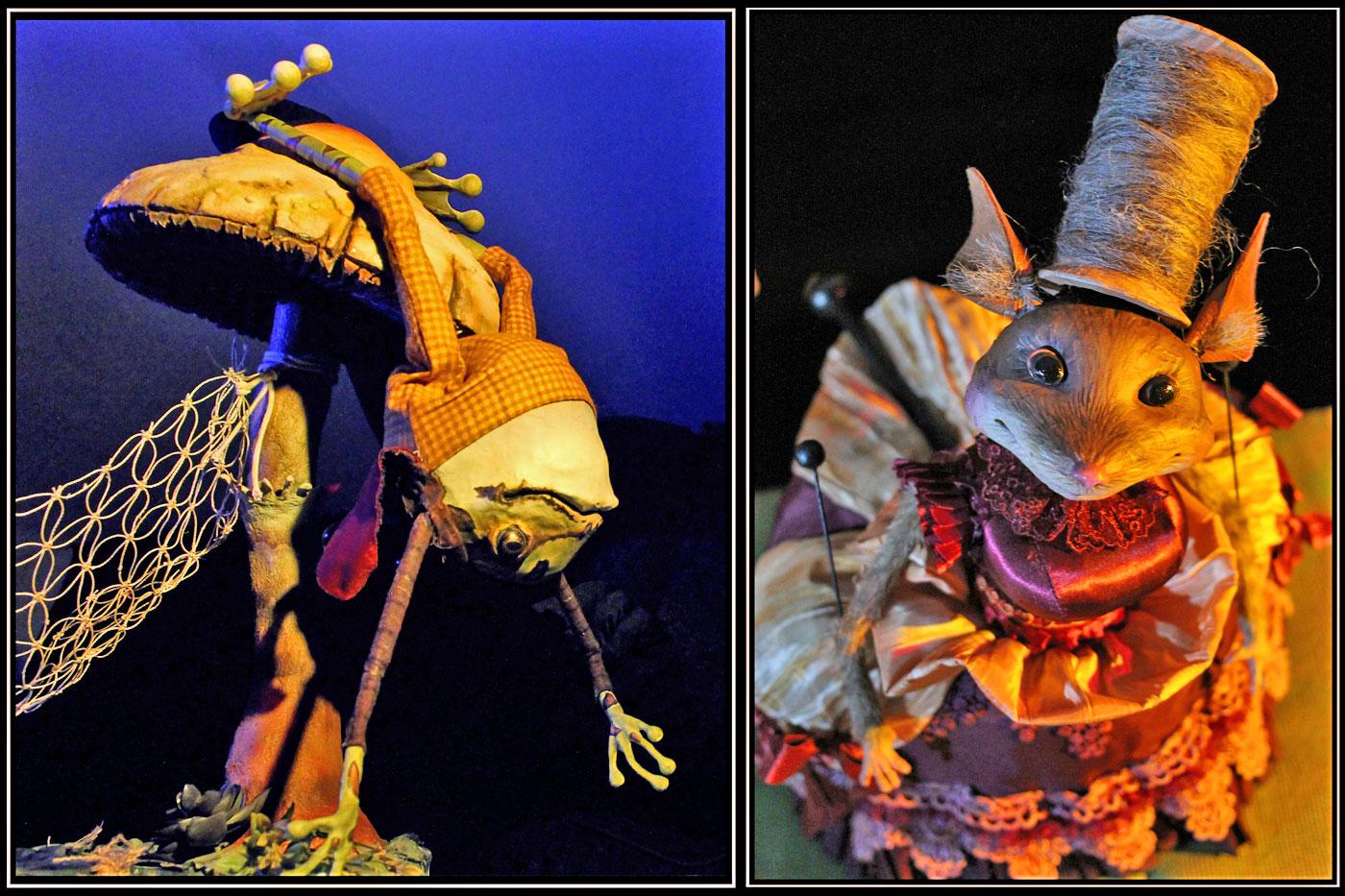 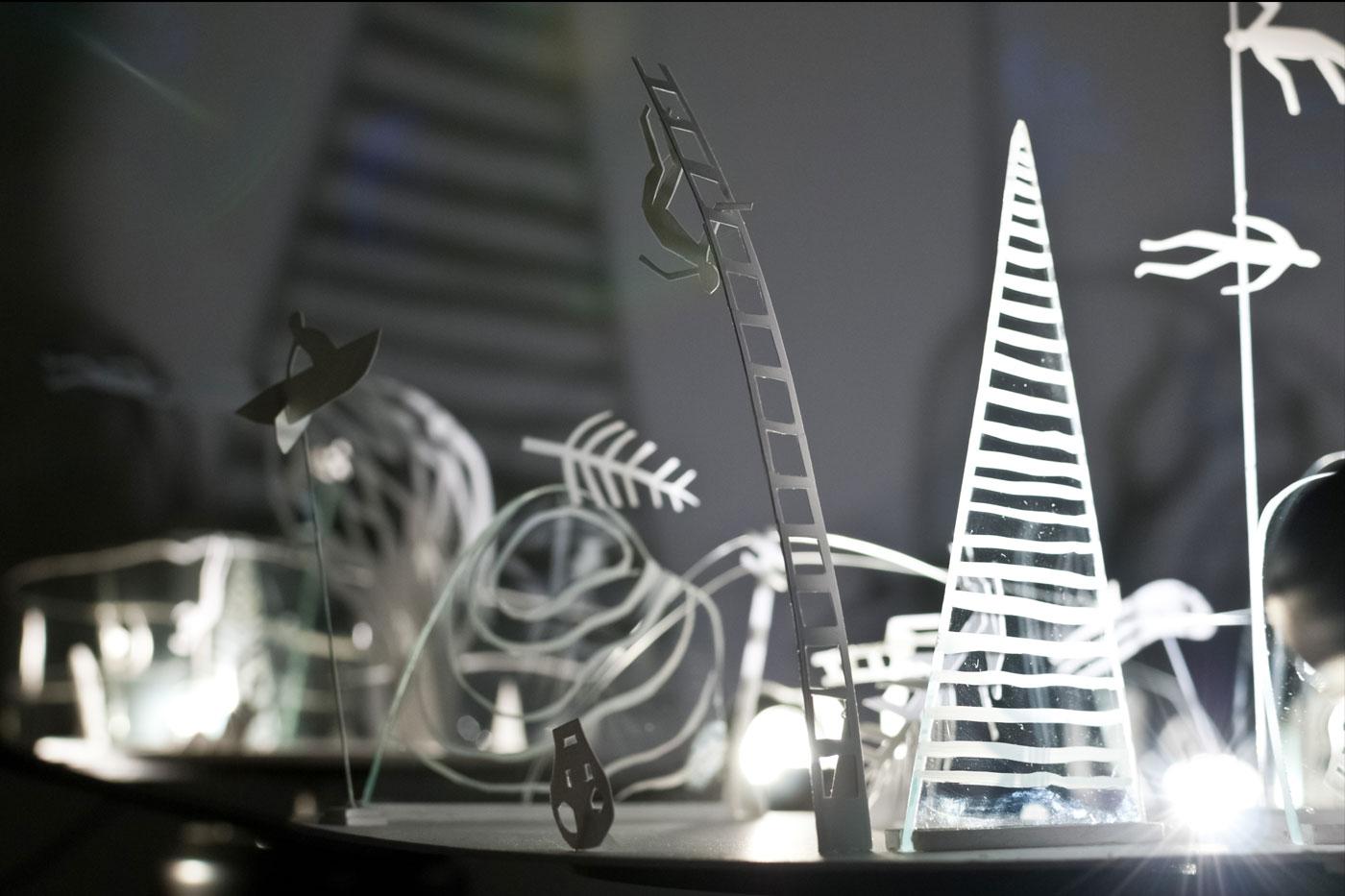 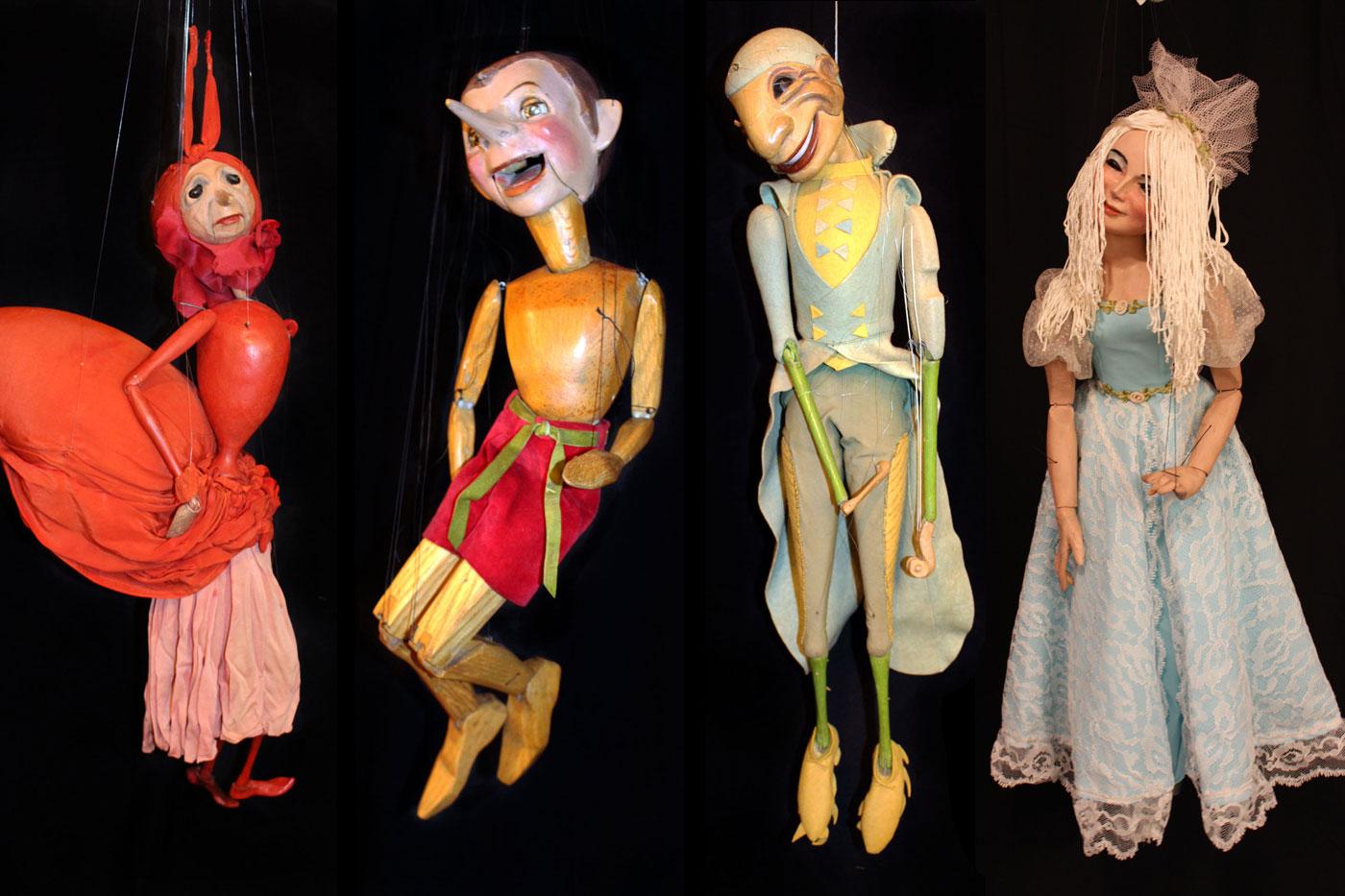 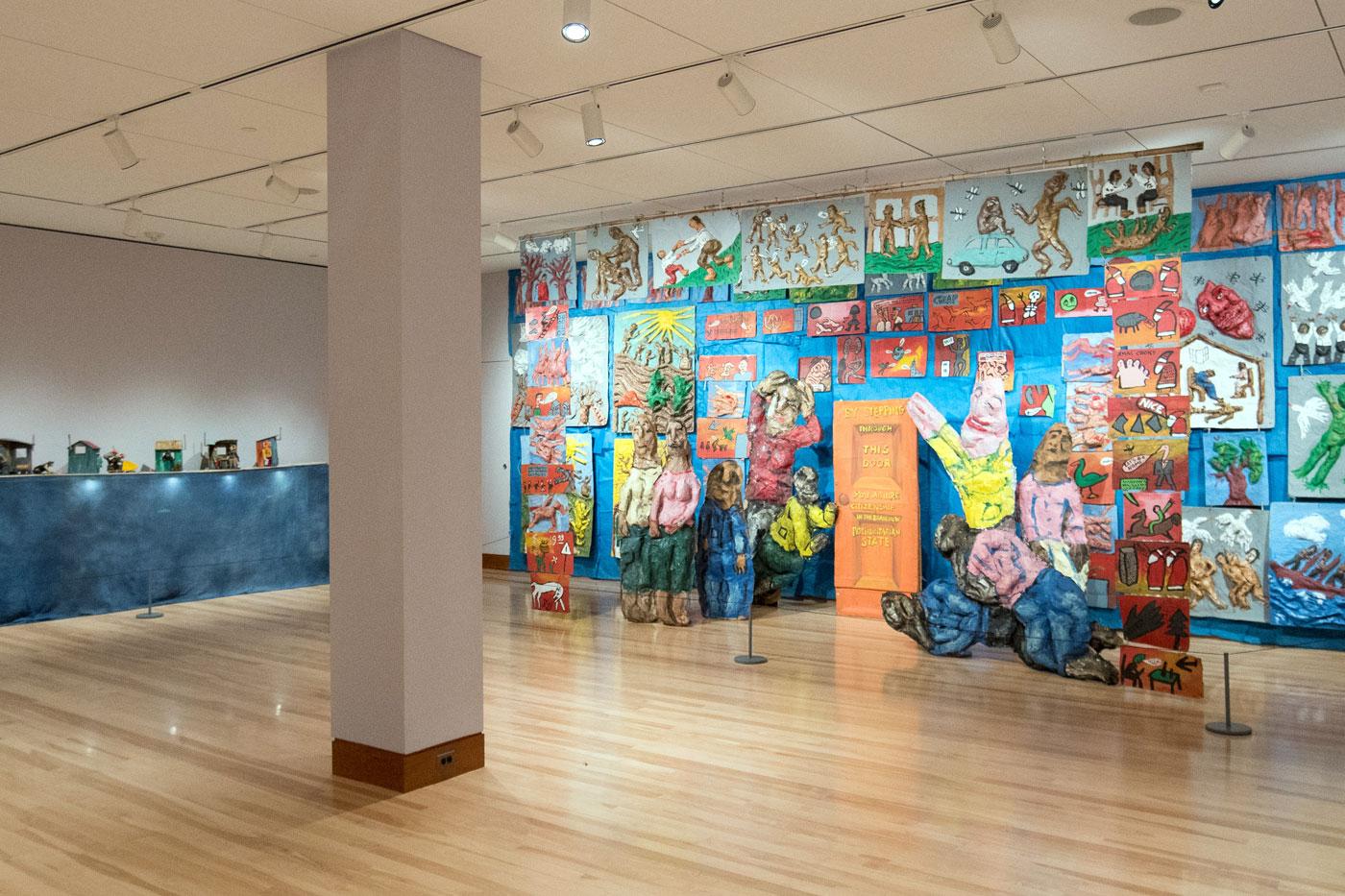 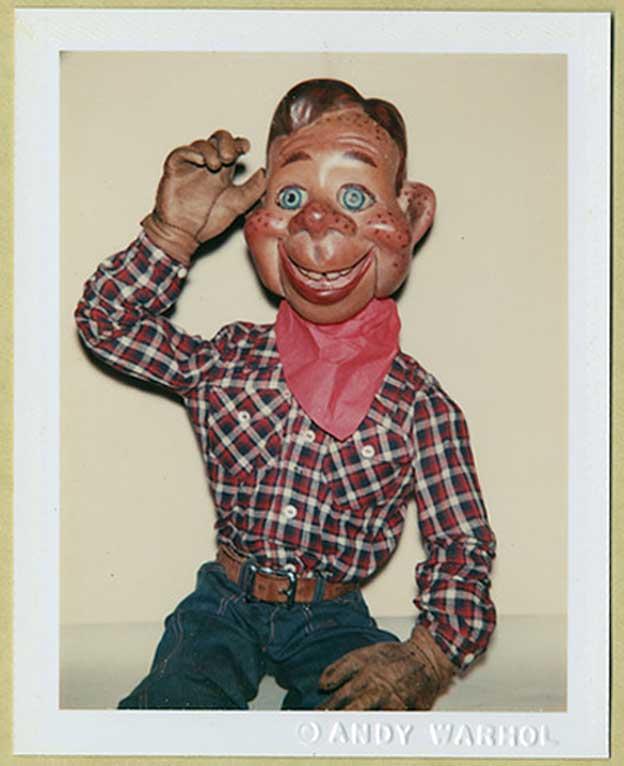 Television and even radio have proven to be fertile ground for puppetry. Margaret “Margo” and Rufus Rose (1903-97, 1904-75) were digital and broadcast media pioneers. In 1949, their marionette performance Scrooge! was the first puppet show broadcast live on national TV. Margo designed and sculpted the detailed, emotive marionettes while Rufus engineered the construction to animate their movements. The couple served on the original team of creators and performers of Howdy Doody, the popular cowboy marionette who starred in the well-loved 1950’s children’s television program The Howdy Doody Show.

Howdy Doody appears in two 1980 Polaroids by Andy Warhol included in the Everyday Life section of the exhibit. This character fits right in with Warhol’s oeuvre of pop culture images including celebrities who impacted society. The puppet's appeal, just as in the case of centuries old Punch and Judy, became a powerful marketing tool.

By 1969 with the advent of Jim Henson’s Sesame Street and later The Muppet Show (1976-81), television had injected puppetry into the hearts and minds of children across America. Muppet characters like Kermit the Frog became stars in their own right as our childhood abilities to anthropomorphize carried into adulthood. Henson along with his wife, puppeteer Jane Nebel, created Sam and Friends (1955-61), their first live television broadcast in 1955 predating Sesame Street. Curator Bauer included Roosevelt Franklin (1970) a soft fabric Muppet, “specifically designed to represent a passionate blues and scat singing African American, the first to appear on the program. Under criticism that “stereotypical behavior defined Roosevelt Franklin,” he was retired from the program in 1975.

Scale is used to great effect in The Possibilitarian Door, an installation occupying an entire wall by internationally acclaimed Bread & Puppet Theater founders Peter Schumann and his wife Elka. Their unapologetically politically loaded content performed by looming, stories-high, cardboard, paper-mâché, and house-paint puppets in flattened, rough-edged shapes of striking colors made by an ever-changing community of volunteers are always accompanied by Schumann’s homemade bread with aioli, served free to all.

New-media artist Tony Oursler confronts us with the creepily animated Plaid Doll (1992), one of his signature three-dimensional objects whose projected face stretches, groans, writhes and screams via synced audio recordings. Oursler makes no attempt to hide the technology behind his work, but seeing how it is made in no way diminishes our visceral reactions.

Laura Heit, at forty-four one of the youngest artists in the show, like Oursler, invites the viewer to examine how the mesmerizing, tumbling, floating, surrealist world of her stunning, immersive installation Two Ways Down (2014) is achieved. Although we see the cut glass panels, electric display motors, delicate white cut paper shapes, wire, and projector creating the world around us, we believe it exists.

It only takes a small leap of understanding to see that current developments in virtual reality and applications of artificial intelligence are all part of the long human history of imbuing inanimate objects with storytelling powers.