Explaining the Seven Wonders of the Ancient World

The Seven Wonders of the World are legendary, ancient sculptural and architectural splendors as well as historic testaments to human ingenuity and accomplishment. According to some, the first century BCE Greek historian Diodorus Siculus wrote the first known list of wonders, starting the trend of creating lists of must-see places for Hellenistic tourists traveling through Greece, Egypt, Persia, and Babylonia.

Such lists generally contained The Colossus of Rhodes, the Lighthouse of Alexandria, the Mausoleum at Halicarnassus, the Temple of Artemis, the Statue of Zeus, the Hanging Gardens of Babylon, and the Great Pyramid of Giza. 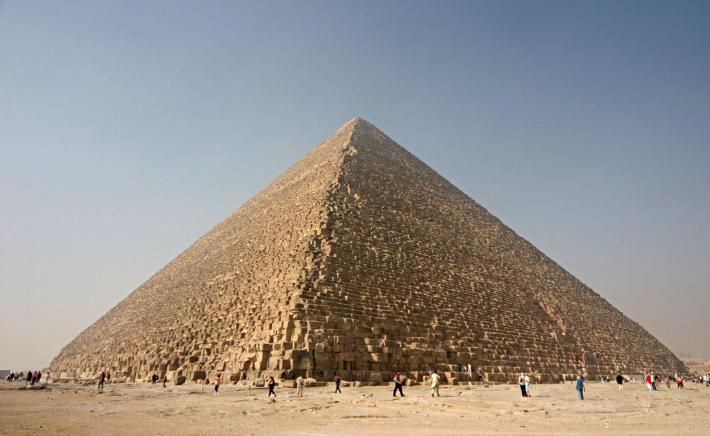 The Great Pyramid of Giza (Khufu Pyramid) in 2005.

The only of the early Wonders that remains extant is the Great Pyramid—the oldest and largest of the Giza pyramids. Pharaoh Khufu’s tomb was constructed around 2550 BCE, over a period of twenty-seven years. An estimated 2.3 million stone blocks were used, weighing between 2.5 and 15 tons. At a towering 481 feet, it was the tallest man-made structure in the world for over 3,800 years. Originally encased in smooth white limestone, today’s tourists see its core structure.

The Lighthouse of Alexandria

Built in the third century BCE to safeguard naval traffic, the Lighthouse of Alexandria, or The Pharos, stood over 300 feet tall, and was the first building ever designed as a lighthouse. Second only to the Great Pyramid in height, it was so well-engineered, it stood for almost 1,500 years. Eventually destroyed by a series of earthquakes, the rubble was scavenged for a medieval fort around 1480. In 1994, a team of French archaeologists discovered pieces of the Lighthouse in the western harbor. 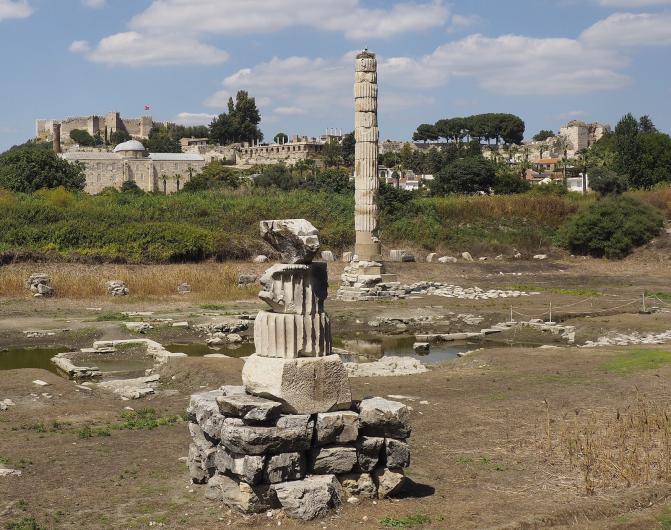 The Temple of Artemis

A 1909 drawing of the Lighthouse of Alexandria by archaeologist Hermann Thiersch.

A rich epicenter of trade, Ephesus was home to the Temple of Artemis, or the Artemision. First built in 356 BCE, the temple had 127 columns, each 60 feet high. One of the largest temples ever created, it was the first built entirely of marble. Damaged by flood and arson over the course of three hundred years, it was completely rebuilt twice. It was eventually destroyed by invading Goths, an East Germanic tribe, in 262 BCE. Today, a single lonely column remains, re-assembled in 1972 from archeological excavations. 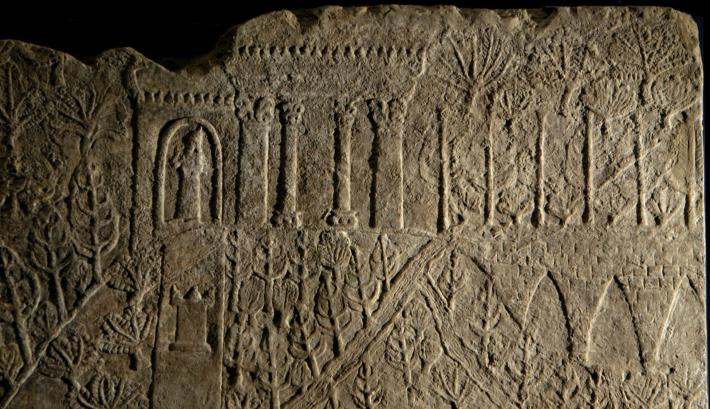 The Hanging Gardens of Babylon

Wall relief of the gardens built by the Assyrian King Sennacherib in the ancient city of Nineveh.

The only Wonder whose provenance is questioned, the Hanging Gardens, were referenced by many Greek writers but solid archeological evidence of its existence is lacking. According to legend, Babylonian King Nebuchadnezzar II built the structure around 600 BCE for his Queen. A marvel of agricultural engineering, the multi-level stone terraced gardens were supposedly 75 feet tall, and would have taken 8,200 gallons of water a day to irrigate. Some historians have posited that the storied Gardens were actually the better-documented structure built by the Assyrian King Sennacherib for his palace in Nineveh. 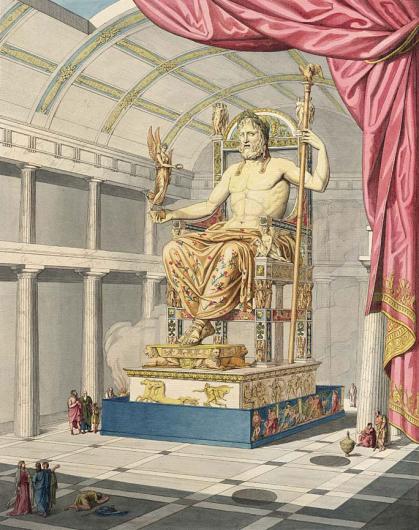 The Statue of Zeus

Created in 456 BCE by Phidias of Athens—the greatest sculptor of his time—the Statue of Zeus was installed at Olympia, home to the Olympic Games. Pieced together from panels of carved ivory, beaten gold plates, and costly cedarwood inlaid with precious stones, Zeus’ seated figure was over 40 feet tall. In the fourth century BCE, the statue was moved to what is now known as the city of Istanbul. A popular pilgrimage destination for 800 years, it was eventually destroyed in a fire.

6 of 7
Wikimedia Commons. Photo by Jastrow. 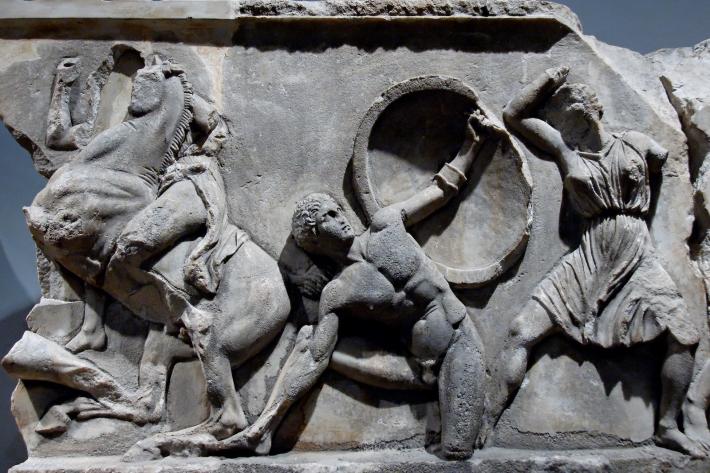 The Mausoleum at Halicarnassus

A relief carving from the frieze that once ran around the top podium of the Mausoleum at Halicarnassos.

Built in the fourth century BCE, the Halicarnassus Mausoleum combined Egyptian, Persian, and Greek architectural styles. The Mausoleum’s pyramid-shaped roof covered a Grecian colonnade with 36 pillars, supported by a rectangular podium above a subterranean crypt, which housed King Mausolus and Queen Artemisia. Lavishly embellished with marble friezes and sculpture, each of the four sides was designed by a different sculptor. While the crypt remained undisturbed for 1,800 years, the upper structure was destroyed by an earthquake. Eventually, fifteenth century looters used structural remnants in a nearby castle-fortress. 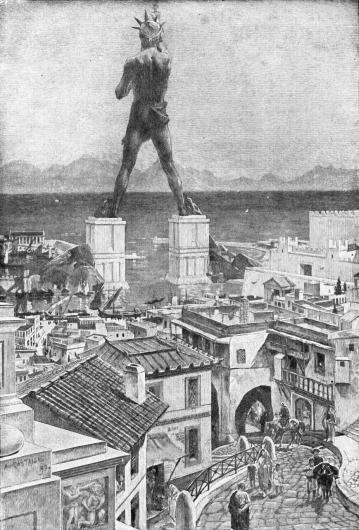 The Colossus of Rhodes

The Colossus of Rhodes as imagined by an artist for the 1911 Grolier Society publication of The Book of Knowledge.

The last Wonder to be finished and the first to be destroyed, the Colossus of Rhodes, stood for fifty-six years at the important island trading port of Rhodes. At 108 feet, this enormous bronze depiction of the Greek sun-god Helios was the tallest statue in the ancient world. Erected by Chares of Lindos in 280 BCE to celebrate the defeat of invading forces after a year-long siege, the statue toppled during an earthquake and was eventually melted for scrap.