“You need to speak it into existence”: Aspirational Installations 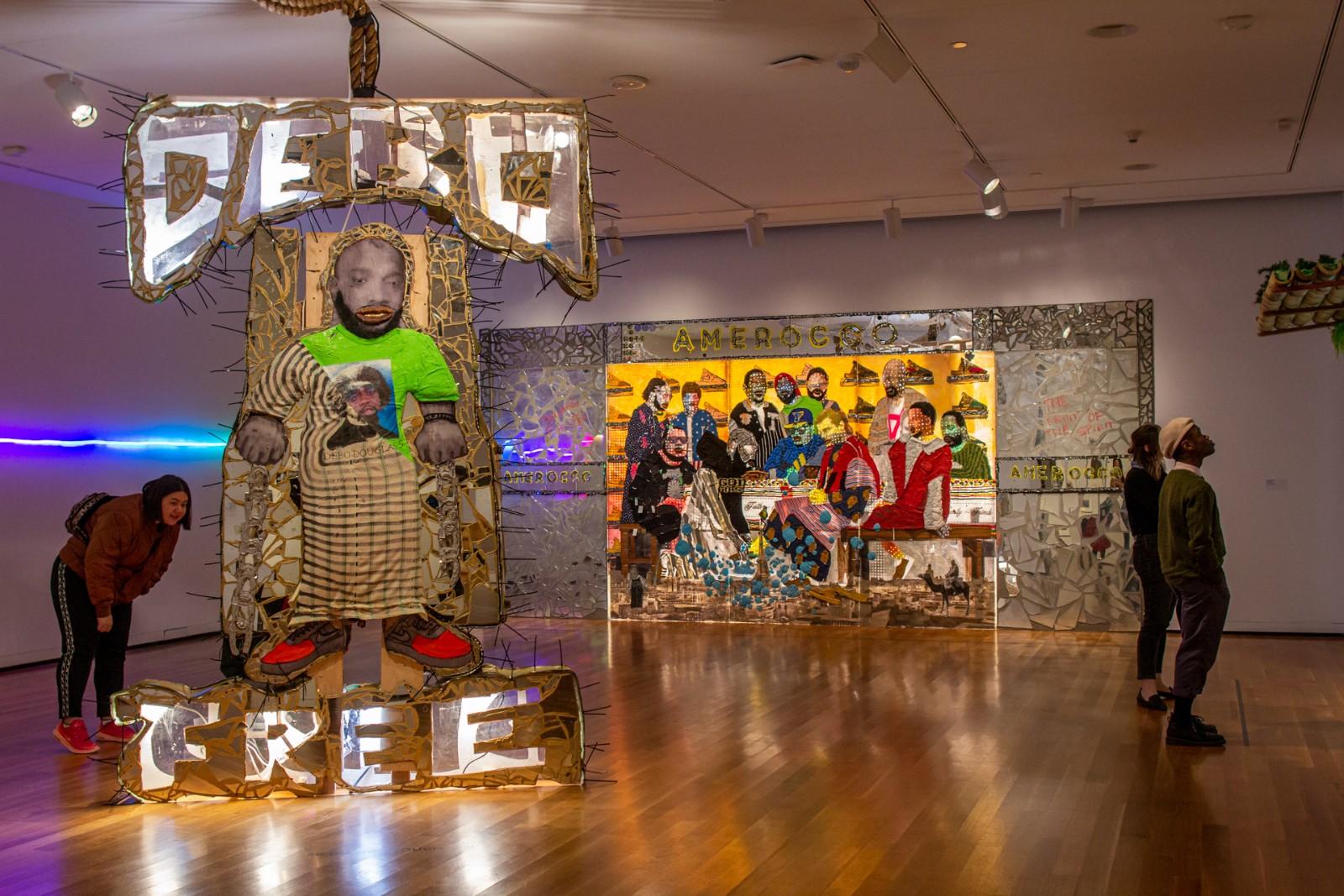 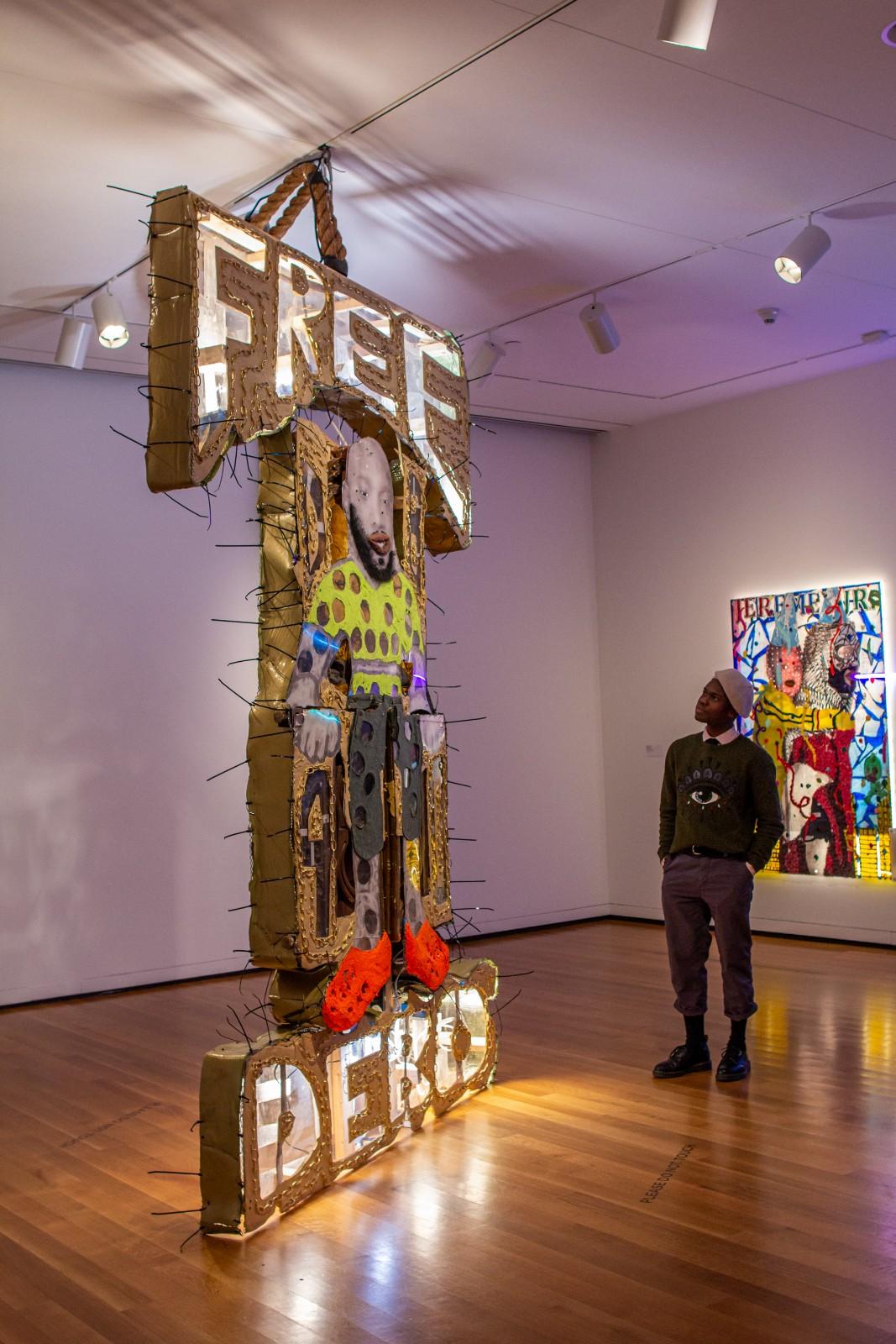 Into Existence illustrates dreams and ideas that Fowler wants to bring into being. The title echoes words of encouragement—almost a mantra—that the artist’s grandmother often says: “You need to speak it into existence.” At once paintings, sculptures, and installations, the works are densely layered with meaning and materiality.

Massive in scale, the works are made with materials sourced from the artist’s surroundings in Los Angeles and St. Louis, including cotton balls, afro wigs, hair weaves, broken mirrors, djellabas, sand, car parts, ropes, and lights. With references to American history, Black culture, contemporary public icons, and the artist’s family history, the works present real and imagined scenarios that are both universal and deeply personal.

In addition to this solo exhibition, staged in the museum’s Gwendolyn Knight & Jacob Lawrence Gallery, Fowler received a $10,000 award to further his artistic practice.

Aaron Fowler: Into Existence is curated by Sandra Jackson-Dumont, Frederick P. and Sandra P. Rose Chairman of Education at the Metropolitan Museum of Art. From 2006–2014, Jackson-Dumont was Deputy Director for Education and Public Programs/Adjunct Curator in Modern and Contemporary Art at SAM. Jackson-Dumont will be Director and CEO at the Lucas Museum of Narrative Art in Los Angeles beginning in January 2020.

AARON FOWLER
Aaron Fowler (b. 1988; St. Louis, MO) received his MFA from Yale University School of Art in 2014 and his BFA from the Pennsylvania Academy Fine Arts in 2011. He was an artist-in-residence at the Skowhegan School of Painting and Sculpture in 2014 and was the recipient of the Rema Host Mann Foundation Emerging Artist Grant in 2015. Fowler has exhibited throughout the United States and abroad, including shows at Saatchi Gallery, SCAD Museum of Art, The Rubell Family Collection, Beeler Gallery, Columbus College of Art and Design (solo), Diane Rosenstein Gallery (solo), and the Studio Museum in Harlem. He lives and works in Harlem, Los Angeles, and St. Louis. For more information, visit aaronfowler.art. 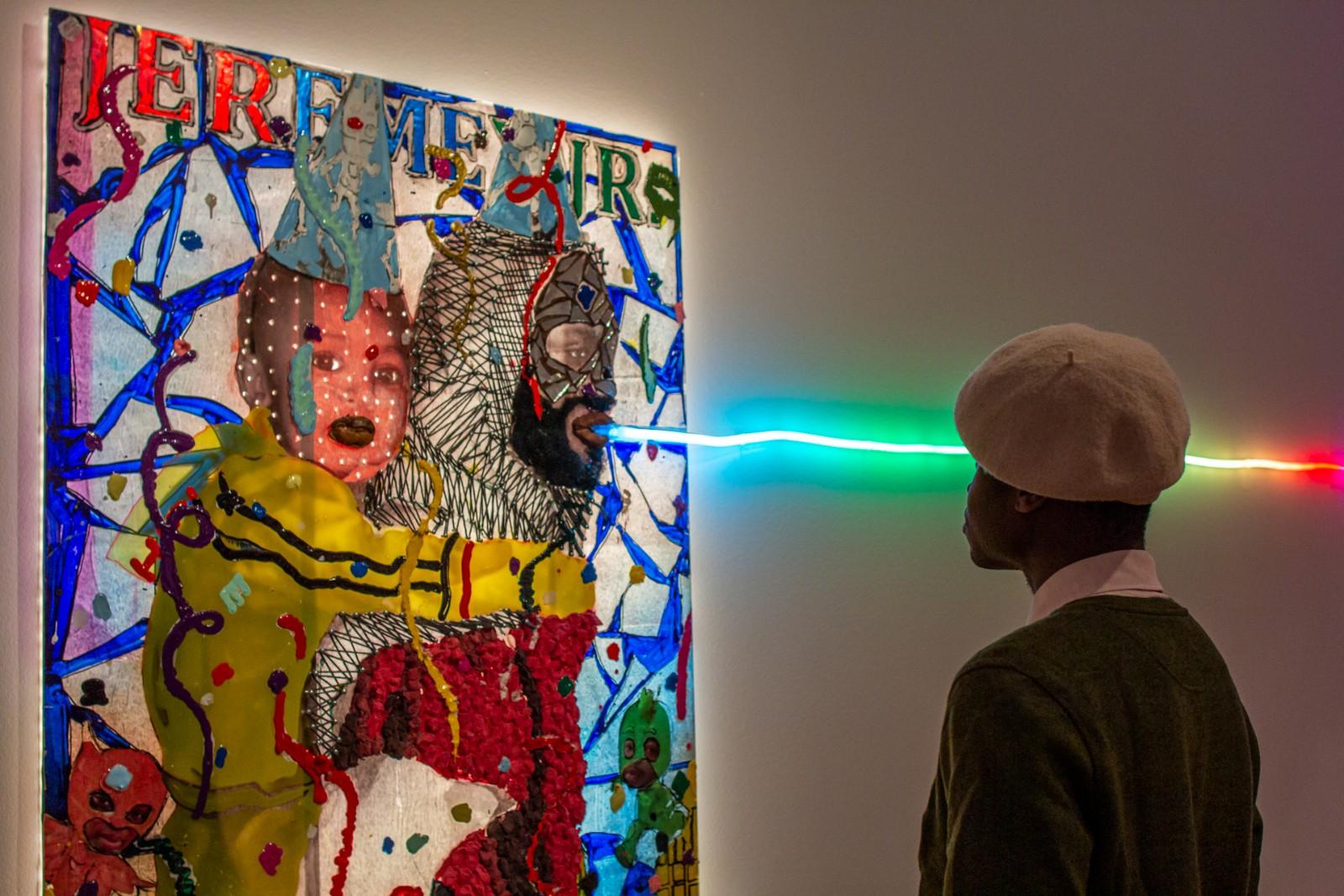 EXHIBITION ORGANIZATION AND SUPPORT
SAM’s Gwendolyn Knight and Jacob Lawrence Prize is awarded biannually to an early career black artist who has been producing work for less than 10 years.

ABOUT SEATTLE ART MUSEUM
As the leading visual art institution in the Pacific Northwest, SAM draws on its global collections, powerful exhibitions, and dynamic programs to provide unique educational resources benefiting the Seattle region, the Pacific Northwest, and beyond. SAM was founded in 1933 with a focus on Asian art. By the late 1980s the museum had outgrown its original home, and in 1991 a new 155,000-square-foot downtown building, designed by Venturi, Scott Brown & Associates, opened to the public. The 1933 building was renovated and reopened as the Asian Art Museum in 1994 and will reopen on February 8, 2020 following an extensive renovation and expansion. SAM’s desire to further serve its community was realized in 2007 with the opening of two stunning new facilities: the nine-acre Olympic Sculpture Park (designed by Weiss/Manfredi Architects)—a “museum without walls,” free and open to all—and the Allied Works Architecture designed 118,000-square-foot expansion of its main, downtown location, including 232,000 square feet of additional space built for future expansion. The Olympic Sculpture Park and SAM’s downtown expansion celebrated their tenth anniversary in 2017.