VMFA Collection to be Showcased in Winter Antiques Exhibition 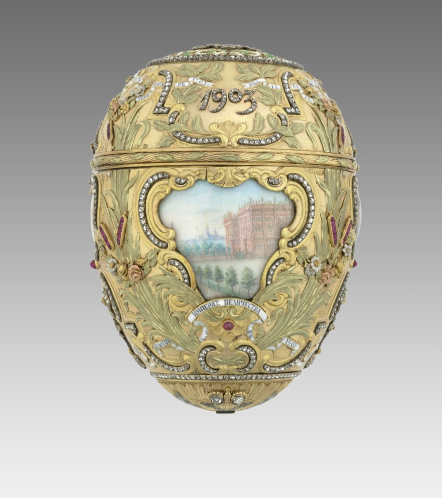 The Virginia Museum of Fine Arts will showcase a century of art patronage—including some of the most important and recognized pieces in its collections—in a special exhibition at the Winter Antiques Show, the leading art and antiques fair in the United States. Collecting for the Commonwealth/Preserving for the Nation: Celebrating a Century of Art Patronage, 1919-2018—Virginia Museum of Fine Arts will be on view January 19-28, 2018. Held at the historic Park Avenue Armory in New York, the Winter Antiques Show invites one institution to showcase its collection during the show, which benefits the East Side House Settlement.

Among cherished VMFA works to be on display are Fabergé’s Imperial Peter the Great Easter Egg, Paul Storr’s stunning Figure of Hebe, Vincent van Gogh’s masterful Daisies, Arles, Beauford Delaney’s Marian Anderson, and George Bellows’s Tennis at Newport. Together, the exhibition’s 48 varied works reveal as much about the museum’s maturation as the patrons who have shaped its encyclopedic collections.

“These works represent the great diversity and quality of VMFA’s collections as well as the tastes and histories of our donors,” said Alex Nyerges, VMFA Director. “We are delighted to bring this amazing cross-section of works—representing a spectrum of mediums, time periods, and cultures—to New York as a way of introducing new audiences to the treasures that can be viewed at VMFA.”

VMFA traces its philanthropic roots to 1919, when Judge John Barton Payne, shortly before beginning his term as U.S. Secretary of the Interior, donated 51 works of art to the Commonwealth and subsequently offered a $100,000 matching gift to found an art museum. In spite of the Great Depression, Governor John Garland Pollard secured the support to meet that challenge, and the two men established the first state-run art museum in the United States.

“Most extraordinary was Payne’s vision of an art museum as a catalyst for bringing people together and healing social wounds. It was good citizenship manifest as art patronage,” said Dr. Susan J. Rawles, Associate Curator of American Painting and Decorative Art, who curated the exhibition and wrote the accompanying catalogue. “Payne’s vision inspired others and, a century on, it’s time to celebrate the legacy of those generous donors and collectors who have created this world-class museum from his fledgling depression-era dream.”

VMFA built on art donations
Collecting for the Commonwealth/Preserving for the Nation traces the evolution of VMFA’s collections, which have been shaped by donors’ varied personal interests and leadership roles at the museum. Among the many VMFA donors celebrated in the exhibition are:

Patronage at VMFA today
Following the framework first established by Payne and Pollard, the Commonwealth of Virginia continues to provide for a portion of the museum’s infrastructure and administration. In addition to state funding, private patrons provide crucial financial support for both day-to-day operations and the purchase of new acquisitions for VMFA’s collections.

Exhibition Catalogue
The exhibition catalogue, Collecting for the Commonwealth/Preserving for the Nation: Celebrating a Century of Art Patronage, 1919-2018—Virginia Museum of Fine Arts, will be available at the Winter Antiques Show. Selected works for the exhibition will be removed from VMFA’s galleries beginning in December and are scheduled to be returned to display in February.

About the Winter Antiques Show
The Winter Antiques Show is the leading art, antiques, and design fair in America, featuring 70 of the world’s top experts in the fine and decorative arts. Held at the historic Park Avenue Armory in New York City, the show highlights a dynamic mix of works dating from ancient times through the present day and maintains the highest standards of quality in the art market. Each object at the fair is vetted for authenticity, date, and condition by a committee of 150 experts from the United States and Europe. Established in 1955, the Winter Antiques Show is an annual benefit for East Side House Settlement, a community-based organization serving the Bronx and Northern Manhattan. East Side House’s programs focus on education and technology as gateways out of poverty and as keys to economic opportunity.

About the Virginia Museum of Fine Arts
The Virginia Museum of Fine Arts in Richmond, Virginia, is one of the largest comprehensive art museums in the United States. VMFA, which opened in 1936, is a state agency and privately endowed educational institution. Its purpose is to collect, preserve, exhibit, and interpret art, and to encourage the study of the arts. Through the Office of Statewide Partnerships program, the museum offers curated exhibitions, arts-related audiovisual programs, symposia, lectures, conferences, and workshops by visual and performing artists. In addition to presenting a wide array of special exhibitions, the museum provides visitors with the opportunity to experience a global collection of art that spans more than 6,000 years. VMFA’s permanent holdings encompass nearly 40,000 artworks, including the largest public collection of Fabergé outside of Russia, the finest collection of Art Nouveau outside of Paris, and one of the nation’s finest collections of American art. VMFA is also home to important collections of Chinese art, English silver, and French Impressionist, Post-Impressionist, British sporting, and modern and contemporary art, as well as renowned South Asian, Himalayan, and African art. In May 2010, VMFA opened its doors to the public after a transformative expansion, the largest in its history. The Virginia Museum of Fine Arts is the only art museum in the United States open 365 days a year with free general admission. For additional information, telephone 804-340-1400 or visit www.vmfa.museum.