Uncanny Valley: Being Human in the Age of AI 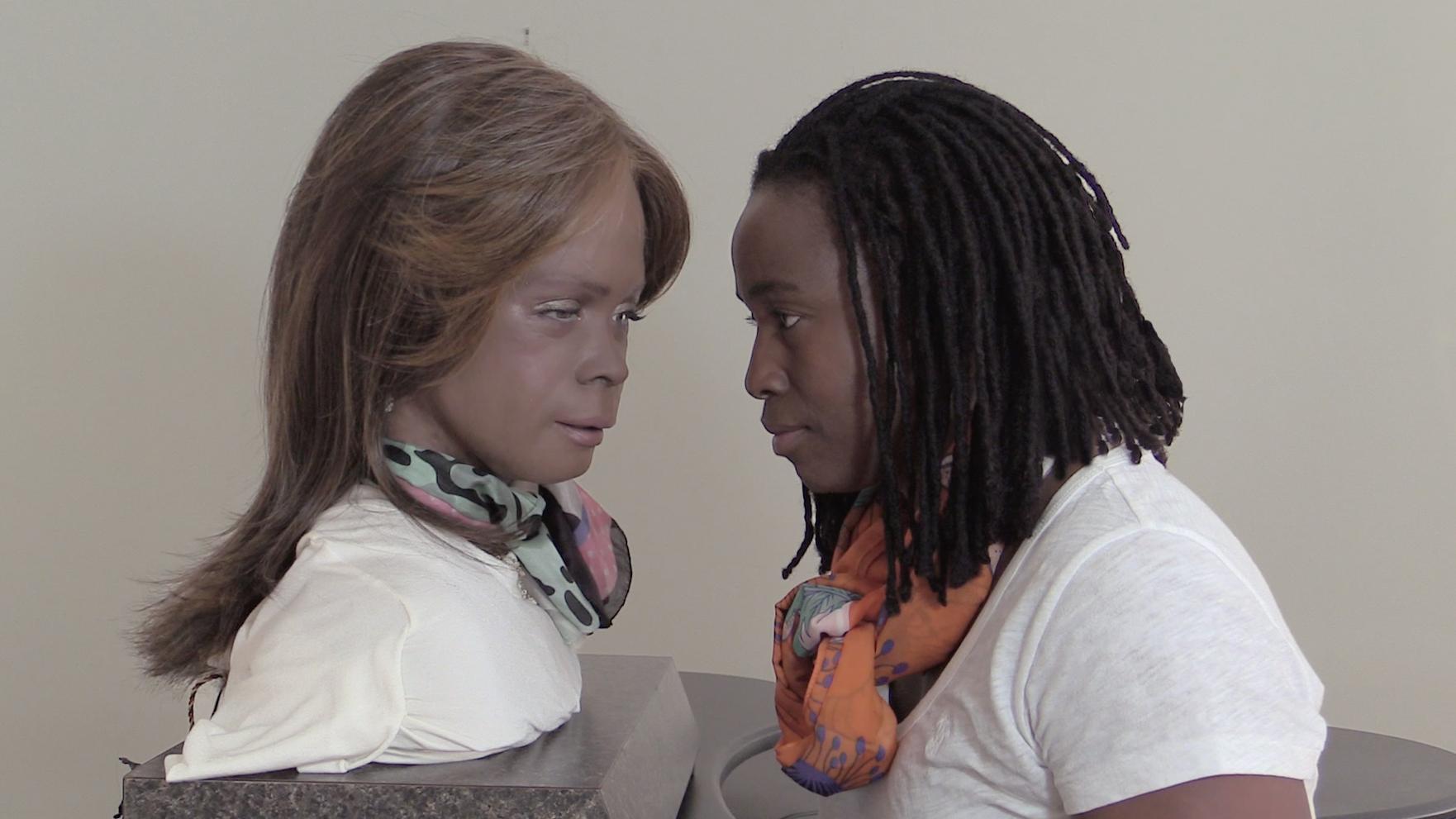 SAN FRANCISCO — As technological innovation continues to shape our identities and societies, the question of what it means to be, or remain human has become the subject of fervent debate. Taking advantage of the de Young museum’s proximity to Silicon Valley, Uncanny Valley: Being Human in the Age of AI arrives as the first major exhibition in the US to explore the relationship between humans and intelligent machines through an artistic lens. Organized by the Fine Arts Museums of San Francisco, with San Francisco as its sole venue, Uncanny Valley: Being Human in the Age of AI will be on view from February 22 to October 25, 2020.

“Technology is changing our world, with artificial intelligence both a new frontier of possibility but also a development fraught with anxiety,” says Thomas P. Campbell, Director and CEO of the Fine Arts Museums of San Francisco. “Uncanny Valley: Being Human in the Age of AI brings artistic exploration of this tension to the ground zero of emerging technology, raising challenging questions about the future interface of human and machine.” 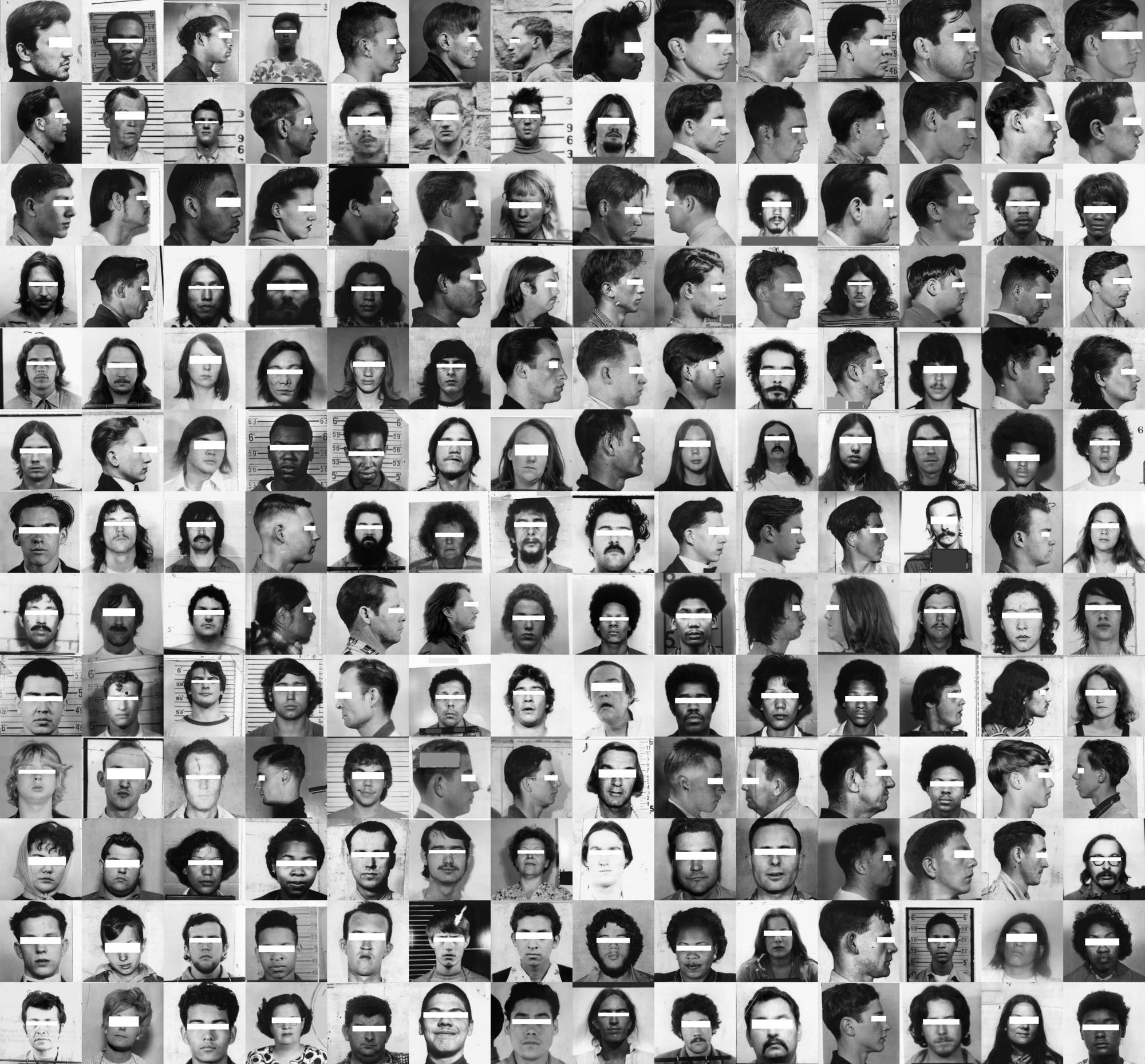 Trevor Paglen, Detail view of They Took the Faces from the Accused and the Dead... (SD18), 2019. Silver gelatine print, pins, 3240 individual images.

The Uncanny Valley
In 1970 Japanese engineer Masahiro Mori introduced the concept of the “uncanny valley” as a terrain of existential uncertainty that humans experience when confronted with autonomous machines that mimic their physical and mental properties. An enduring metaphor for the uneasy relationship between human beings and lifelike robots or thinking machines, the uncanny valley and its edges have captured the popular imagination ever since. Over time, the rapid growth and affordability of computers, cloud infrastructure, online search engines, and data sets have fueled developments in machine learning that fundamentally alter our modes of existence, giving rise to a newly expanded uncanny valley.

“As our lives are increasingly organized and shaped by algorithms that track, collect, evaluate, and monetize our data, the uncanny valley has grown to encompass the invisible mechanisms of behavioral engineering and automation,” says Claudia Schmuckli, Curator in Charge of Contemporary Art and Programming at the Fine Arts Museums of San Francisco. “By paying close attention to the imminent and nuanced realities of AI’s possibilities and pitfalls, the artists in the exhibition seek to thicken the discourse around AI. Although fables like HBO’s sci-fi drama Westworld, or Spike Jonze’s feature film Her still populate the collective imagination with dystopian visions of a mechanized future, the artists in this exhibition treat such fictions as relics of a humanist tradition that has little relevance today.” 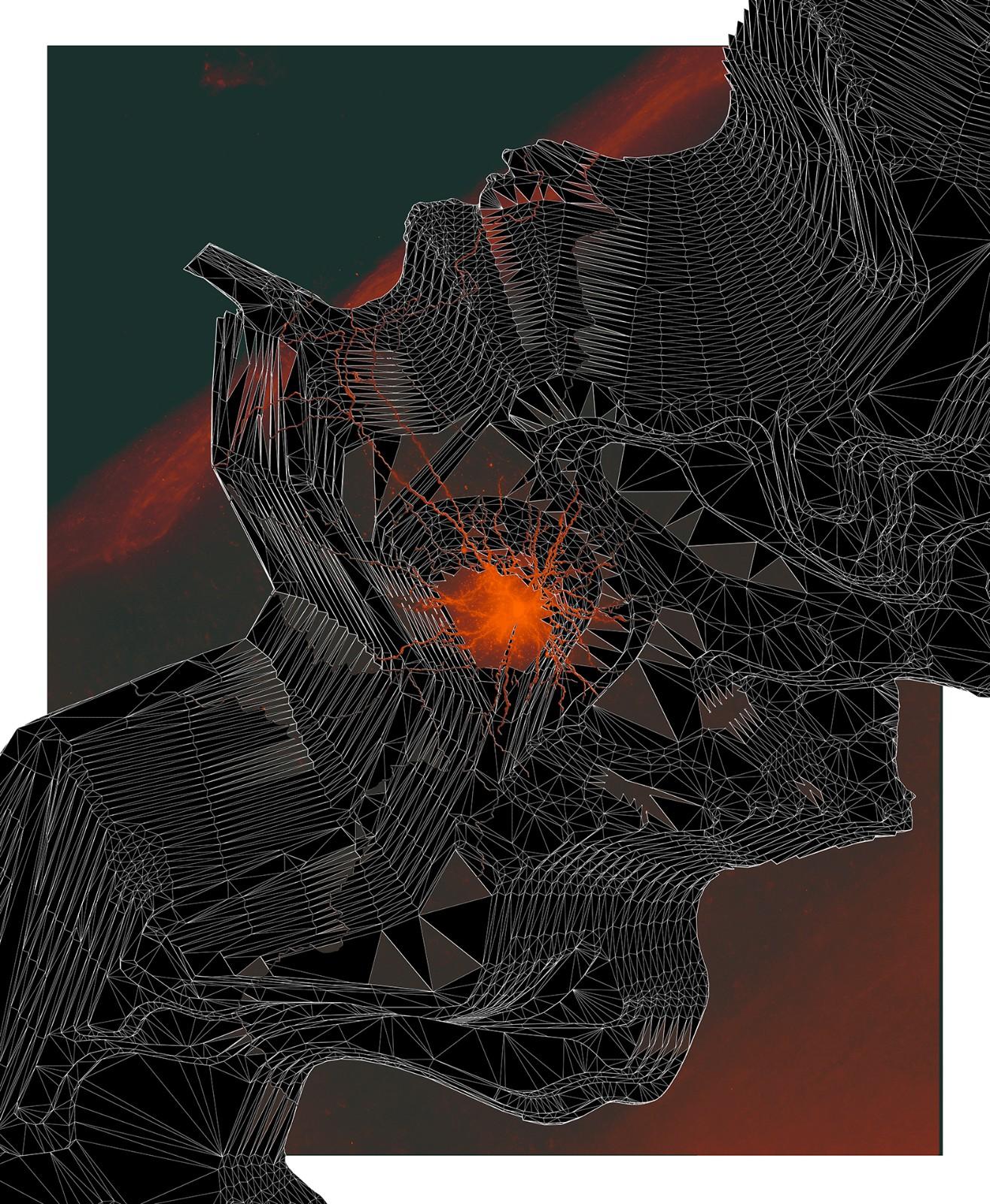 In Detail
Ian Cheng’s digitally simulated AI creature BOB (Bag of Beliefs) reflects on the interdependency of carbon and silicon forms of intelligence. An algorithmic Tamagotchi, it is capable of evolution, but its growth, behavior, and personality are molded by online interaction with visitors who assume collective responsibility for its wellbeing. In A.A.I. (artificial artificial intelligence), an installation of multiple termite mounds of colored sand, gold, glitter and crystals, Agnieszka Kurant offers a vibrant critique of new AI economies, with their online crowdsourcing marketplace platforms employing invisible armies of human labor at sub-minimum wages.

Simon Denny ‘s Amazon worker cage patent drawing as virtual King Island Brown Thornbill cage (US 9,280,157 B2: “System and method for transporting personnel within an active workspace”, 2016) (2019) also examines the intersection of labor, resources, and automation. He presents 3-D prints and a cage-like sculpture based on an unrealized machine patent filed by Amazon to contain human workers. Inside the cage an augmented reality application triggers the appearance of a King Island Brown Thornbill -- a bird on the verge of extinction; casting human labor as the proverbial canary in the mine. The humanitarian and ecological costs of today’s data economy also informs a group of works by the Zairja Collective that reflect on the extractive dynamics of algorithmic data mining.

Hito Steyerl addresses the political risks of introducing machine learning into the social sphere. Her installation The City of Broken Windows presents a collision between commercial applications of AI in urban planning along with communal and artistic acts of resistance against neighborhood tipping: one of its short films depicts a group of technicians purposefully smashing windows to teach an algorithm how to recognize the sound of breaking glass, and another follows a group of activists through a Camden, NJ neighborhood as they work to keep decay at bay by replacing broken windows in abandoned homes with paintings.

Addressing the perpetuation of societal biases and discrimination within AI, Trevor Paglen’s They Took the Faces from the Accused and the Dead…(SD18), presents a large gridded installation of more than three thousand mugshots from the archives of the American National Standards Institute. The institute's collections of such images were used to train ealry facial-recognition technologies -- without the consent of those pictured. Lynn Hershman Leeson’s new installation Shadow Stalker critiques the problematic reliance on algorithmic systems, such as the military forecasting tool Predpol now widely used for policing, that categorize individuals into preexisting and often false “embodied metrics.”

Stephanie Dinkins extends the inquiry into how value systems are built into AI and the construction of identity in Conversations with Bina48, examining the social robot’s (and by extension our society’s) coding of technology, race, gender and social equity. In the same territory, Martine Syms posits AI as a “shamespace” for misrepresentation. For Mythiccbeing she has created an avatar of herself that viewers can interact with through text messaging. But unlike service agents such as Siri and Alexa, who readily respond to questions and demands, Syms’s Teeny is a contrarious interlocutor, turning each interaction into an opportunity to voice personal observations and frustrations about racial inequality and social injustice.

Countering the abusive potential of machine learning, Forensic Architecture pioneers an application to the pursuit of social justice. Their proposition of a Model Zoo marks the beginnings of a new research tool for civil society built of military vehicles, missile fragments, and bomb clouds—evidence of human-rights violations by states and militaries around the world. Christopher Kulendran Thomas’s video Being Human, created in collaboration with Annika Kuhlmann, poses the philosophical question of what it means to be human when machines are able to synthesize human understanding ever more convincingly. Set  in Sri Lanka, it employs AI-generated characters of singer Taylor Swift and artist Oscar Murillo to reflect on issues of individual authenticity, collective sovereignty, and the future of human rights.

Lawrence Lek’s sci-fi-inflected film Aidol, which explores the relationship between algorithmic automation and human creativity, projects this question into the future. It transports the viewer into the computer-generated “sinofuturist” world of the 2065 eSports Olympics: when the popular singer Diva enlists the super-intelligent Geomancer to help her stage her artistic comeback during the game’s halftime show, she unleashes an existential and philosophical battle that explodes the divide between humans and machines. 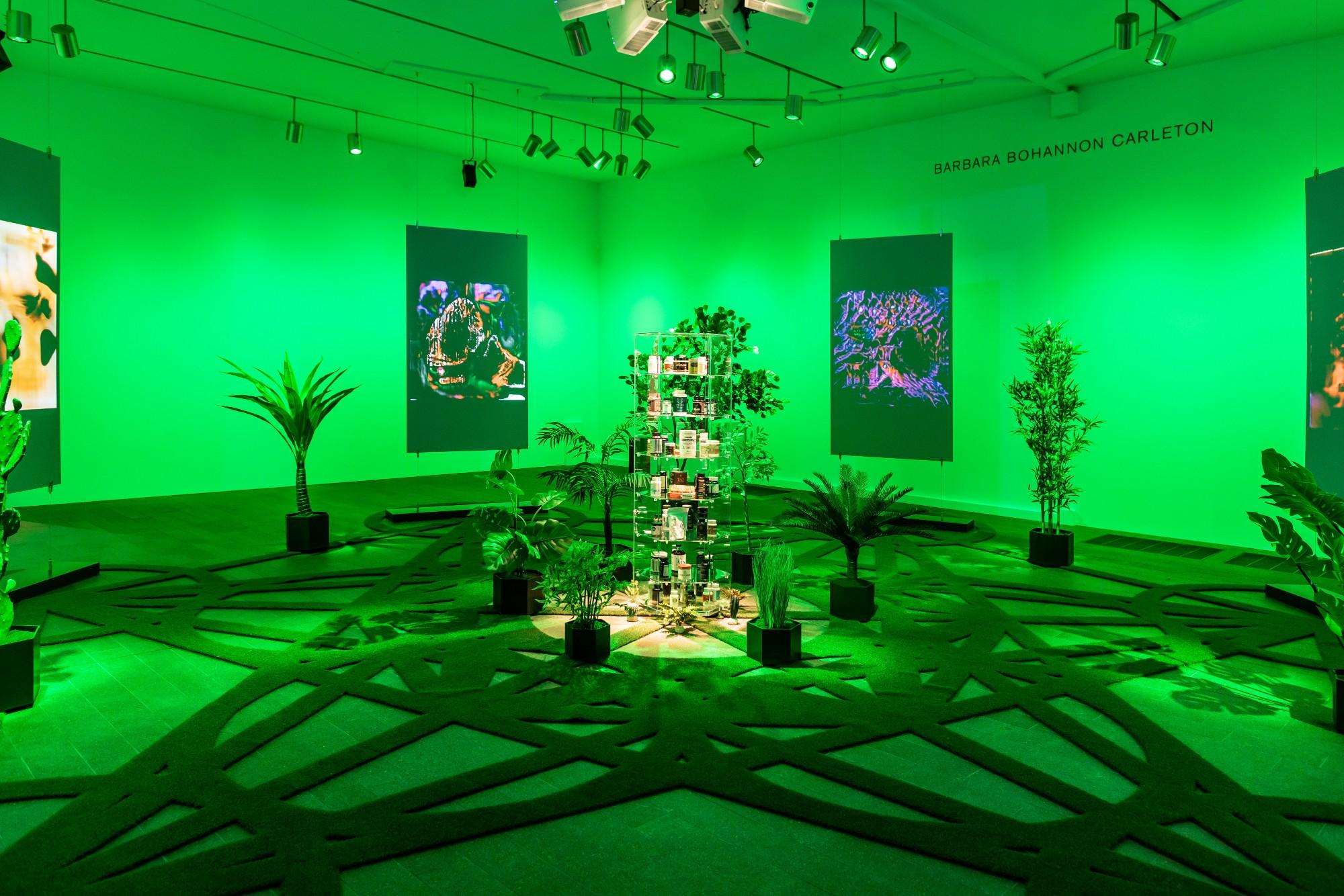 courtesy of the Fine Arts Museums of San Francisco, Photo by Gary Sexton

Installation view of Zach Blas, The Doors in Uncanny Valley: Being Human in the Age of AI at the de Young museum.

The Doors, a newly commissioned installation by Zach Blas, by contrast shines the spotlight back onto the present and on the culture and ethos of Silicon Valley -- the ground zero for the development of AI. Inspired by the ubiquity of enclosed gardens on tech campuses, he has created an artificial garden framed by a six-channel video projected on glass panes that convey a sense of algorithmic psychedelia aiming to open new “doors of perception.” While luring visitors into AI’s promises, it also asks what might become possible when such glass doors begin to crack.

Unveiled in late spring Pierre Huyghe's Exomind (Deep Water), a sculpture of a crouched female nude with a live beehive as its head will be nestled within the museum’s garden. With its buzzing colony pollinating the surrounding flora, it offers a poignant metaphor for the modeling of neural networks on the biological brain and an understanding of intelligence as grounded in natural forms and processes.

Uncanny Valley: Being Human in the Age of AI is organized by Claudia Schmuckli, Curator in Charge of Contemporary Art and Programming at the Fine Arts Museums of San Francisco.