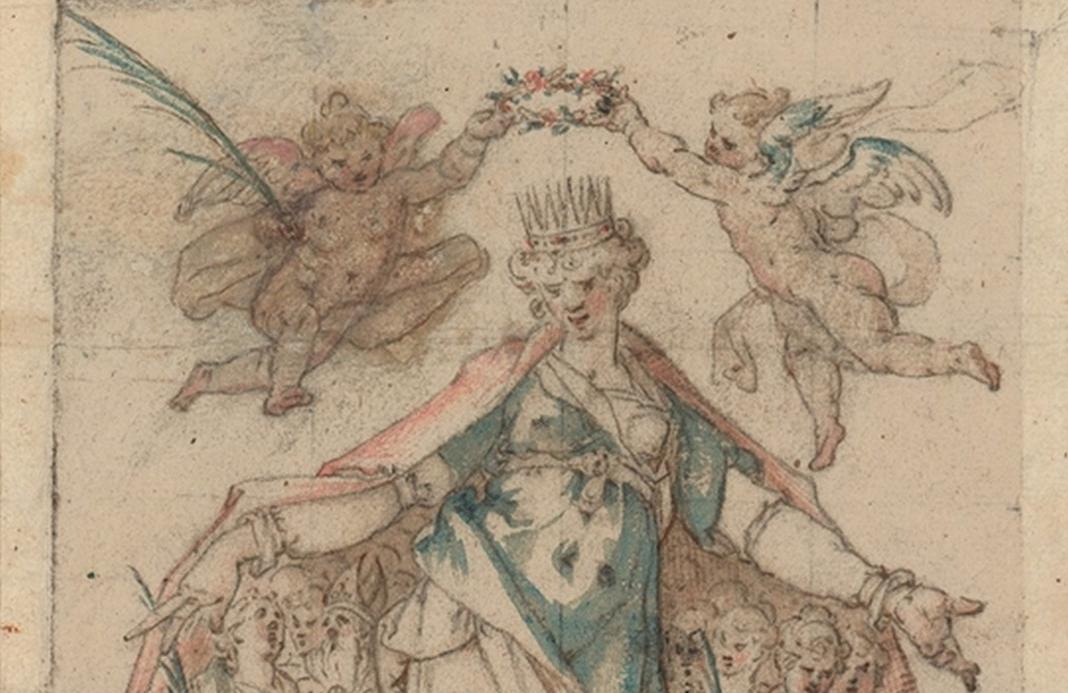 NEW YORK CITY — Three years ago, when art dealer Christopher Bishop saw a drawing from a private collection, he knew it was something special. The young saint featured in the drawing, protecting a group of female followers with her cloak, had all the presence and power of Michelangelo’s marble Madonnas coupled with the elegance of a Parmigianino drawing. The triumphant martyred Saint Ursula is depicted with her cult of virgin followers, part commanding queen, part welcoming mother, part saintly intercessor.

Who could have created this masterpiece, a unique combination of Renaissance Italian elegance and Northern Mannerist eccentricity? To Bishop’s expert eye, there was only one plausible answer: Bartholomeus Spranger (Antwerp 1546 - Prague 1611), the quintessential artist of Rudolphine Prague, the only truly international Mannerist artist. His fame, which captured the imagination of both Pope Pius IV and the Holy Roman Emperor himself, was well merited.

Spranger’s rediscovered drawing of Saint Ursula will be on view in Art and Sensuality in Imperial Prague: The (Un)veiling of Bartholomeus Spranger’s Saint Ursula at Christopher Bishop Fine Art in New York City from June 11 through September 30, 2021. A forthcoming catalog will feature an essay by Sally Metzler, guest curator of The Metropolitan Museum of Art’s 2014 exhibition Bartholomeus Spranger: Splendor and Eroticism in Imperial Prague. The catalog reveals how Renaissance notions of femininity and strength, sensuality and religion, saintly virginity, and physical beauty are more complex than commonly assumed.

“Only Spranger’s uniquely inventive genius could have broken open the symbolism of this iconic Northern saint, bringing her alive, rendering her in contrasting touches of color which depict both her strength and femininity, and expressing a lively sensuality that was risqué for its time,” said Bishop.

The Metropolitan Museum of Art’s 2014 exhibition made the case that Spranger was one of the most important and influential artists of the era. The exhibition catalog by Metzler was the first Spranger monograph in English, and it reproduced the Saint Ursula drawing in black and white, listing it as “location unknown.” “The drawing of Saint Ursula has been known to Spranger scholars since an image was featured in a Vienna auction catalog in 1953,” notes Bishop, “However, the location of the drawing was lost to history.”

Spranger’s drawing is preparatory to an important altarpiece now in Vilnius, Lithuania. The drawing was likely presented to an ecclesiastical patron for approval. Yet, the finished altarpiece has little of the sensuality of this exquisite drawing. “Between the drawing and the final work an editing process has taken place: the visceral beauty of the saint’s body and garb has been toned down for the religious public. This crucial change only adds to the intrigue of the rediscovery of this masterful drawing, which shows Spranger’s full genius,” said Bishop.

“The precise journey of the drawing from Spranger’s hand to its current destination is cloaked in mystery. Last seen in public in Vienna at the Nebehey auction house in 1958, the drawing remained buried in the annals of art historical scholarship, and known only through black and white photographs. The discovery of this drawing after sixty-three years—in America no less—is nothing short of remarkable, and surely a sign of admiration for Spranger and manifestation of his universal appeal,” writes Metzler in the new catalog, which will accompany the exhibition of the Saint Ursula drawing at Christopher Bishop Fine Art. 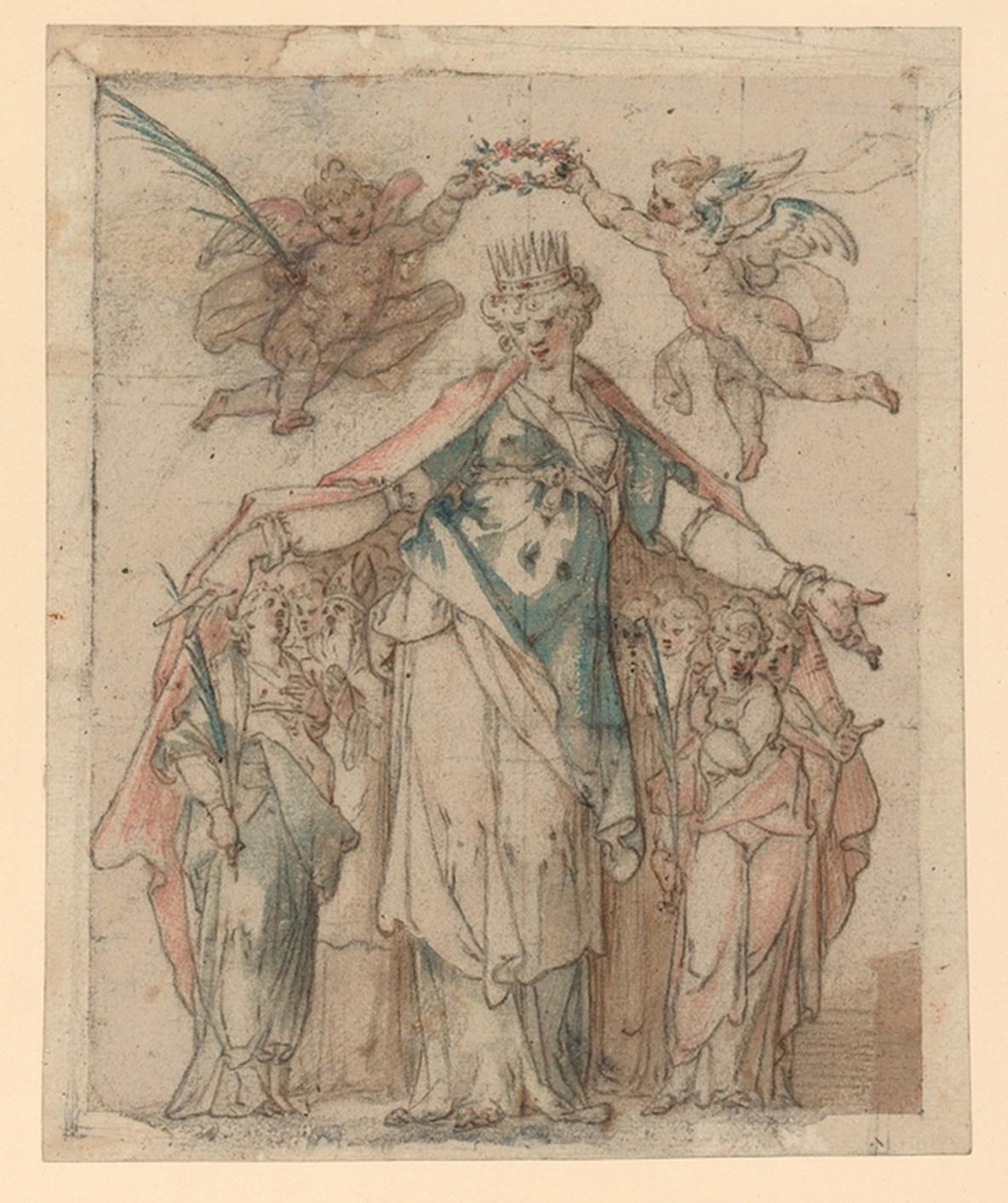 Antwerp-born, Spranger was a renowned and influential artist during his lifetime and enjoyed a successful career spanning Holland, France, Italy, and ending triumphantly in Prague. He studied in Rome with Giulio Clovio (Grižane- Belgrad 1498 – Rome 1578), the extraordinary miniaturist painter who studied with Michelangelo (Caprese Michelangelo 1475 – Rome 1564) and was friends with El Greco (1541 Heraklion – Toledo 1614). Clovio recommended him to Cardinal Alessandro Farnese, one of the major collectors and patrons of the time, and Spranger went to work in his mansion Villa Caprarola. In 1570, Spranger was called to work for Pope Pius V in Rome. Positions followed with the Holy Roman Emperor Maximilian II (Vienna 1527 – Regensburg 1576) in Vienna, and his successor the Holy Roman Emperor Rudolf II (Vienna 1552 – Prague 1612) in Prague.

Works by Spranger are also in the collections of The Metropolitan Museum of Art, New York; British Museum, London; and the Rijksmuseum, Amsterdam.

About Christopher Bishop Fine Art Christopher Bishop Fine Art specializes in drawings from the fifteenth through early twentieth century. The gallery is located at 1046 Madison Avenue at East 80th Street. Known for a scholarly approach to evaluating, presenting, and authenticating Old Master works as well as a wide range of works on paper, the gallery seeks to present new ways to think about and collect Old Masters and modern works on paper. The gallery participates in Master Drawings New York; The Salon du Dessin, Paris; and October Art Week, New York. More information is available at christopherbishopfineart.com.