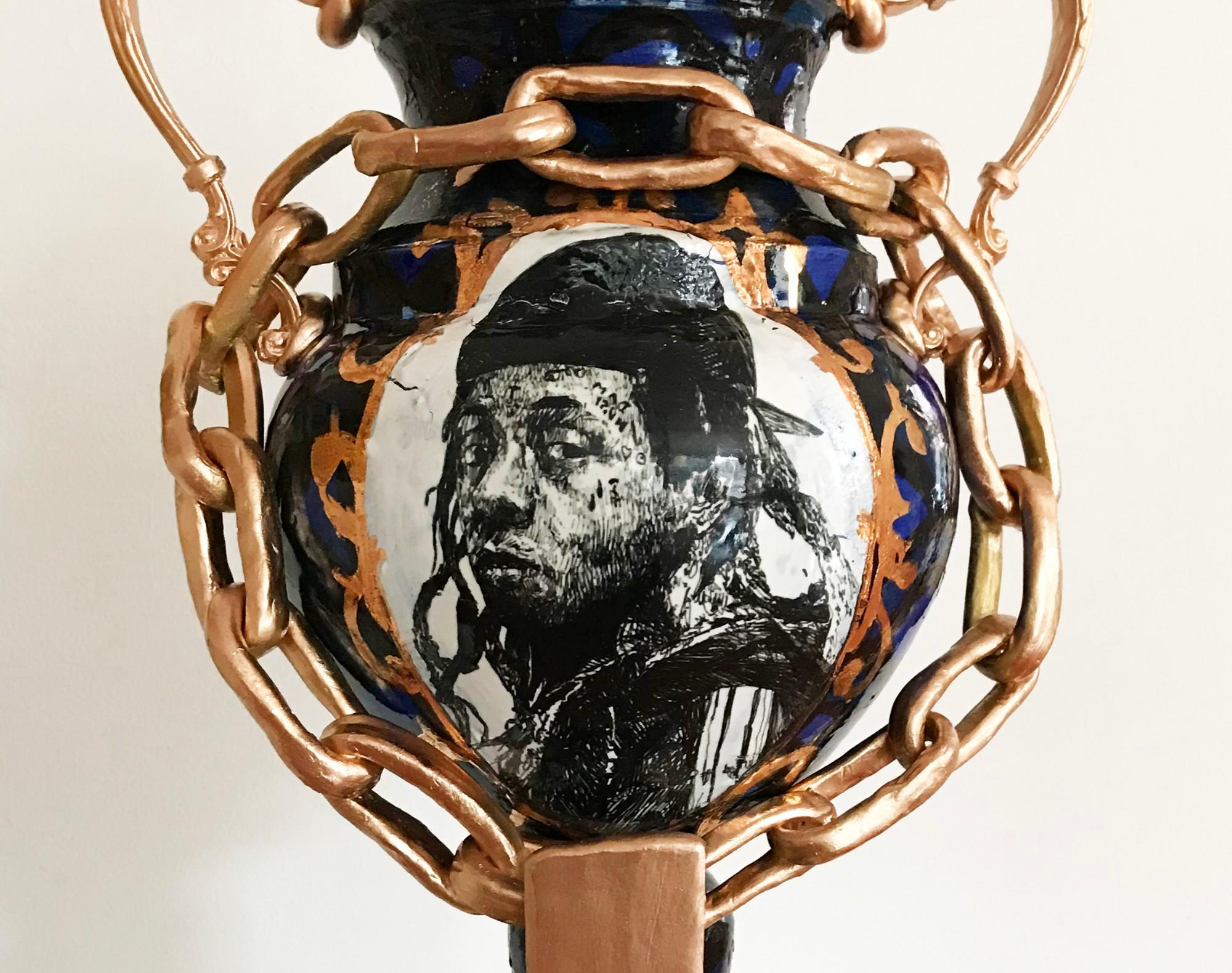 NEW ORLEANS, LA — In 2019, the New Orleans Museum of Art commissioned Philadelphia-based artist Roberto Lugo to create the “Stunting” Garniture Set, a set of porcelain covered vases and sculpture that expands the parameters of NOMA’s ceramics collection to highlight New Orleans music icons Louis Armstrong, Lil Wayne, and No Limit Records. “Stunting” will be on view in the museum’s Elise M. Besthoff Charitable Foundation Gallery from September 2, 2020 through April 18, 2021 before becoming a permanent installation within the decorative arts galleries. Best known for cultural mashups that blend contemporary social issues with traditional porcelain pottery, Lugo’s powerful commentary on poverty, inequality, and racial injustice has made him a defining artist of the moment. 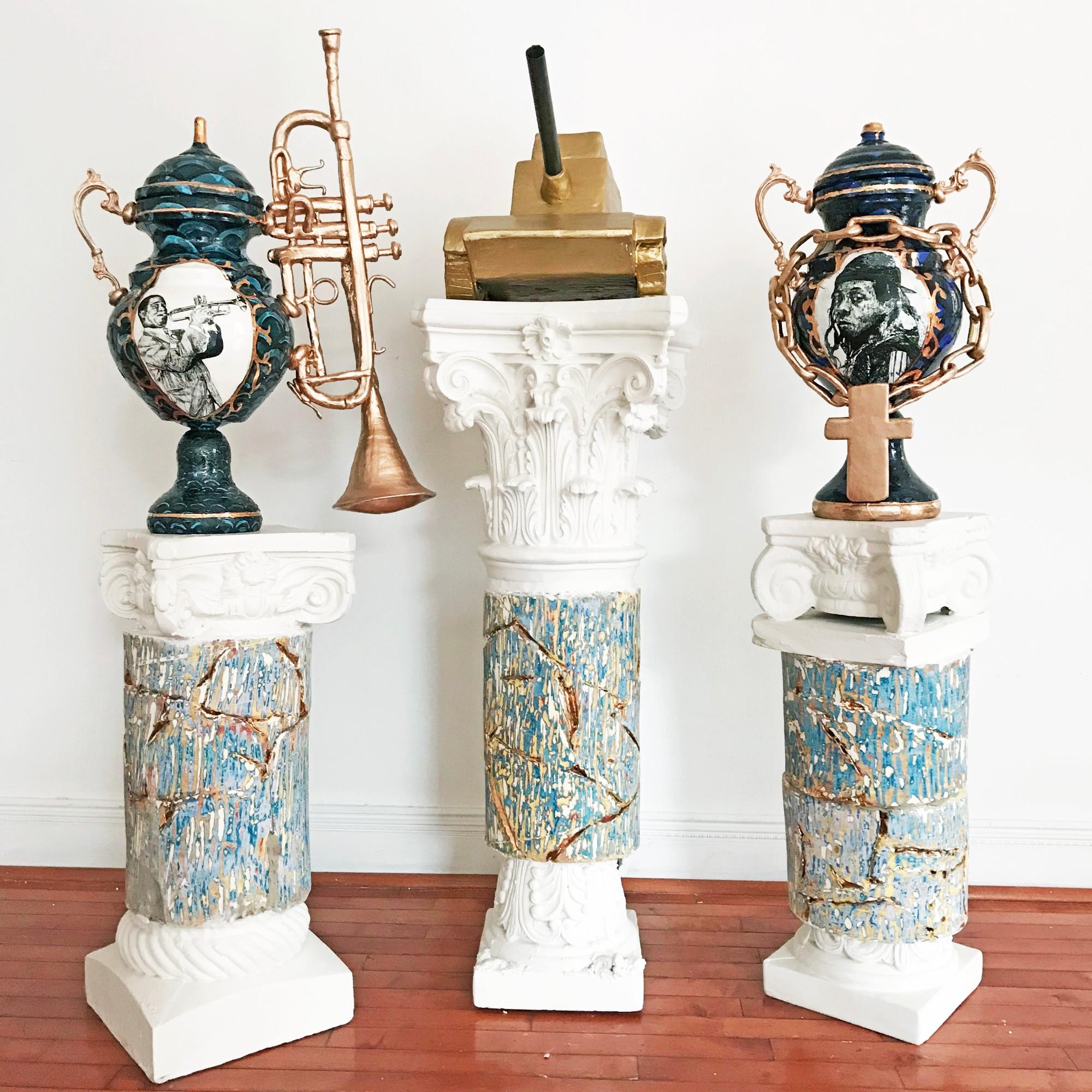 “My ‘Stunting’ Garniture Set references influential members of the Black New Orleans community in American society, highlighting the visual connection between hip-hop ‘bling’ and Sèvres porcelain in NOMA’s collection,” says Lugo. “Lil Wayne is considered the most influential hip-hop artist of the last decade. His public image is heavily embellished with measuring success by excessive wealth and glorifying gang violence. The gold tank represents No Limit Soldiers, the 1990s hip-hop artists responsible for coining the sound of ‘southern rap.’ In contrast, jazz legend Louis Armstrong is beloved by a much broader audience. By placing these figures together, I am able to examine more closely how to bring the hip-hop community to the forefront.” 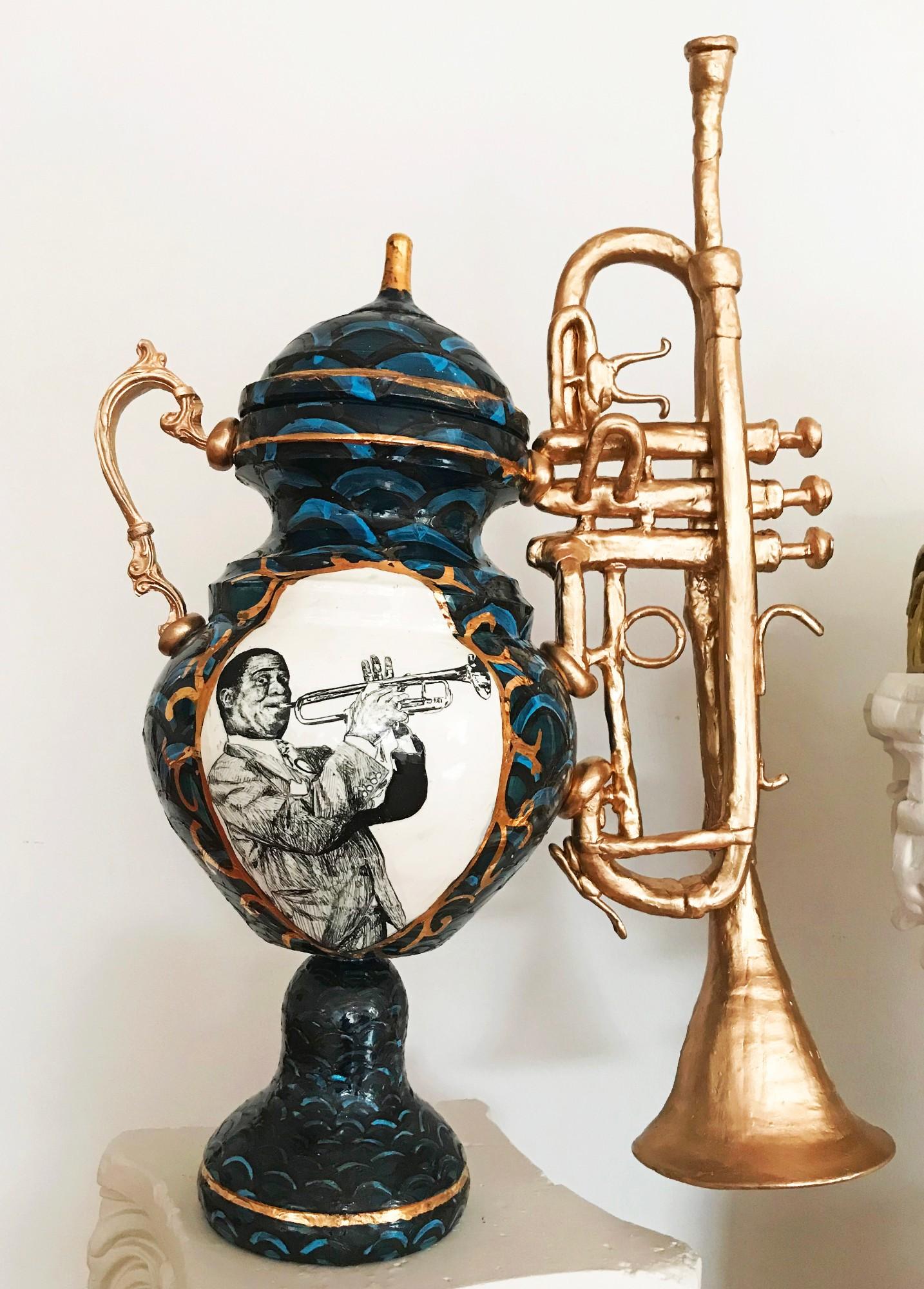 “NOMA has long encouraged artists to engage with our permanent collection, drawing connections between contemporary issues and 5,000 years of world artistic culture,” says Susan Taylor, NOMA’s Montine McDaniel Freeman Director. “This commissioned work by Roberto Lugo gives NOMA a critical lens to address with our audiences the omissions in museum representation and collecting.”

The “Stunting” Garniture Set installation includes the screening of the artist’s 2014 performance piece, Ghetto is Re•source•ful. Filmed in an abandoned city lot in his childhood neighborhood, the video shows Lugo constructing a potter’s wheel from found objects and throwing a bowl using dirt and beer sourced from the lot, all overlaid with biographical stories told through spoken-word poetry. The last frame of the video shows Lugo in his studio, wiping wet clay off of a ceramics wheel scrawled with the words “This Machine Kills Hate.”

About the Artist
Roberto Lugo is an American artist, ceramicist, social activist, spoken-word poet, and educator. Lugo uses porcelain, a traditionally precious material, as his medium of choice, illuminating its aristocratic surface with a twenty-first-century street sensibility. He paints traditional Asian and European porcelain forms by hand with classic decorative patterns laced with elements of urban graffiti. Lugo’s pots highlight portraits of individuals whose faces are historically absent on this type of luxury item—people like Sojourner Truth, Dr. Cornel West, The Notorious BIG, and very often the artist himself.

Born in the Kensington neighborhood of Philadelphia to Puerto Rican parents, Lugo was a graffiti artist before taking his first pottery class at age 25. The artist holds a BFA from the Kansas City Art Institute and an MFA from Penn State, and is currently Associate Professor and Head of Ceramics at the Tyler School of Art in Philadelphia. In 2019, Lugo became the first ceramicist to win the prestigious Rome Prize.