A Monument that Challenges the Meaning of the Flag 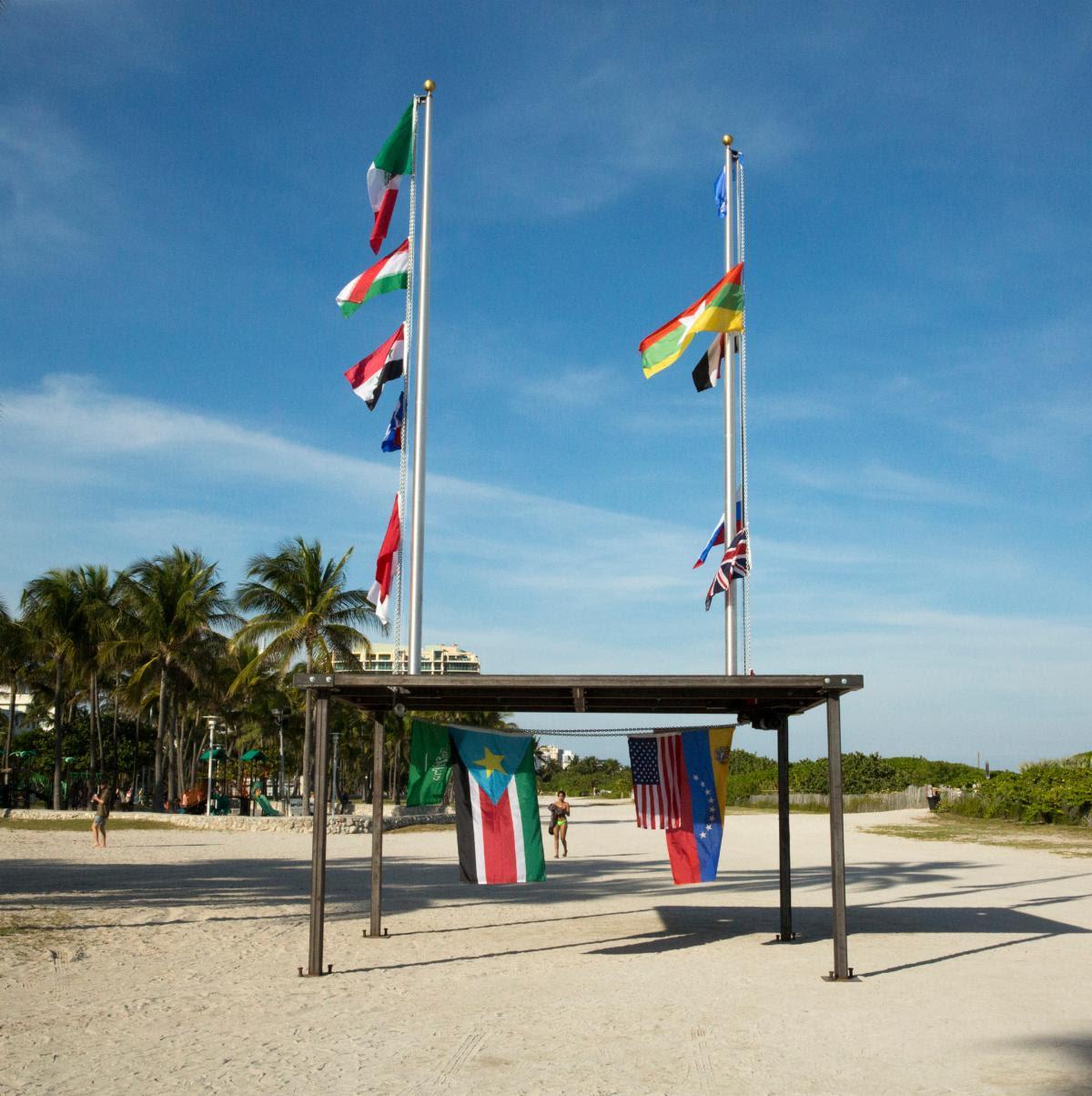 Courtesy of the artists

Antonia Wright and Ruben Millares, It is not down on any map; true places never are, 2019.

Miami – As part of the 2019 UNTITLED ART FAIR’s new initiative Monuments, Miami based artists Antonia Wright and Ruben Millares present It is not down on any map; true places never are, a kinetic outdoor sculpture that challenges the meaning of the flag in the contemporary world. Two flagpoles are connected by one motorized chain that pulls 16 flags up and down each beam continuously. As the flags rise and lower along the poles their order is in constant flux to contest the illusion of power dynamics and the existing absurdity of the hegemonic world order.

A performative installation, the flags intentionally break and manipulate the traditional rules of flag code to question the myth of globalization and equality. It is not down on any map; true places never are serves as a contradiction to these rules in which international usage forbids the display of the flag of one nation above that of another nation. 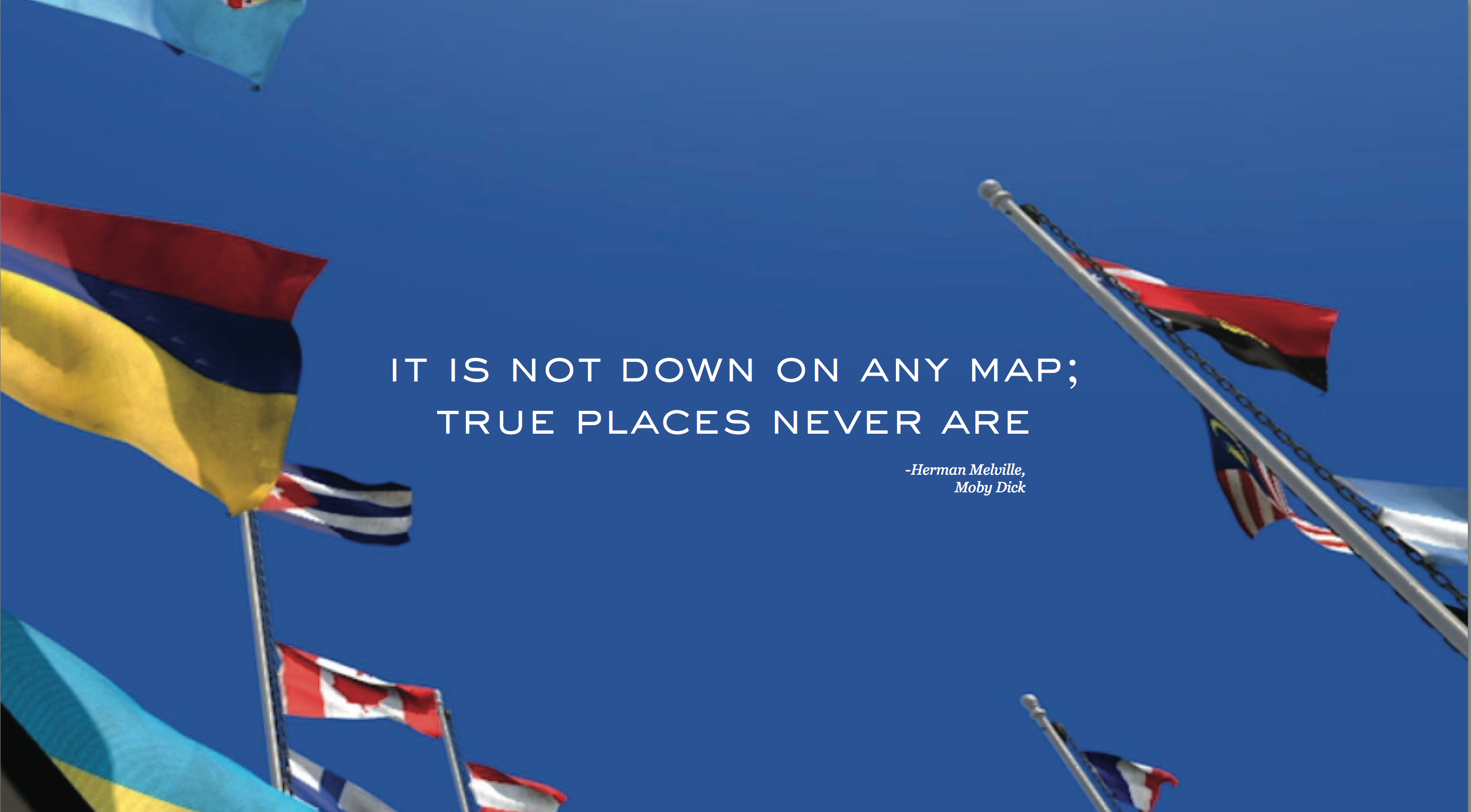 The flagpoles are transformed into kinetic sculptures to explore the intersection between performance and sculpture. Physically embodying the mechanics of power dynamics, the sculpture animates the flags to offer a participatory and contemplative place that highlights the role of the body in space. Located on the sand during one of the largest art fairs in the world, the flags demarcate a transnational non-space. Now more than ever, this piece speaks critically to the rising popularity of nationalism, crushing neocolonialism, the devastating population without a home seeking asylum, and the displacement of people due to issues including the global climate crisis and regional wars. The artists have chosen a sample of flags that stand in for the multitude of countries facing these same issues worldwide. 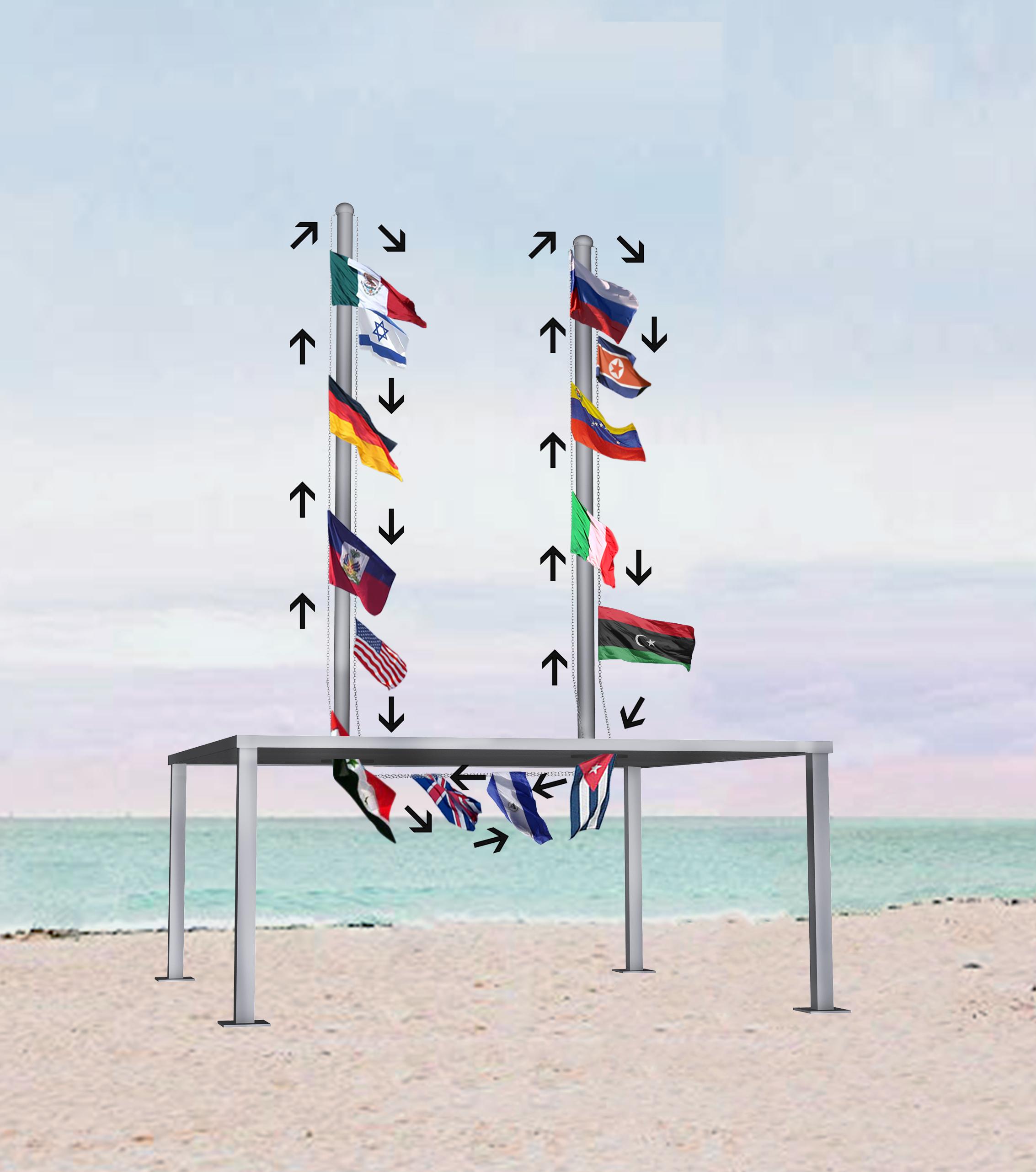 A collaboration between Antonia Wright and Ruben Millares, artists who have been working together for almost 10 years, this project is a continuation of their interest in using the body to challenge social conventions and explore issues of identity. The artists’ recent work has moved away from using their live presence in each project, but to replace their physical bodies with performative installations to show how the machine can serve as a surrogate to the figure.

Antonia Wright is a Cuban-American artist born in Miami, Florida. Wright received her MFA in Poetry from The New School in New York City in 2005 as well as at the International Center of Photography for photo and video in 2008. She has exhibited in the U.S. and abroad and has been awarded artist’s residencies both nationally and internationally. Exhibitions include shows at The Hirshhorn Museum and Sculpture Garden (Washington, D.C.), The Perez Art Museum (Miami), Pioneer Works (New York), The Faena Arts Center (Buenos Aires, Argentina), The Margulies Collection at the Warehouse, Vizcaya Museum and Gardens, Spinello Projects (Miami, FL), Luis de Jesus Gallery (Los Angeles, CA), San Francisco Arts Commission Galleries (SF, CA), Aeroplastics (Brussels, Belgium), The National Gallery of Art (Nassau, Bahamas), and Ping Pong (Basel, Switzerland). In April 2012, she became and founded the first artist-in-residence at the Lotus House Shelter for women and children in Overtown, Miami. She was recently named a CINTAS Foundation Fellowship finalist for 2019 in Visual art. She is represented by Spinello Projects in Miami, FL and affiliated with Luis De Jesus Gallery Los Angeles.

Millares work has been featured in the Miami Herald, Miami New Times, St. Petersburg Times and El Nuevo Herald among others and featured in the ArtNewspaper’s Basel edition on Miami artists. He has also participated in prestigious artist residencies including Pioneer Works, Red Hook, NY and Elsewhere, Greensboro, NC.

Monuments is a new initiative by UNTITLED, ART focusing on bringing large-scale, site-specific installations to the public in Lummus Park.