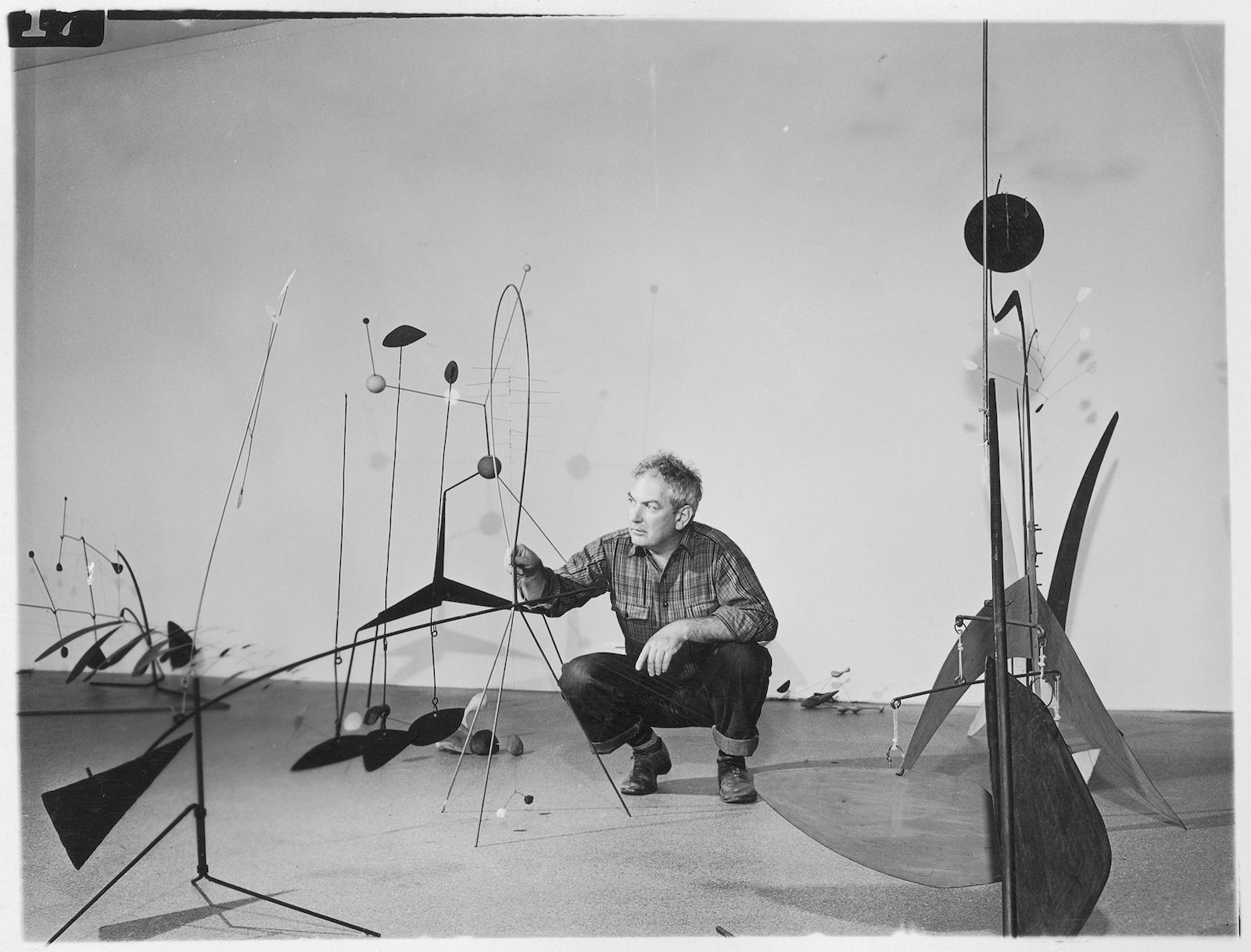 NEW YORK — The Museum of Modern Art announces Alexander Calder: Modern from the Start, a focused look at one of the most well-known and beloved artists of the twentieth century through the lens of his relationship with MoMA. On view from March 14, 2021, through August 7, 2021, Alexander Calder: Modern from the Start will include approximately seventy artworks paired with film, historical photographs, and other archival materials drawn from MoMA’s collection and augmented by key loans from the Calder Foundation, New York. The exhibition is organized by Cara Manes, Associate Curator, with Zuna Maza and Makayla Bailey, Curatorial Fellows, Department of Painting, and Sculpture.

The exhibition will take as a point of departure the idea that Alexander Calder (American, 1898–1976) assumed the unofficial role of the Museum’s “house artist” during its formative years. His work was first exhibited at MoMA in 1930, months after the institution opened its doors, and he was among only a handful of artists selected by the Museum’s founding director, Alfred H. Barr Jr., for inclusion in his two landmark 1936 exhibitions, Cubism and Abstract Art and Fantastic Art, Dada, Surrealism. To inaugurate the then-new Goodwin and Stone Building in 1939, Calder was commissioned to make a hanging mobile for its interior “Bauhaus Staircase”; the resulting Lobster Trap and Fish Tail still hangs there today.

Calder also worked closely with curator James Johnson Sweeney, in collaboration with artists Marcel Duchamp and Herbert Matter, on the checklist, catalogue, and installation of his major 1943 midcareer retrospective at MoMA, which introduced the artist, by then already known in Europe, to a broad American audience, through a survey of work made since his foundational years in the late 1920s living and working in Paris, at the heart of the international avant-garde. Throughout the 1940s and 1950s, Calder’s sculptures were a mainstay of the Abby Aldrich Rockefeller Sculpture Garden, where they have continued to reappear in the intervening decades. Ten years before his death, in 1966, Calder made an impressive gift of nineteen artworks to MoMA in order to round out the institution’s holdings.

Aligned with the Museum’s commitment to exploring all facets of its collection, Modern from the Start will take a deep dive into the work of Calder and provide a timely opportunity to revisit his legacy. Following a loose chronology, the exhibition will present examples from the full scope of Calder’s work, from the earliest wire sculptures of the 1920s through the largescale mono- and polychrome stabiles and standing mobiles of his later years. Part of the exhibition will focus on the artist’s work up until his midcareer retrospective at MoMA in 1943, including the wire sculpture Josephine Baker (III)(c. 1927); A Universe (1934); painted sculptural reliefs, works on paper, and rarely seen motorized works, all from the 1930s; a group of Constellation sculptures from the 1940s; and a selection of jewelry made by Calder for his family and
friends.

Drawn from MoMA’s archives, photographs and correspondence between the artist and various collaborators, such as Alfred H. Barr Jr. and James Johnson Sweeney, will illuminate Calder’s close relationship with the Museum. The other section of the exhibition will trace the development of Calder’s practice after his 1943 retrospective at MoMA and will include the hanging mobile Snow Flurry, I (1948) from MoMA’s collection, along with a digitized film of Calder at work by Swiss artist Herbert Matter from 1950, and a selection of large-scale sculptures. Modern from the Start will be a celebration of Calder’s work, while also presenting new research and scholarship through the gallery presentation and an accompanying catalogue. 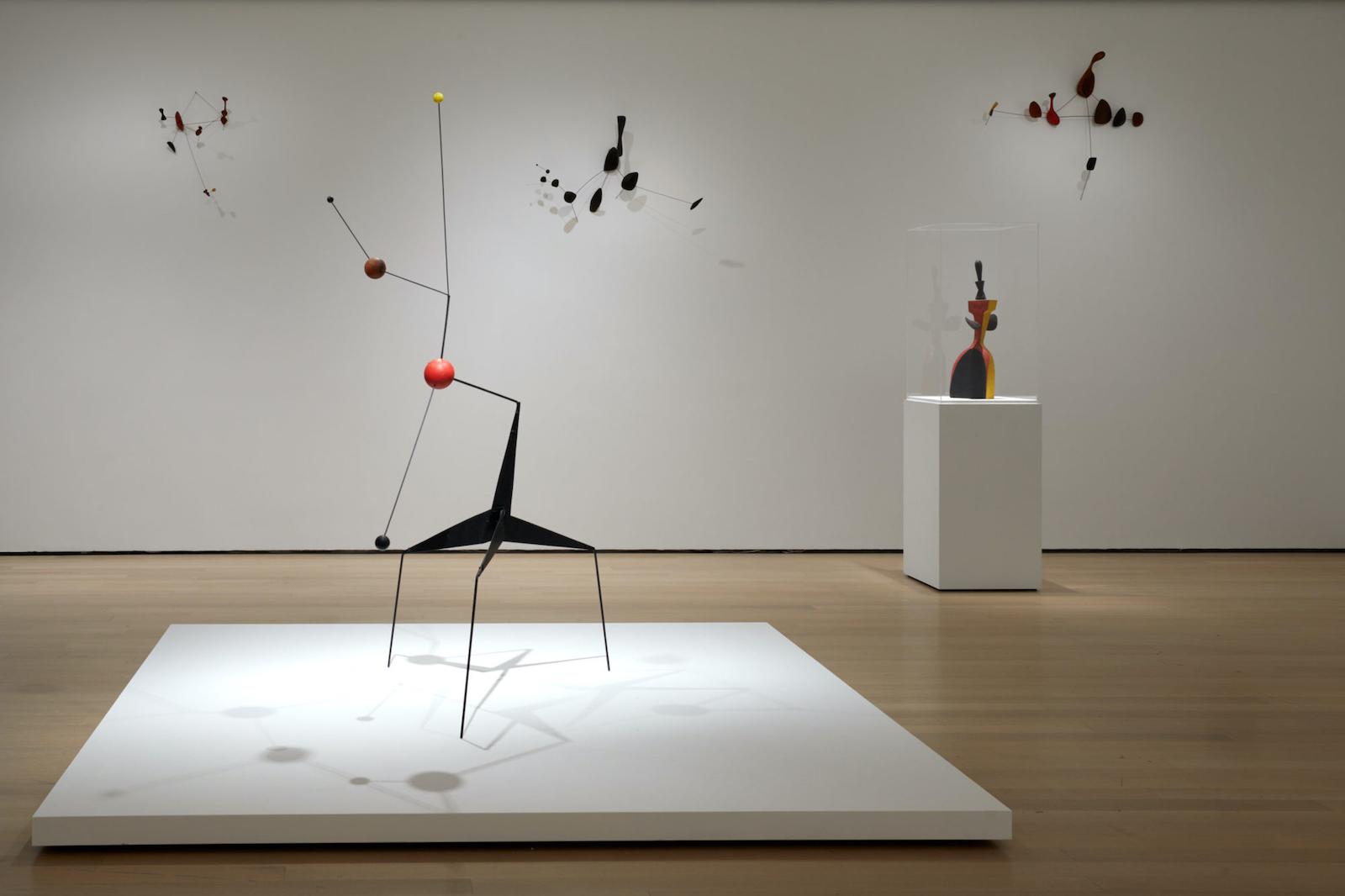 The health, safety, and experience of all visitors remains MoMA’s top priority. The Museum will continue to implement its rigorous health and safety protocols that follow CDC, New York State, and New York City guidelines, including: timed ticketing to ensure capacity remains at or under twenty-five percent, requiring face masks, administering contactless temperature and bag checks, practicing social distancing, and providing contactless hand-sanitizer dispensers throughout the Museum and plexiglass barriers at all desks. For more information on our safety protocols, please visit MoMA's Visitor Tips webpage.

Leadership support for the exhibition is provided by the Kate W. Cassidy Foundation.

Generous funding is provided by the Alice L. Walton Foundation, Jeanne and Bob Savitt, Robert F. Shapiro, Jr., The International Council of The Museum of Modern Art, and the Jon and Mary Shirley Foundation.

Additional support is provided by The Lipman Family Foundation, Inc.

Leadership contributions to the Annual Exhibition Fund, in support of the Museum’s collection and collection exhibitions, are generously provided by Jerry I. Speyer and Katherine G. Farley, the Sandra and Tony Tamer Exhibition Fund, The Contemporary Arts Council of The Museum of Modern Art, Eva and Glenn Dubin, Alice and Tom Tisch, Mimi Haas, the Noel and Harriette Levine Endowment, The David Rockefeller Council, the William Randolph Hearst Endowment Fund, the Marella and Giovanni Agnelli Fund for Exhibitions, Anne Dias, Kathy and Richard S. Fuld, Jr., Kenneth C. Griffin, The International Council of The Museum of Modern Art, Marie-Josée and Henry R. Kravis, and Jo Carole and Ronald S. Lauder.

Major contributions to the Annual Exhibition Fund are provided by The Junior Associates of The Museum of Modern Art, Emily Rauh Pulitzer, Brett, and Daniel Sundheim, the Terra Foundation for American Art, Karen and Gary Winnick, and Anna Marie and Robert F. Shapiro.