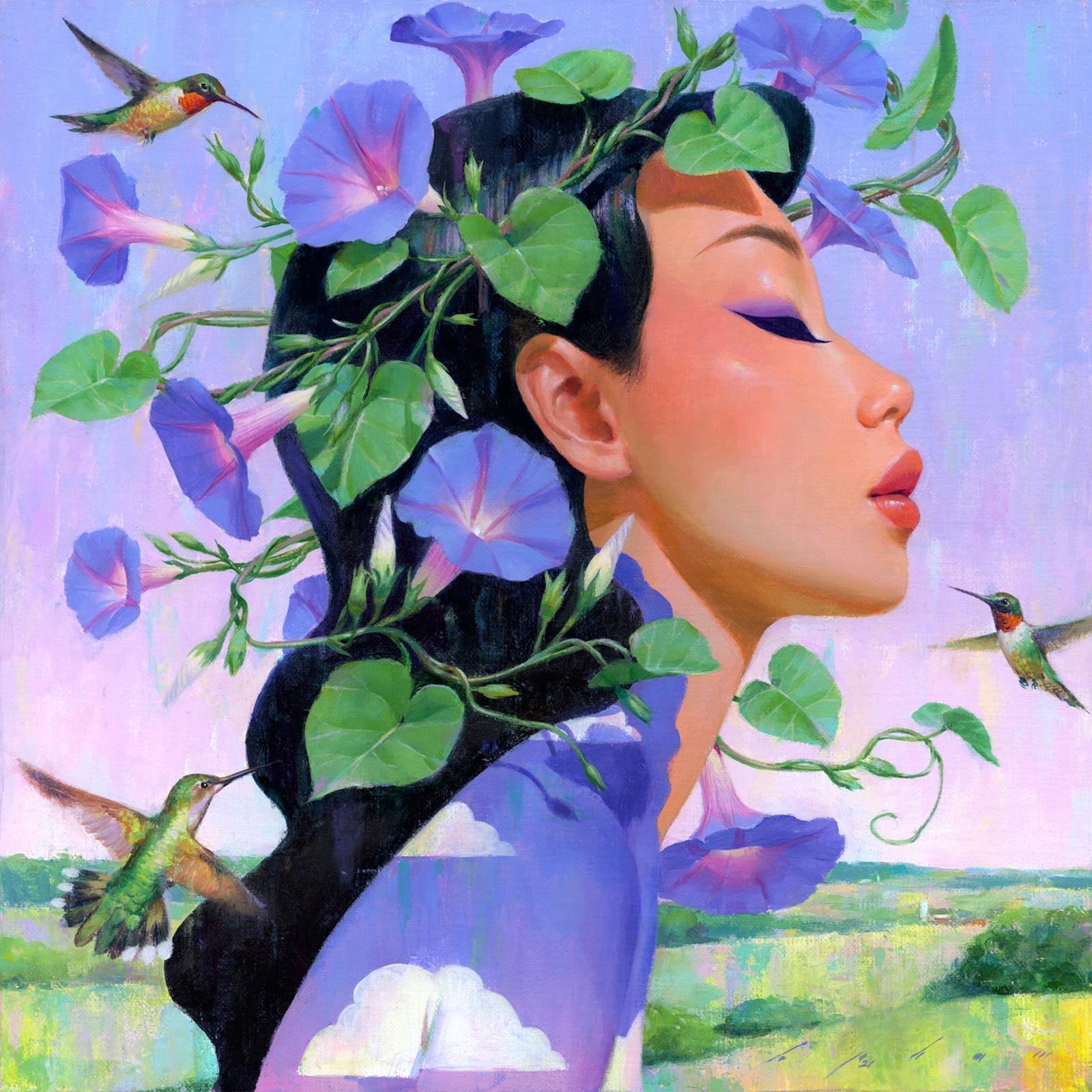 Redd Walitzki utilizes a cutting-edge technique that combines oil painting and mixed media on laser-cut panels and takes inspiration from the Pacific Northwest's lush rainforests and the ornate Baroque ornamentation of Bavaria to create pieces that commemorate a moth’s four-week-long lifespan. The vivid muses are often painted in fashionable garb and glamourous settings that are a façade, hiding underlying themes of ecological destruction.

Walitzki’s newest series, The Days of Miracle and Wonder implores the viewer to embark on a journey to a lost time of myth and transformation. When Redd began this series, they were on a journey around the globe, drinking in a myriad of experiences while slipping from one country to the next. Versailles's opulent halls, the misty harbors of Vietnam, and the golden coastline of the Canary Islands all became woven together into a rich tapestry of inspiration. Locked down during the pandemic, these experiences became a well of hope to draw upon as they painted colorful works of daydream and escape.

Redd shares, “During this strange period in history where it feels like our world is shrinking, these works embrace moments in the past filled with exploration, mystery, and wonder. As nymphs transform into coral and lantern-lit boats drift by moonlight, the paintings lure us into the undiscovered spaces over the edge of the map. This series is a mixture of both wistful nostalgia for a lost time of myth and adventure and the sense that such wonders could bloom again.”

Bao Pham’s art is instantly recognizable for his soft, precise, and colorful portraits of wistful and melancholic figures set in lush natural settings. He incorporates eastern elements and designs using traditional western techniques with a touch of the surreal.

Pham’s newest series, Summer Hues, is a direct continuation of his 2019 series entitled, The Rain which focused on the feelings of joy and sadness that come with a spring shower. Regarding his newest series, Pham shares, “During a time of isolation, I found myself looking to the outdoors, reminiscing about a lost summer. Figures are seen basking in the sun-drenched landscape, tangling among a mixture of blooming flowers and birds of the mid-west. Time seems to slow down enough for them to soak up the warmth and colors of summer.” 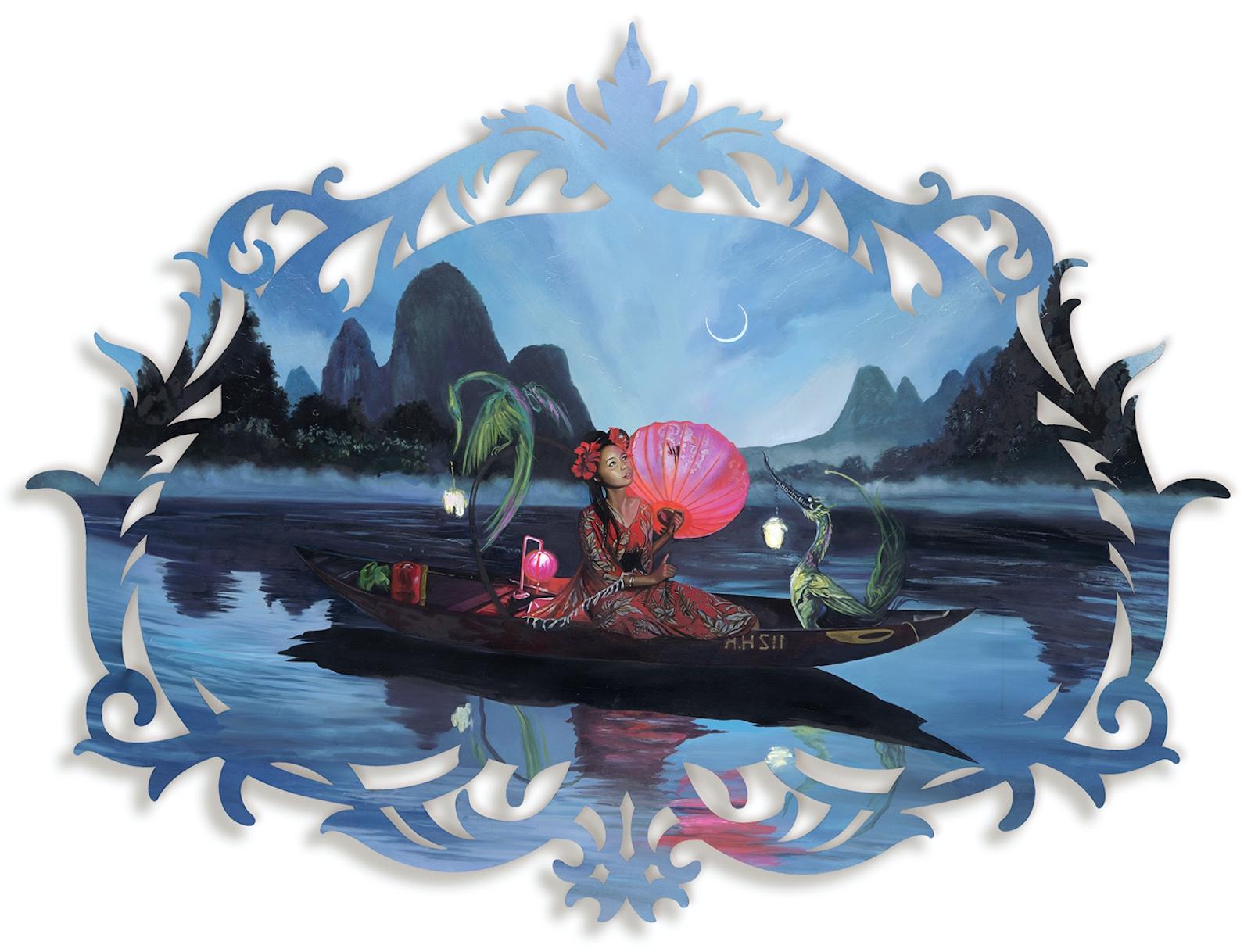 The Days of Miracle and Wonder from Redd Walitzki and Summer Hues from Bao Pham premiere Saturday, April 10 in Gallery 2 alongside the Fifteen-Year Anniversary Group Exhibition in the Main Gallery.

The gallery has resumed partial visiting hours. In accordance with LA County Public Health restrictions, maximum occupancy is restricted to twelve people at a time, mask-wearing and social distancing are mandatory. In accordance with CDC guidelines, guest temperatures will be checked using an infrared scanner upon entry.

Redd Walitzki is a leading New-Contemporary artist, born in Germany and currently based in the US. Androgynous and elaborate, Walitzki's pieces are a marker of life, commemorating a moth’s four-week-long flutter in the same celebratory way they do a human being’s ninety-year journey. Much of their work is inspired by the lush rainforests of the Pacific Northwest and the ornate Baroque ornamentation of their native Bavaria. The vivid muses in their paintings are influenced by the glamour of high fashion, but Walitzki’s works also often explore the darker side of human impact on ecology. Walitzki completed a B.F.A. from Cornish College of the Arts with a concentration in painting. Their art has been featured in galleries on both coasts of the U.S. and Internationally, as well as in various publications including Beautiful Bizarre Magazine and American Art Collector. Walitzki's work is created through a cutting-edge technique which combines oil painting and mixed media on laser-cut panel. The process starts with a watercolor underpainting to begin the composition & texture, which is transferred to the panel on rice paper and then laser cut. Each piece is completed with many layers of oil glazes for depth and detail.

Iowa-based Vietnamese painter and illustrator Bao Pham’s art is instantly recognizable for his soft, precise, and colorful portraits of wistful and melancholic figures set in lush natural settings. He incorporates eastern elements and designs using traditional western techniques with a touch of the surreal. After working as a digital illustrator for many years, Pham found a new direction working with a variety of traditional media. He hopes to create work that speaks to his heritage and the environment that he lives in.

Corey Helford Gallery (CHG) was first established in 2006 by Jan Corey Helford and her husband, television producer and creator, Bruce Helford (The Conners, Anger Management, The Drew Carey Show, George Lopez) and has since evolved into one of the premier galleries of New Contemporary art. Its goals as an institution are the support and growth of young and emerging, to well-known and internationally established artists. CHG represents a diverse collection of international artists, primarily influenced by today's pop culture and collectively encompassing style genres such as New Figurative Art, Pop Surrealism, Neo Pop, Graffiti and Street Art. CHG is located in Downtown Los Angeles in a robust 12,000 square foot building presenting new exhibitions approximately every six weeks. For more info and an upcoming exhibition schedule, visit the gallery website and connect on Facebook, Twitter, Instagram, and YouTube.