Bringing the Palazzo Pitti Back to Life 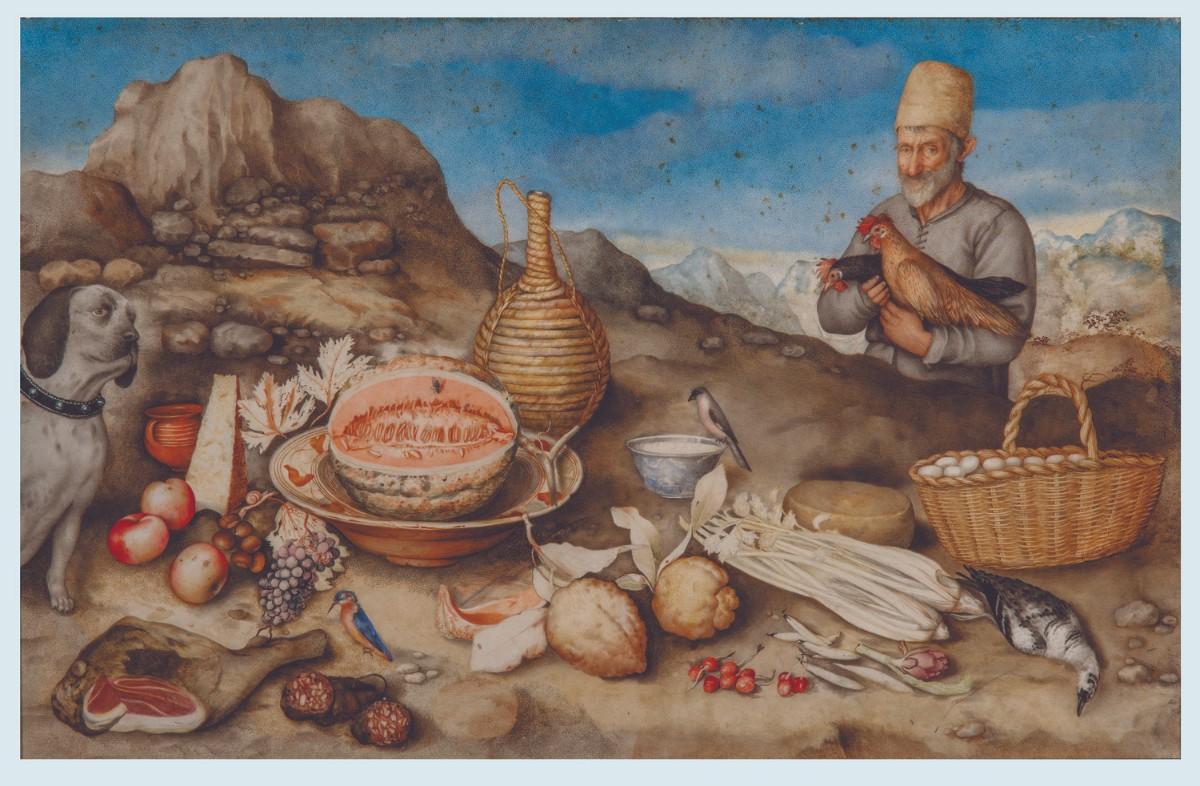 Flowers, plants and exotic shells, bizarre insects and animals with expressions bordering on the human: the forms and the poetry of nature take pride of place in the exhibition entitled The Immensity of the Universe in the art of Giovanna Garzoni hosted in the Andito degli Angiolini from May 28 to June 28.

With this substantial retrospective (the first large monographic exhibition devoted to the Baroque female painter from the Marche) the Gallerie degli Uffizi was planning to celebrate a major female figure to mark Women's Day on March 8, 2020. "Hibernated" by the lockdown, however, the exhibition has now become a symbol of the return to normal life after the closure of Palazzo Pitti for almost three months due to the COVID-19 pandemic. 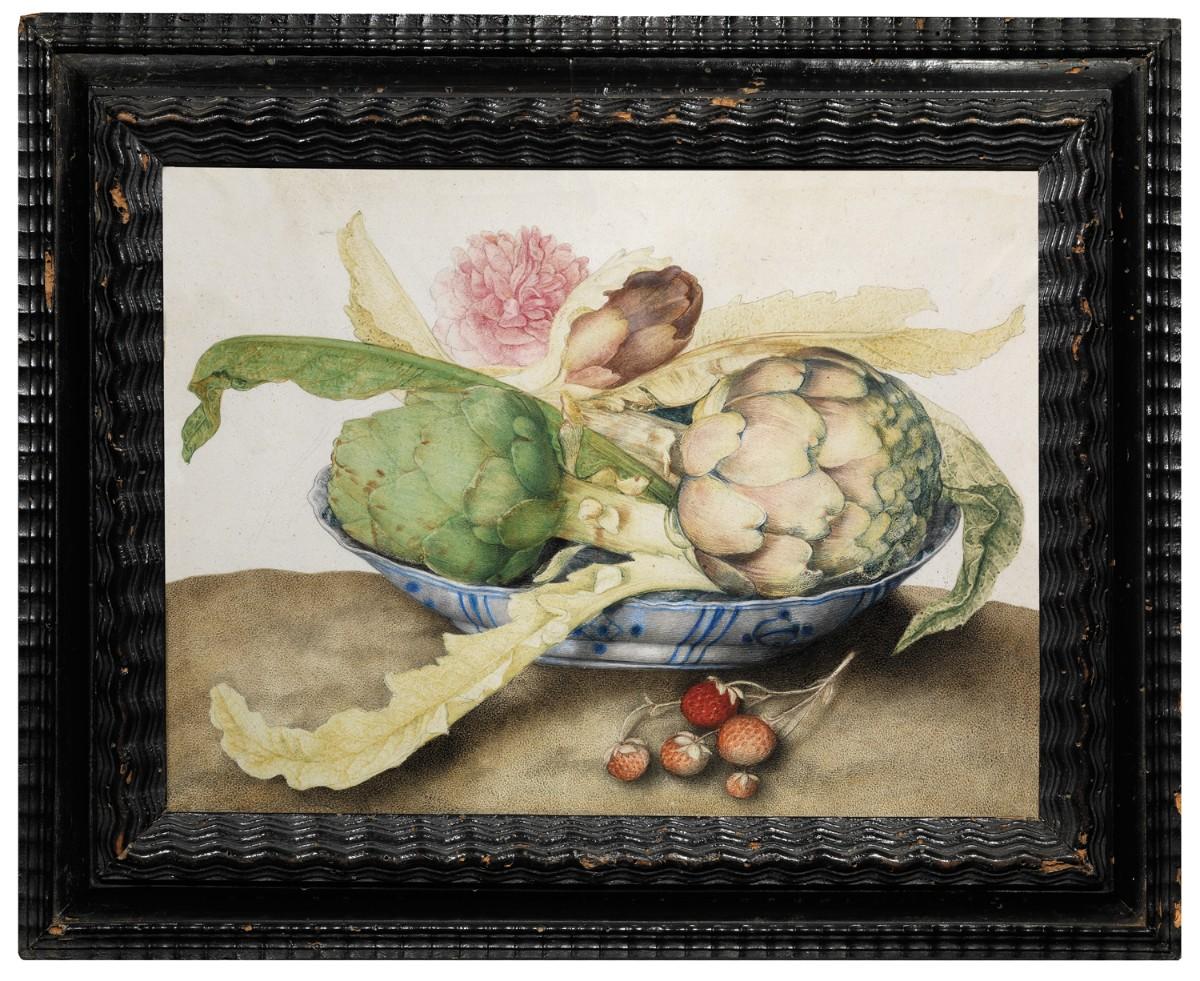 The exhibition comprises roughly a hundred paintings, illuminations on parchment (Garzoni's favorite support), and drawings, in addition to a large floral altar fontral over four meters in length, accompanied by and interacting with period porcelain, ivory pieces, and Renaissance bronzes. Imaginative and inquisitive by nature, Garzoni, who was born in Ascoli Piceno in c. 1600, considerably expanded her stylistic vocabulary thanks to the remarkable penchant for travel that made her one of the most cultivated and cosmopolitan women painters of her age.

She lived at the courts of Venice and Turin, spent several years with the Medici in Florence, worked in Naples and in France, where she painted a portrait of Cardinal Richelieu (on display in the exhibition), and even frequented the court of King Charles I in England, a fact borne out by documents on show in this exhibition for the very first time. She was a friend of Artemisia Gentileschi, that other great woman artist of the 17th century, with whom she shared both travel and experiences and who was something of a role model for her in that she was a few years Giovanna's senior. Shrewd in currying favor with her patrons, Garzoni specialized in miniatures on parchment, excelling in particular in the depiction of still-lifes with exotic curios and subjects taken from the plant and animal world. 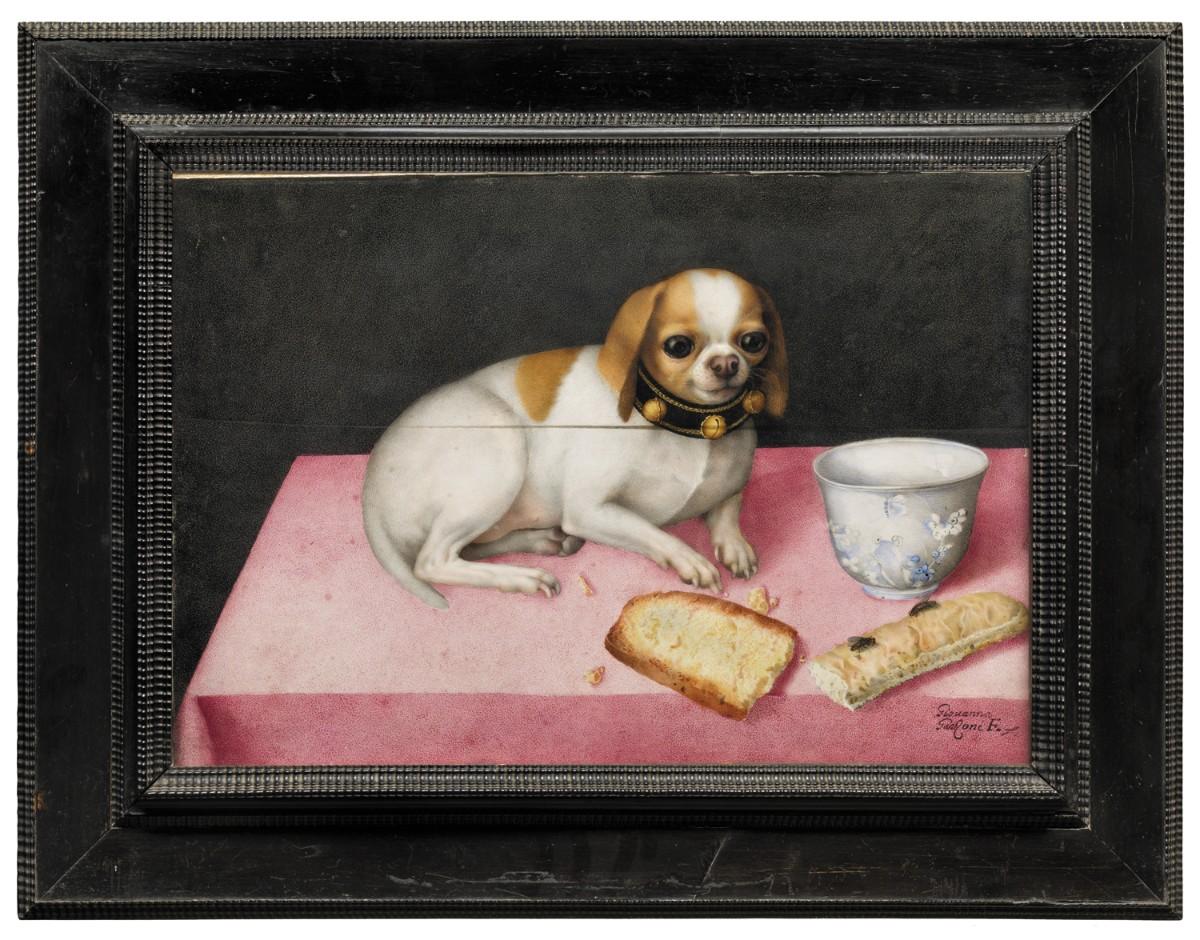 A leading player in the cultural affairs of her age, she rapidly built a reputation for herself and was admired throughout Europe, to the point where she was even portrayed in her old age by Carlo Maratta, the prince of Rome's Accademia di San Luca and future restorer of Raphael's masterpieces. Giovanna Garzoni was endowed with astonishing intellectual inquisitiveness and originality, which translated into penetrating and stringent observation of the natural world. The vast corpus of her work owned by the Gabinetto Stampe e Disegni degli Uffizi is supplemented in the exhibition by a series of loans from private collections and from Italian and foreign museums illustrating the full creative spectrum of her career. 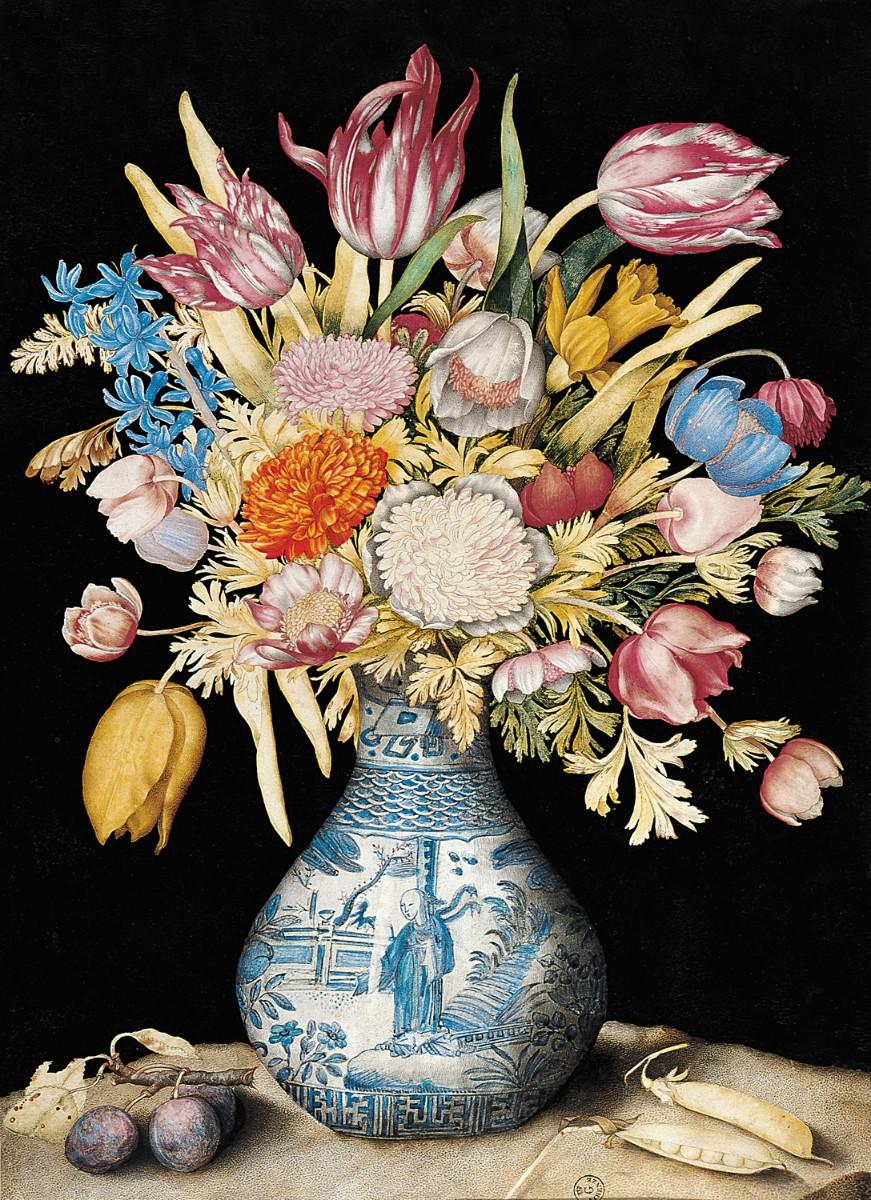 Of particular interest are her precious floral miniatures with vases in the Chinese style and shells from tropical countries and her still "yet living" lifes with fruit, exotic plants and small animals of all kinds (from insects depicted in their infinite variety to snails, birds, and crickets) alongside the exhibition's iconic work, her celebrated English Small Dog portrayed on a table with a Chinese cup and some biscuits. But Garzoni also expressed her uniquely creative talent in the way she juxtaposed objects and human figures, for instance in the Old Man of Artimino surrounded by the produce of his labors as a farmer (sausages, fruit, eggs, and cheeses) and by his farm animals (chickens and a dog). Equally striking is Garzoni's Self-portrait as a young girl in the guise of the god Apollo, which she painted when barely twenty years old, and her unusual miniature of the Ethiopian Prince Zaga Christ, whom she portrayed while at the Court of the House of Savoy in Turin. And finally, the exhibition could hardly have avoided paying tribute to Raphael (as the Scuderie del Quirinale in Rome hosts a major exhibition to mark the 500th anniversary of his death) in the shape of a miniature copy, painted by Garzoni in 1649, of the Madonna della Seggiola which was already a showpiece of the Medici collections in her day and which still hangs in the Galleria Palatina di Palazzo Pitti to this day.

Gallerie degli Uffizi Director Eike Schmidt: “Giovanna Garzoni was a woman who often found herself working and painting with and for other women, and these sisterly episodes contributed in part – but always in a positive vein – to her choices and to the results she obtained with her work. But aside from that, Garzoni managed single-handedly, by her own strength and intelligence and by adopting a shrewd policy of self-promotion and astute flexibility in moving about the Italian and European courts of her day, to assert herself and to create an original and deeply poetic style even in the still-life genre then in its infancy. Recent scholarship and new discoveries meant that the time was ripe for this year's monographic exhibition, which explores the artist's output throughout her artistic career. In this case the exhibition does not focus exclusively on her still-lifes but also includes other works and objects conjuring up those depicted in her paintings, where her vibrant painterly style breathes eternal life into her subjects, be they the elegant figures in her portraits or the wonders of nature. This year's events have meant that it is precisely Garzoni's art that marks the rebirth of the Grand Dukes' palace after a long moment of darkness and silence”. 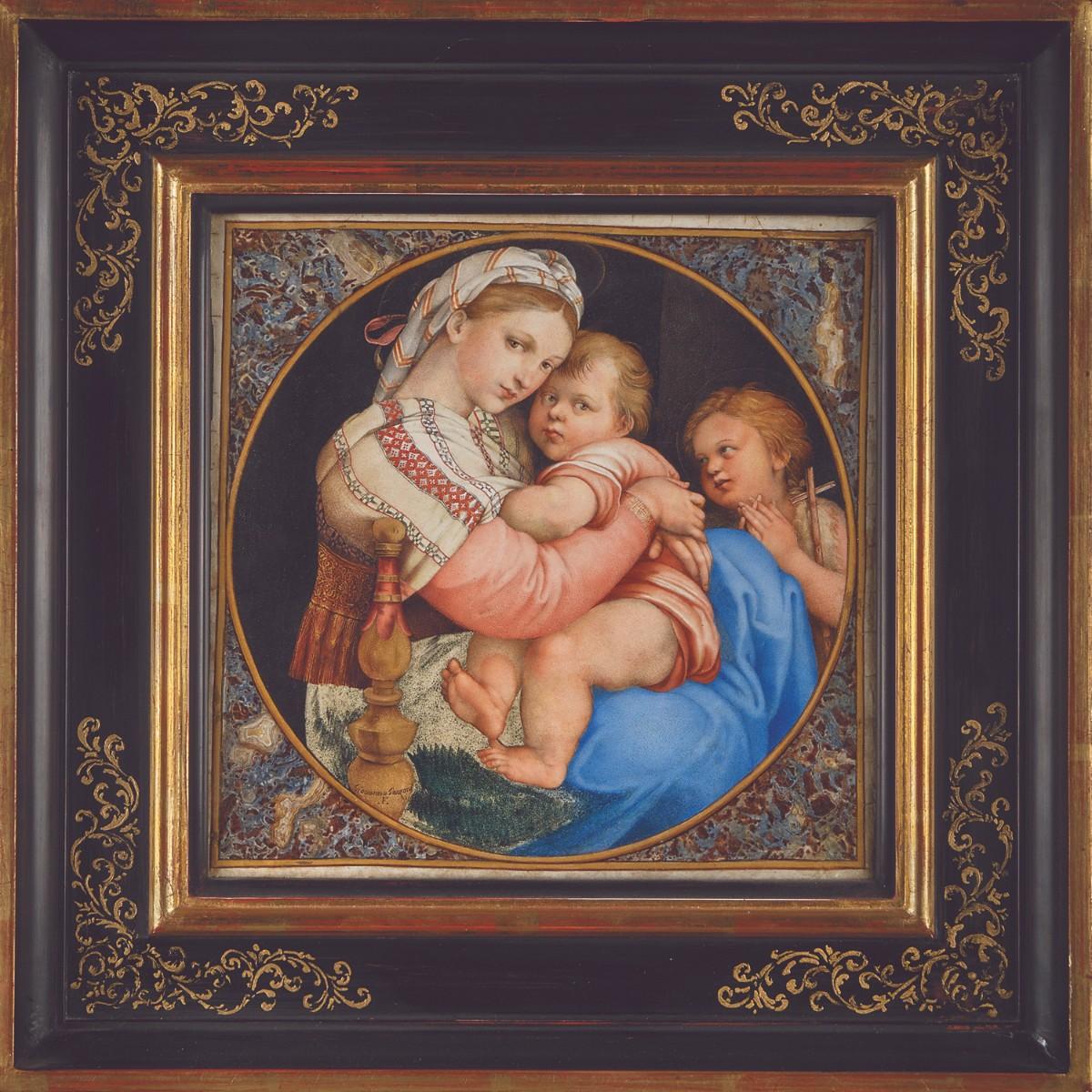 Exhibition curator Sheila Barker: “The aim of this exhibition is to showcase Garzoni's astonishing geographical breadth and scope while also illustrating her breathtakingly penetrating artistic vision. Her starting point is always the heart, the fulcrum of people and things, which she then subjects to almost microscopic analysis. In particular, Garzoni focuses her attention on the exotic items in her patrons' collections, organizing them in compositions that speak of the growing cosmopolitanism in the life of Europe's courts and the intense circulation of goods throughout the world in this particular historical moment when the globalization process was taking its first steps”.

The exhibition also plays a leading role in an initiative developed by Advancing Women Artists (Awa), which has chosen it to launch a worldwide challenge to artists and institutions to produce new creations inspired precisely by the art of Giovanna Garzoni.

“In creating a challenge dedicated to this exhibition, we hope that the exhibition itself may become a cultural bridge between people of different countries – remarked Awa Director Linda Falcone – We hope that contemporary artists join in this global conversation on art and that through their work they let us know the extent to which Garzoni's achievements colour their creativity today”.

The exhibition is curated by Sheila Barker in conjunction with the Medici Archives Project; the catalogue is published by Sillabe; the English edition was made possible thanks to a contribution from Awa.