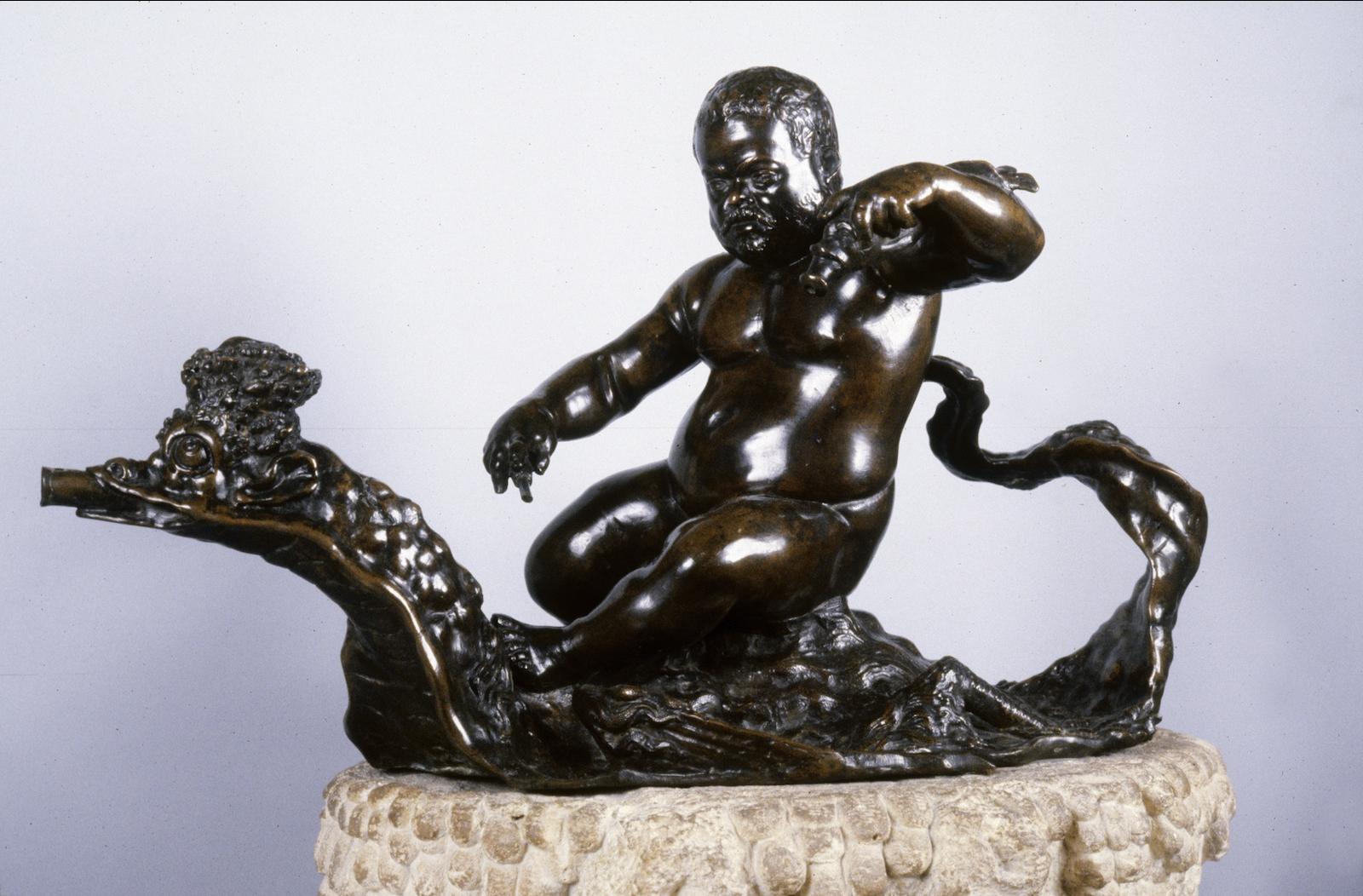 Giambologna, The Dwarf Morgante Riding on a Dragon, 18th Century.

Associating Renaissance art with ideals of harmony and order is only half of the story. High Renaissance art was enormously indebted to the writings of the natural philosopher Pliny. His Naturalis Historia documented nature in all its facets, including its wonders and what was outside the realm of harmony and order. Translated in Christian terms, natural wonders were testimony to God’s ingenuity and wisdom. Pliny’s writings include observations of what is referred to as aberrations of the human race, which he framed as nature’s “source of amusement for herself and a source of wonder to us.”

Renaissance art caught on to that and, in sixteenth-century Florence, the attention and art devoted to a court attendant named Braccio di Bartolo, a man with dwarfism, is a testimony to that tendency. Bartolo—known better as Morgante—was the sharp and quick-witted “buffoon” of Cosimo I’s court (1537 to 1569). In 1555, Cosimo I granted Morgante a ducal privilege in which he is defined as “our most beloved servant.”

People with dwarfism had become de rigueur in courts in the fifteenth century as part of a ruler’s entourage and had a special place in the court’s pageantry and protocol, where predominating rhetoric was one of “recreation, delight, pleasure.” Morgante was treated as a prized associate but he—and others like him—were also seen as oddities that provoke delight in court. Artists had the tendency to depict Morgante in a heroic stance, either astride an animal or in full heroic nudity. While those portrayals did set Morgante apart from other courtiers, the underlying parodistic intent is certainly immoral by modern standards. 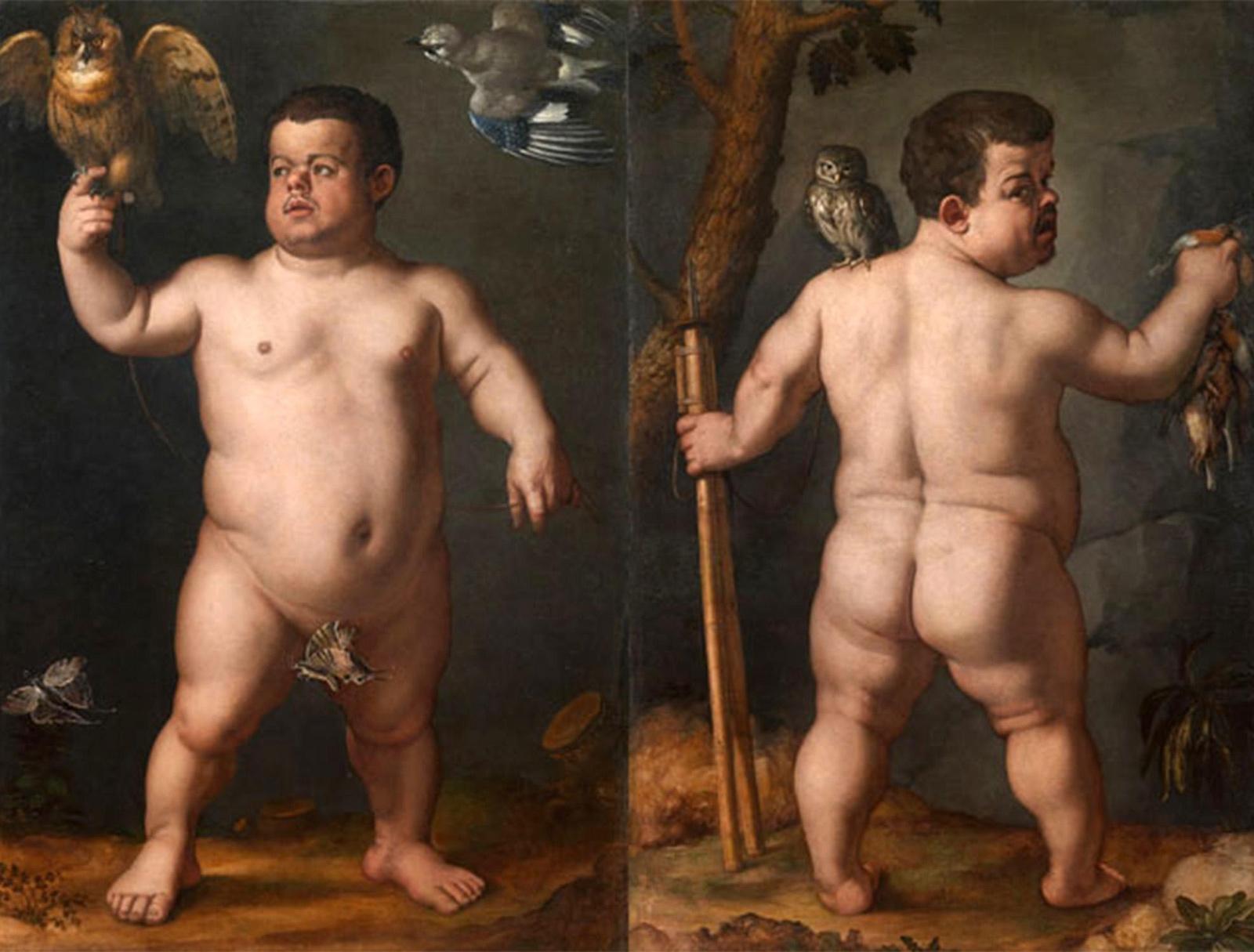 Though he did appear in group paintings on numerous instances starting in the late 1400s, Morgante got a series of individual full-figure portraits and statues.

In 1550, Bronzino completed a full-figure portrait of Morgante in the nude, casting him as a fowler. To be more precise, it was a double portrait, as one version portrays him from the front, another from the rear. Attributes of Morgante here are the butterfly and the pygmy owl, both symbolizing the fact that he was a jester or “fool” in the court. The butterfly, for instance, appeared in the tarot card depicting the fool, while the pygmy owl, with its diminutive size, underscored Morgante’s condition.

This double portrait, while seemingly making fun of Morgante’s appearance, does have a serious programmatic intent, though: it inserts itself into the paragone debate, a discussion on what art form, between painting and sculpture, was the superior one. By painting a double-sided portrait, recto and verso, Bronzino thought he could demonstrate the superiority of painting over sculpture. “Because Bronzino’s portrait is in a monumental and formal format, the sitter must have been cherished as well; it is none other than the dwarf Morgante [sic],” wrote art historian Gabriela Jasin in the book A Scarlet Renaissance.

Restoration work from the 1800s adorned Morgante with vines, grapes, and wine, and turned him into Bacchus. His full nudity was considered more appropriate for a mythological character than a court jester. 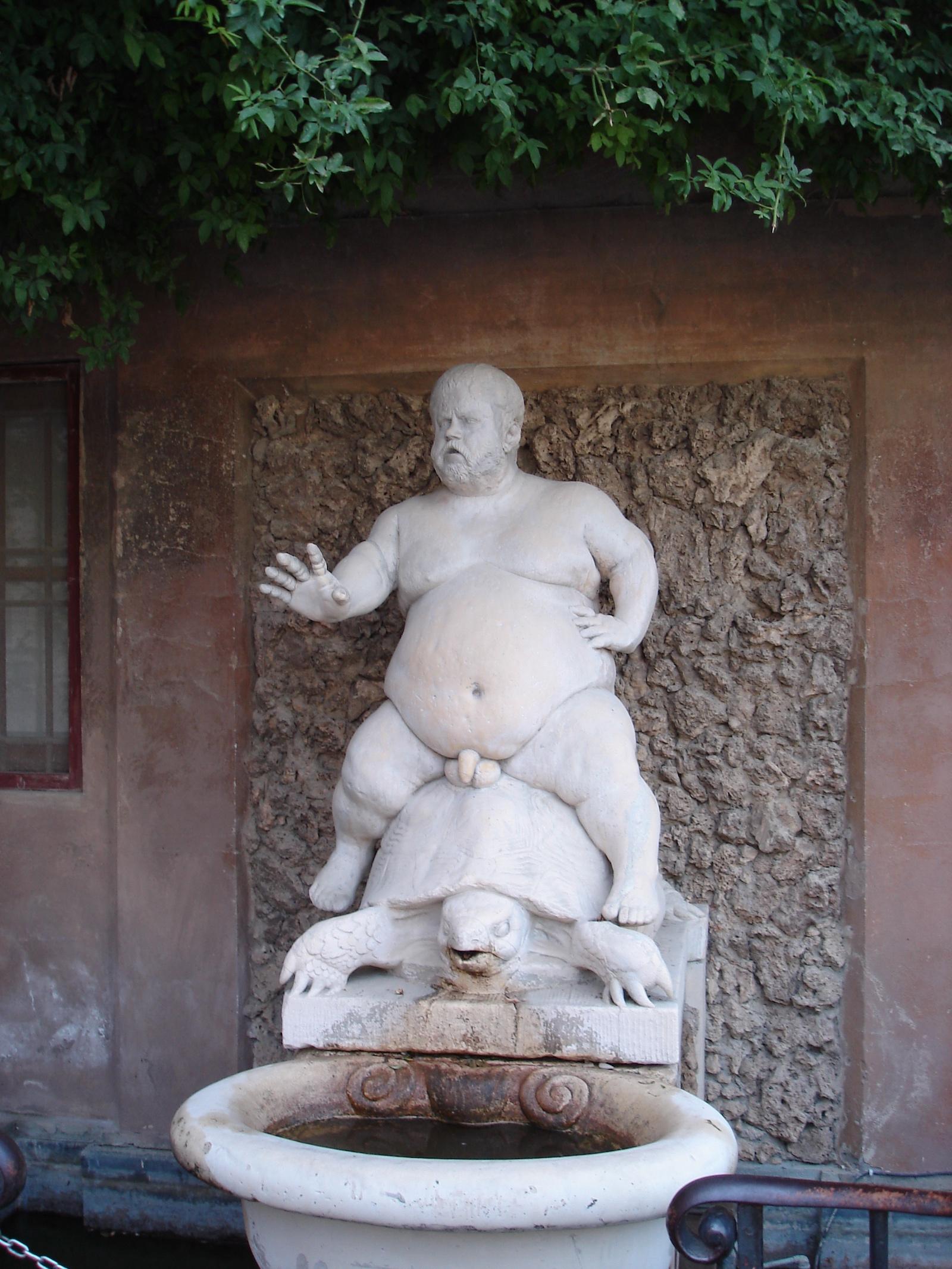 Morgante of the court of Cosimo I de' Medici. Bacchus fountain in the Boboli gardens, Firenze, Italy.

In 1560, sculptor Valerio Cioli sculpted Morgante astride a tortoise. In this portrait, Morgante displayed a beard styled in the guise of Roman emperors, and his hand is stretched out in a grandiloquent gesture. Sixteenth-century art historian and biographer Giorgio Vasari praised this work, saying it “is so beautiful and so similar to the successful truth that perhaps there has never been seen another monster so well made and constructed with such diligence similar to nature and to reality.” These words, while still problematic, are less harsh than they seem, as the latin word monstrum, which yielded the Italian mostro, was a value-neutral word indicating something wondrous.

In 1579, the statue was turned into a fountain, and the tortoise’s mouth served as a spout. To this day, this fountain, which is at the entrance of the Boboli Gardens, is known as Bacchino, or “little Bacchus,” as conflating Morgante with Bacchus had become commonplace up to the 19th century.

In the 1580s, Morgante was again represented, and again nude, this time in bronze statuettes designed by Giambologna for Cosimo’s ducal heir, Francesco I de’ Medici. In one, he is standing upright, blowing a wind instrument. In the other, he is shown astride a dragon, and this sculpture was intended as a fountain ornament for Francesco’s rooftop “hanging garden.” In it, Morgante holds the remnants of a fishing rod in one hand and a fish in the other, whose mouth functioned as a spout.

One does not need to have a degree in sociology to see that these portraits do not align with modern-day values. “To our eyes, the dwarf has been made to suffer indignity that borders on the malicious, but for Renaissance artists and their princely patrons, this was fair game,” wrote Robin O’Bryan in the 2012 volume of Preternature: Critical and Historical Studies on the Preternatural. As Cicero allowed, “deformity and personal defects are happy enough subjects for ridicule,” which, of course, is a stance that did not age well. Yet, this remains a phenomenon of Florentine Renaissance art.