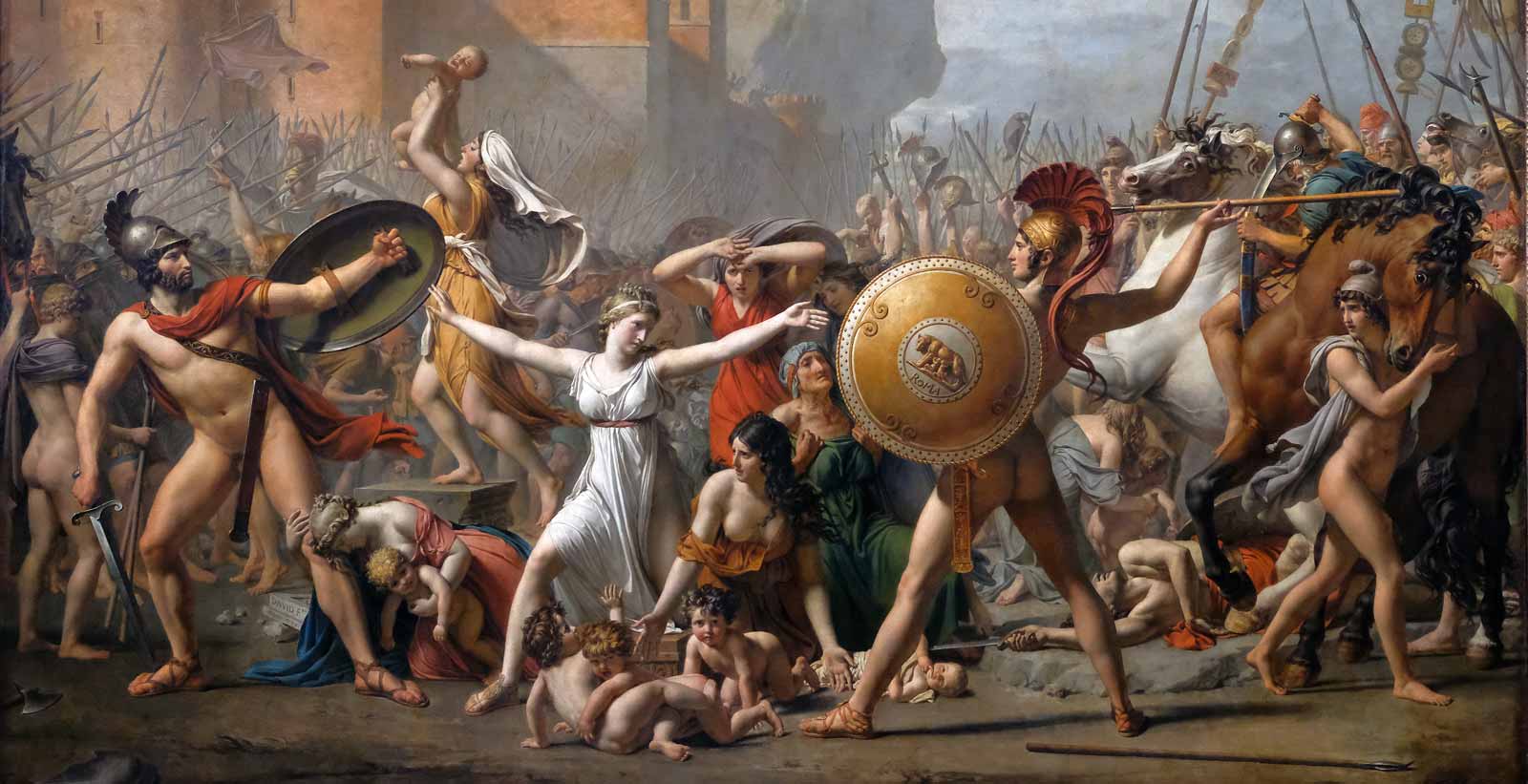 Wikimedia commons
Jacques Louis David, Intervention of the Sabine Women, 1799.
How an idealized visual representation of the male form that originated in Ancient Greece has survived more or less intact until today 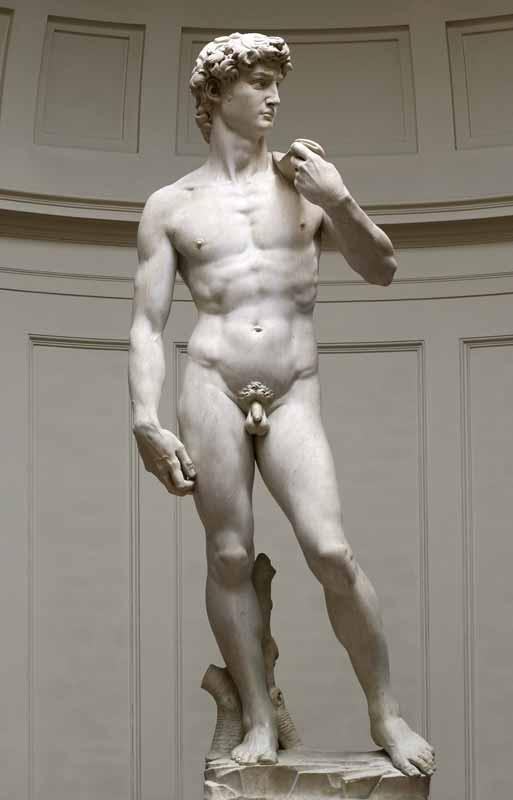 “The pride in the naked body separated the elites from the commoners, men from women, and Greeks from foreigners.”

We have previously explored the way female nudity, mainly thanks to various depictions of the goddess Venus, has been a constant and consistent source of inspiration throughout art history, with codified attributes and poses that were copied, referenced, and subverted through the centuries.

But what about the male nude, which was neglected by mainstream museum exhibitions until the seminal 2012 show Nackte Männer at the Leopold Museum in Vienna and Masculin/Masculin at the Musée d’Orsay in Paris in 2015? 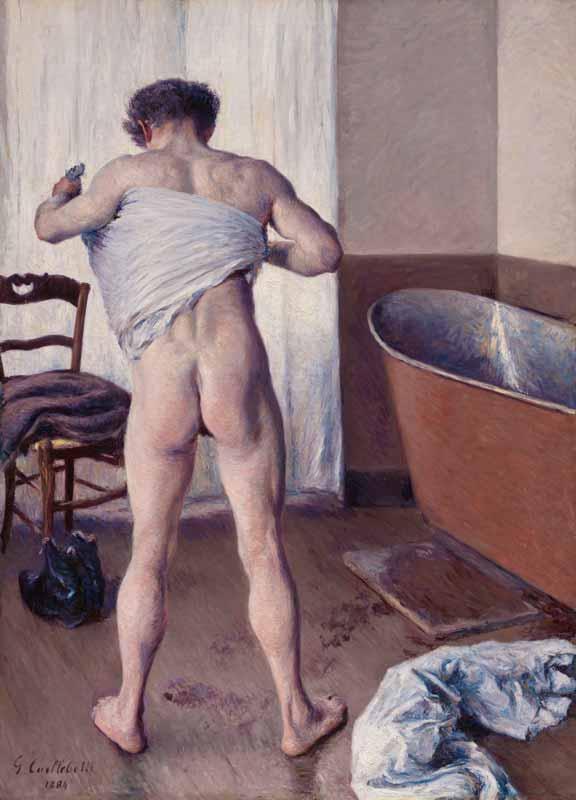 Eighteenth-century German art historian Johann Joachim Winckelmann saw the statue known as Apollo Belvedere, a marble sculpture depicting the god Apollo treading lightly and holding his arms as if he had just shot an arrow, as one of the highest examples of art. “As it is confessedly the beauty of man which is to be conceived under one general idea, so I have noticed that those who are observant of beauty only in women, and are moved little or not at all by the beauty of men, seldom have an impartial, vital, inborn instinct for beauty in art. To such persons the beauty of Greek art will ever seem wanting, because its supreme beauty is rather male than female,” he wrote in a letter quoted by Walter Pater’s The Renaissance.

Winckelmann was extolling the virtues of what we tend to refer to as “heroic” nude, an idealized visual representation of the male form that originated in Ancient Greece and has survived more or less intact until today. “It was fundamental to the Greek ethos, Greek culture, and antiquity,” Patricia Lee Rubin, Renaissance art historian and professor emerita at New York University, told Art & Object. “It then passed on to its Roman adaptations in art and garden sculpture: the idealized male nude has been very important in art, and in people's looking at statues...”

In Ancient Greece, the depiction of the nude male body was associated with specific social practices, such as the gymnasium and the symposium. “The pride in the naked body separated the elites from the commoners, men from women, and Greeks from foreigners. In short, nudity in real life was an important focus for elite male Greek identity,” writes Jill Burke in the book The Italian Renaissance Nude. 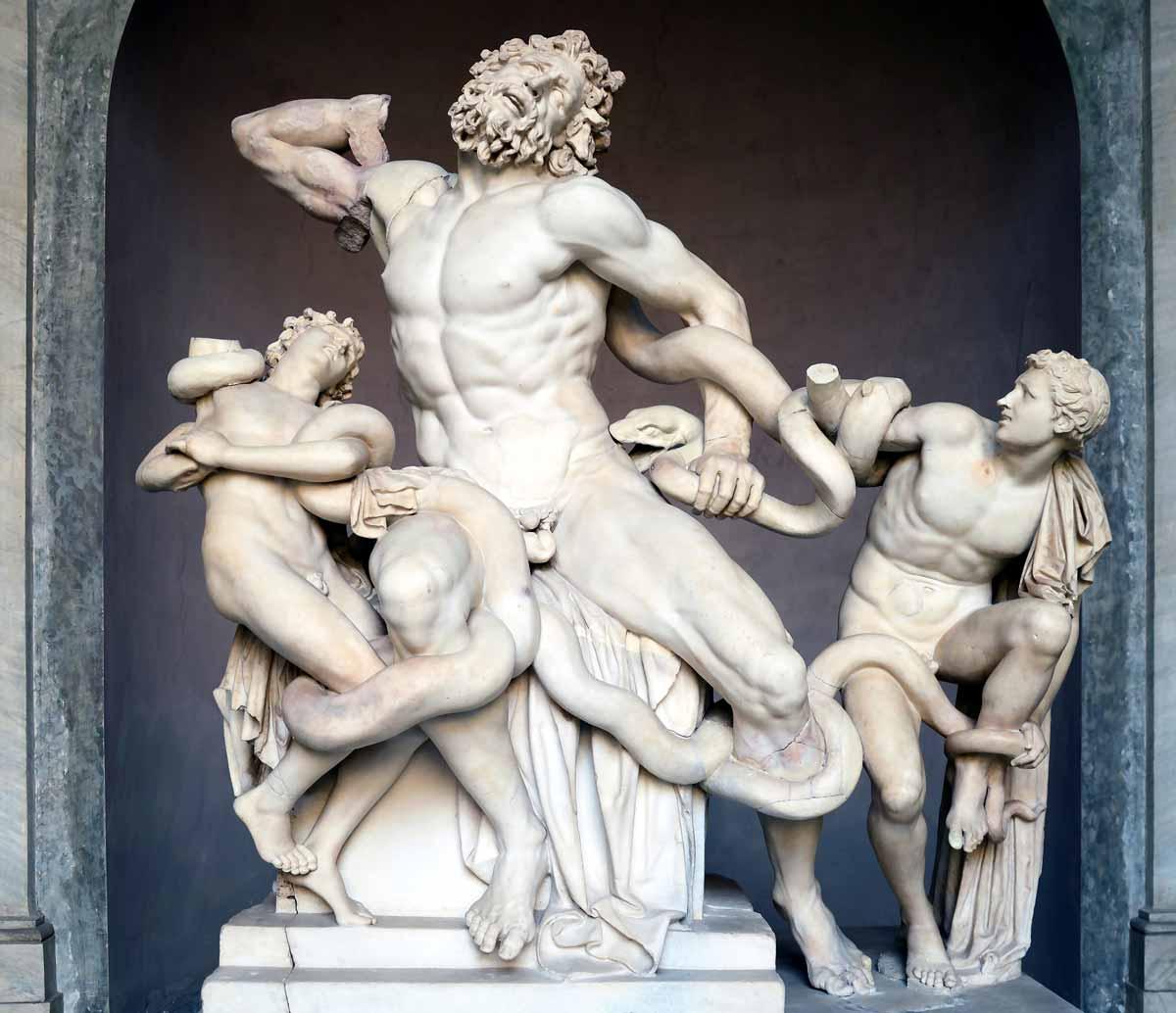 Laocoön and his sons, also known as the Laocoön Group. Marble, copy after a Hellenistic original from c. 200 BCE. Found in the Baths of Trajan, 1506. 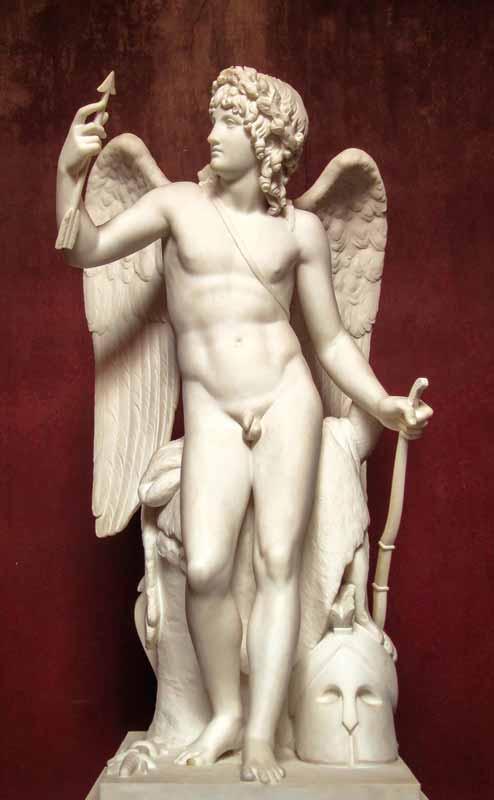 One can’t talk about the male nude without considering their poses … depicting a human figure standing with most of its weight on one leg, with the other leg bent at the knee, which causes a tilt in hips, shoulders, and head.

The heroic nude boils down to three types: the boyish nude, exemplified by the boy lovers of male gods (Ganymede, Hyacinth) and Cupid; slender, athletic men, like the doryphoros, the discobolus, or even the god Apollo; and, eventually, the more muscular “Hercules” a type of physique which was less popular than the other two due to the association of a heavier build with so-called barbaric populations.

While Christianity rejected nudity, the onset of humanism rehabilitated the heroic nude as a representation of mankind as being made in God’s image, especially in times of societal and historical upheaval.

“The creation of the heroic nude by artists from the 1490s to 1520s was set against the backdrop of the Italian peninsula’s constant invasion by foreign powers, which involved the frequent sack of cities, directly affecting thousands of civilians,” writes Jill Burke in The Italian Renaissance Nude. “The beautiful burnished bodies created by Michelangelo, Titian, Raphael, and others were viewed by a population that had witnessed dismemberment, rape, and mass murder, their own bodies subject to repeated bouts of plague, smallpox, and other infectious diseases.” The idealized male nude was pitted against a fragmented, difficult, messy reality. “The nude in its classic formulation is fundamentally a comforting and conservative form, suggesting the possibility of possessing (in one way or another) a perfected body not prone to aging, disease, or death." 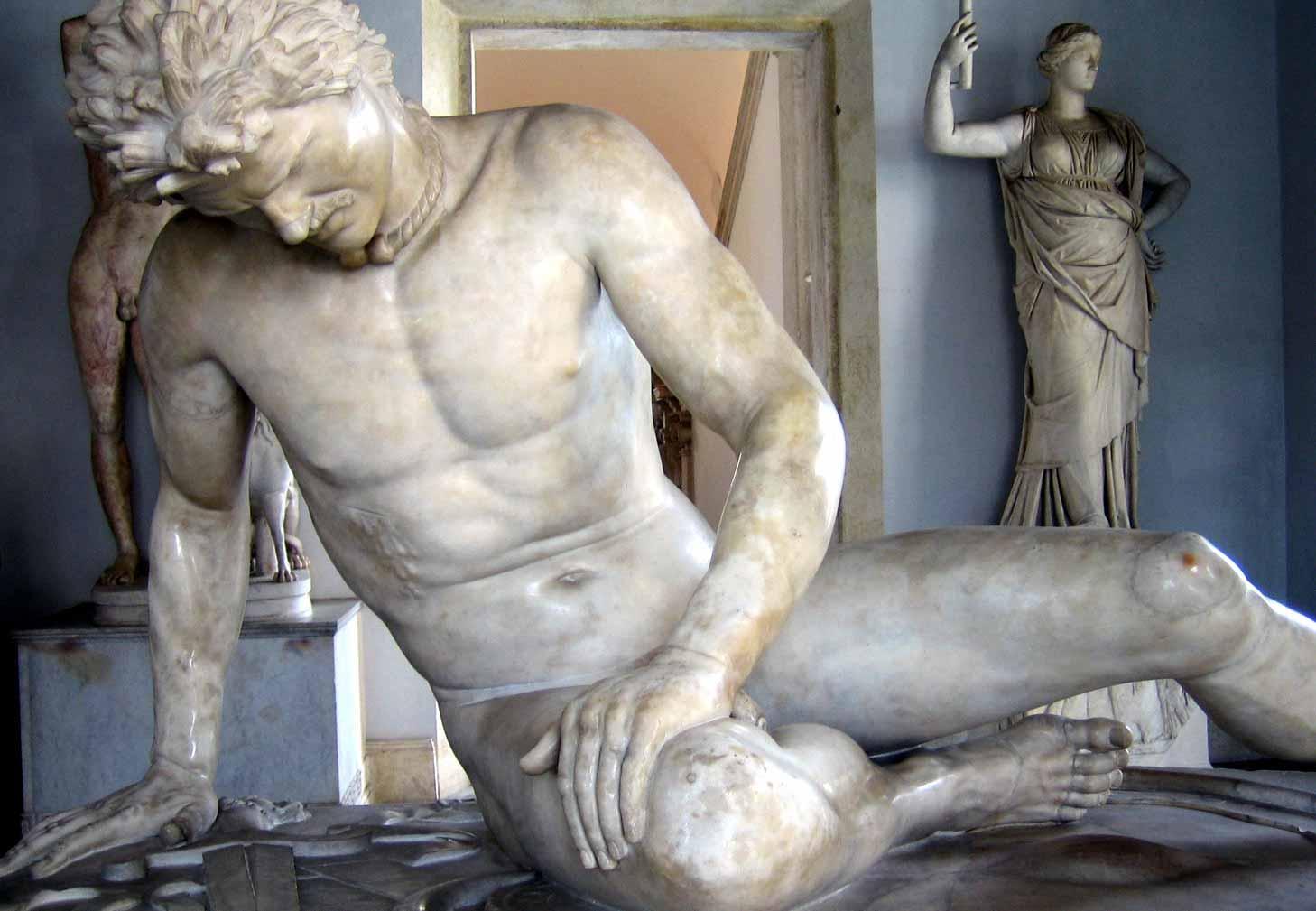 While all of the three types of physique were represented in the Renaissance and the following centuries, the obsession with boyish youth reached a peak in the neoclassical age, where the more “ephebic” type of heroic nude was a favorite of artists: shepherds, young mortals, and Ganymede, the cupbearer of the gods, were seen as an emblem of unblemished, adolescent beauty. For instance, danish sculptor Bertel Thorvaldsen experimented with different representations of Ganymede. Likewise, Cupid, another youth, exerted a similar fascination with artists of that era, most notably Antonio Canova, because his wings were an artistic challenge that allowed artists to showcase their technical prowess.

One can’t talk about the male nude without considering their poses. The best known is the contrapposto. Translating as “counterpoise,” it consists of depicting a human figure standing with most of its weight on one leg, with the other leg bent at the knee, which causes a tilt in hips, shoulders, and head.

“There is a functional aspect to putting hand on hip. In representation as in reality, it can balance or counterbalance a heavy load.” -Patricia Lee Rubin

Pioneered by the Greeks in the fifth century BCE, it evolved during the Hellenistic era to include a visible movement in the torso. Michelangelo brought the contrapposto to its zenith, moving the different muscle masses on different axes. His David, while more static than his other nudes, is a famous example of this, and, in all, his work influenced baroque sculptors such as Bernini, who would also include torsion and twist in his nudes.

What’s more, from the Renaissance onwards, it is common to see a heroic nude in an “arm akimbo” pose coupled with the bodyweight resting on the opposite leg. This, in Rubin’s words, exemplifies “an enduring iconographic association of the angled elbow with manly vigor, fearless self-possession, and even defiance.” Both of Donatello’s representations of David, the first, in marble, dated 1409-1409 and the second in bronze, dated 1435-40, display this pose, which, coupled with the statues’ distinctive boyish charm, signifies the defiance of David, the Israelites, and the Florentines against their seemingly overpowering tyrants. Benvenuto Cellini’s Apollo and Hyacinth has the god posed with arm akimbo. It was not only the pose of mythological, or biblical heroes, though. It was given to soldiers, prosperous merchants, aristocrats, gentry, and all kinds of gentlemen, whether naked or clothed. “There is a functional aspect to putting hand on hip,” writes Rubin in Seen from Behind: Perspectives on the Male Body and Renaissance Art. “In representation as in reality, it can balance or counterbalance a heavy load.” 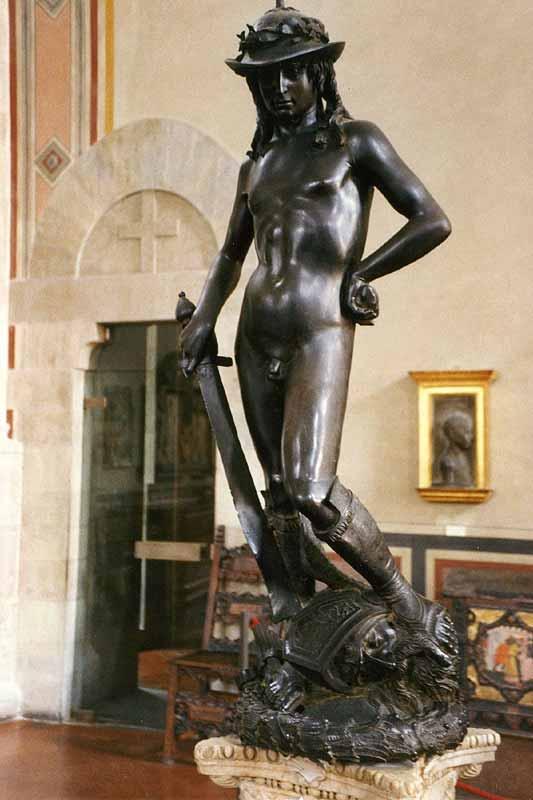 Other than the famous contrapposto, another stance typical of heroic nudity is the straddle-legged pose, usually portrayed from behind. It traces back to ancient Greece, usually in association with war gods, warriors, and workers, and it denotes physical prowess and forcefulness. Pollaiuolo deployed it copiously, and Leonardo da Vinci drafted a sketch for a Hercules statue in that very same pose. Jacques-Louis David, in Intervention of the Sabine Women (1799) features a warrior in a split-legged stance; Pierre Puvis de Chavanne’s Work (1863) has a naked worker wielding a hammer with his feet solidly planted onto the ground. Gustave Caillebotte, with his Man at His Bath, takes this motif into everyday life, depicting a male figure moments after emerging from a bath. Nudes like these, neither Eros nor Apollo, Rubin writes “are assertively masculine. The figures are fully formed and mature, not adolescent.”

Needless to say, the male body is articulated variously in artistic representations. “There’s the tortured body in hell, the ‘nude soul’ in biblical figures: you can find that all through the medieval art, then you have the dying, dropped over figure,” Rubin told Art & Object. Laocoön getting smothered by snakes (42-20 BCE) is an example of the “tortured” body, while the Dying Gaul (323-31 BCE) is a good example of the recumbent nude. During the golden age of Académie des Beaux-Arts, there was more experimentation. “The academic practice was based on taking some canonical forms, and then having the model maybe twisted around or seen from the back or having him put in a position that was a theme and variation on major statues from antiquity,” Rubin continued.

In the twentieth century, avant-garde circles would reject figurative art, momentarily casting aside these poses, stances, and motifs. But like all classics, they have and will continue to come back in fashion.