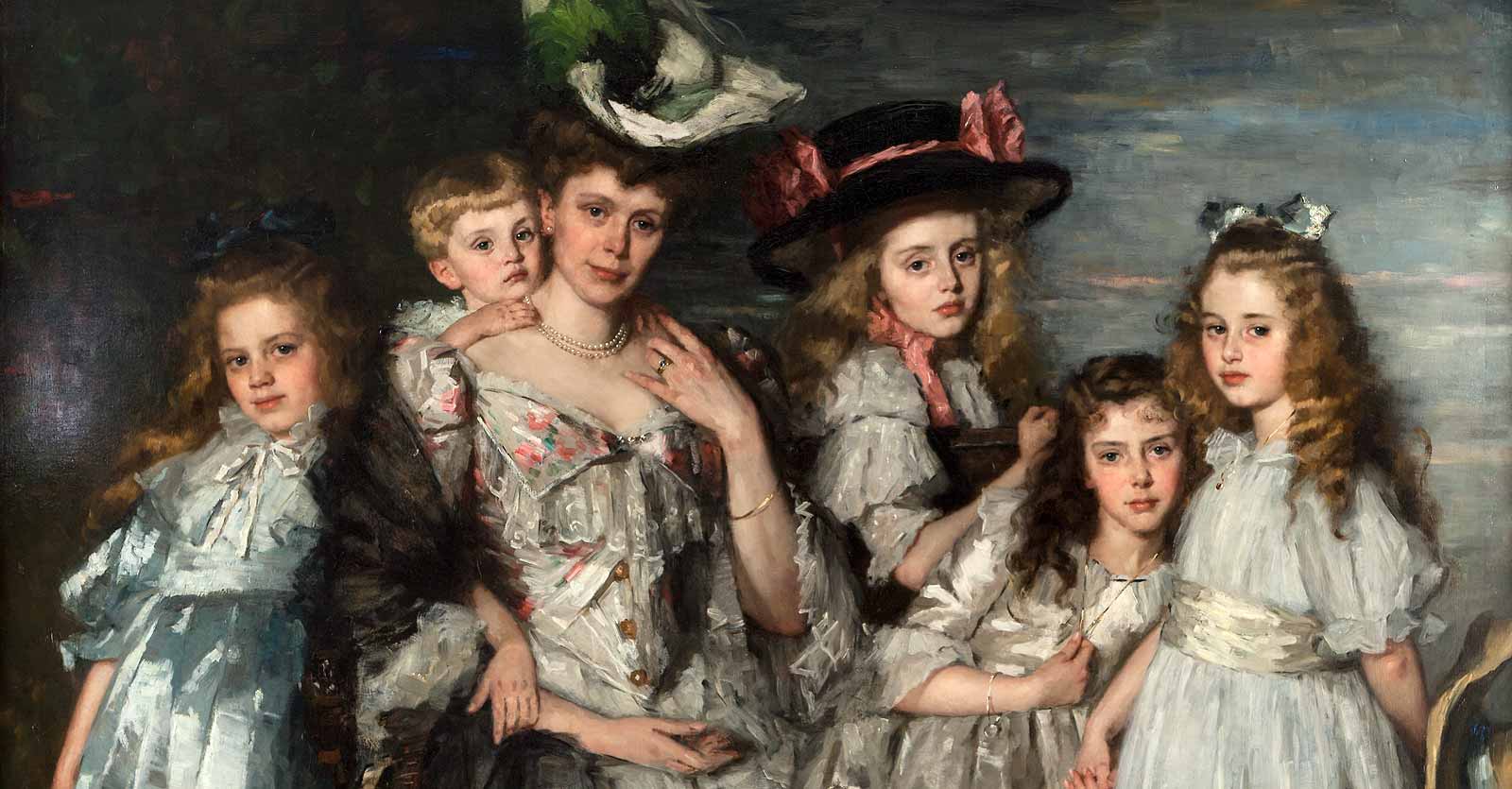 Centraal Museum, Utrecht, The Netherlands
Thérèse Schwartze, Portrait of Aleida Gijsberta van Ogtrop-Hanlo with her five children, 1906. Oil on canvas.
A celebrated painter in her own time, Thérèse Schwartze later fell into obscurity. Now she is being rediscovered.

A celebrated painter in her own time, Thérèse Schwartze later fell into obscurity. Now she is being rediscovered. 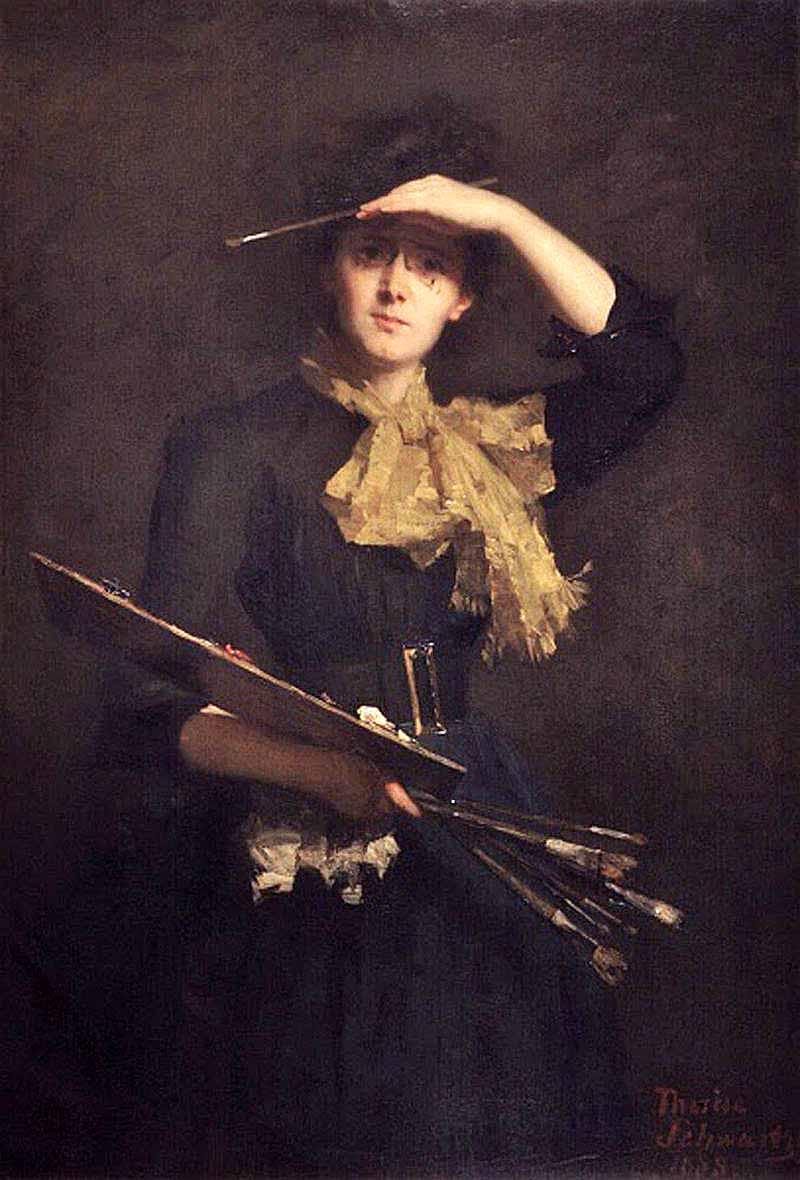 “Schwartze approaches the viewer confidently and with the hint of a smile, although she thought she had presented herself as ‘freckled, small, skinny and pale.’ ”

The artist stares hauntingly out at the viewer, paintbrush in one hand with the other looped through a paint-laden palette. The background of this canvas at Amsterdam’s Van Gogh Museum is bare, and we’re drawn to the painter’s tools: eyes, brush, pigments, and a rag at the ready. The artwork doesn’t depict beloved Post-Impressionist Vincent Van Gogh, though. This is a self-portrait by his Dutch compatriot and contemporary, Thérèse Schwartze, a successful portraitist between the late 19th century and her death in 1918. Schwartze was in high demand in her day but is now fairly obscure, and her likeness was part of the In the Picture group exhibition of artist portraits at the museum.

“The self-portrait as an artist was a significant statement for women,” explains Lisa Smit, curator at the Van Gogh Museum. “Only a handful of female portrait painters were active professionally in the 19th century, one of whom was Schwartze–a celebrated artist nicknamed the ‘Queen of Dutch Painting’. Schwartze approaches the viewer confidently and with the hint of a smile, although she thought she had presented herself as ‘freckled, small, skinny and pale’.” 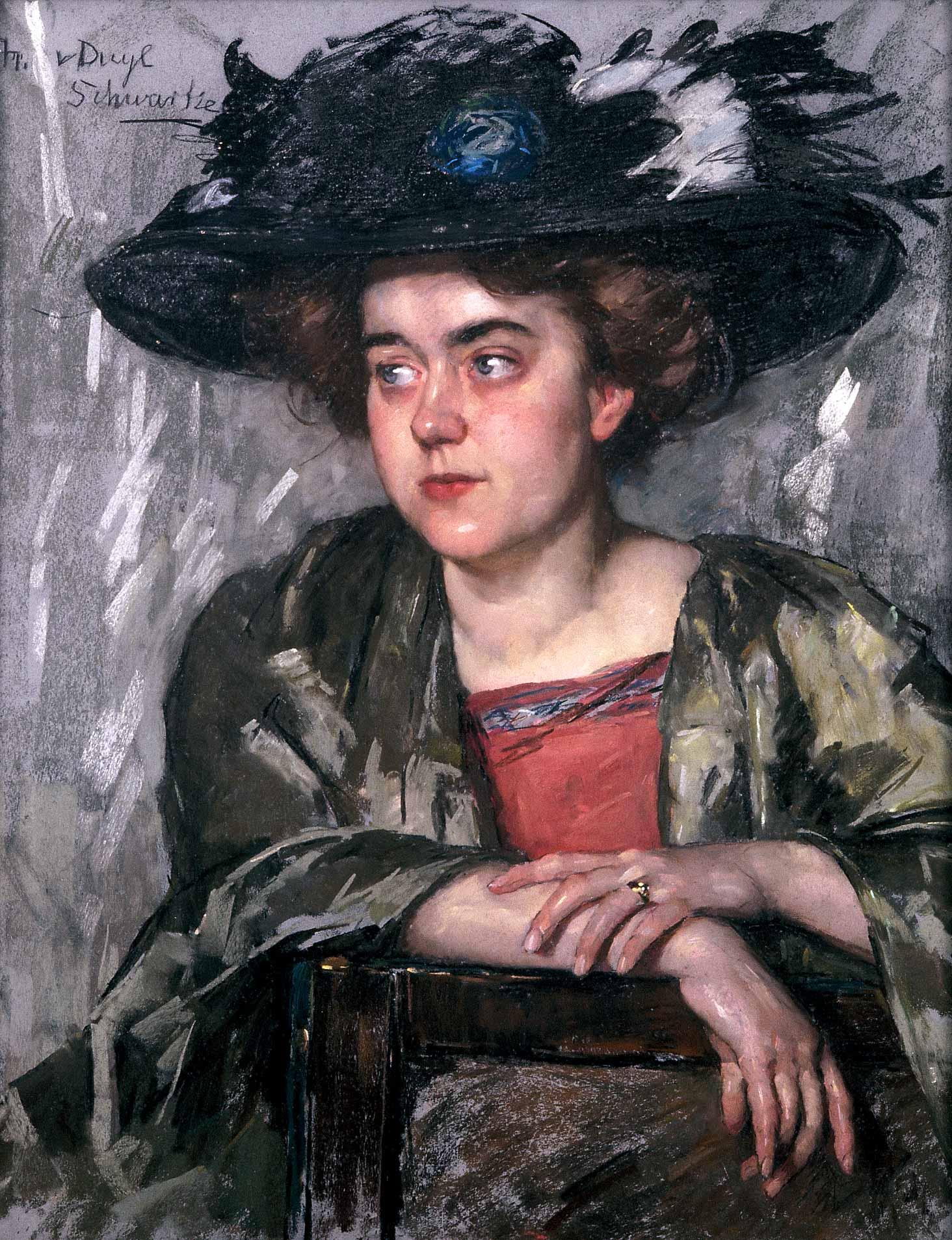 This almost life-sized painting was created as a prestigious commission from Florence’s Uffizi Galleries in 1888, for their collection of artists’ portraits. “None of her Dutch colleagues in her time got that honor, only Rembrandt from the 18th century,” notes Cora Hollema, a leading Schwartze scholar and author of the first English monograph on the artist.

Hollema first became interested in Schwartze as a student in the 1970s, when she was writing a survey of living Dutch female artists. “There circulated an informal list of names of forgotten women artists that deserved further research,” says Hollema. “Schwartze was one of them.”

Schwartze was overlooked by the time Hollema began digging into the painter’s past, but her career took off at a time when a new, wealthy Dutch class wanted to flaunt its status. “She was in demand because she produced a new elegant, un-Dutch, extravagant, flattering style of portraiture which was in demand by the upcoming ‘new money’,” Hollema adds. “The new entrepreneurs and industrialists in the second half of the 19th century.”

Schwartze’s father, painter Johan Georg Schwartze, had luckily been grooming her to be a breadwinning artist from the time she was a five-year-old. This was highly unconventional in Holland at the time, since middle-class ladies were not supposed to financially support themselves. By age 16, when she began apprenticing in her father’s studio full time, Schwartze wrote to him in a birthday letter that “I will apply myself more to everything, so as, with God’s blessing, to be able to earn my living by painting.” 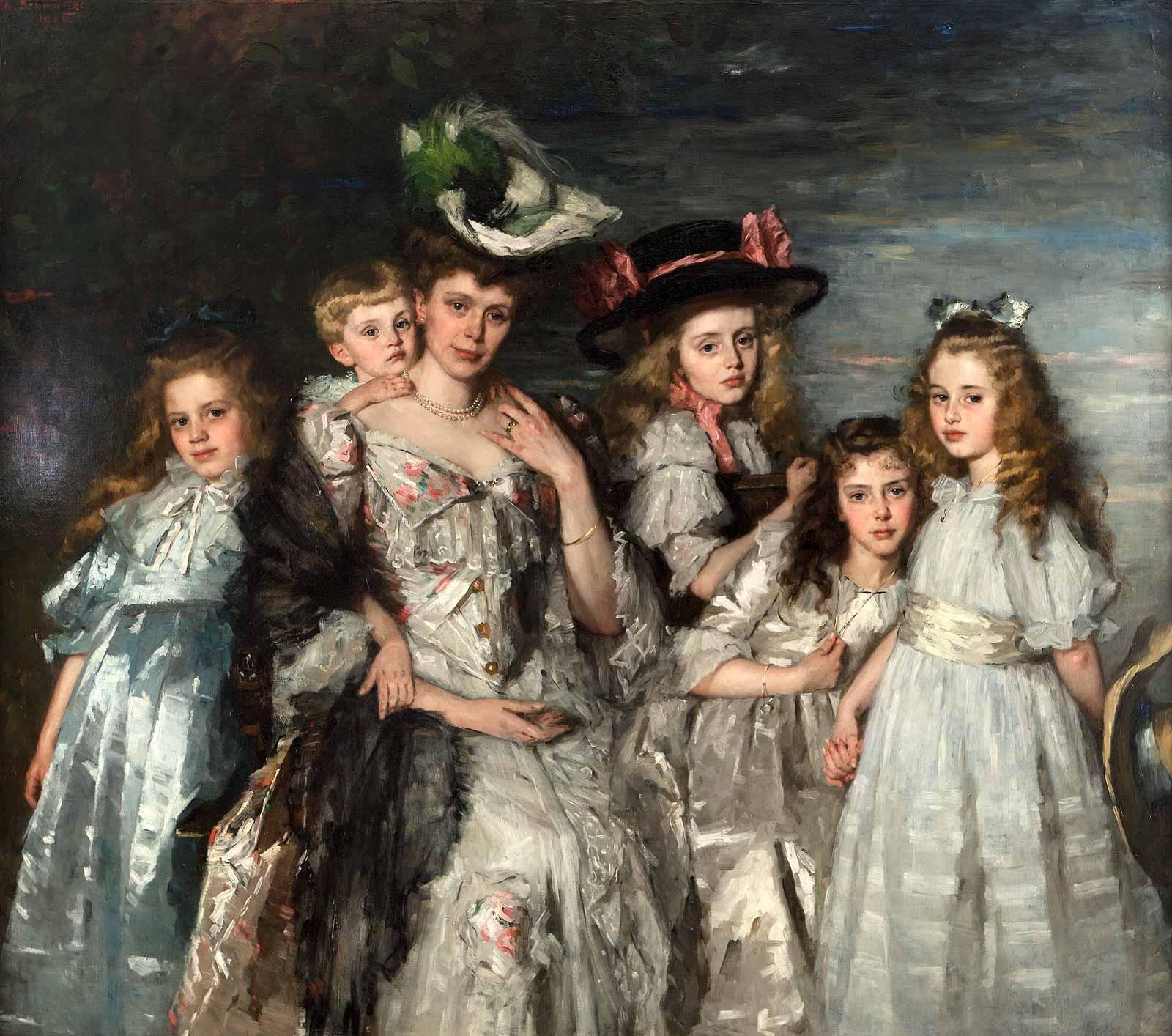 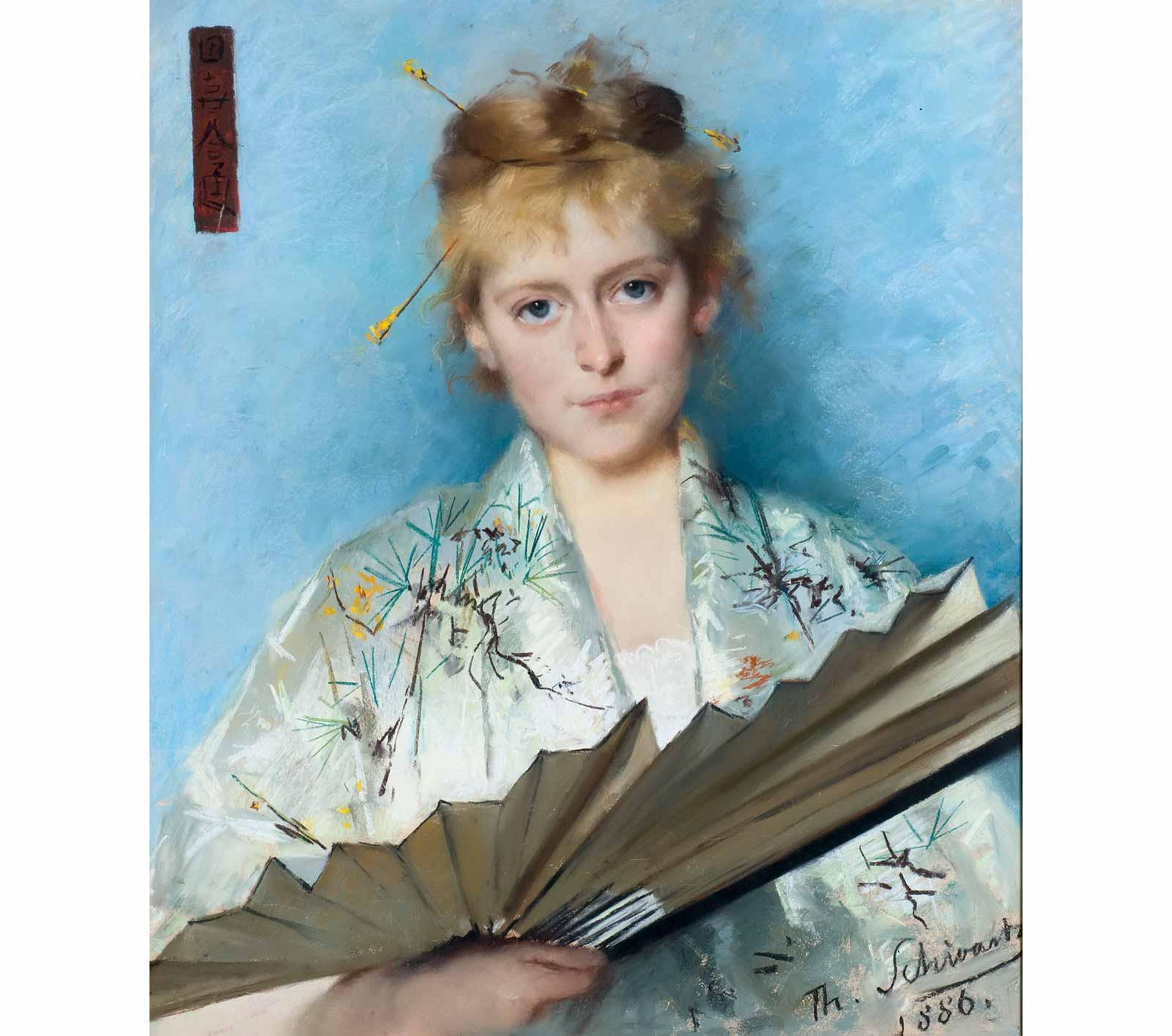 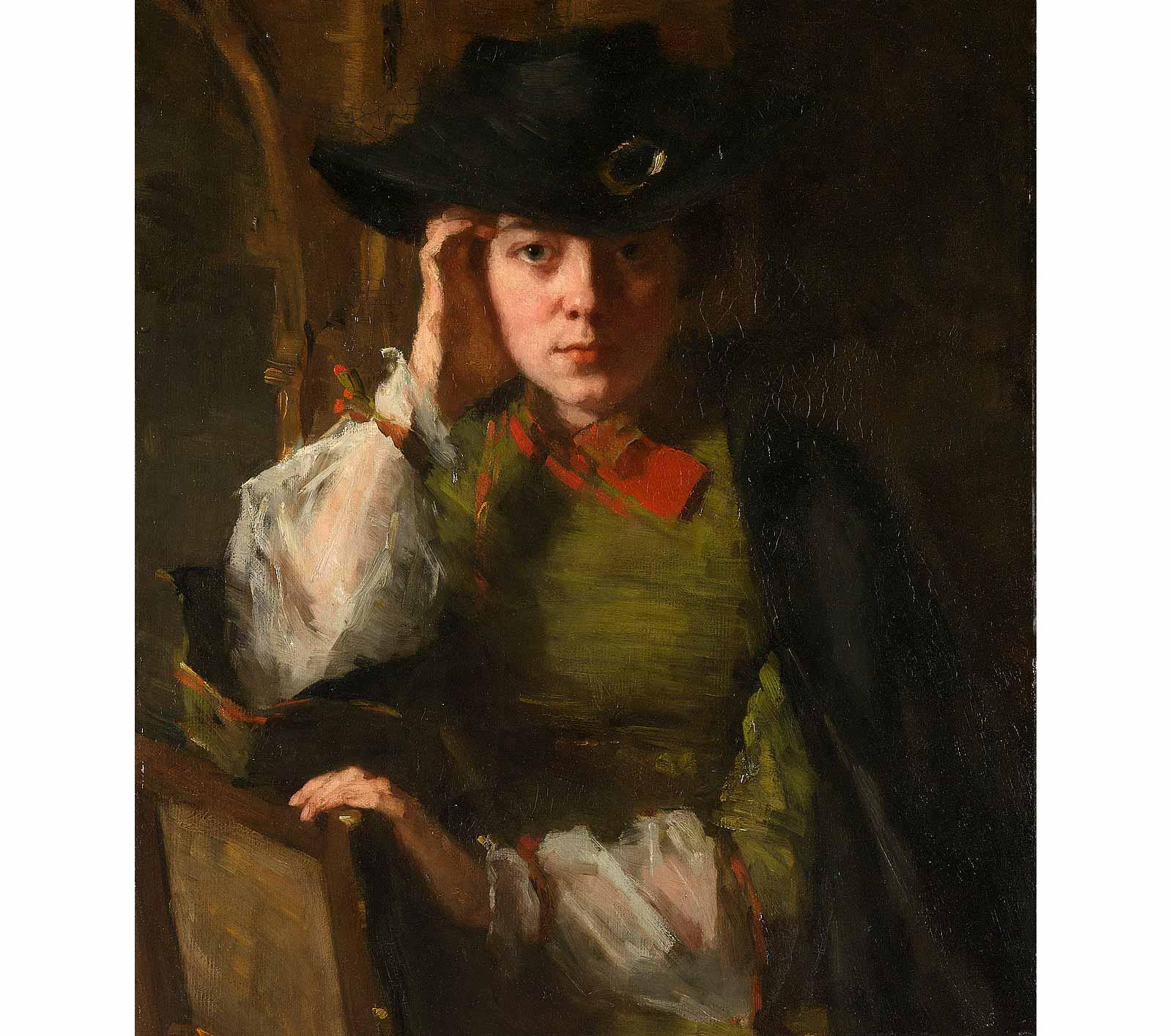 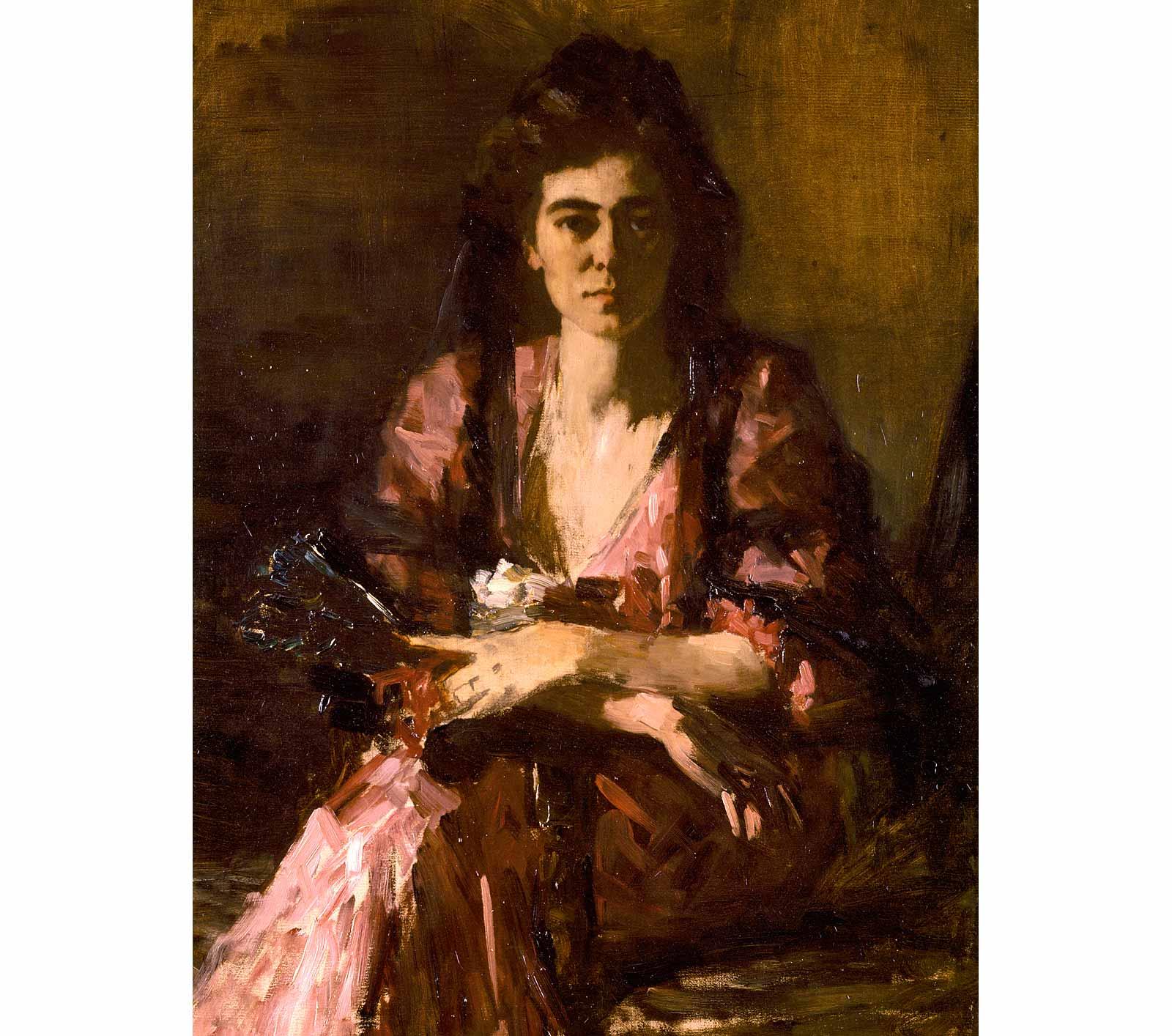 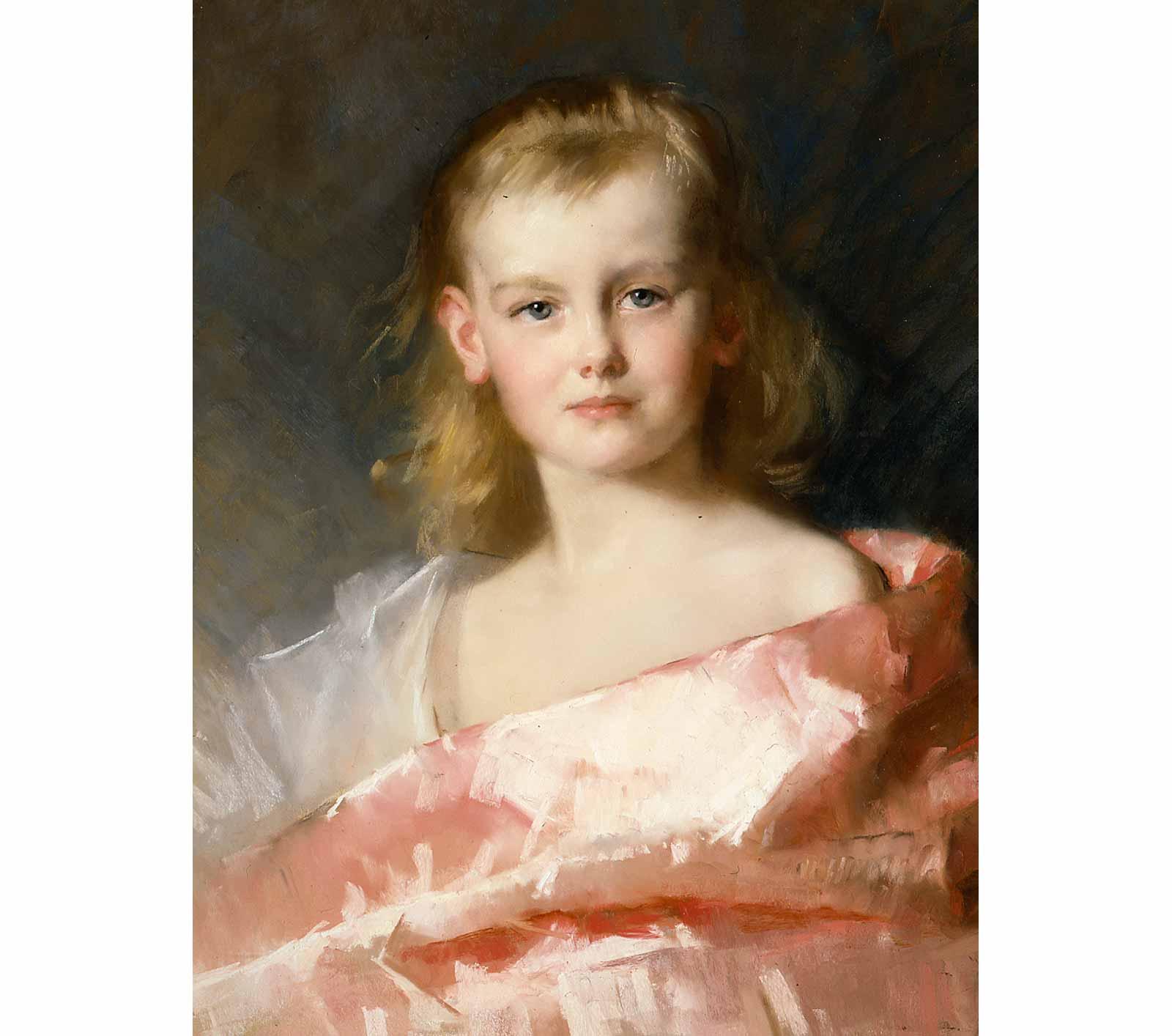 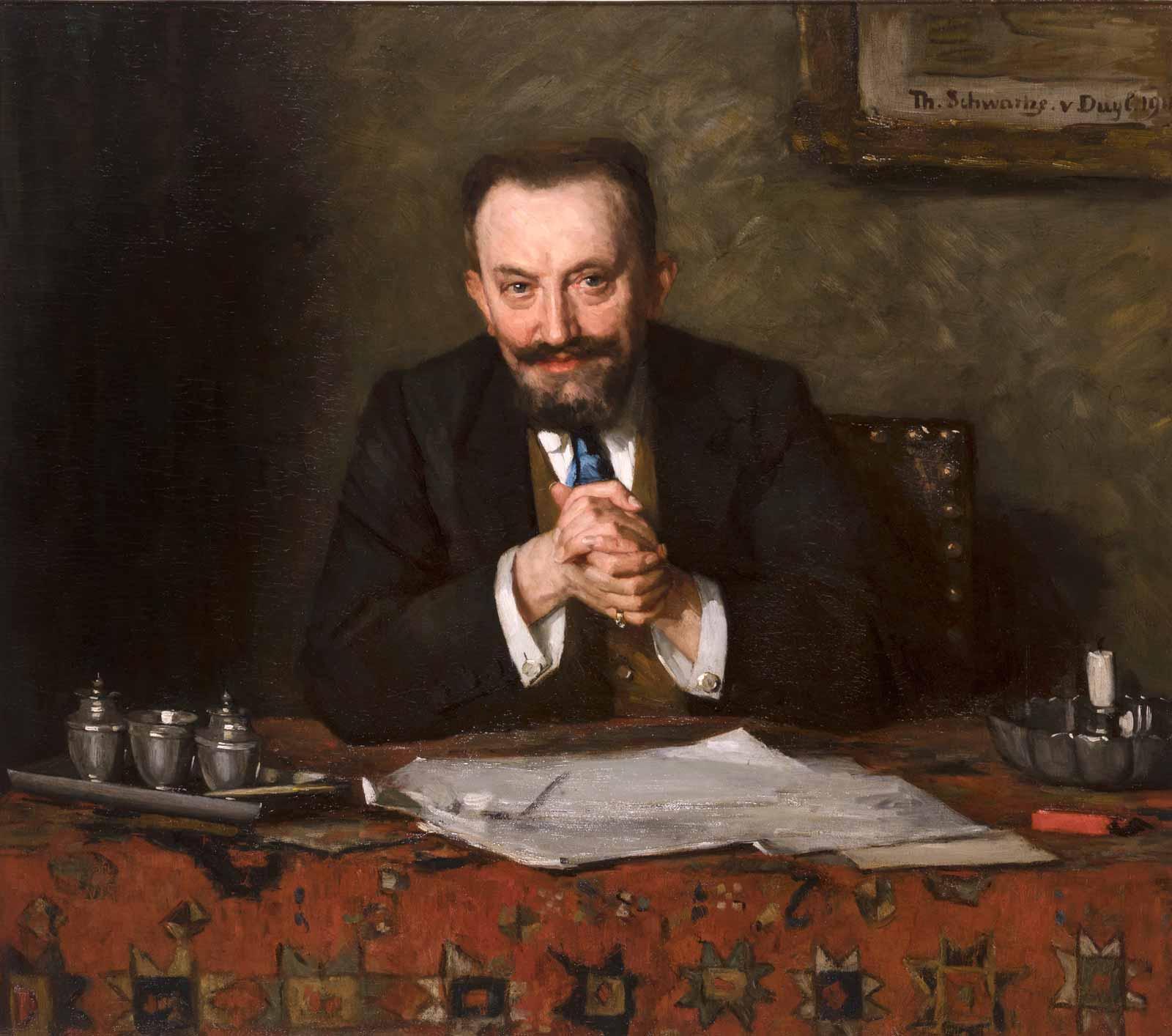 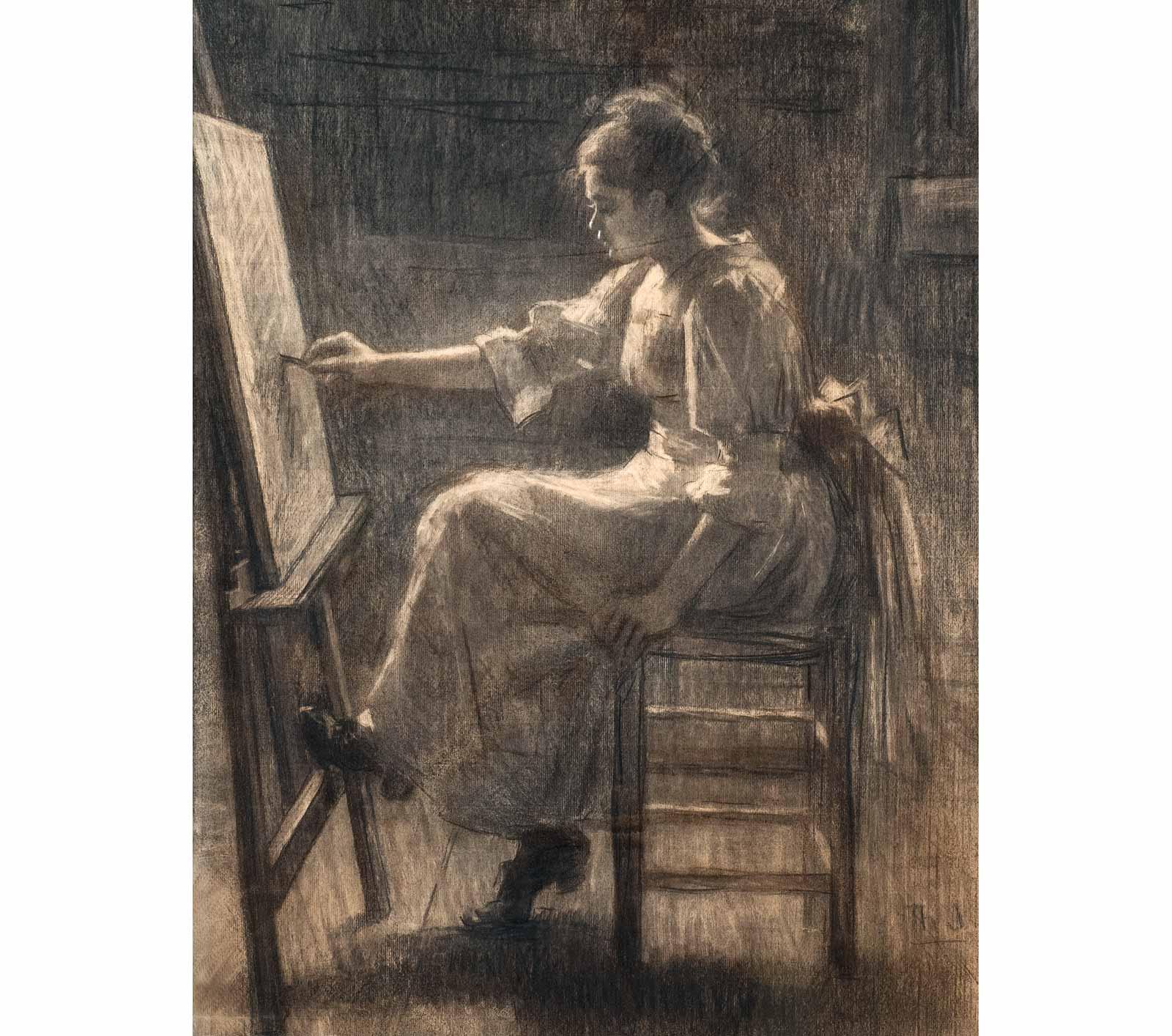 The letter proved to be prophetic; when her father died a few years later she was left to support her mother, three sisters, and brother with her art.

Schwartze’s colleague and friend, painter Wally Moes, characterized the driven artist in her autobiography. “Thérèse had none of that quasi-artistic quality, that weak self-indulgence,” described Moes. “She gave her all whenever it was time to work; she never gave up, and saw no point in holding forth or dissecting her feelings in self-pity. She never missed a chance to exploit her talents or strengthen her position as a portrait painter.”

Schwartze hustled and quickly built a reputation as a skilled portrait painter, working out of the same third-story studio in the family home at 1091 Prinsengracht Street once used by her dad. Word of her talent spread to the Dutch royal family, who first commissioned her in 1881 and ultimately hired her to paint a portrait of Queen Wilhelmina for her 1897 coronation. Schwartze also established a reputation across Europe, making sure her work was exhibited in at least one city every single year between 1878 and 1918. Among these venues was the illustrious Paris Salon, where she was awarded a Gold Medal in 1889.

The press also took note of Schwartze, praising her work. “The merits of this picture do not derive solely from its remarkable, perfect likeness, but equally well, and from the vantage point of art perhaps more so, from the admirable treatment, which would certainly not lead one to suspect a woman’s hand,” read a typical (albeit backhandedly complimentary) review from 1880 in Algemeen Handelsblad. “Miss Schwartze has produced a painting that entitles her to a place, indeed, a place of honor, among our leading masters.”

This master of portraiture created around 1000 artworks during her 40-year career, translating roughly to 20 paintings a year.

This master of portraiture created around 1000 artworks during her 40-year career, translating roughly to 20 paintings a year. Since many of her portraits were created to be cherished by family members, most of her work has remained in private collections (rendering it difficult to see or study). Around 115 of her paintings are in public collections in the Netherlands, and 12 are in foreign public collections; the whereabouts of nearly 400 canvases is still unknown.

Beyond being sequestered in private collections (or potentially lost), Schwartze’s work is not often on view because her style became passé around the turn of the 20th century. Photography replaced painted portraits, and avant-garde movements like Impressionism and Post-Impressionism (the style of her Dutch contemporary, Vincent Van Gogh) were more in vogue. Paintings of royalty and captains of industry were also increasingly replaced by portraits of farmers, postmen, and café owners, as the Industrial Age increased empathy towards the working class.

Still, Schwartze’s work is slowly coming back into view and has been included in a few exhibitions over the past few years. One of her drawings participated in Women’s Histories: Artists Before 1900 at the Museu Sao Paolo last year; she was recently featured in a group show of Dutch Impressionists at the Frans Hals Museum; two of her paintings have been on permanent view at the Rijksmuseum since 2013, when the renovated museum reopened. “Yes,” says Hollema, “Schwartze is regaining recognition again.”

Schwartze’s first biographer, Willem Martin, published a book about the artist shortly after her death in 1918. Her dark oil paintings were clearly outdated by then, but he avoided the question of whether her work would be remembered. Martin simply concluded his chronicle of her life, writing that she was “a personality who will not be forgotten.” 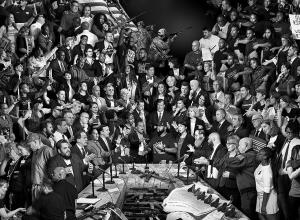