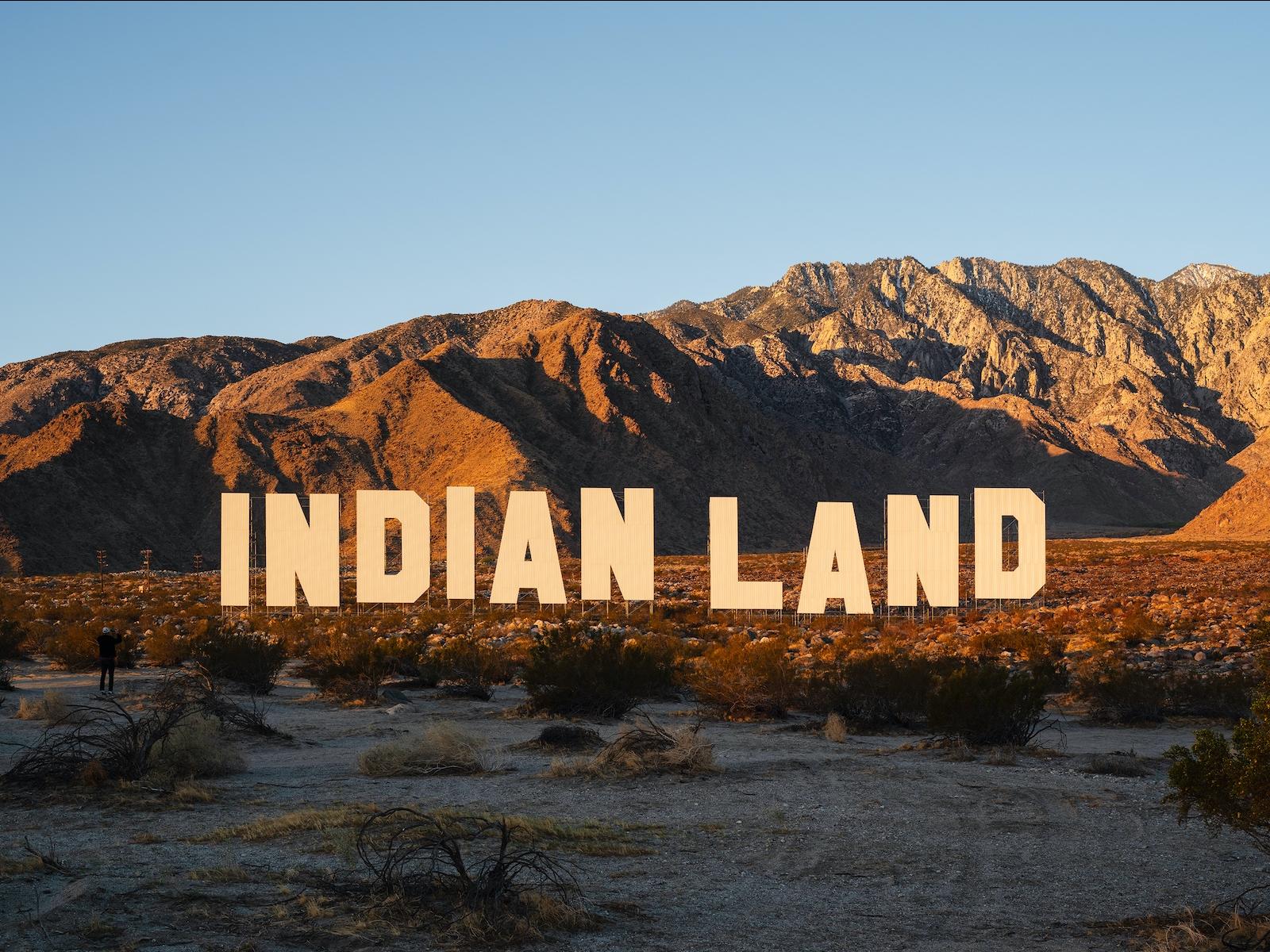 The organizers of Desert X, the biennial site-specific art festival spread throughout Southern California’s Coachella Valley, ought to be pleased that this year’s event, running through May 16, is naturally socially distanced. But even without pandemic worries, Desert X has a long shadow to crawl out from under.

After setting last year’s show in the desert of AlUla, an ancient oasis in Saudi Arabia, the festival came under fire for taking money from the government of Saudi Crown Prince Mohammed bin Salman, who the CIA recently cited as the pivotal figure behind the brutal murder of American resident and journalist, Jamal Khashoggi.

At the time three Desert X board members resigned in protest, including Ed Ruscha who said in an interview with the Desert Sun that moving the festival to Saudi was like, “inviting Hitler to a tea party.” Los Angeles Times’s art critic, Christopher Knight called the decision “morally corrupt.” At the time, co-curator Neville Wakefield, who this year shares duties with César García-Alvarez of The Mistake Room, defended the move to KCRW saying the ambition of Desert X is, “to reach beyond the immediate confines of the Coachella Valley and out into the world beyond. And so when we were invited to participate in this, you know there was a certain amount of soul searching. And then we were very happy to take part.”

A year later, the organization has yet to disclose how much they were paid by the Saudi government and other questions persist. At a Jan. 28 meeting, the Palm Springs City Council voted not to underwrite a portion of the cost to install artist Christopher Myers’ sculpture, ​The Art of Taming Horses, telling the fictional story of two cowboys, one African American, and one Mexican. Funding generally runs through PS Resorts, a consortium of the city’s high-end hotels, who, in 2019, forked over as much as $62,500 for the festival, but this year offered only $10,000. 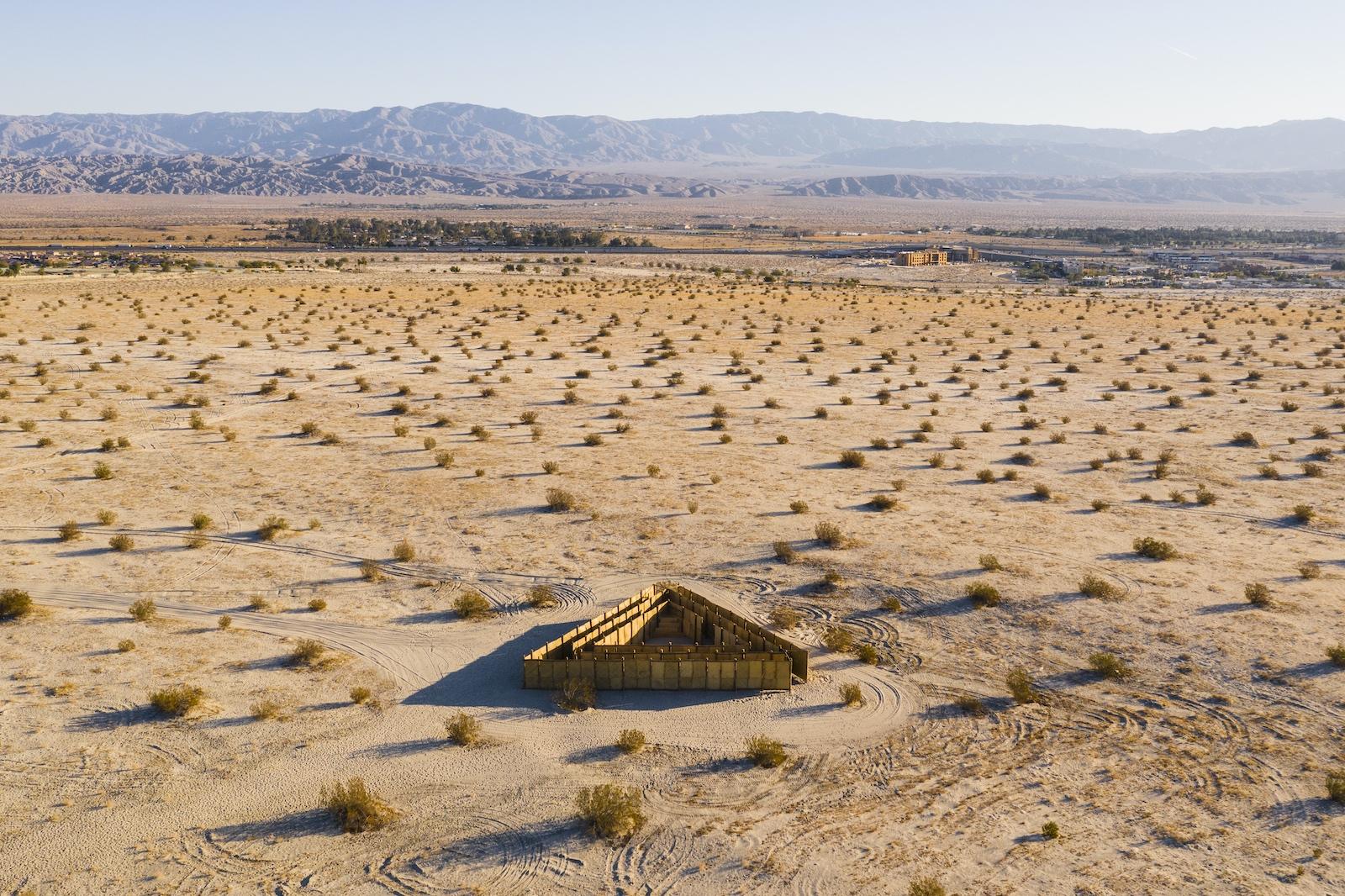 “I love Desert X. It’s a huge draw, and really fun for residents,” Mayor Holstege said at the meeting. “I think it’s really unfortunate that they went to Saudi Arabia, with their track record of human rights abuses … I would like to see Desert X continue in the city of Palm Springs, and that they can reform their ways and stop partnering with human rights abusers.”

Perhaps in an effort to address the scandal, this year’s projects cover wide-ranging social and environmental issues, exploring “themes of land rights and ownership, the desert as a border, migration, water exploitation, social justice, racial narratives of the west, the gendered landscape, and the role of women and young people.”

When asked about ongoing concerns, Chicago, told The Los Angeles Times, “Tell me an institution that doesn’t have tawdry connections.” Her smoke sculpture, Living Smoke: A Tribute to the Living Desert, meant to celebrate the fiftieth anniversary of the Living Desert Zoo and Gardens in Palm Desert, was canceled over concerns for the region’s fauna. 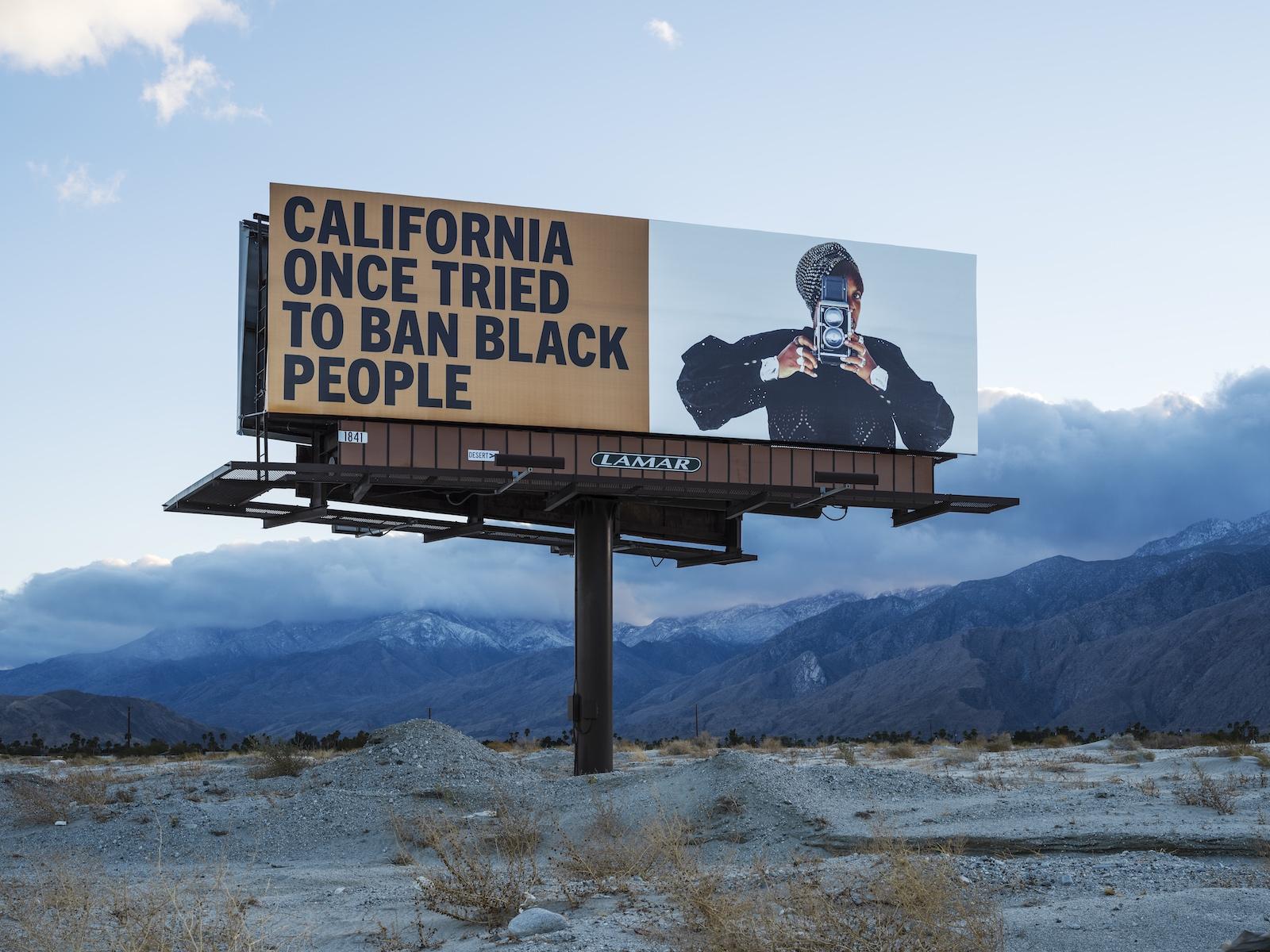 Desert X installation view of Xaviera Simmons, Because You Know Ultimately We Will Band A Militia, 2021.

“Palm Springs calling anybody out on anything is extremely hypocritical,” Xaviera Simmons tells Art & Object. Her entry, Because You Know Ultimately We Will Band A Militia, is a series of billboards employing nineteenth-century paintings, photography, and slogans like, “California Once Tried to Ban Black People” and “We Call for a Radical Redistribution of Resources Because Economic Precarity is Another Form of Harm.”

“Palm Springs has a history of settling a space that is not its own and then discriminating heavily to the point where you don't even have a large black population,” says Simmons. ‘These are the contradictions of calling one place out while you simultaneously are oppressing and causing harm or censure in your own homeland.”

Simmons, whose practice spans photography, performance, painting, video, sound, sculpture, and installation, has pieces in prestigious collections such as MoMA, the Guggenheim, and Miami’s Pérez Art Museum. With Because You Know Ultimately We Will Band A Militia, she aims to examine whiteness and the way it informs social and civic structures and institutions.

“We are at a juncture where whiteness as a construction is maybe seeing itself a little clearer and understanding the historical ramifications of what that means,” she says. “The country is built and survives at the pleasure of whiteness as a whole. It doesn’t matter if some white folks vote this way or that, unless they decide they also want to pay the debt as a collective and move as a collective to undo things.”

With The Wishing Well, Serge Attukwei Clottey addresses potable water shortages by employing Kufuor gallons, used in rural regions of Ghana to transport water, to emulate a standing well. For her piece, Women’s Qualities, Ghada Amer asked locals to describe the qualities found in women. The result is a series of planters spelling out some of their descriptors, forming a circle in a grassy clearing. 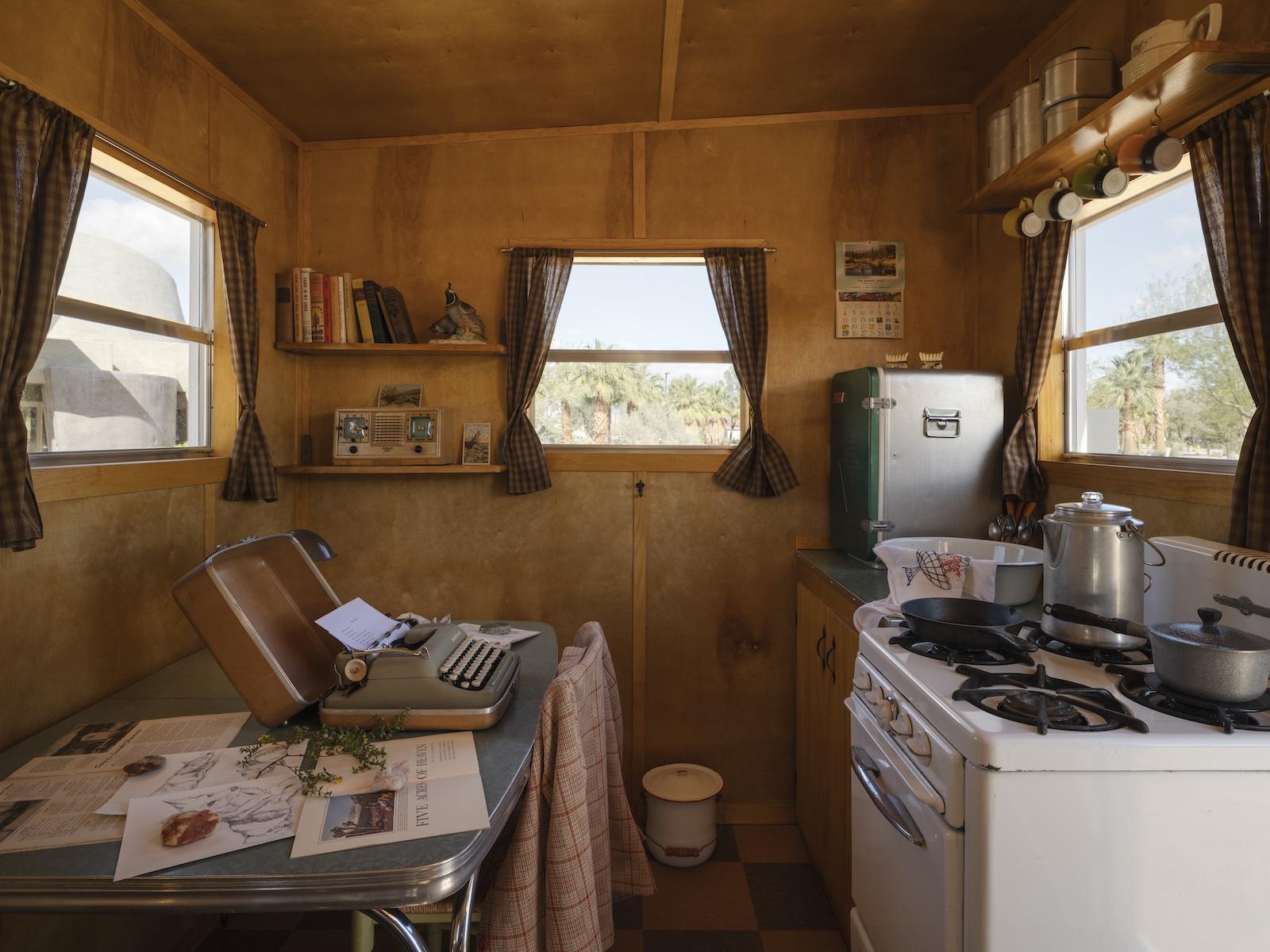 Jackrabbit Homestead is Kim Stringfellow’s diorama symbolizing homesteaders who arrived in 1938, on the heels of Southern California’s Small Tract Act. It stands in contrast to Nicholas Galanin’s Never Forget, which comments on land appropriation from indigenous peoples in Southern California. Never Forget rises fifty feet and is three hundred thirty feet long, a scale replica of the famous Hollywood sign lengthened to its original “Hollywoodland,” promoting a 1923 housing development that excluded people of color.

“The most important aspect of it is the land-back aspect of it, a call for landowners, private and public, to consider the history of the land they have title to and to further investigate how that’s impacted indigenous communities,” says Galanin, a member of the Tlingit and Unangax̂ tribes in Alaska.

Pieces like White Noise American Prayer Rug, a prayer rug with a T.V. screen showing static, and Things Are Looking Native, Native's Looking Whiter, a photo portrait split between Star Wars’ Princess Leia and a Hopi woman, with both wearing the same hairstyle, appeared in his 2018 retrospective at Phoenix, Arizona’s Heard Museum.

“The land-back movement is very real and is necessary for our community to understand and listen to. This work is not a land acknowledgment, it's a call for a land return to indigenous peoples.”

Erasure of a different kind is the focus of Felipe Baeza’s mural Finding Home in My Own Flesh, which examines the invisibility of queer communities of color in the Coachella Valley. ParaPivot (sempiternal clouds) by Alicja Kwade is a large-scale sculptural work with white rocks seated on a metal frame. Another large-scale piece, The Passenger by Eduardo Sarabia is a triangular maze structure made from woven palm tree fiber. Stratas of time are emulated in Zahrah Alghamdi’s What Lies Behind the Walls, a monumental sculptural wall that echoes abandoned buildings in the North Saudi desert.

Environmental issues loom large in the abstract works of Vivian Suter, and her Tamanrasset is no exception. An installation of large-scale paintings and light set inside a modernist building, Tamanrasset draws from the colors and abstractions of the desert outside. It’s named for a Saharan oasis she came across forty-five years ago, “a gateway to the vast and unknown.”

“For me, every painting is a departure. And the paintings for ‘Tamanrasset’ are interesting for me to show because of the interaction they will have with the desert surroundings,” she said in an email. “As the paintings were made in Guatemala, one could also think that the building and the paintings will be like an oasis in the desert.”

“Something serving as a refuge, relief, or pleasant change from what is usual, annoying, difficult, etc.” That’s the definition of the word “oasis”. It also defines Desert X, a perfect place for the art-starved to slake their thirst. But like a mirage, the festival changes with the light.