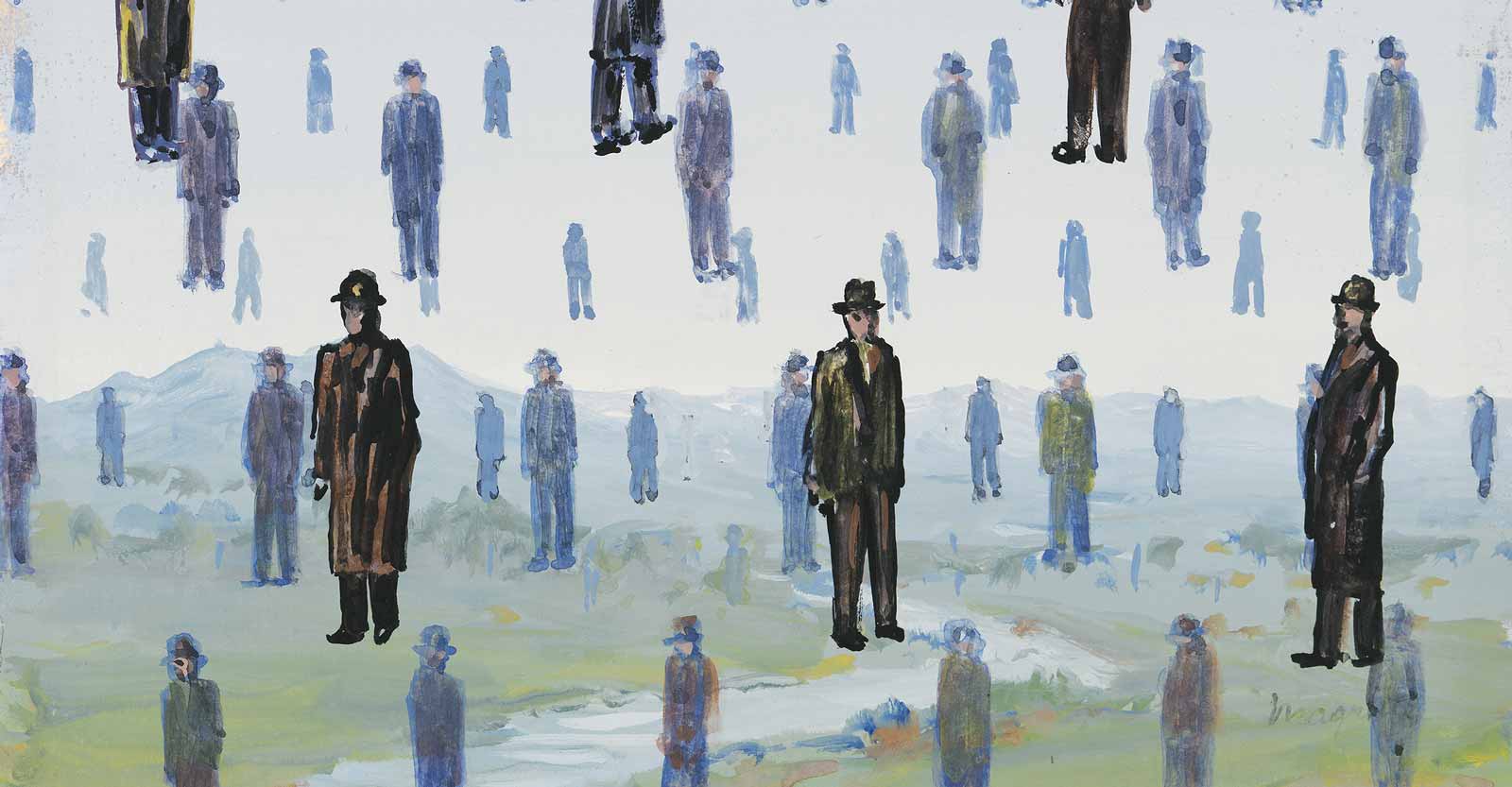 Before he was known for pipes, bowler hats, and apples, Magritte began his illustrious career in advertising. 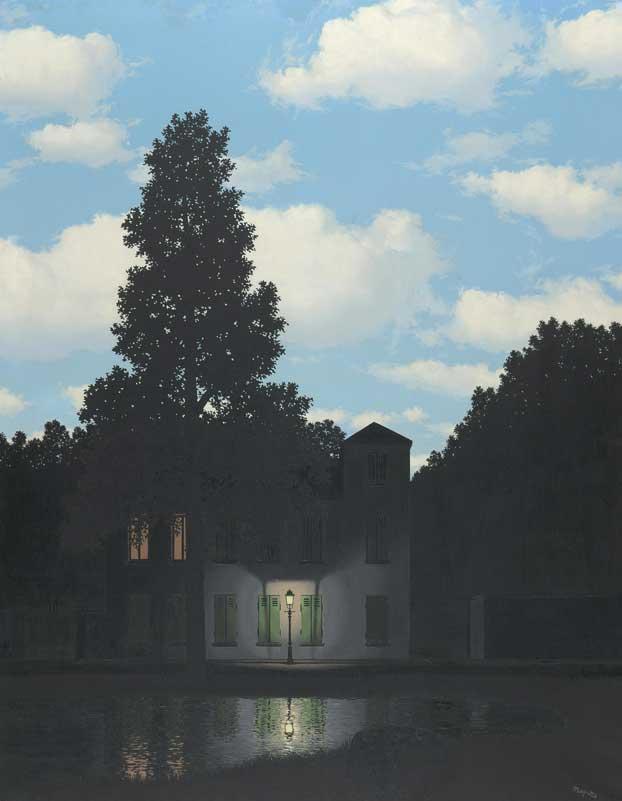 “To be a surrealist means barring from your mind all remembrance of what you have seen, and being always on the lookout for what has never been.”

The consummate Surrealist painter, René Magritte (1898–1967) is widely celebrated for his amusing, thought-provoking images featuring ordinary objects represented in extraordinary settings. Distinguishable for his uncanny use of clouds, pipes, bowler hats, apples, and nudes, his paintings influenced subsequent generations of pop and conceptual artists and—perhaps more notably—the world of advertising, which is where his own illustrious career began.

Born in Belgium to a businessman father and a milliner mother, he received weekly painting lessons from age twelve and at seventeen started studying fine art at the Académie Royale des Beaux-Arts in Brussels, while simultaneously taking classes in the decorative and graphic arts there, too. In an interview shortly before his death, he claimed to have polished his drawing skills in the school’s classes on flora and fauna, where he also acquired his skills in anatomy and perspective, which helped make his pictures seem more real.

Magritte showed his early work—initially created in the style of the Impressionists before morphing into a blend of Cubism and Futurism—in local salon presentations and avant-garde publications. The artist’s first means of survival, however, came not from his personal paintings and drawings but from design work drawing decorative objects for wallpapers and through commissions for advertisements and catalogs. Designing posters and brochures for chocolate makers, car manufacturers, fashion houses, music publishers, and the cinema and theatre, Magritte was able to explore media and aesthetic styles, while sustaining a living and developing his painting skills and ideas on the side.

Inspired by the discovery of a dreamlike juxtaposition of objects and surroundings in the paintings of Giorgio de Chirico, who had a significant impact on the Surrealist movement, and Max Ernst’s innovative use of collage to construct strange new narratives, Magritte established a signature style of figurative painting, which Ernst later described as “collages painted entirely by hand.” 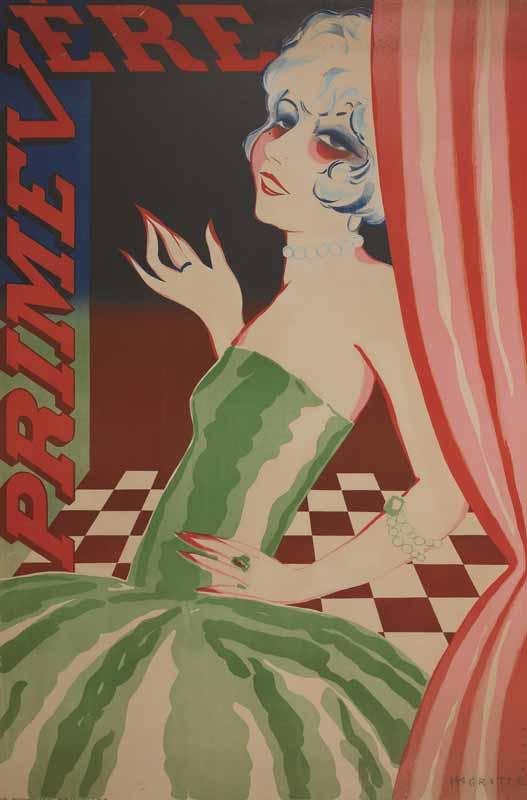 Equally important to the Surrealists, whose philosophical ideas of art-making Magritte wholeheartedly embraced from 1926 through 1942, was the writings of Isidore-Lucien Ducasse, a poet who, under the pseudonym Comte de Lautréamont, had published Les Chants de Maldoror in 1869. A singular phrase from his poetic novel—the metaphor "as beautiful as the chance encounter of a sewing machine and an umbrella on an operating table"—became a key element in the Surrealist doctrine of objective chance. The metaphor describes one of the most important principles of movement’s aesthetic: the imposed juxtaposition of two extraneous realities, which challenges an observer's preconditioned perception of realism.

The 2013 exhibition Magritte: The Mystery of the Ordinary, 1926–1938, co-organized by New York’s Museum of Modern Art, The Menil Collection in Houston, and The Art Institute of Chicago, was the first show to focus exclusively on the artist’s breakthrough Surrealist years, while the San Francisco Museum of Modern Art’s 2018 exhibition René Magritte: The Fifth Season focused on the latter half of his production, from approximately 1943 to 1967, which was a period of artistic transformation and revitalization. Although images and information on these shows can still be found on the museums’ websites and gleaned from the accompanying exhibition catalogues, important works from the full arc of the artist’s creative life can continuously be seen at the magnificent Magritte Museum in Brussels.

Reviewing some of the works from the museum’s collection, highlights include a large, vintage advertisement for the soup stock Pot au Feu Derbaix (a design commission that contacts of his father helped him land), a catalog for the Samuel fur company, a diverse group of sheet music covers in a variety of aesthetic styles, and a striking 1926 commissioned poster for the popular singer Marie-Louise Van Emelen, better known as Primevère.

The 1927 painting The Secret Player, which is one of Magritte’s largest compositions (around the same size as The Menaced Assassin, also from 1927, that’s part of the large collection of Magritte’s momentous canvases at MoMA) was created in the artist’s new collage style of composing pictures. In it, two men are observed playing cricket in a forest of table legs (Magritte referred to these repeated motifs as bilboquets, referencing the French children’s cup-and-ball game) that are sprouting branches and colored leaves.

A large tortoise floats above the men, but its head looks more like the ashes of a cigar, which Magritte smoked at the time (along with a pipe, which he prominently employed in later paintings). Off to the side in a closet, we discover a woman wearing a facial mask (most likely related to the Spanish Flu, which swept through Europe a few years earlier). At the far right edge of the painting, a curtain is pulled back to indicate that the whole scenario is staged. But who is the secret player? No one knows, as Magritte would explain, “If one looks at a thing with the intention of trying to discover what it means, one ends up no longer seeing the thing itself, but of thinking of the question that is raised.” 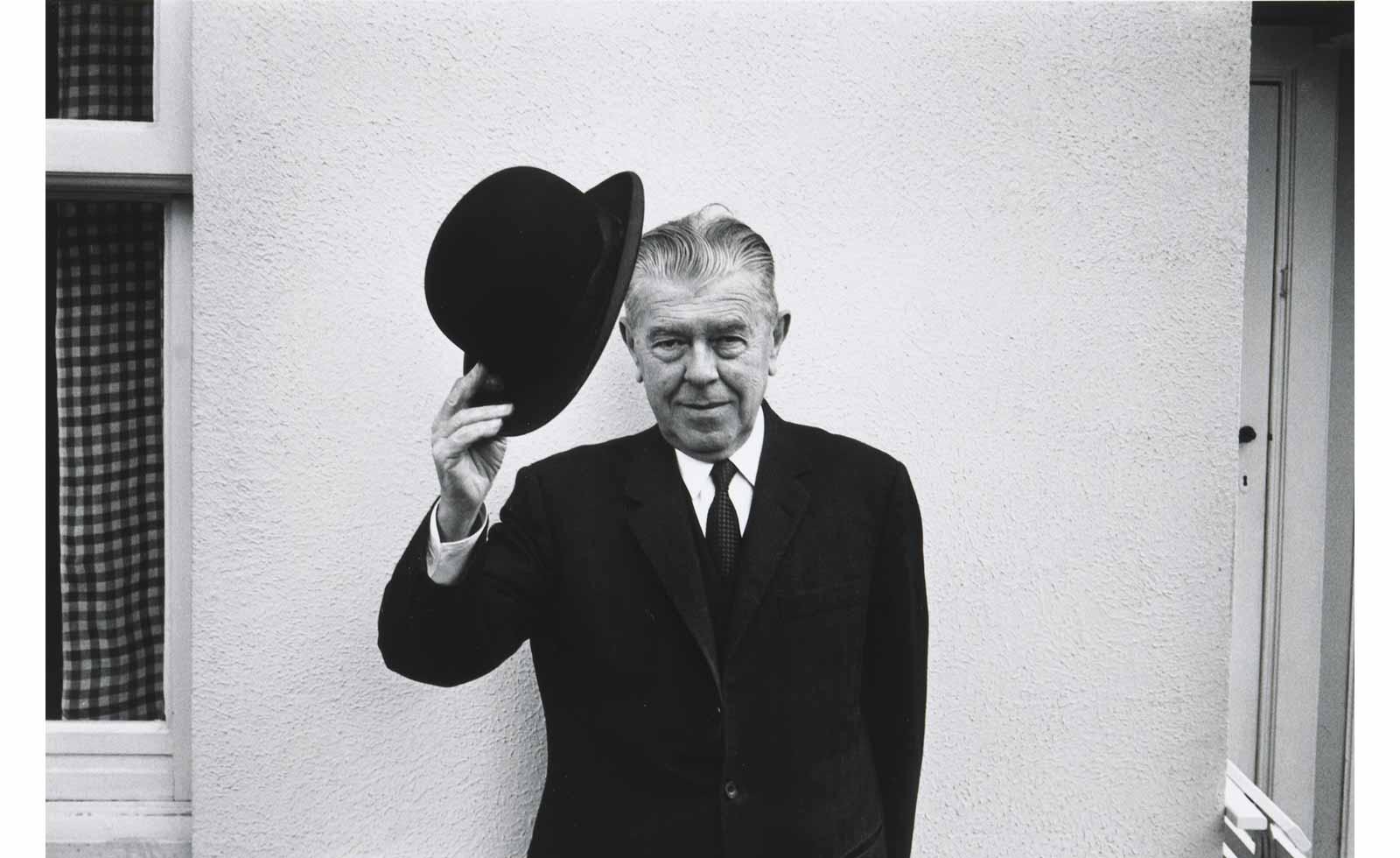 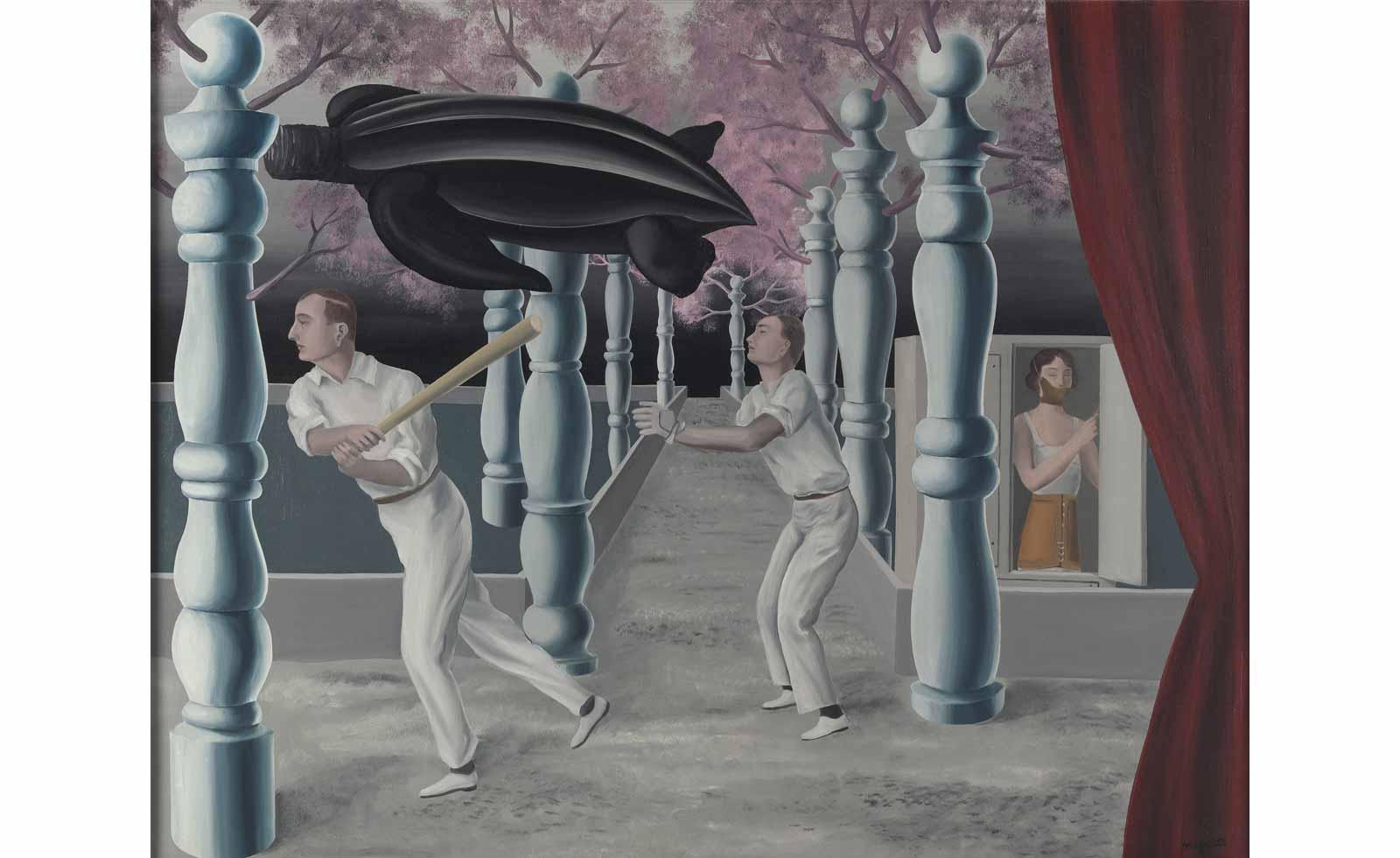 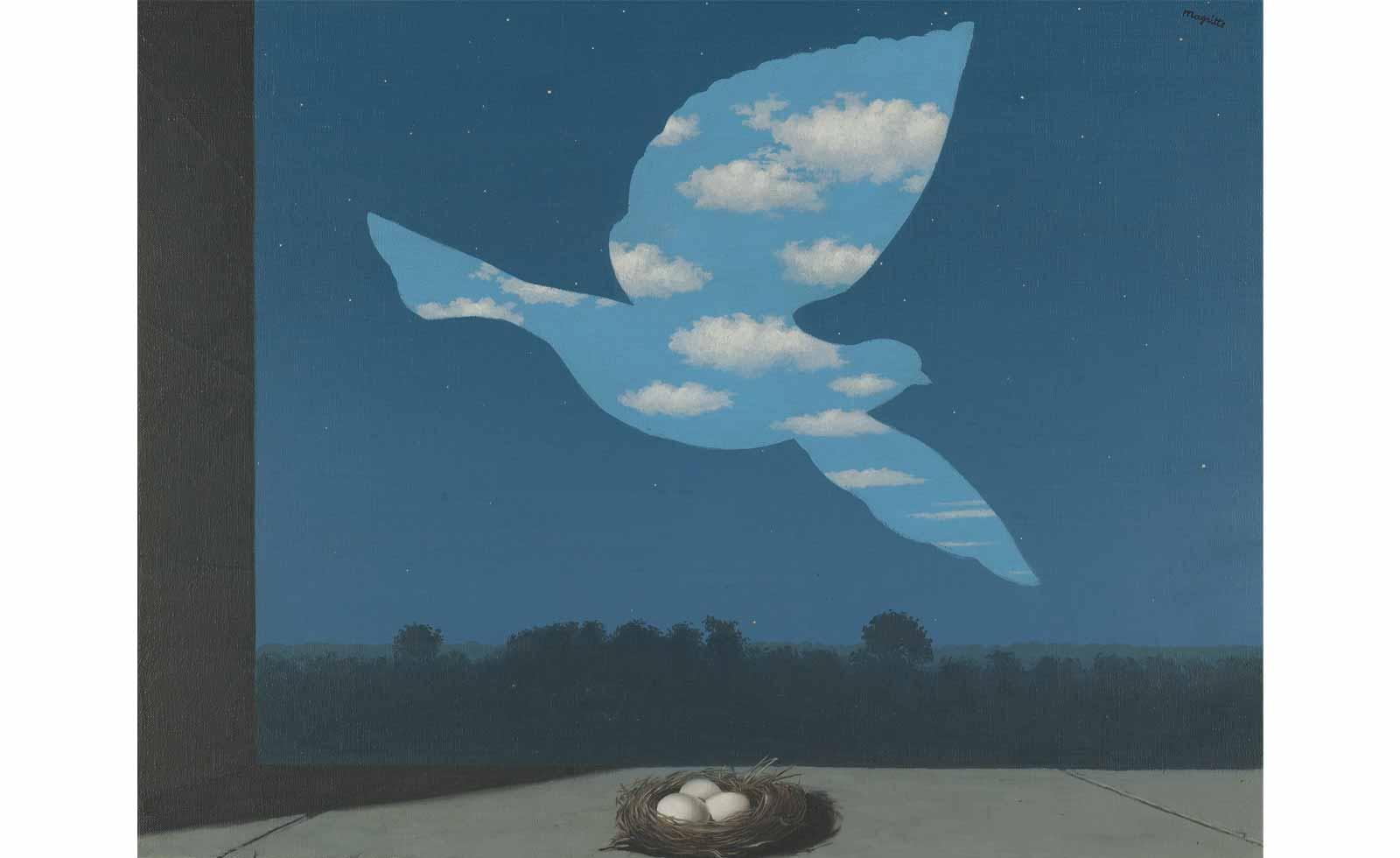 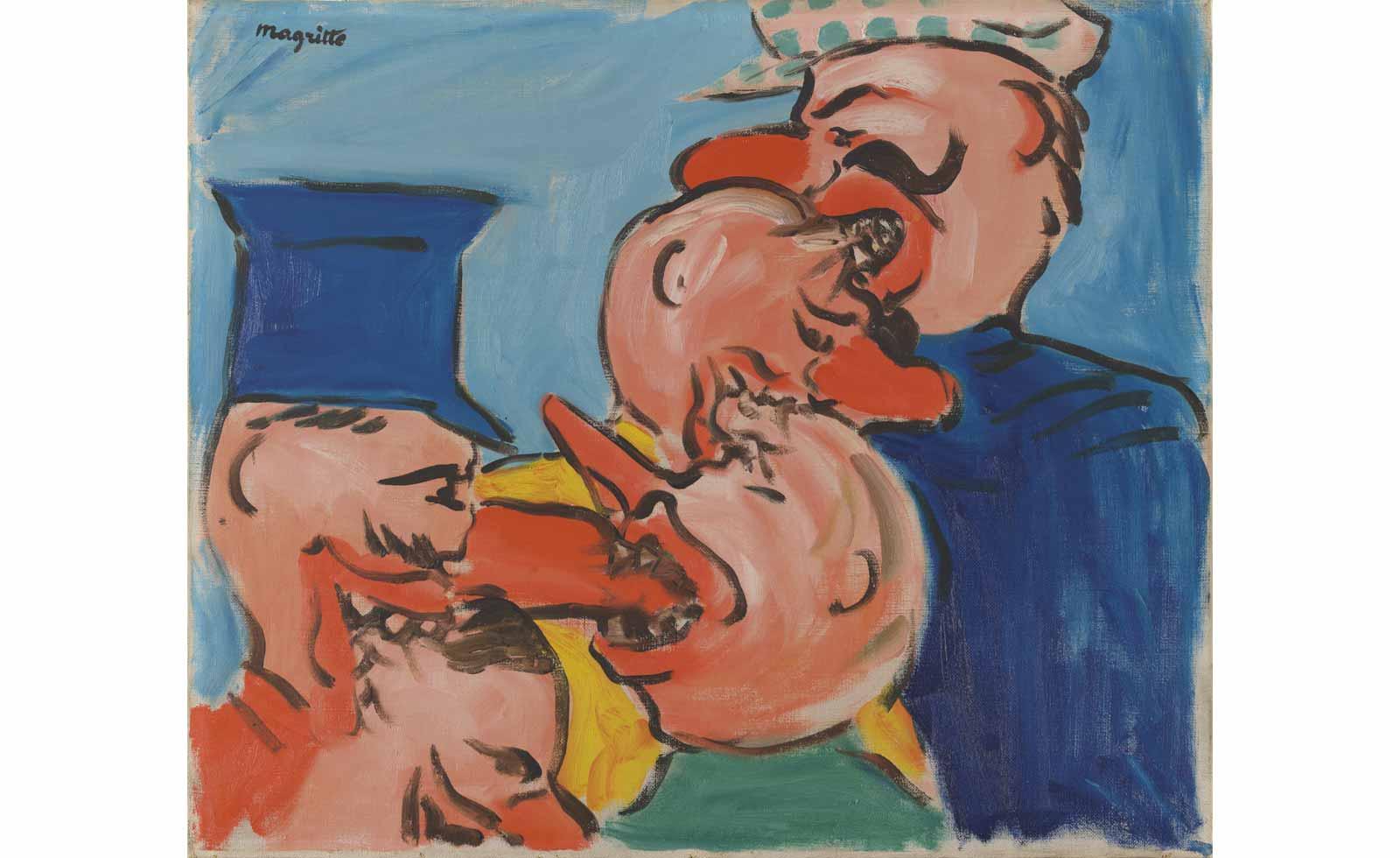 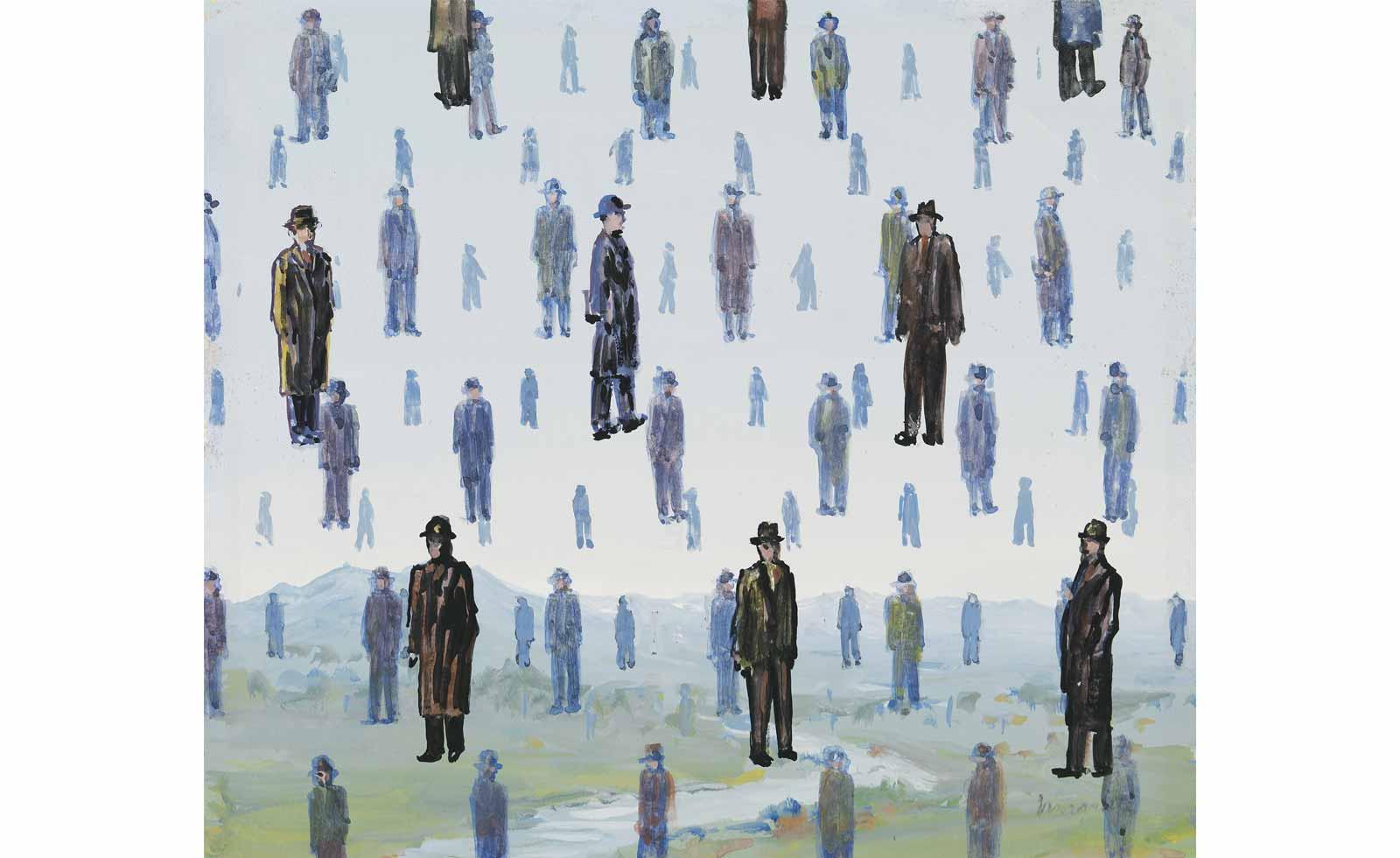 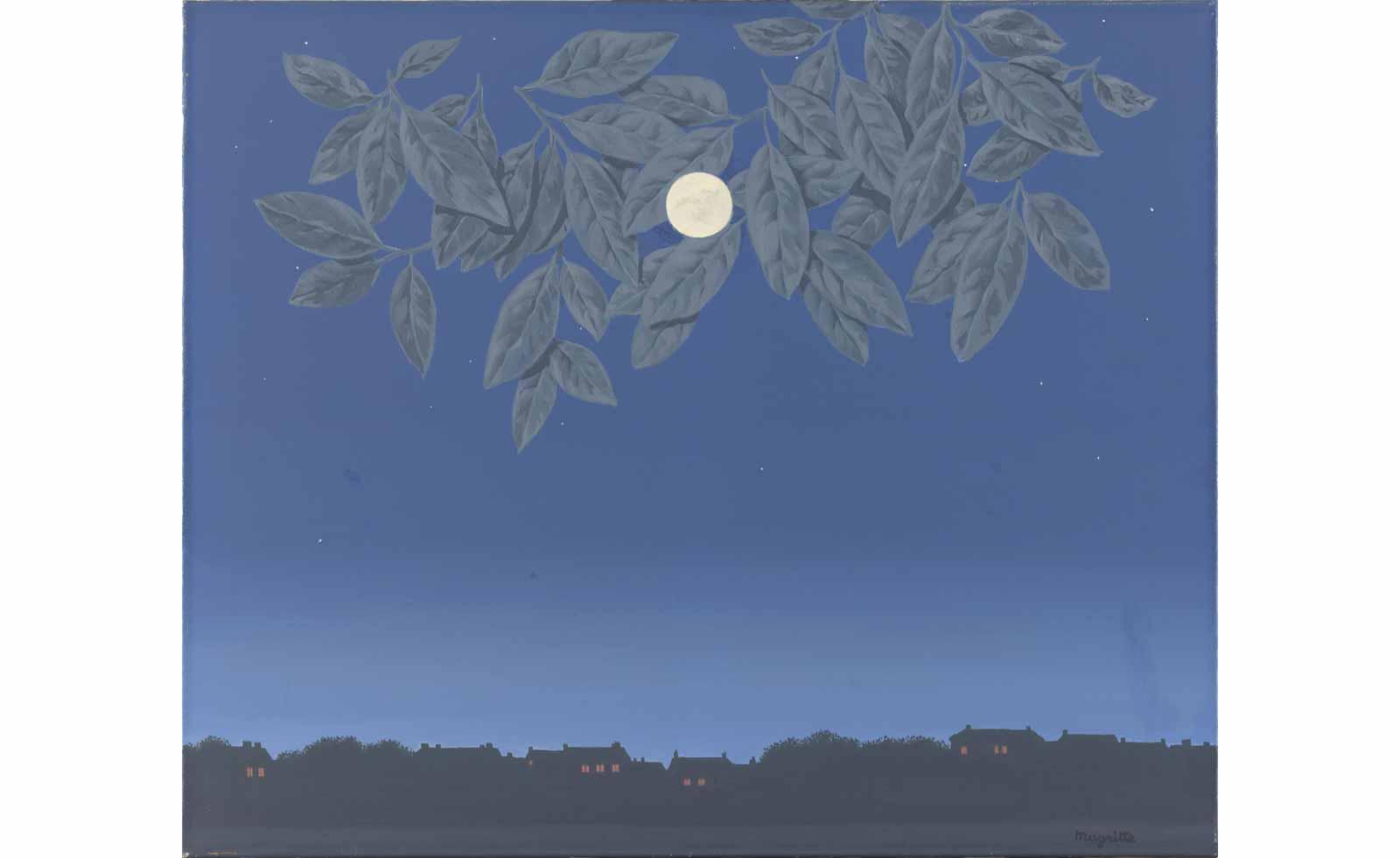 In the 1930s the Surrealists became interested in making sculptural objects—often assemblages cobbled together from disparate parts—and Magritte joined the pack. Appropriating a plaster reproduction of Venus de Milo, he painted the head white, the torso and foot in a flesh tone, the sectioned limbs black, and the drapery covering the legs in an aqua blue—as though the figure is rising up out of the waves. Its title, The Copper Handcuffs, was proposed by André Breton because copper is the corresponding metal to Venus, but it may also allude to the figure’s realistic-looking breasts, onto which Magritte painted reddish-brown nipples.

The 1940 canvas The Return captures a bird in flight through a nighttime sky, but within the silhouette of the winged creature we see bright clouds in the blue heavens of the day to come, just as the eggs in a nest on a windowsill convey the cycle of existence repeating, as they’ll soon bring forth new life. The artist painted a number of variations on this theme, that originally grew out of his 1936 painting Clairvoyance, which drolly depicts him painting a bird while he is looking at an egg.

Annoyed at not being fully embraced by the Parisian art scene, where he had exhibited in group shows but never had a one-person exhibition, Magritte turned an invitation to finally have a solo show at the Galerie du Faubourg in 1948 into an act of rebellion. Denying Parisians of the chance to see the work that they already knew by him, he instead created a whole new body of work, consisting of intentionally bad paintings of vulgar cartoon characters and pastiches of works by James Ensor, Francis Picabia, and Édouard Manet. 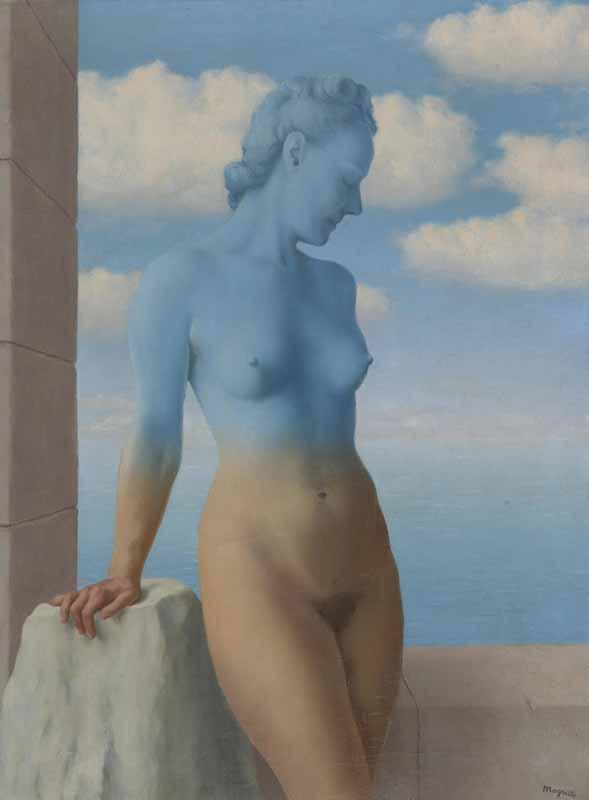 For example, the painting The Famine, which is based on an Ensor picture of two skeletons fighting over a pickled herring, shows a group of drunken bourgeois officials appearing to devour one another, which may have been criticizing the corruption that took place during food shortages of the time or the rivalry amongst artists. Rendered in the vibrant, early modernist styles of Les Fauves and Der Blaue Reiter artists, Magritte’s paintings of this phase, known as the vache (meaning cow in French, but also nasty) period, offended his Surrealist friends, which seems to have been his intention.

Although his prank was successful, none of the vache canvases sold, nor did his paintings from the prior period between 1943 and 1948, when he was making works that he called “Surrealism in Sunlight,” which were painted in the lively Impressionist style of Pierre-Auguste Renoir. He would, nevertheless, return to his old way of painting when he wanted to revisit a past motif, which was the case with the 1945 painting Black Magic. Portraying a female nude, whose head and torso are painted like the sky and lower body painted in the color of sand, the figure in Black Magic simulates a landscape, as if she has become one with nature.

The 1953 picture Golconda, which is one of many important Magritte works in the Menil Collection in Houston, portrays a scene of "raining men" outfitted in overcoats and bowler hats, in a comparable fashion to how the artist dressed. A small gouache on paper at the Magritte Museum portrays the men floating over a rural landscape. It was probably the study for the larger painting, which shows the conformity of characters drifting over a block of suburban houses. The repetition of the figures recalls the representational forms he created when he was designing wallpaper at the start of his career.

Magritte painted nearly twenty different versions of The Empire of Light, with 1954 and 1961 pictures at the museum in Brussels being excellent examples of a house by a lake at night that’s illuminated with a gas light under a cloudy blue sky above. One of his most popular subjects, the contrasting duality of light and darkness also featured in his last completed painting, The Blank Page. Picturing a darkened sky above a group of houses with the glow of city lights at the horizon line, the painting’s trick is that the distant moon is seen in front of the nearby leaves of a tree, which would be impossible.

As Magritte said, “To be a surrealist means barring from your mind all remembrance of what you have seen, and being always on the lookout for what has never been.” This is the power that has kept his work so vital—not just to museum-goers, but to the world of advertising for the past seventy years, starting with the CBS Eye in 1951. Appropriating a circular Shaker design for warding off evil spirits from the side of a Pennsylvania barn and floating it in a clouded sky, the logo had the look of Magritte’s famous 1928 painting The False Mirror, which is also in the collection of the Museum of Modern Art, where CBS founder William S. Paley was a longtime trustee.

That’s not the only Magritte painting to have inspired a commercial brand, the Beatles’ Paul McCartney was a fan of the artist’s work since the 1960s and owned a couple of his notable paintings of apples, which led to the naming of Apple Records in 1968. And in 1976, when Steve Jobs was looking for a name for his fledgling computer company, he took a bite out of his favorite band’s logo and made it his own. 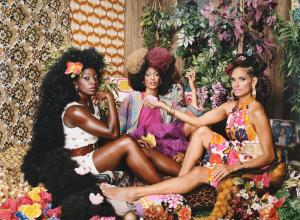 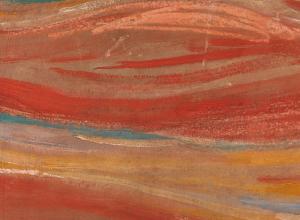 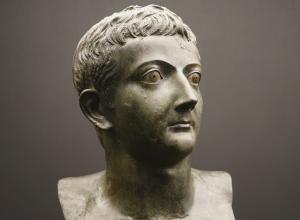 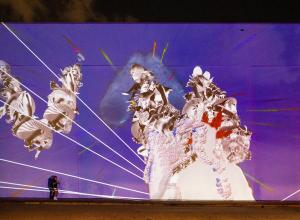