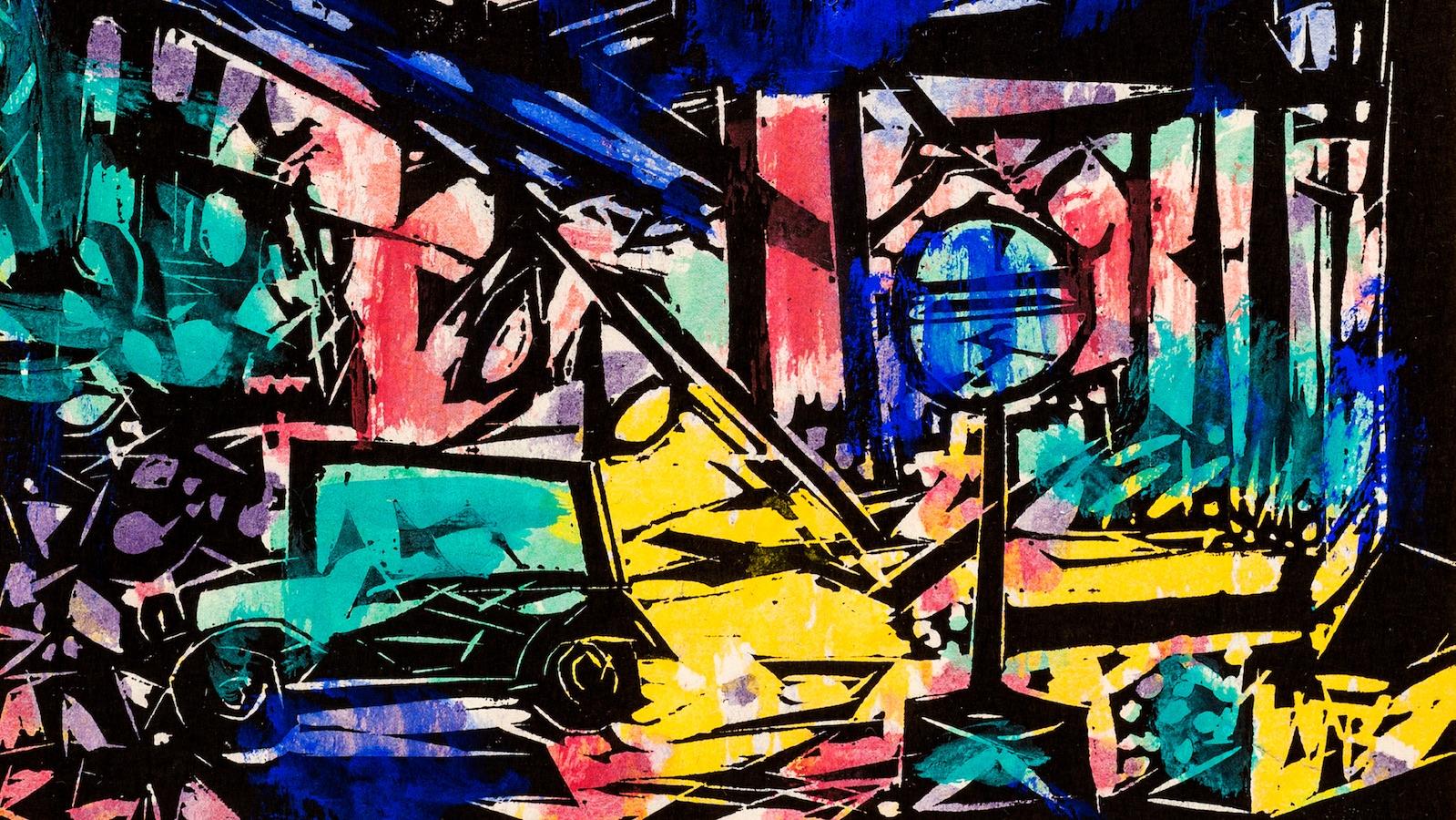 The Japan Society. Photograph by Nicholas Knight and Eline Mul.

Shikō Munakata, detail of Mukō-machi: Crossing Point of Highways, from the Tōkaidō Series, 1964.

New York, NY—Japan Society is pleased to present Shikō Munakata: A Way of Seeing, a new presentation of nearly 100 path-breaking works by the celebrated artist Shikō Munakata (1903–1975). Primarily known for his powerfully expressive woodblock prints in black on white paper, this exhibition reveals the breadth of Munakata’s oeuvre, which spanned from prints to calligraphy, sumi ink paintings, watercolors, lithography, and ceramics and occasionally included a vibrant color palette inspired by the colorful lantern floats in the annual Nebuta Festivals of his native Aomori Prefecture. Organized from Japan Society’s rare collection—the largest Munakata collection in the United States—the installation revisits this imaginative twentieth-century artist.

A highlight of the installation is the complete Tōkaidō Series (1964), a set of sixty-one prints—half in color and half in black-and-white—that depict scenes the artist witnessed while traveling along the historic coastal route between Tokyo and Kyoto. Munakata’s series extends to Osaka, building upon the nineteenth-century ukiyo-e master printmaker Utagawa Hiroshige’s (1797–1858) portrayal of the traditional fifty-three stations. This full set by Munakata will be on view for the first time since 1965.

No matter the medium, Munakata’s artistic explorations were characterized by a spirited curiosity and relentless experimentation. Munakata incorporated diverse sources and inspiration in his dynamic works, including Japanese folk tales, Buddhism, Western literature and poetry, and nature motifs. With his bold, spontaneous, and sketch-like lines, Munakata developed an innovative style that revolutionized the woodblock print medium. Associated with the twentieth-century sōsaku hanga (creative prints) movement and recognized by leaders of the mingei (folk craft) movement of the same era, Munakata expanded the traditional ukiyo-e small-scale format to create large-scale pieces that extend across the full woodblock. His widely acclaimed prints have been awarded internationally, including at biennials in Lugano (1952), São Paulo (1955), and Venice (1956). In addition to a selection of his seminal woodblock prints, this exhibition introduces an important, though lesser-known body of work, including Munakata’s highly regarded calligraphy and paintings.

A major focus of the exhibition underscores Munakata’s first time in the United States, and includes works made expressly for Japan Society as well as works made in New York. The city held particular significance for Munakata.  In 1959, he traveled to New York as a Fellow in Japan Society’s Print Artists Program, which invited artists—including Munakata and Yayoi Kusama—to exchange cultural ideas and build an international dialogue. Based in New York City for his six-month visit, Munakata lectured and held exhibitions throughout the U.S. accompanied by Beate Sirota Gordon (1923–2014), a women’s rights advocate and contributor to the writing of the Constitution of Japan following World War II. Gordon was the founding Director of Performing Arts at Japan Society and she also served as Munakata’s interpreter, ultimately becoming a lifelong friend. Munakata again returned to New York in 1965 under the auspices of Japan Society, and it was then that he donated many of the works that form the core institutional collection today. Other important works by Munakata were given to the Society by Mrs. John D. Rockefeller 3rd at the opening of Japan Society’s building in 1971.

Other works in this exhibition connect thematically to Munakata’s Buddhist influences and recurring motifs, such as owls, hawks, and sunflowers inspired by Vincent Van Gogh—Munakata’s artistic hero. This installation is further enriched by personal ephemera of the artist and two original woodblocks—shown for the first time in the U.S.—for Ten Disciples and Two Bodhisattvas (1939/1948), which complement Japan Society’s rare, complete set of this important artwork. These items are on loan from the Family of Beate Sirota Gordon, researcher and Munakata’s granddaughter Yoriko Ishii, and the Munakata Shikō Memorial Museum of Art in Munakata’s native Aomori.

Original exhibition design is by New York-and-Barcelona based MAIO who provide a fresh, complimentary display that uses the artworks themselves to define the exhibition space and viewing experience. “Shikō Munakata created his artworks from an unusual closeness. A visual impairment made him work with his eyes just inches from the woodblock, thus focusing on specific areas and details more so than the whole, a fact that reinforces even more the haptic nature of the works,” says MAIO.” The exhibition display aims to restitute this feeling of closeness, while playing freely with reinterpreted techniques and concepts, such as urazaishiki (back-coloring) or zakki (a set of ordinary elements) to bring a new perspective to the broad corpus of his works.”  Shikō Munakata: A Way of Seeing is organized by Japan Society and curated by Tiffany Lambert, Curator, Japan Society.