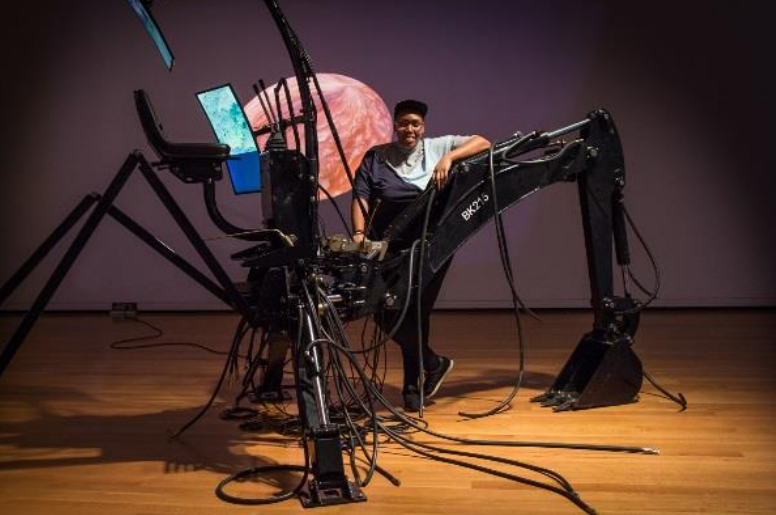 Installation view of Sondra Perry: Eclogue for [in]HABITABILITY at the Seattle Art Museum.

Perry has already made a mark in Seattle; her video Double Quadruple Etcetera Etcetera opened SAM’s exhibition Disguise: Masks and Global African Art (June 18–September 7, 2015). With Eclogue for [in]HABITABILITY, Perry creates an immersive mixed-media installation. A refurbished backhoe sits in the center of the gallery, surrounded on three sides by video projections using layers of images from a host of sources, including the artist’s own archive, drones, and the internet. With the imaginative qualities of science fiction, the installation highlights the precarious relationship between people and place, drawing connections between humankind’s continued transformation of land and the racialization and gentrification of bodies, technology, and physical spaces.

In addition to this solo exhibition, staged in the museum’s Gwendolyn Knight & Jacob Lawrence Gallery, Perry received a $10,000 award to further her artistic practice.

The exhibition is curated by Sandra Jackson-Dumont, Frederick P. and Sandra P. Rose Chairman of Education at the Metropolitan Museum of Art and SAM’s former Deputy Director for Education and Public Programs/Adjunct Curator in Modern and Contemporary Art.

New Jersey-based video installation and performance artist Sondra Perry has exhibited in group shows at MoMA PS1, Seattle Art Museum, Brooklyn Museum, and The Studio Museum in Harlem, and has participated in residencies at the Skowhegan School of Painting and Sculpture and the Experimental Television Center. Perry holds an MFA from Columbia University and a BFA from Alfred University. For more information, visit sondraperry.com.

SAM’s Gwendolyn Knight and Jacob Lawrence Prize is awarded biannually to an early career black artist who has been producing work for less than 10 years.