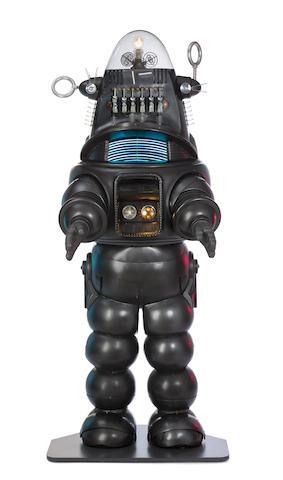 Robby the Robot suit and Jeep from Forbidden Planet, 1956

New York – Robby the Robot, the seven-foot tall robot from the science fiction classic Forbidden Planet (1956), sold at Bonhams New York for a world record price of $5,375,000 in the TCM Presents... Out of This World! auction of classic movie memorabilia.

"This is an out-of-this-world result for one of the most loved items in movie history," said Dr. Catherine Williamson, the Director of Entertainment Memorabilia at Bonhams. "Robby the Robot is one of those symbols of American culture that is embedded in our DNA. We are thrilled for the consignor, William Malone, who has cared for Robby for so many years and we are delighted that so many of Robby's fans took the once-in-a-lifetime opportunity to see him at Bonhams."

The saleroom at Bonhams Madison Avenue was packed, but the bidding activity was all on the phones. A four-way battle ensued, with the bids at one point leaping from $3.6 million to $4 million, before Robby—and his Jeep—finally sold for $5,375,000.

The stellar result means that Robby has knocked the then-previous world record holder—the Maltese Falcon—off its perch. In 2013, Bonhams Entertainment Memorabilia Department made history in New York, selling the Maltese Falcon statuette from the cinema noir classic of the same name for $4 million, then a record price for a movie prop at auction (non-automotive). The 12-inch-tall Falcon was the star of the Bonhams inaugural film history sale with partner Turner Classic Movies (TCM).

With this result, Robby the Robot now becomes the most valuable movie prop ever sold at auction.

Robby's previous owner, filmmaker and collector, William Malone, who brought the robot to auction, said, "I'm astounded by the result, but also sad to part with him. However, it's time Robby finds a place where he can be displayed, and with someone who can look after him. Of course, he will leave an empty spot in my house—and in my heart."

Robby the Robot and Forbidden Planet

One of the most iconic sci-fi figures to appear on the silver screen, seven-foot tall Robby the Robot captured the imagination of audiences everywhere in Forbidden Planet as the devoted servant to Professor Morbius, one of the few inhabitants of the distant planet Altair IV. Conceived and built by a team of MGM designers for the 1956 film, including Mentor Huebner and Robert Kinoshita, Robby's groundbreaking appearance broke away from earlier clunky "tin-can" designs for movie robots.

As Williamson said, "Robby the Robot is, simply, the heart of Forbidden Planet, the moral center of the film, as well as the key narrative device."

The broadcaster and film critic, Matthew Sweet, writing in Bonhams Magazine, described Robby the Robot as "thrilling. As a character, he carries the weight of history and a hint of the future."

The fully-functional prop breaks down into 3 pieces: the head, the torso, and the legs. In addition to Robby himself, the lot also included the Jeep he drives on Altair IV, the auxiliary control panel, and his original MGM packing crates.

As Dr. Williamson said, "This is the fifth year we have partnered with TCM to present auctions of movie memorabilia, and each year the demand only increases. It shows how important these props and costumes are to everyone throughout the world."