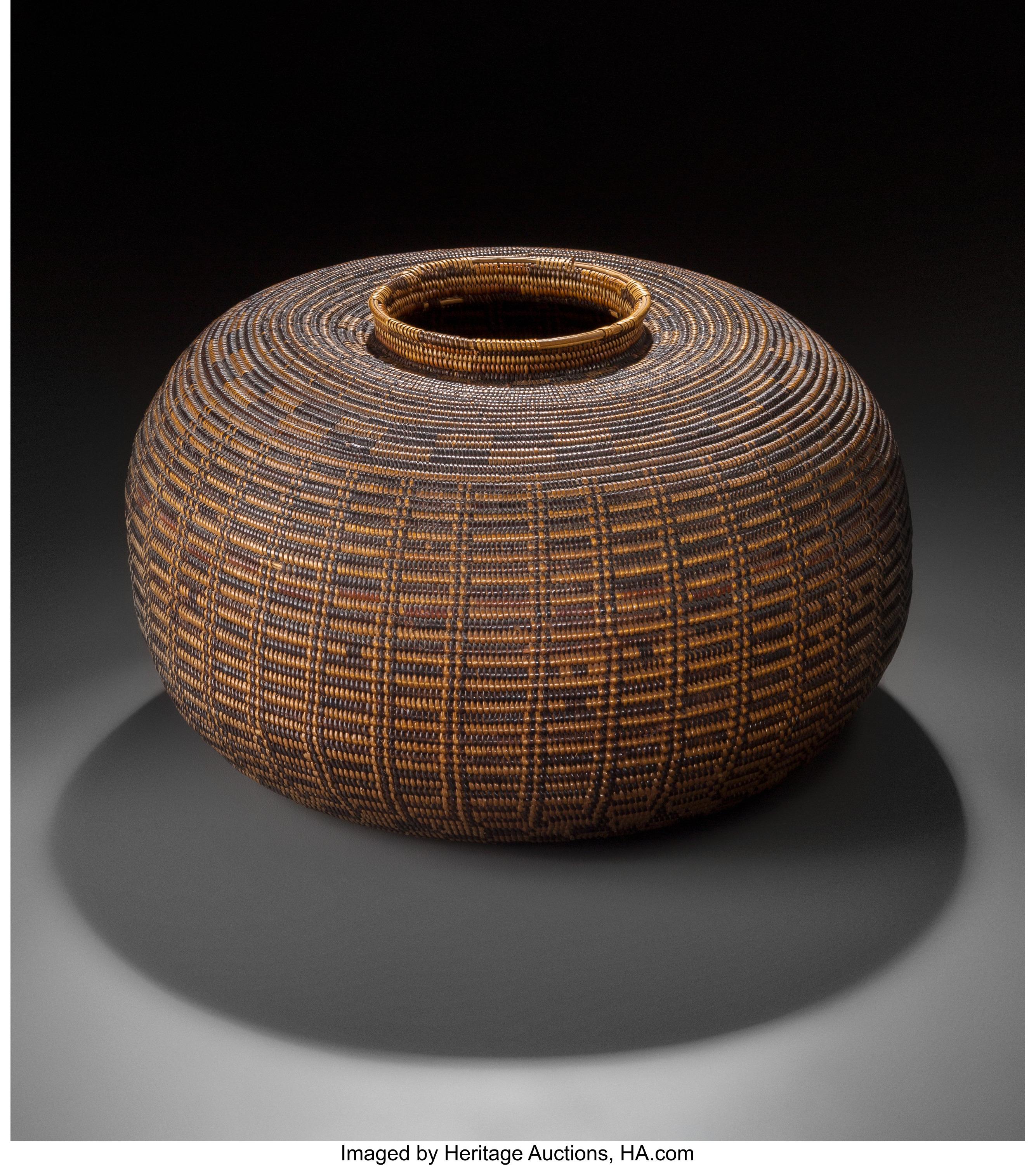 DALLAS, Texas (Nov. 15, 2017) — A collector who traded a pair of "old Texas spurs and a few dollars" for a brown basket, which sat on his TV stand for 25 years, is $55,000 richer. Native American art scholars discovered the basket was actually an extraordinarily rare Coiled Jar made by a member of the Chumash Tribe in the 1700s. The bowl was one of the top sellers in a recent auction of high-end American Indian Art held by Heritage Auctions in Dallas.

About 25 years ago, collector Dr. James Bryan was shopping at an antiques mall in central Texas where people bought and sold — and sometimes traded — an almost limitless array of goods. Bryan was drawn to a tightly woven basket, which drew his attention repeatedly.

"I just admired it," Bryan said. "That one and another similarly woven Indian bowl – I really liked them. It just struck me as being such a beautifully woven basket. That just drove my attention to it. I [recane] chair seats, and understand the intricacies of creating a pattern, and repeating a pattern in such a tight space is amazing to me.

"So I traded [the seller] a pair of old Texas spurs and a few dollars for it."

Bryan admitted that he had no idea what he had acquired. He view it as a collectible. "It sat on a TV stand for about the next 25 years," he said. "Occasionally, we would dust it. That's it."

The collectible turned out to be a centuries-old basket handcrafted by a member of the Chumash, a people who historically have lived on the California coast. The 10-1/2" diameter jar is fashioned from natural and dyed juncas and sumac plants.

A retired dentist who lives outside of Waco, Texas, Bryan has been a collector of sorts throughout his life. He remembers one of his first buys, a pewter saltshaker he acquired at age 9 "because I could only afford one." He recently decided to part with some of his Indian art at the urging of his wife, who asked him to thin out some of his collections.

"I had some 19th-century Indian leather pieces that recently had cropped up in my wonderful materials which I showed to Heritage Auctions," he said. "When interest was expressed in the leather goods, I asked if baskets would be of any interest. Bryan showed the basket to Delia Sullivan, Heritage Auctions' Senior Specialist and Consignment Director-Ethnographic Art, who was excited to see pictures of the basket.

"She said it turns out it's a Chumash basket, probably from the 18th century, and might be worth $25,000," Bryan said. "You could have knocked me over with a feather."

As it turns out, that estimate was conservative. Bryan consigned the basket into Heritage's Ethnographic Art: American Indian, Pre-Columbian & Tribal Jewelry Auctionand watched as five bidders drove the final price all the way to $55,000.

Bryan was, understandably, thrilled with the result, but his celebration was understated and grounded.

"I was at the Baptist General Convention in Waco," Bryan said. "I showed it to a total stranger and said, 'doesn't God work in interesting ways?' He just smiled and said, 'Amen!'"

Learn more about this rare object at auction.