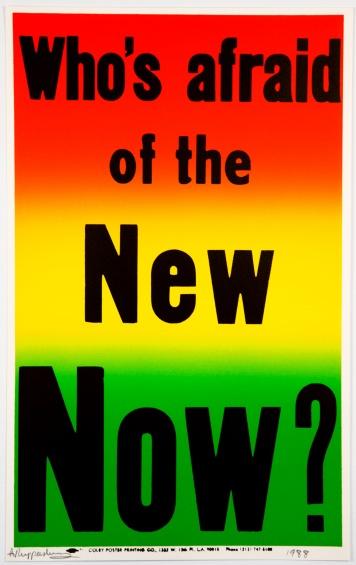 New York, NY- On December 2 and 3, the New Museum will celebrate its fortieth anniversary with “Who’s Afraid of the New Now? 40 Artists in Dialogue to Celebrate the New Museum’s Anniversary.” Borrowing its title from an artwork of the same name by Allen Ruppersberg— who had his first New York survey at the New Museum in 1985—the event features a selection of artists whose exhibitions, works, and interventions have shaped and transformed the identity and history of the New Museum. Engaging in dialogue with each other, the forty artists will discuss an array of topics related to their practice, their history with the Museum, and beyond. The event is organized by Natalie Bell, Assistant Curator; Gary Carrion-Murayari, Kraus Family Curator; Helga Christoffersen, Assistant Curator; Massimiliano Gioni, Edlis Neeson Artistic Director; and Margot Norton, Curator.

Each conversation will be a ticketed event, at a cost of $5 per conversation, with tickets available for purchase via the New Museum website: Saturday tickets and Sunday tickets. The full schedule of talks is as follows:

Throughout the weekend, the Museum will be open with extended hours from 10 a.m. to 8 p.m., and will offer free admission to the Museum’s celebrated lineup of exhibitions, including “Trigger: Gender as a Tool and a Weapon,” “Kahlil Joseph: Shadow Play,” “Petrit Halilaj: RU,” “Helen Johnson: Ends,” “Alex Da Corte: Harvest Moon,” and “Pursuing the Unpredictable: The New Museum 1977–2017.” On the occasion of its anniversary, the New Museum will also reinstall Bruce Nauman’s iconic video No, No New Museum (Clown Torture Series) (1987) in the Museum’s window, just as the work was originally presented during Nauman’s solo exhibition at the Museum in 1987.

The New Museum is the only museum in New York City exclusively devoted to contemporary art. Founded in 1977, the New Museum is a center for exhibitions, information, and documentation about living artists from around the world. From its beginnings as a oneroom office on Hudson Street to the inauguration of its first freestanding building on the Bowery designed by SANAA in 2007, the New Museum continues to be a place of experimentation and a hub of new art and new ideas.