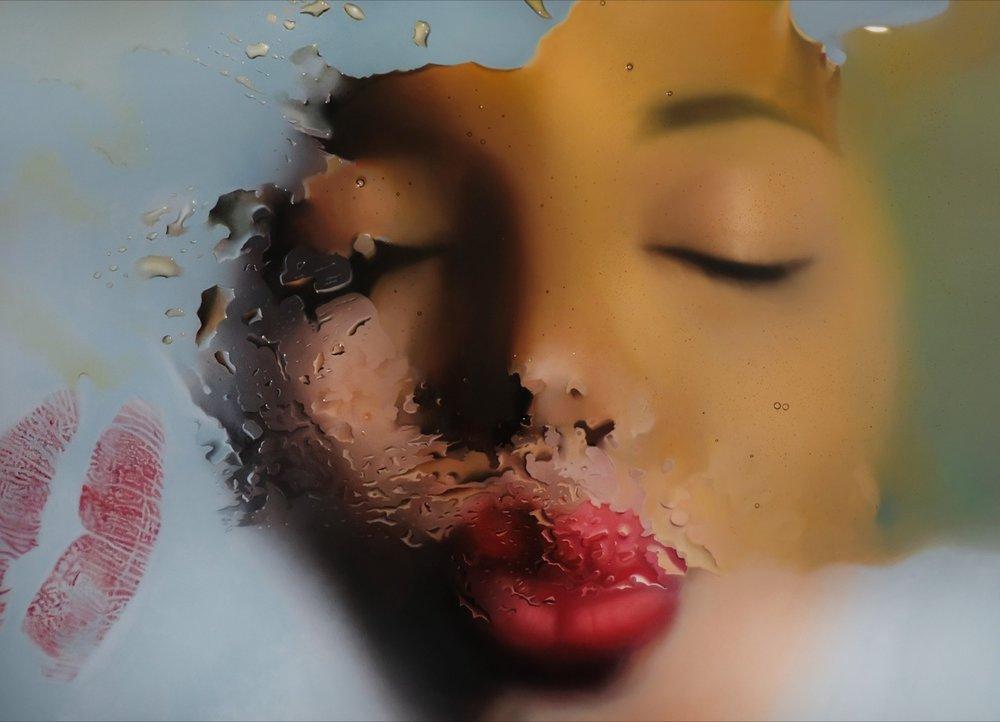 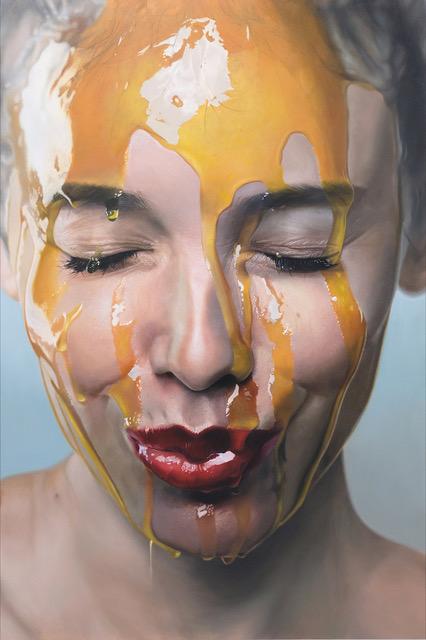 The exhibition, REFLECTION OF DREAMS consists of seven new large-scale and two new small-scale oil paintings, including new portraits of women gazing into mirrors and Dargas’ favored subject of flowing honey and chocolate over female faces.

Mike Dargas’ hyperrealistic style is at once provocative and sensual, creating a sense of immediacy that is textured and visceral. But a deeper look at his work reveals a fascination with intimacy, a kind of personal and private experience, conjured by an inflaming of the senses.

Dargas explains that he sees honey as a vehicle for uncovering truth and authenticity. He also looks to it as a healing substance, something that represents self-love as well as love for others. His work, though extremely sensual, goes past the erotic, towards a reinvigoration of innocence, genuine emotion and sacredness. In the works where women are drenched in sticky substances, the liquid becomes a mask that covers the model’s face, but simultaneously seems to reveal and uncover an authentic expression, as though the vulnerability of being unable to see with one’s eyes allows for the exposure of human emotion. The liquid forms also allow Dargas to show off his skillful technique and demonstrate meticulous attention to detail.

In all his paintings, the artist frequently puts an obstructive layer between his subjects and the viewer. Whereas in the past, he has used honey and chocolate, in this new series, he now experiments with mirrors, water and steam to separate the viewer from the models, so they are always just out of grasp. 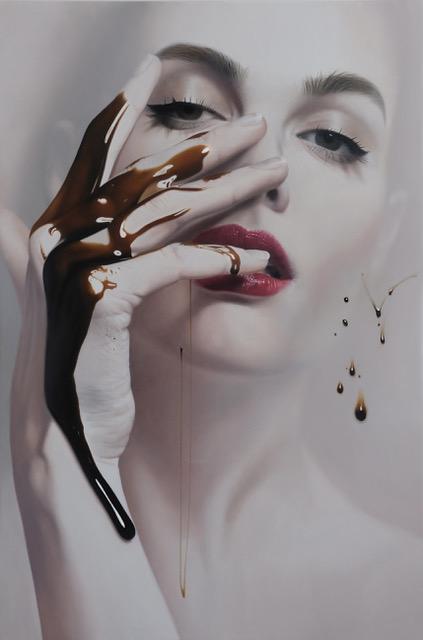 Self-awareness and love are also major themes with Dargas’ newest body of work. By drawing on a digital generation obsessed with perfection, the figures critique the contemporary aesthetic ideal. Some of the figures kiss themselves in mirrors, subjugating the viewers’ gaze as they look at themselves. In the portraits that are face on, the model seemingly confronts the viewer. On closer inspection, the third wall is a mirror, and thus the model’s intense stare is only aimed at herself. The subjects frequently appear lost in thought, providing an opportunity for the viewer to project their own feelings onto them, and as the title suggests, reflect on their dreams.

Alongside the solo exhibition of Dargas’ work will be a large group show of diverse artists from Field Projects, as part of C24’s ongoing series of partnerships with non-profit and artist-run arts organizations dedicated to promoting underrepresented work.

About Mike Dargas
Mike Dargas (b. 1983) was born in Cologne, Germany. Inspired by artists such as Dali, Caravaggio and H.R. Giger, Dargas studied various painting techniques since his early childhood when he developed a passion for realism, which over the years has developed into hyper-realism. He attracted attention at age eleven recreating old master paintings with pastel and chalk on the pavement in front of Cologne Cathedral. Shortly after, Dargas graduated in his youth from an adult art class after eighteen months. Through these classes coupled with independent study, Dargas learned and honed different techniques in painting and three-dimensional art. He started doing tattoos from the age of fourteen and made quite a reputation out of it, receiving numerous awards and prizes. Dargas has exhibited internationally throughout Germany, Belgium, London, Spain, Turkey, and Austria. His works are included in numerous private collections and have been featured in international art fairs such as Contemporary Istanbul, Art Miami, Stroke, and Art New York. Dargas is represented in New York by C24 Gallery.

About C24 Gallery
C24 Gallery was established in 2011 in Chelsea, New York, and is committed to showcasing contemporary art with an emphasis on exhibiting both established as well as underrepresented artists. C24 Gallery artists regularly participate in museum exhibitions and biennials and are included in leading institutional collections worldwide. In addition to an ambitious exhibition program, which includes collaborations with non-profit and artist-run arts institutions, C24 Gallery regularly hosts artist talks and lectures, and produces catalogues and artist books. Each year the gallery participates in major art fairs all around the world.