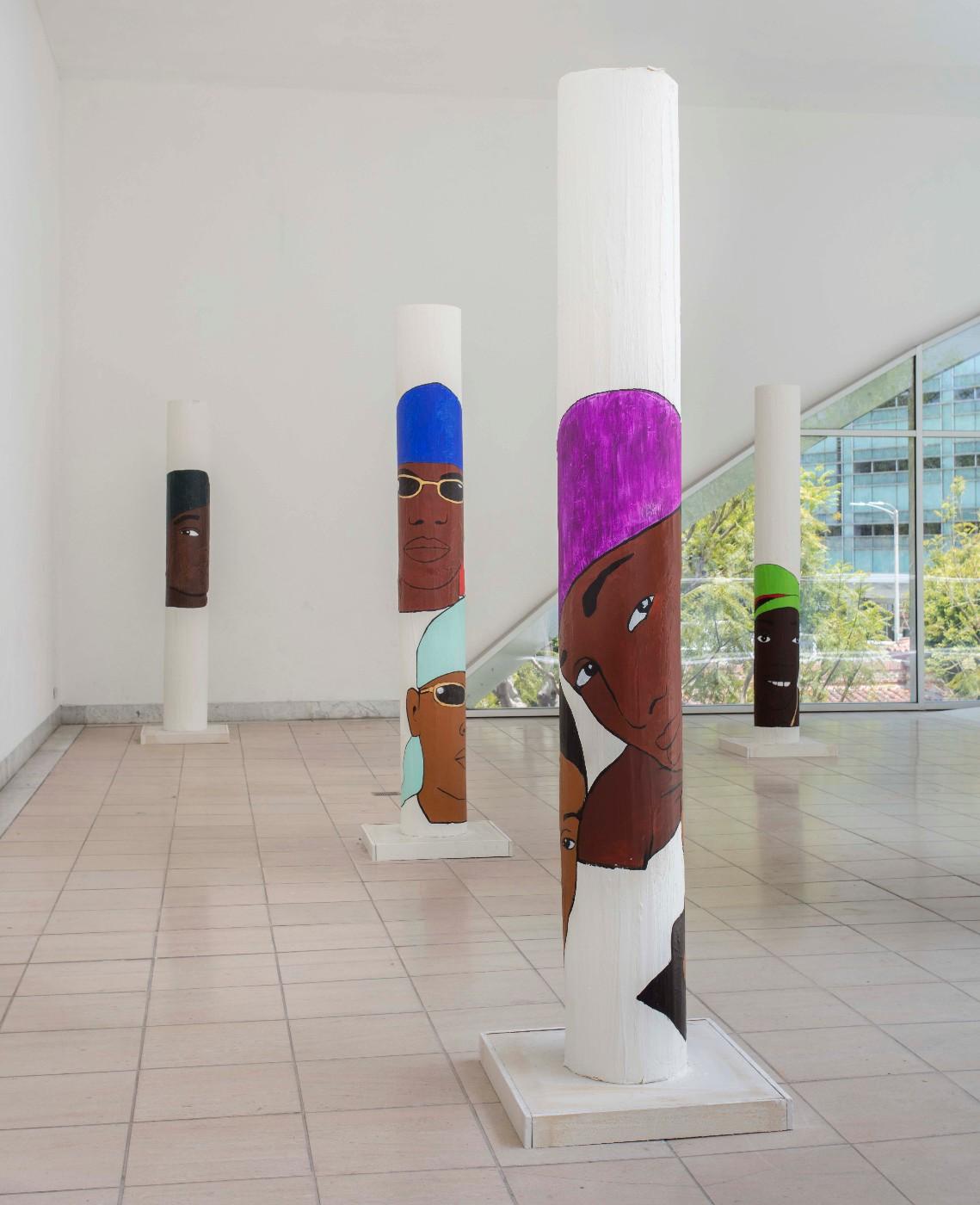 (Los Angeles, CA)—The Hammer Museum today announced that artist Lauren Halsey will receive the $100,000 Mohn Award honoring artistic excellence. Since 2012, the Mohn Award is given in conjunction with the museum’s biennial, Made in L.A., organized this year by Hammer curators Anne Ellegood and Erin Christovale. As part of the Mohn Award, the museum will also produce a monograph of Halsey’s work.

Additionally, Daniel Joseph Martinez will receive the Career Achievement Award honoring brilliance and resilience; and EJ Hill will receive the Public Recognition Award, as chosen by visitors to the Made in L.A. 2018 exhibition. Both artists will receive $25,000.

“Lauren Halsey’s ambitious sculpture is impressive as a site-specific installation at the Hammer and as a prototype for her upcoming public artwork in the South Central community. The Mohn Award recognizes her distinctive iconography and community-building vision,” said Ann Philbin, Director of the Hammer Museum. “Daniel Joseph Martinez has been active for decades as both artist and teacher, and the Career Achievement Award celebrates his contributions to the Los Angeles art community. Our visitors responded strongly to EJ Hill’s moving durational performance and immersive installation. We are thrilled to distinguish all three of these formidable artists and their work.”

All three awards were once again funded through the generosity of Los Angeles philanthropists and art collectors Jarl and Pamela Mohn and the Mohn Family Foundation as part of Made in L.A., the Hammer’s biennial exhibition series highlighting emerging and under-recognized artists from the Los Angeles region. The exhibition is on view through September 2, 2018.

The Public Recognition Award was determined by visitors to the Hammer Museum’s Made in L.A. 2018 biennial between June 3 and August 19, 2018. More than 70,000 people visited the exhibition in that time period. During their visit, audiences were encouraged to vote for their favorite artist in the biennial.

“The spaces Lauren Halsey invites us into are fantastically futuristic and historically rooted celebrations of the real life experiences of her friends, family, and neighbors who stay in the iconic neighborhood of South Central L.A., where she grew up and still works,” stated Thomas J. Lax. “Lauren’s installations are prompts for people to come together, both in the space of the museum where she observes, mourns, and celebrates the friends and neighbors who come in and out of the work, and in the middle of the city where daily life sustains this historic community.”

“Daniel Joseph Martinez has had a tremendous impact on several generations of artists in Los Angeles, and has helped to shape the development of the art scene through his involvement in seminal art spaces in the city. He is an artist whose work and discourse are always profound, always question, and always push at the edges, whether it is through interrogations of power dynamics, global politics, or the nature of being. He is tremendously deserving of this award, and it is so wonderful to celebrate him at this moment,” wrote Pilar Tompkins Rivas.

“EJ Hill’s work best embodies, in the most literal sense, a theme we saw echoed throughout the biennial—the incredible human capacity for resilience,” said Liz Munsell. “His stunning act of duration points to the systemic stacking of the odds against queer, black, and brown bodies while addressing the institutions that structured his upbringing. By externalizing his personal experiences, he has provided the public with a collective forum for release and growth. Clearly the generosity of his performance resonated with the communities of Los Angeles and beyond.”

About the Award Recipients

Lauren Halsey (b. 1987, Los Angeles, California) was born and raised in Los Angeles, and received her MFA from Yale University and her BFA from California Institute of the Arts. Her practice considers the relationship between architecture and community-building in urban centers and beyond. For Made in L.A. 2018, she created a prototype for what she calls The Crenshaw District Hieroglyph Project, which, when completed, will be realized in a public space on Crenshaw Boulevard that formerly held an African bazaar, which she frequented as a child. Halsey has created a functional space built of plywood and gypsum, a mineral that has been used major structures for thousands of years, including in the pyramids of Ancient Egypt. Sampling and reinterpreting ancient hieroglyph writing, Halsey has individually inscribed every panel on the main structure with signifiers of her community and neighborhood of South Central. The structure stands as a dedication to and record of the area, which is currently undergoing a major transition, as mass development and new residents restructure the local economy and neighborhood. Halsey hopes the future, permanent structure will become a communal space in which locals can gather and hold public events as a testament to not only surviving but thriving in an everevolving city. 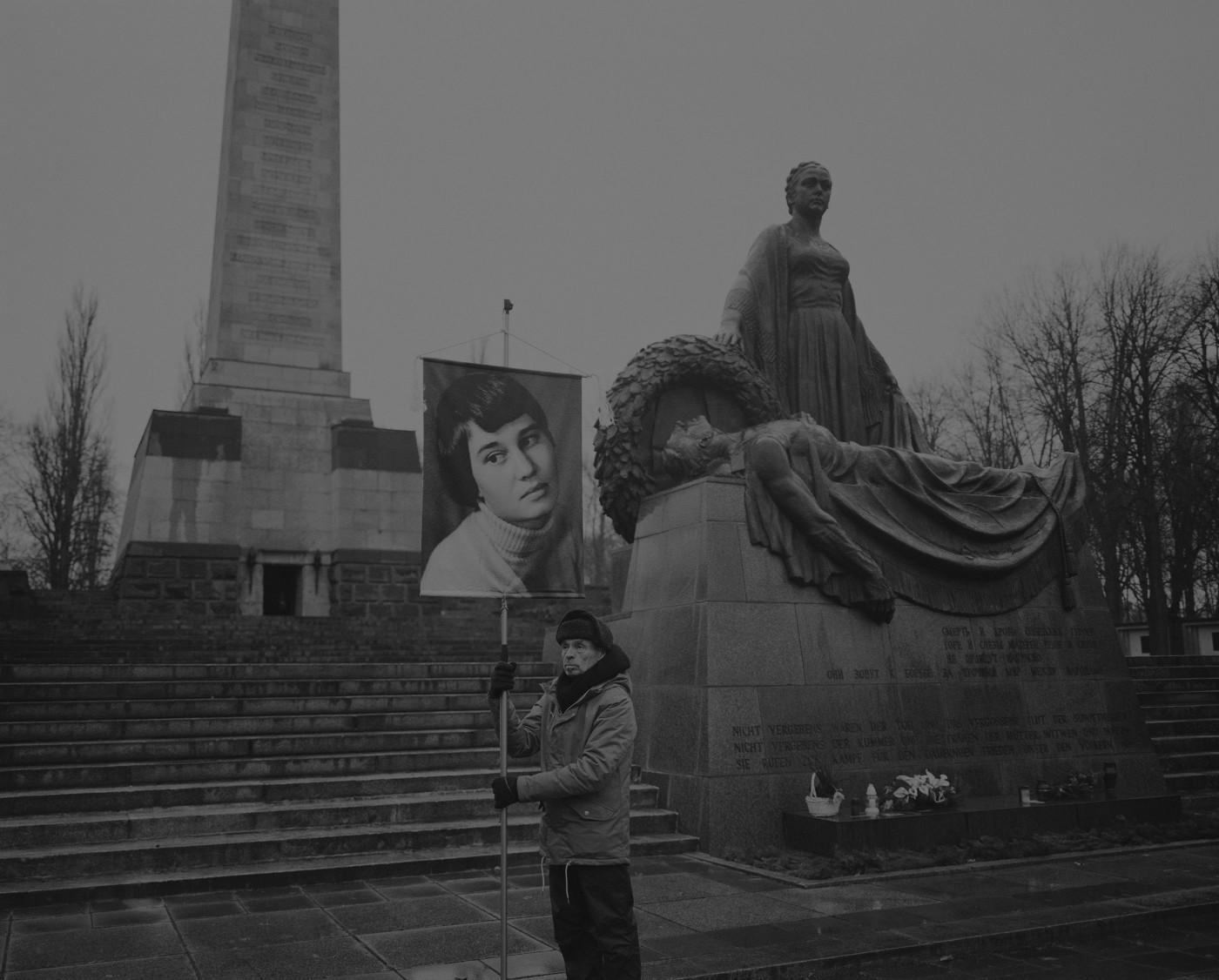 Daniel Joseph Martinez, The Soviet memorial park in the district of Schönholz. The Soviet War Memorial in Schönholzer Heide (German: Sowjetisches Ehrenmal in der Schönholzer Heide) in Pankow, Berlin was erected in the period between May 1947 and November 1949 and covers an area of 30,000 m?. The memorial contains the biggest Soviet cemetery in Berlin, which is also the biggest Russian cemetery in Europe outside of Russia., 2017

Daniel Joseph Martinez (b. 1957, Los Angeles, California) received his BFA from California Institute of the Arts in 1979. Martinez cofounded Deep River and LAXART, both in Los Angeles. He is Donald Bren Distinguished Professor of Art at the University of California, Irvine. His practice takes up such issues as the relationship between individual and collective identity, socially prescribed categories that serve to oppress the most vulnerable in our society, and state sanctioned violence, and he works across media, including sculpture, photography, prints, sitespecific interventions, and installations. Made in L.A. 2018 features eight photographs from a recent body of work titled I am Ulrike Meinhof or (someone told me time is a flat circle). For this series, Martinez visited numerous sites along the 103-mile border between the former East and West Berlin, where the Berlin Wall once stood, and held up a banner featuring a portrait of Ulrike Marie Meinhof, the German left-wing militant and cofounder of the Red Army Faction, who was later arrested and died in prison. The artist’s exploration of this pivotal period in Europe is a reminder to heed the lessons of the past at an unprecedented time in American history, in which threats to democracy loom large. 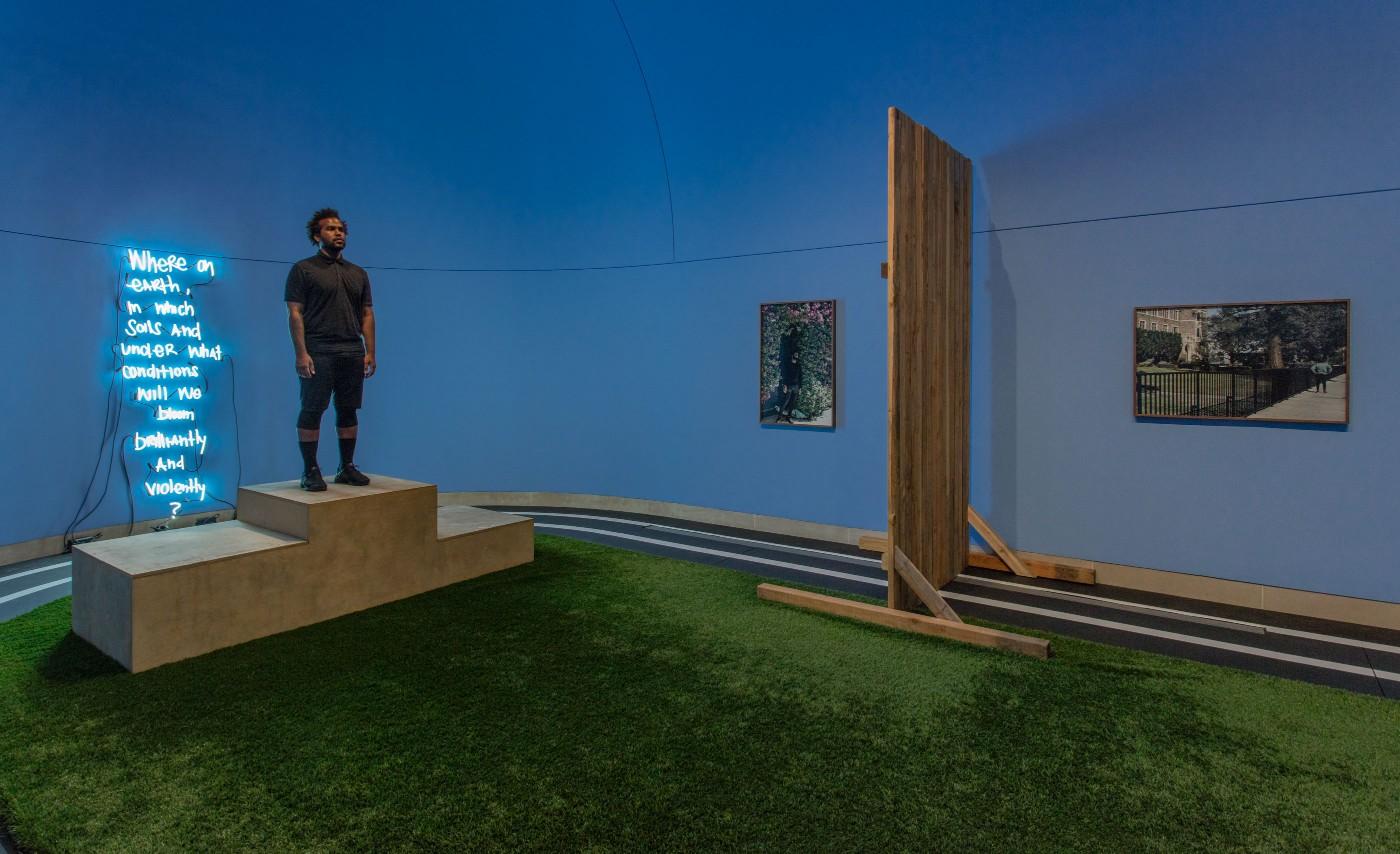 EJ Hill (b. 1985, Los Angeles, CA) received his MFA from the University of California, Los Angeles and his BFA from Columbia College, Chicago. At the core of his practice is a form of durational performance that reflects both the hardships that certain bodies are forced to endure and the enormous resilience of those bodies. Hill insists that we look at how our society’s deeply held prejudices and inequalities continue to render black, brown, and queer bodies the targets of violence. Through writing, painting, sculpture, and performance he remains committed to providing visibility for those who have been ignored or disregarded and to affirming experience. For Excellentia, Mollitia, Victoria, his contribution to Made in L.A. 2018, Hill visited six of the seven schools he attended in Los Angeles—from preschool to community college—and ran around each of them. He describes these runs as “victory laps,” and each run is an act of reinserting his body into places foundational in his development as well as a process of unlearning the lessons that have conditioned his thoughts and his behaviors. Resembling a school running track, the installation includes photographs documenting each of the six runs as well as several sculptures related to competition and recognition.

Jarl and Pamela Mohn are art collectors committed to supporting emerging L.A. artists. Professionally, Jarl Mohn is president and CEO of NPR since July 2014. Prior to that Mohn divided his time between being a corporate director and advisor to a number of media companies, making direct early stage angel and seed investments in digital media/technology ventures, and managing The Mohn Family Foundation—the philanthropic entity that he and his wife created in 2000. In addition to supporting arts initiatives, the Mohn Family Foundation funded the Mohn Broadcast Center for KPCC, a significant contribution to Public Radio in Southern California. Mohn is the former chair of the ACLU Foundation of Southern California, and the former chair of The Annenberg School at USC. Previously he was the founding president and CEO of Liberty Digital, a public company that invested in the internet and digital media. Prior to Liberty Digital, Mohn created E! Entertainment Television serving as its president and CEO from January 1990 to December 1998. Mohn was formerly executive vice president and general manager of MTV and VH1 from 1986 to 1990 where he led the transformation from music videos to long form programming. Prior to his career in television, Mohn had a 19-year career in radio. He began as a disc jockey and rose through the ranks as a programmer, general manager, and then owner of a group of radio stations. Originally from Doylestown, Pennsylvania, Mohn attended Philadelphia’s Temple University where he studied mathematics and philosophy. He currently lives in Brentwood with his wife. Jarl and Pamela Mohn's commitment to the awards extends through the first five cycles of Made in L.A. with the option to continue beyond.

Tags
Hammer Museum of Art
contemporary art
Made in L.A.