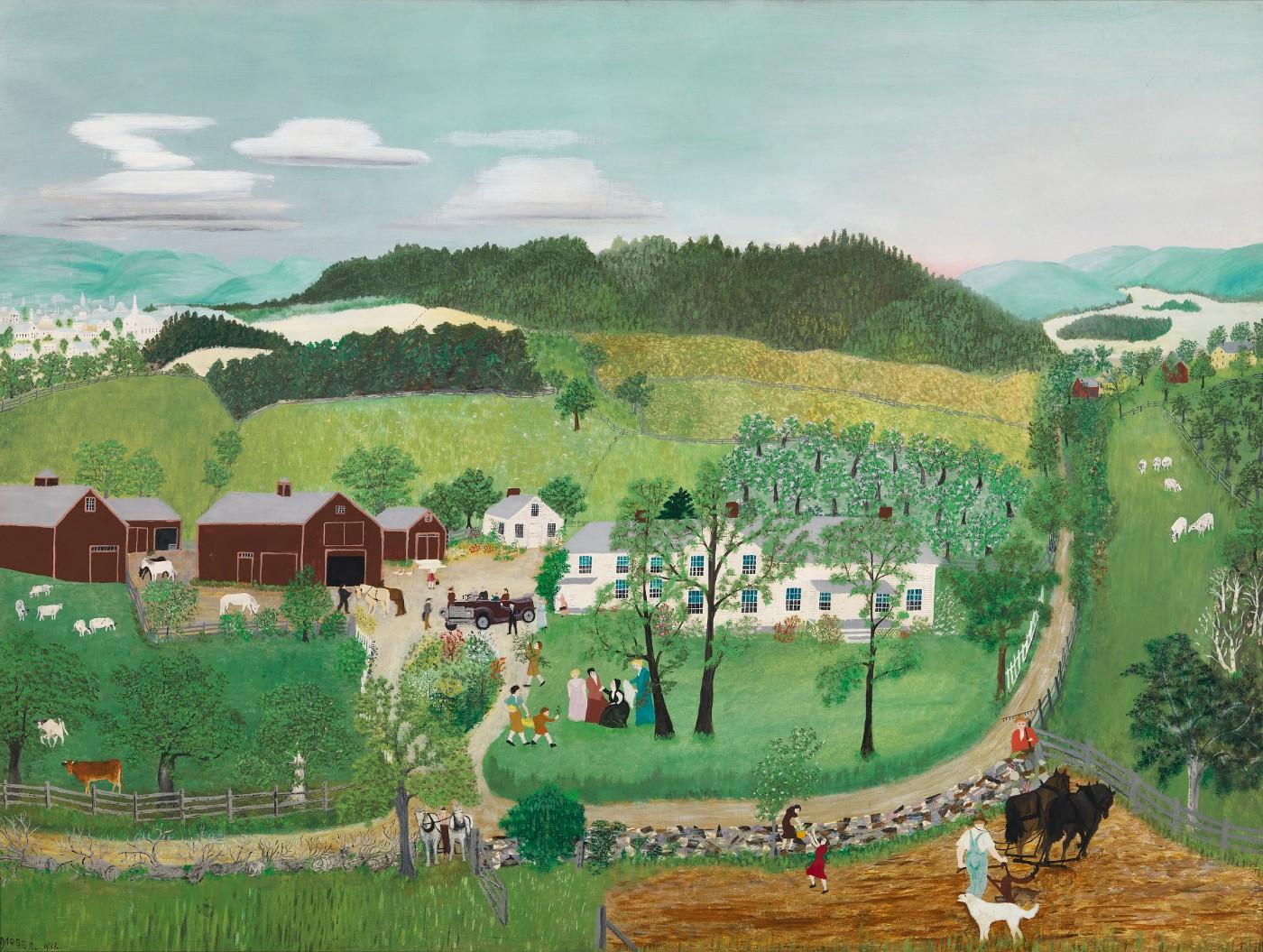 NEW YORK, March 27, 2018 — Jane Kallir, Co-Director of The Galerie St. Etienne, announced a major donation of paintings by Anna Mary Robertson “Grandma” Moses to the Smithsonian American Art Museum (SAAM) in Washington, D.C. Over the course of the next seven years, 10 masterworks will be donated by Kallir and her family in memory of Otto Kallir.

The Kallir gift begins with three paintings: Out for Christmas Trees, 1946; Grandma Moses Goes to the Big City, 1946; and Turkeys, 1958, the first two of which are currently on view at the Smithsonian American Art Museum. The remaining seven works are in the process of being selected. All 10 will be among the highlights of a travelling “Grandma” Moses exhibition, set to begin at SAAM in the fall of 2023. Jane Kallir is a consultant for the exhibition.

In Grandma Moses Goes to the Big City, Moses depicts herself amidst the bustle of a working farm, about to embark on a rare trip to New York City to see her own paintings on view at Galerie St. Etienne. The gallery, established in 1939 by Kallir’s grandfather Otto Kallir, an émigré from Vienna, specialized in modern Austrian masters such as Gustav Klimt, Oskar Kokoschka, and Egon Schiele. Otto Kallir also had a keen interest in the work of self-taught painters. He gave Moses her first solo exhibition at his fledgling gallery in October 1940. The “new” artist was 80 years old.

Moses’s debut exhibition, which she did not attend, had an unassuming title: What a Farmwife Painted, and presented 34 relatively small paintings. Though the show had modest success, Otto Kallir signed Moses to a contract as her exclusive representative. He soon launched a program of travelling exhibitions that over the next two decades brought Moses’ work to more than 30 states, 10 European nations, and even Moscow during the Cold War. Moses became arguably the most famous American artist of the era, and certainly the most successful female painter. She appeared on the covers of Time and Life. Her work was the first contemporary American acquisition by the Musée National d’Art Moderne in Paris in 1950.

The Galerie St. Etienne continued to represent Grandma Moses until her death in 1961. Today, it represents her estate. Moses produced as many as 1,600 paintings in the last 23 years of her life.

The artist’s work continues to be highly prized by collectors and has enduring appeal with the public. Exhibitions of her work are nearly constant, and Jane Kallir has been the curator or a consultant for many of these. The most recent large-scale traveling exhibition in the United States, from 2006 through 2008, was entitled Grandma Moses: Grandmother to the Nation. Its run included such institutions as Reynolda House Museum of American Art in Winston-Salem NC, and the Ringling Museum of Art in Sarasota FL.

Since 1982, Jane Kallir has authored four books on Grandma Moses. The most recent, Grandma Moses in the 21st Century, was published in 2001 by Art Services International. Her scholarship follows in the footsteps of her grandfather, who produced three books on Moses, including the first monograph, Grandma Moses: American Primitive, published by Doubleday in 1946, and the artist’s catalogue raisonné, published by Abrams in 1973.

About the Galerie St. Etienne
The Galerie St. Etienne, located at 24 West 57th Street in New York City, is the oldest gallery in the United States specializing in Expressionism and Self-Taught Art. It was established in 1939 by Otto Kallir, previously founder of the Neue Galerie in Vienna, a principal exponent of German and Austrian modernism. The Galerie St. Etienne provided America with a first look at the art of Gustav Klimt, Oskar Kokoschka, Alfred Kubin, Paula Modersohn-Becker and Egon Schiele. Today, its venerable standing continues under the direction of Jane Kallir, Otto’s granddaughter, and Hildegard Bachert, whose scholarship and expertise extend around the world. Jane Kallir recently curated the enormously popular show The Women of Klimt, Schiele and Kokoschka at the Belvedere Museum in Vienna. The Galerie St. Etienne participates in the Winter Antiques Show, the ADAA Art Show, Art Basel, and the IFPDA Print Fair.