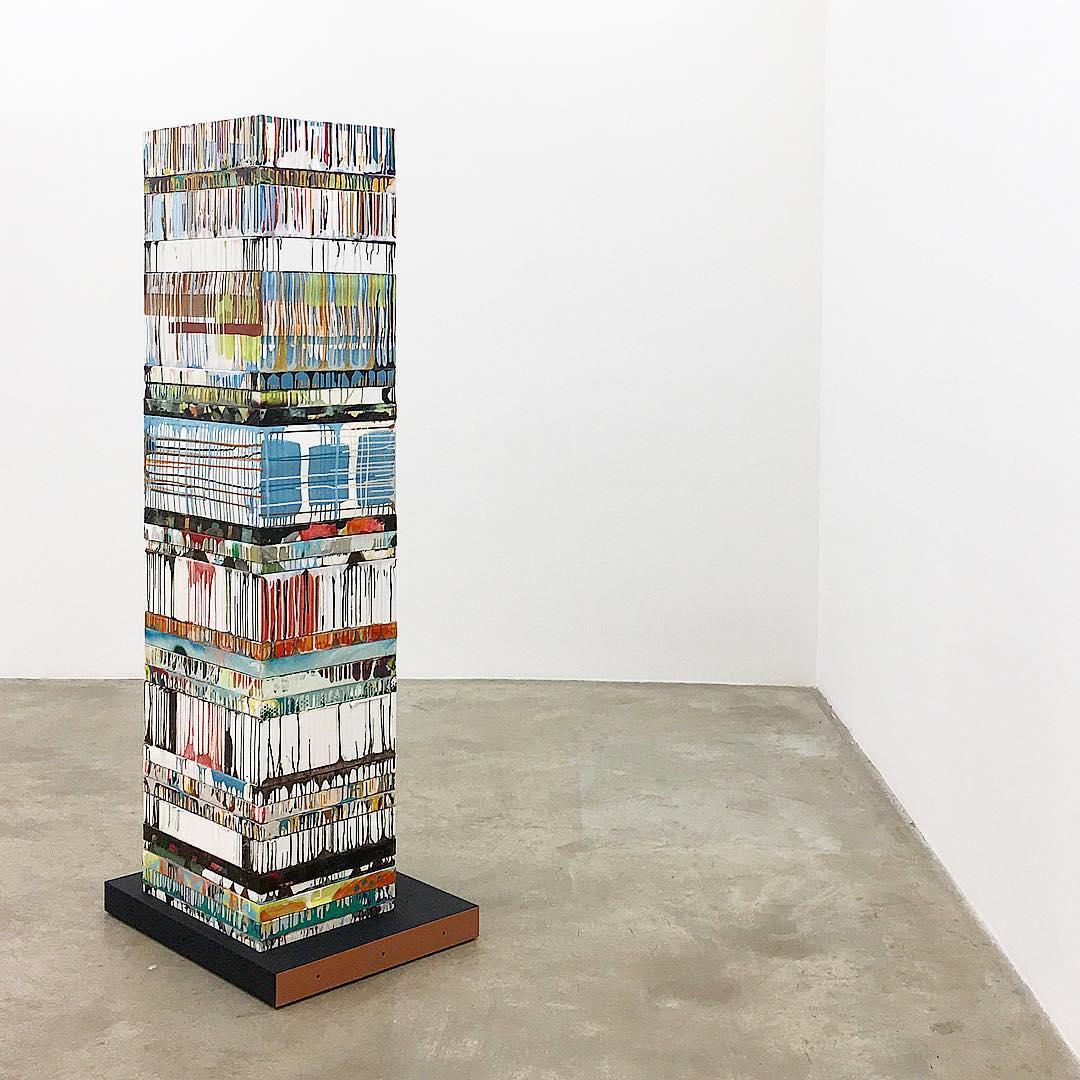 Courtesy of the Artist.

Opening on April 27, 2018, the Institute of Contemporary Art at the University of Pennsylvania (ICA) will mount the first US museum presentation of Seoul-based contemporary artist Suki Seokyeong Kang. Featuring the debut of Kang’s ambitious project, "Black Mat Oriole," which presents an expanded approach to painting and an activation of space through a choreographed installation and an immersive video triptych. Bringing together sculpture, painting, textiles, and video, which draw on classical Korean traditions, the artist will create a landscape that engages viewers with the power and politics of space. Suki Seokyeong Kang is curated by Alex Klein, Dorothy and Stephen R. Weber (CHE ’60) Curator at ICA and Kate Kraczon, Laporte Associate Curator at ICA and will be on view through August 12, 2018.

“Although Suki Seokyeong Kang’s work has been shown around the world, more recently at the 2016 Gwangju Biennale, this exhibition marks her first US presentation and we’re excited to give our audiences the opportunity to engage directly with her thought-provoking exploration of space and objecthood,” said Amy Sadao, Director of ICA. “Emerging from a younger tradition of artists who have trained abroad, Suki’s work offers a new and fresh perspective that is situated within a broader international conversation, bridging her Korean roots and Western education. Through this exhibition, ICA continues to provide our visitors some of the earliest opportunities to experience the work of emerging artists as they gain momentum in the art world, and we’re honored to show the realization of Kang’s first major project Black Mat Oriole as she continues to rise in prominence and recognition.”

Anchoring the exhibition is the stunning Black Mat Oriole video, an ambitious work five years in the making, in which Kang has created an immersive narrative influenced by the flow and movement found within classical Korean poetry, calligraphy, and dance but is firmly rooted in the contemporary landscape. Specifically inspired by the choreography found in the historical Korean dance “Chunaengmu,” which was performed for royalty and adhered to strict codes of court etiquette, Kang explores how a space can be divided into grids defined by power and cultural customs. The exchange of movement and interplay in the installation will be navigated through freestanding frame-like structures fashioned into geometric patterns and abstract paintings. Both immersive and interactive, audiences will be able to step into and activate a fluid environment, navigating the shifting relationship between their own bodies and the objects.

Additional highlights include sculptures that refect the weight and tangibility of everyday objects; “hwamunseok,” traditional Korean mats handwoven with sedge reeds that grow on Ganghwa Island; and a special performance the weekend of the exhibition opening that will include a new “activation” directed by Kang featuring Seoul-based dancers. The tactile, sensory, and textured nature of Kang’s works, many of which incorporate repurposed materials sourced directly from factories in South Korea, will help form a physical connection between the objects and the viewer, creating a dynamic and interactive relationship to the surrounding space.

“Kang’s work both complicates how we understand the experience of painting and acts as a metaphor for how individuals have agency within the political sphere. In our current geopolitical moment, her questioning of borders and boundaries is more relevant than ever,” said Alex Klein. Kate Kraczon added: “Kang thinks of the way bodies move through her spaces as scripted. There’s an anthropomorphic quality to the sculptures that is reflected in the way her actors interface with the objects in her video work.”

The exhibition is accompanied by a fully illustrated catalogue designed by Seoul-based design studio Sulki & Min featuring essays by the curators and an interview between the artist and Maria Lind, Director of Tensta Konsthall, Stockholm.

ABOUT SUKI SEOKYEONG KANG
Suki Seokyeong Kang (b. 1977, Seoul, Korea) uses various media including painting, installation, and video to seek a synesthetic expansion of painting methodology. In her work, the conditions of painting mediate materiality, space, temporality, and narrative as they construct a visual score. Her practice is situated between the abstract and the figurative, the organic and the geometric. She is interested in creating a visual language of balance and harmony, through which she seeks to portray the structure and order of various conditions that each individual faces in society.

ABOUT ALEX KLEIN
Alex Klein is the Dorothy and Stephen R. Weber (CHE ’60) Curator at the Institute of Contemporary Art at the University of Pennsylvania. She is currently collaborating with ICA curator Kate Kraczon on an exhibition of work by Suki Seokyeong Kang and completing a publication with Sternberg Press (forthcoming winter 2018) in conjunction with her exhibition Myths of the Marble (2017) cocurated with Milena Hoegsberg and co-organized with the Henie Onstad Kunstsenter, Norway. In 2015 she organized Barbara Kasten: Stages at ICA, which was the first major survey of the artist’s work and subsequently traveled to the Graham Foundation, Chicago and the Museum of Contemporary Art, Los Angeles. Other selected exhibitions at ICA include: Broadcasting: EAI at ICA (2018, co-curated with Rebecca Cleman); a partnership with the Kunsthalle Wien, Austria to present the first retrospective of Nathalie Du Pasquier BIG OBJECTS NOT ALWAYS SILENT (2017, organized with Luca Lo Pinto), Julia Feyrer and Tamara Henderson: Consider the Belvedere (2015); Excursus (2011–13); and First Among Equals (2012, co-curated with Kate Kraczon). From 2013 to 2015 she served as an agent in the Carnegie Museum of Art’s Hillman Photography Initiative, where she co-curated the exhibition Antoine Catala: Distant Feel (2015, with Tina Kukielski) and co-edited the publication Shannon Ebner: Auto Body Collision (CMOA, 2015). Her writing has been published in numerous collections, including Public Servants: Art and the Crisis of the Common Good (MIT Press, 2016), The Human Snapshot (Sternberg Press/CCS Bard, 2013), How Soon Is Now? (LUMA, 2012), and the critical volume on photography Words Without Pictures (LACMA/ Aperture, 2010), which she also edited. Previously she held positions in the Wallis Annenberg Photography Department at the Los Angeles County Museum of Art; the Roski School of Fine Arts at the University of Southern California; and The Metropolitan Museum of Art, New York.

ABOUT KATE KRACZON
Kate Kraczon joined ICA in 2008 from the Museum of Contemporary Art, Chicago. She is currently organizing Ree Morton’s first major retrospective in the United States in over three decades (2018), and is collaborating with ICA curator Alex Klein on an exhibition of work by Suki Seokyeong Kang. Kraczon recently organized the frst museum exhibition of the work of Becky Suss, as well as a survey of Angel Nevarez and Valerie Tevere’s collaborative practice. She worked with Basel Abbas and Ruanne Abou-Rahme on the first North American presentation of their project The Incidental Insurgents (2012– present) at ICA (2015), and commissioned the major video installation Easternsports (2014) by Alex Da Corte and Jayson Musson. In 2014 she oversaw the museum’s 50th anniversary exhibition, ICA@50, which included projects she commissioned by Elisabeth Subrin and Linda Yun, as well as Mary Ellen Carroll, Simon Kim, and Bryan Zanisnik with the Philadelphia nonproft Recycled Artist in Residency (RAIR) and their co-founder, artist William Dufala. Previous programs include Karla Black’s frst major museum exhibition in the United States (2013); First Among Equals (2012, co-curated with Alex Klein), which considered the various modes that contemporary artists have developed to work with their peers and reach across generations; One is the loneliest number (2011), featuring artist duos based in Philadelphia and elsewhere; Summer Studio with Anthony Campuzano (2010), a month-long free art school and working artist’s studio in the ICA galleries; Touch Sensitive: Anthony Campuzano (2009), the frst museum show of this artist whose work is largely text-based; and Asking Not Telling (2009), a video show presenting works that use the tropes of documentary flmmaking to capture, record, (re)record, and represent cultural memory. She has overseen ICA’s annual juried video exhibition, Open Video Call, since 2008. Kraczon has been the receiving curator at ICA for several traveling exhibitions, including Dear Nemesis, Nicole Eisenman 1993–2013 (2014), Readykeulous by Ridykeulous: This is What Liberation Feels Like™ (2014), Jeremy Deller: Joy in People (2012), and Tim Rollins and K.O.S.: A History (2009).

ABOUT THE INSTITUTE OF CONTEMPORARY ART AT THE UNIVERSITY OF PENNSYLVANIA
The Institute of Contemporary Art at the University of Pennsylvania is a non-collecting institution presenting exhibitions at the forefront of contemporary practice and culture that challenge audiences to think in new ways. The ICA is free for all to engage and connect with the art of our time. Since its founding in 1963, ICA has served as a laboratory for the new, introducing and supporting the production of urgent and important contemporary art, beginning with ICA’s inaugural show of paintings by Abstract Expressionist Clyford Still, followed by the frst museum show of works by Andy Warhol in 1965. Throughout its history, ICA has been instrumental in identifying and developing many promising artists before they attained prominence within the international art world, some of whom include—in addition to Warhol— Laurie Anderson, Richard Artschwager, Vija Celmins, Karen Kilimnik, Barry Le Va, Glenn Ligon, Robert Mapplethorpe, Agnes Martin, Pepón Osorio, Tavares Strachan, and Cy Twombly.