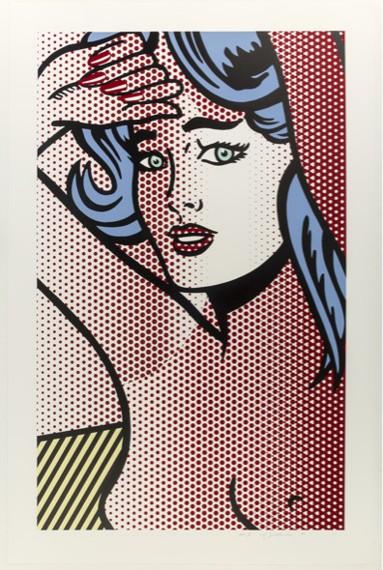 Heritage will offer Lichtenstein's 1994 Nude with Blue Hair, from Nudes (est. $300,000-500,000) as part of a series of images that used 1960s comic book caricatures rather than live image for inspiration.

"Heritage is honored to offer this monumental work by Roy Lichtenstein," Heritage Auctions Modern & Contemporary Art Director Holly Sherratt said. "Hutcheson was a Master Printer in all of the traditional printing techniques, including etching, woodcut, lithography, silkscreen and papermaking. During the 1980s, John Hutcheson ran his own workshop in the New York City area and developed personal relationships with hundreds of artists. His prints appear in private and museum collections including The Whitney Museum of American Art, MoMA and the Metropolitan Museum of Art in New York and the Tyler Collection Archives in Australia, Japan, Singapore and Minneapolis."

Nude with Blue Hair epitomizes the incredible talent of Lichtenstein, as well as the technical expertise of Hutcheson, who contributed to Lichtenstein's vision using complex stencils and state of the art printing methods. The Nudesseries exemplifies Lichtenstein's signature comic book style: the artist adhered to a strict color palette of primary colors heavily outlined in black, while also branching out by contrasting geometrical shapes and lines against the curves of the subject's body. Lichtenstein employed unconventional shading with his benday dot technique, a process that mimics commercial comic book printing with dynamic dots that create optical illusions. This lot offers the rare opportunity to own one of the most significant works by Lichtenstein from the collection of the printer whose work with artists such as Frank Stella, Helen Frankenthaler and David Hockney helped influence art history.

Other top lots from the Hutcheson collection include, but are not limited to:

The 165-lot auction also includes works from various owners that are sure to draw significant interest. The sale features 11 lots by Andy Warhol, including several listed below: