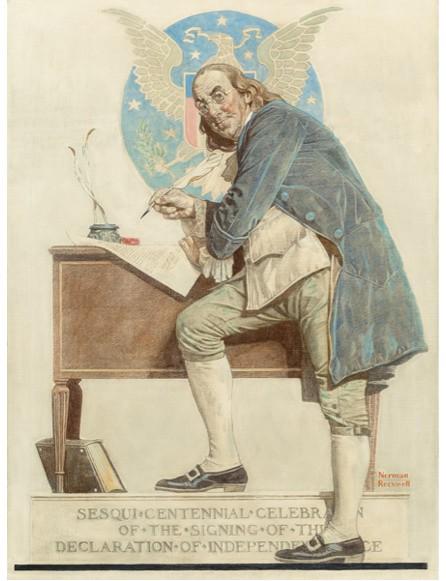 DALLAS, Texas (April 23, 2018) — A painting by one of the most popular American artists of all time, and formerly owned by a famous Hollywood actress is expected to be the top lot at Heritage Auctions' American Art Auction May 4 in Dallas, Texas.

Once in the private collection of late actress Debbie Reynolds, Norman Rockwell Ben Franklin's Sesquicentennial, The Saturday Evening Post cover, May 29, 1926 (est. $800,000-1,200,000) was commissioned in celebration of the 150th anniversary of the signing of the Declaration of Independence and is Rockwell's only cover illustration featuring a Founding Father.

"Norman Rockwell is one of the most beloved American artists who ever lived,” said Aviva Lehmann, Director of American Art. "Collectors of American art are drawn in great number to his works, as they immediately increase the strength and impact of any collection. The offerings in this auction span decades and many aspects of Rockwell's career, allowing collectors at all levels to get involved.”

Another Rockwell expected to spark significant interest is Norman Rockwell The Census Taker, The Saturday Evening Post cover study, 1940 (est. $250,000-350,000). While amusing, The Census Taker also documented a serious and important event in American History, the 1940 U.S. Census, which occurred April 1, only weeks before the April 27 debut of this Post cover.

Norman Rockwell Stealing Socks, Interwoven Stocking advertisement, 1928 (est. $200,000-300,000) serves as a primary example of Rockwell's skillful ability to present an enduring and heartwarming image that continues to resonate with the public even decades after its creation. Stealing Socks served as an advertisement for Interwoven Stocking that first appeared in The Saturday Evening Post on Feb. 11, 1928.

Rockwell's Before the Shot, The Saturday Evening Post cover study, 1958 (est. $150,000-250,000) is a preparatory study for an illustration that graced the March 15, 1958 cover of The Saturday Evening Post. The scene takes place in the interior of Stockbridge (Massachusetts) physician Dr. Donald Campbell's office. Dr. Campbell was the model for the doctor, but while the little boy (Terry Locke) posed, Rockwell's favored model Louis Lamone served as the doctor's stand-in. One of the artist's most iconic and most popular images, the present study was exhibited alongside the final painting at the Norman Rockwell Museum in Stockbridge.

Rockwell rarely expressed his own political opinions, but Norman Rockwell The Day I Painted Ike (All through that grind of turning on different moods, he never lost patience. At the end-by golly, it was time to go fishing.), The Saturday Evening Post interior illustration, 1952 (est. $120,000-180,000) depicts the 34th president of the United States, of whom Rockwell was an unabashed fan; he even referred to himself as an "Eisenhower worshipper.” So intense was Rockwell's admiration for Eisenhower that Ben Hibbs, then editor of the Saturday Evening Post, wrote to Rockwell saying, "If Ike is elected, as I think he will be, no small share of the credit should go to Norman Rockwell."

John S. Jameson Grazing Sheep at Headwaters of a Stream, 1862 (est. $40,000-60,000) casts a spotlight on Jameson's enormous talent, and also raises the question of what he could have accomplished had he not lost his life at the age of 22 after being captured while fighting in the Civil War. The influence of the Hudson River School on the young prodigy is evident in the expansive landscape and exploration into theatrical light and weather effects. Depicting lush green fields with a rocky stream in the foreground, Jameson populates his scenery with cattle, a figure in red that creates a focal point to draw the eye in, and provides the viewer with a glimpse of the mountainous view beyond.

Joseph Rusling Meeker Lake Pontchartrain, Louisiana, 1880 (est. $20,000-30,000) was discovered recently in Concord, Massachusetts and is inscribed by the artist "Lake Pontchartrain, La.” Above his monogram signature. The large scale and specified location suggest it might have been executed as an exhibition entry, perhaps at the New Orleans World's Industrial and Cotton Centennial Exhibition in 1884.

Other lots expected to generate multiple bids from collectors include: