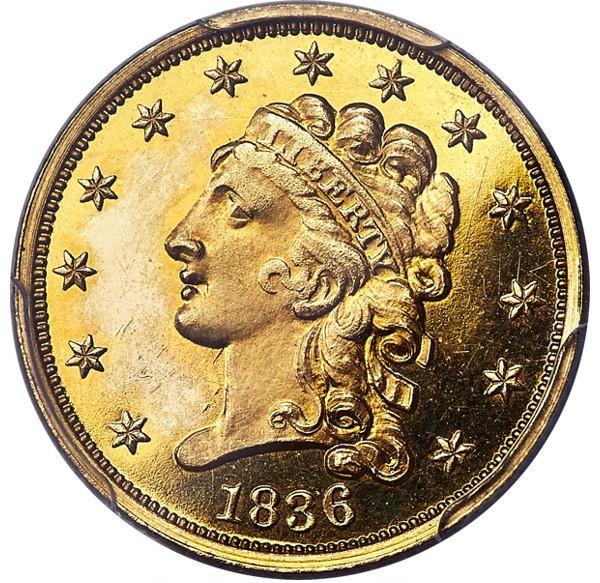 "It's no exaggeration this season's auction offered some of the most important discoveries and once-in-a-lifetime opportunities to own some of the rarest coins known to exist," said Greg Rohan, President of Heritage Auctions. "As expected, the hobby didn't ignore the opportunities and we saw spirited bidding across every numismatic collecting category."

With offerings spanning United States, World and Ancient coins, and World and U.S. currency, the April 26 through May 2 auctions delivered stunning, six-figure sale prices across every category.

The selection of U.S. Coins included an 1836 Classic Head Quarter Eagle — a rare proof specimen carrying the most illustrious pedigree of all of the estimated seven examples known — that sold for $396,000. The new owner of the PR65+ Deep Cameo, PCGS Secure. CAC., may now add their name alongside those of famous numismatists Lorin G. Parmelee, John Mills, William H. Woodin and Louis Eliasberg, Sr., among others, who owned the piece during its 182-year history.

The extraordinary 1915-S Panama-Pacific Round Fifty Dollar Gold Piece sparked lively bidding, which pushed the auction price to $336,000. One of the most memorable lots in the sale was an 1854-S Quarter Eagle, VF35 PCGS, which sold for $264,000, a branch mint gold rarity being one of only 12 specimens left of its kind.

An 1883 Liberty Double Eagle, PR64 Deep Cameo, one of 26 examples certified from the small proof-only mintage of 92 pieces, closed at $204,000, and a matte proof 1911 Ten Dollar Indian, PR67 PCGS Secure. CAC., one of only 95 examples struck, proved irresistible to bidders as it sold for $192,000, a signal that demand for matte proofs of the iconic Saint-Gaudens gold shows no signs of cooling any time soon.

Recently discovered in Maryland, a 1666 3 Speciedaler of Frederik III of Norway, sold for $432,000 to claim top-lot honors among more than 4,000 World and Ancient coin offerings. Until this example surfaced, this date was presumed unique in this denomination, the only known specimen purchased in 1831 and forming part of the Royal Collection in the National Museum of Copenhagen.

A Golden Jubilee 11-Piece Proof Set, NGC, issued in 1887 to celebrate Queen Victoria's 50 years on the throne, sold for $156,000. The set is an extraordinary offering, unmatched in previous auction records.

Two among the earliest Mexican gold coins struck, 1680 Charles II Gold Cob 4 Escudos — the earliest known 4 Escudos — sold for $84,000. The illustrated example for the type in Calico's standard reference Numismática Española, the gold coin is one of the rarest types in the Mexican colonial gold series and of great historical importance with provenance from the Isaac Rudman Numismatic Cabinet. A 1709 Philip V gold Cob 8 Escudos, MS63 NGC, sold for $56,400.

An iconic 1812 Bon Pour Deux Sous Token, PR65 NGC, linked to Lower Canada, made a rare auction appearance and ultimately sold for $50,400. The piece is presumed to be a pattern for a proposed coinage or a salesman's sample, but is one of one of four examples that exist.

Currency collectors zeroed in on true "number one notes" (those with the unique and highly collectible Serial No. 1) offered among the more than 5,000 lots of U.S. and World Currency auctioned during CSNS.

A spectacular, fully colored $500 1922 Gold Certificate PCGS About New 53 displaying simply delightful eye appeal, sold for $90,000. Speaking of eye appeal, a stately 1880 $100 Black Back Silver Certificate, PMG Very Fine 30 — one of only 25 known to exist — sold for $87,000. The coveted note is well known among collectors for its overly large portrait of President James Monroe and the bold printing of the words "SILVER CERTIFICATE" on the reverse.