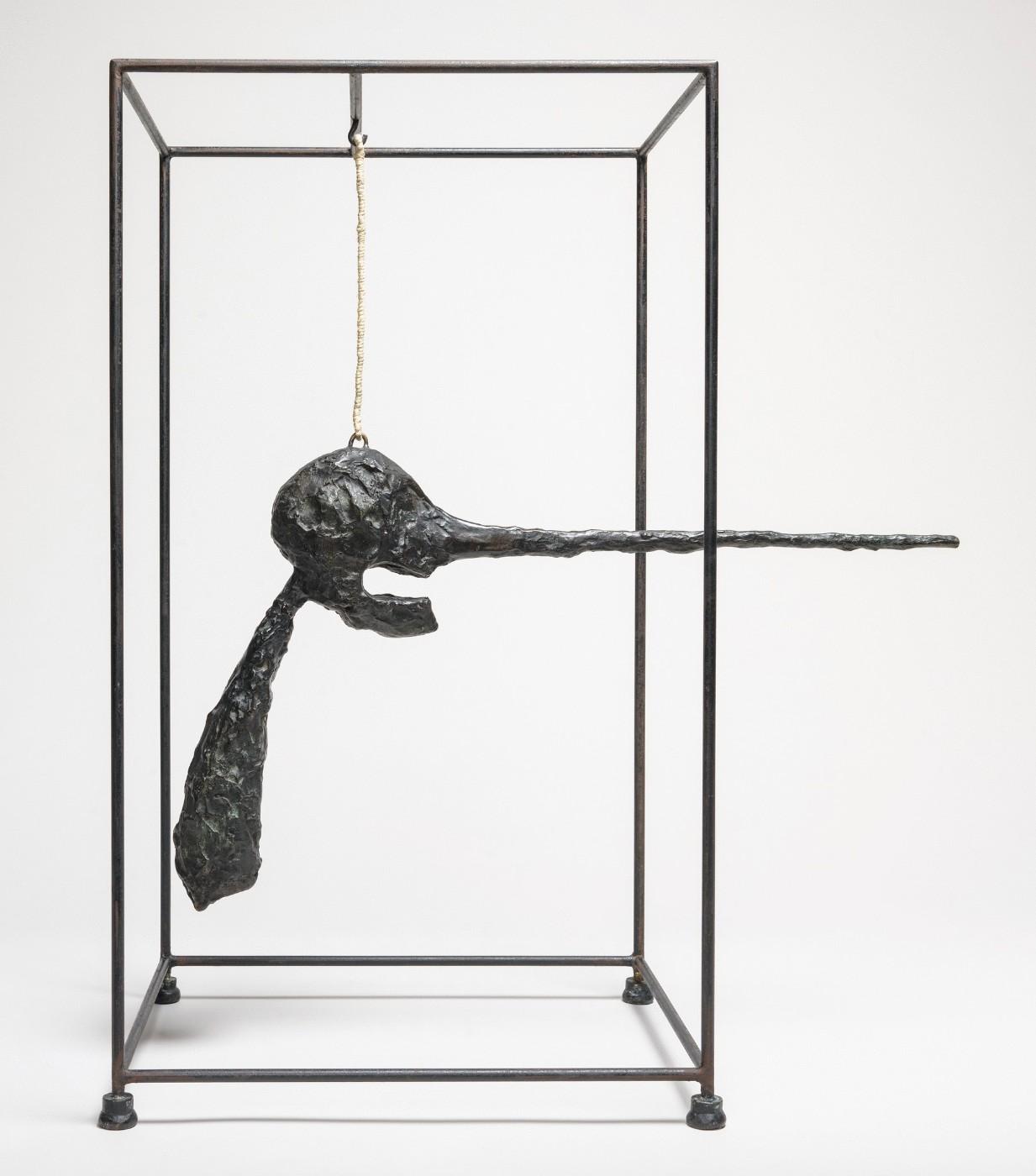 From June 8 to September 12, 2018, the Solomon R. Guggenheim Museum will present the work of the Alberto Giacometti (1901–1966)—the first major museum exhibition in the United States in more than 15 years dedicated to the Swiss-born artist. Installed within the museum’s rotunda, Giacometti examines this preeminent modernist who is renowned for the distinctive figurative sculptures that he produced in reaction to the trauma and anguish of World War II, including a series of elongated standing women, striding men, and expressive bust-length portraits. The exhibition encompasses the entirety of the artist’s career, featuring more than 175 sculptures, paintings, and drawings, some of which have never before been shown in the United States, as well as archival photographs and ephemera.

The exhibition underscores the historical relationship between the Guggenheim Museum and Giacometti. In 1955, in a temporary location, the Guggenheim organized the first-ever museum presentation of Giacometti’s work, which was also the earliest significant exhibition that the Guggenheim dedicated to sculpture. Under the leadership of then director James Johnson Sweeney, the museum brought key sculptures by Giacometti into its collection during this period in an effort to integrate the medium into its holdings and to support “the art of today.” In 1974, in the Frank Lloyd Wright-designed building, the Guggenheim organized a posthumous retrospective devoted to Giacometti. Beginning in the 1940s Peggy Guggenheim, Solomon’s niece, amassed Giacometti’s works along with examples of Surrealist and abstract art that would travel with her from New York to Europe and form the core of the Peggy Guggenheim Collection in Venice, now part of the Solomon R. Guggenheim Foundation.

Visitors to this fresh presentation on Giacometti will have the opportunity to view works from across his career, which largely was spent in France and which spanned several decades and various mediums. Examples of his early production reveal his engagement with Cubism and Surrealism as well as African, Oceanic, and Cycladic art, and reflect interactions with writers including Jean-Paul Sartre and Samuel Beckett. The exhibition’s selection of Giacometti’s paintings and drawings demonstrates his attempt to capture the essence of humanity-an endeavor that is also apparent in his incessant sculptural investigations of the human body. Sculptures of various heights will be installed on pedestals in the round or set back into the museum’s walls. Displayed in vitrines, a number of pocket-size figures and heads created immediately before World War II explore spatial concerns of perspective and distance that would become paramount to his work. Giacometti’s studio practice, a particular focus of the exhibition, is shown through rarely exhibited plaster sculptures. The artist painted some of these works or later cast them in bronze, but others’ intended medium was plaster. Rich historical photographs and ephemera, such as journals and sketchbooks containing drawings, also provide insight into Giacometti’s process and document his artistic development.

Giacometti features selections from the Fondation Giacometti and celebrated works from the Guggenheim collection, such as the bronze sculptures Spoon Woman (1926; cast 1954) and The Nose (1949; cast 1964). Loans from private and public collections further supplement the exhibition. Other highlights include a group of three sculptures from the late 1950s related to Giacometti’s unrealized project for the Chase Manhattan Bank plaza in New York, a major monument designed for an urban public space. Installed in the museum’s High Gallery, these large-scale works embody three motifs Giacometti explored during last 20 years of his life: standing female nudes, walking male figures, and bust-length portraits of family and friends. The final section of the exhibition, on the museum’s top ramp, presents footage from a film by Ernst Scheidegger, a friend of the artist, showing Giacometti at work in his longtime Paris studio.

A catalogue will be published to accompany Giacometti. Edited by Megan Fontanella and Karole P. B. Vail, Director, Peggy Guggenheim Collection, the volume features essays by Valerie J. Fletcher and Catherine Grenier and graphic design by Gavillet & Cie. A range of programs will be offered in conjunction with Giacometti, with details to be posted at guggenheim.org/calendar.

Giacometti is made possible by Lavazza. Additional support is provided by Northern Trust. The Leadership Committee for this exhibition is gratefully acknowledged for its support, with special thanks to Linda Macklowe, Cochair, as well as Acquavella Galleries, Larry Gagosian, FX and Natasha de Mallmann, Hauser & Wirth, Per Skarstedt, Ulla Dreyfus-Best, Grande Albergo Excelsior Vittoria – Sorrento, kamel mennour, Gigi and Andrea Kracht, La Prairie, Lévy Gorvy, Richard Gray Gallery, Thomas Ammann Fine Art AG, Thomas Gibson Fine Art, and those who wish to remain anonymous. Funding is also provided by Christie’s and the Swiss Arts Council Pro Helvetia. This exhibition is supported by an indemnity from the Federal Council on the Arts and the Humanities. It is co-organized by the Solomon R. Guggenheim Foundation and the Fondation Giacometti, Paris.

ABOUT THE FONDATION GIACOMETTI

The Fondation Giacometti, Paris, is a private institution of public interest recognized by the French state, established in December 2003. Its goal is to preserve, promote, and present the work of Alberto Giacometti. With over 300 sculptures, 90 paintings, and thousands of works on paper, it possesses the richest collection of artworks by the artist in the world: a collection that it is responsible for conserving, restoring, and enriching. The Foundation also has a remarkable collection of photographs and archival materials. A large proportion of this heritage has remained inaccessible to the public since the artist’s death in 1966. In 2014, the Foundation launched a vast exhibition program in France and abroad, designed to reach new audiences. In 2018, it will co-organize a number of major exhibitions of Giacometti’s work, including presentations at the Musée national des beaux-arts du Québec (February 8-May 13, 2018); Beyeler Foundation, Basel (Bacon Giacometti, April 29-September 2, 2018); Solomon R. Guggenheim Museum, New York (June 8-September 12, 2018); Musée Maillol, Paris (September 14, 2018-January 20, 2019); and Guggenheim Museum Bilbao (October 19, 2018-February 24, 2019).