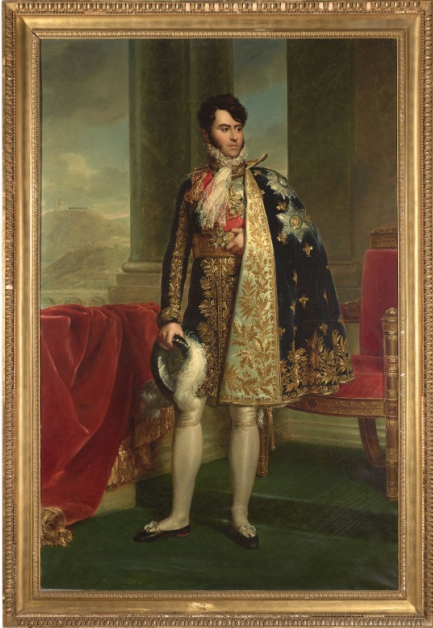 The Frick Collection announces its most important painting purchase since 1991 with the acquisition of François-Pascal-Simon Gérard’s full-length portrait of Prince Camillo Borghese, a notable art patron and the brother-in-law of Napoleon Bonaparte. Gérard (1770–1837) was one of the most significant French artists of the first half of the nineteenth century, and this stunning canvas will coalesce seamlessly with the museum’s holdings, which until now have not included his work. Chronologically, the painting sits between the museum’s French masterpieces by Boucher and Fragonard and later works by Ingres, Renoir, Monet, and Manet, while joining contemporaneous portraits by Chinard and David. It will, likewise, find good company in major works of portraiture by Bronzino, Rembrandt, Titian, Holbein, Van Dyck, Gainsborough, Reynolds, Romney, and Hogarth, Goya, and Whistler. Following conservation and technical study this winter and spring at The Metropolitan Museum of Art, Prince Camillo Borghese will go on view at the Frick in the fall 2018 as part of the exhibition Luigi Valadier: Splender in Eighteenth-Century Rome (October 31, 2018 through January 20, 2019).

Comments Chairman of the Board of Trustees Elizabeth Eveillard, “The Frick’s holdings, as a group, have been compared to a necklace assembled one precious pearl at a time. The sentiment reflects the modest scale of the collection born of its founder’s individual taste, balanced by the absolute requirement of quality. Just as Henry Clay Frick (1849–1919) made a series of unrushed choices, the growth of the collection in nearly one hundred years since his passing has been steady but measured, including sculpture and decorative arts, always meeting the criteria of high quality. With this striking painting, coming to the Frick with an unbroken provenance from the Borghese family, still on its original, unlined canvas, and in its original frame, the Frick has found a rare masterpiece to harmonize with its esteemed holdings.” Adds Director Ian Wardropper, “The last opportunity the Frick had to purchase a major French School painting was nearly thirty years ago, with the acquisition of Watteau’s Portal of Valenciennes. Today, it is deeply rewarding to have the rare opportunity to bring to the museum such an important work as this one, a historic portrait we feel would have compelled Henry Clay Frick. While the portrait has been shown in Rome, it has never been seen publicly in America. We look forward to sharing it in the atmospheric setting of the former Frick residence and among equally well chosen works.”

About the Artist, Portraitist to the Bonaparte Family

Gérard studied with the painter Jacques-Louis David (1748–1825), becoming one of his most talented pupils. At the time of the French Revolution, Gérard produced a number of historic paintings, including his celebrated Belisarius and Cupid and Psyche. In 1796, he painted a portrait of his friend the miniaturist Jean-Baptiste Isabey (1767–1855) and his daughter (all three works can be seen at the Musée du Louvre, Paris). The latter work marked Gérard’s public success as portraitist, and it soon became the primary genre in which he worked. With the advent of Napoleon, the artist found enormous favor with the emperor and his immediate family. Made a Baron of the Empire in 1809, Gérard exhibited a vast number of portraits at the various Paris Salon exhibitions almost every year during the first quarter of the nineteenth century. Even after the fall of Napoleon, in 1815, Gérard’s stellar career continued under the Bourbon Restoration in France.

Gérard’s role as portraitist to the Bonaparte family was the apex of his career. From the early 1800s until the fall of the empire in 1815, he portrayed most members of the imperial family, works that are today highlights of major collections internationally. These include Napoleon in coronation robes (Château de Versailles), his mother, Letizia Ramolino (Scottish National Gallery, Edinburgh), and the Empress Josephine (Hermitage, Saint Petersburg). Napoleon’s brothers Joseph and Louis, brother-in-law Joachim Murat, sisters Elisa and Caroline, and sister-in-law Hortense de Beauharnais also sat at different times for him. The Metropolitan Museum of Art owns large portraits by Gérard of Madame Talleyrand and her celebrated husband, politician Charles Maurice de Talleyrand Périgord.

The Borghese Family: Aristocratic Collectors and Patrons of the Arts

Camillo Borghese was born to one of the most important families of the Roman aristocracy. The family acquired substantial works of fine and decorative arts, patronizing sculptor Giovan Lorenzo Bernini in the seventeenth century and figures such as the silversmith and decorator Luigi Valadier in the eighteenth century. They were also interested in antiquities, and today their collection remains the foundation of the Greek and Roman holdings of the Musée du Louvre. Also a patron of the arts, Prince Borghese is most famously remembered for commissioning from Antonio Canova a full-length sculpture of his wife in the nude, as Victorious Venus. One of the best-known and beloved sculptures in Rome from the moment it was carved, this marble statue of Paolina Borghese is today one of the glories of Villa Borghese.

The family was known for its Napoleonic sympathies, and Camillo moved to Paris in 1796. In 1803 he married Napoleon’s favorite sister, Paolina Bonaparte (1780–1825). It was a tempestuous marriage. At first, the couple lived in gilded splendor between Paris and Rome, where they refurbished the apartments of Camillo’s parents in the Palazzo Borghese; however, they soon became estranged and each took lovers. Paolina was still officially at her husband’s side when, in February 1808, Napoleon effectively put him in charge of Piedmont, Liguria, Parma, and Piacenza. Camillo and Paolina moved from Paris to Turin in April of that year and lived between the Piedmontese capital, Paris, and Rome until April 1814. In 1808, when Camillo and Paolina moved to Turin, they shipped most of the paintings, sculptures, silver, and porcelain from the Palazzo Borghese in Rome to their new residence. In 1814, they returned to Rome, and an inventory drafted on April 25, 1814—lists a portrait of the prince, likely this one, which has become the official and most famous image of him, and is understood from the iconography in the work to have been painted around 1810 in Paris.

Read more about the exhibition of this work.
Tags
The Frick Collection