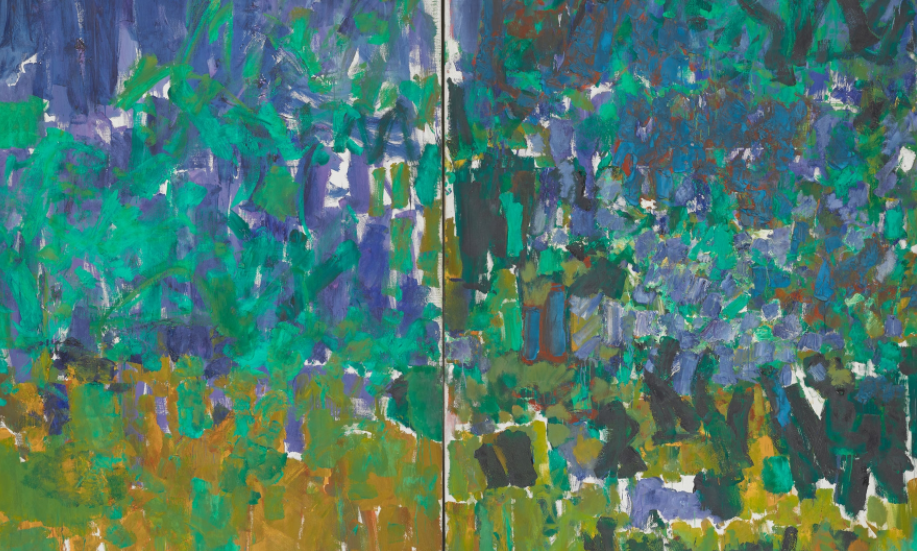 (New York, London, & Hong Kong – May 2, 2018) David Zwirner is pleased to announce its exclusive worldwide representation of the Joan Mitchell Foundation, which is committed to enhancing recognition of the work and life of acclaimed abstract painter Joan Mitchell. The gallery is planning a solo exhibition of Mitchell’s work for 2019 in New York.

Joan Mitchell (1925–1992) established a singular visual vocabulary over the course of her more than four decade career. While rooted in the conventions of abstraction, Mitchell’s inventive reinterpretation of the traditional figure-ground relationship and synesthetic use of color set her apart from her peers, resulting in intuitively constructed and emotionally charged compositions that alternately conjure individuals, observations, places, and points in time. Her prodigious oeuvre encompasses not only the large-scale abstract canvases for which she is best known, but also smaller paintings, drawings, and prints.

David Zwirner will be the Joan Mitchell Foundation’s exclusive commercial gallery. In this role, David Zwirner will promote the legacy of the artist through curated exhibitions at its New York, London, and Hong Kong gallery spaces; the development of new scholarship on the artist’s work through publications and international exhibitions; and the sale of artworks consigned to the gallery by the Foundation.

As stated by David Zwirner: “The gallery is proud to be entrusted to help with the extraordinary legacy of Joan Mitchell, one of the most important and original American painters to emerge in the second half of the twentieth century. Mitchell forged her own unique path, in life and in art, and her groundbreaking work remains unparalleled and relevant today. We especially look forward to partnering with the remarkable Joan Mitchell Foundation. It is serendipitous that, as our gallery celebrates its milestone twenty-fifth anniversary, so does the Foundation, and we are thrilled to be able to enter this exciting next chapter together.”

“Sustaining Joan Mitchell's legacy and fulfilling her vision to support and amplify the work of other artists are cornerstones of the Foundation's mission," said Christa Blatchford, Chief Executive Officer of the Joan Mitchell Foundation. “As we enter our twenty-fifth year, we look forward to partnering with David Zwirner to further engage audiences around the globe with Mitchell’s pioneering work, expanding awareness and scholarship of her inspiring practice.”

Born in Chicago and educated at the Art Institute of Chicago, from which she received a BFA (1947) and an MFA (1950), Mitchell moved in 1949 to New York, where she was an active participant in the downtown arts scene. She began splitting her time between Paris and New York in 1955, before moving permanently to France in 1959. In 1968, Mitchell settled in Vétheuil, a small village northwest of Paris, while continuing to exhibit her work throughout the United States and Europe. It was in Vétheuil that she began regularly hosting artists at various stages of their careers, providing space and support to develop their art. When Mitchell passed away in 1992, her will specified that a portion of her estate should be used to establish a foundation to directly support visual artists.

In 2002, the Whitney Museum of American Art, New York, organized a posthumous retrospective of Mitchell’s work, which traveled to Birmingham Museum of Art, Alabama; Modern Art Museum of Fort Worth, Texas; and Des Moines Art Center, Iowa. In 2010, the Joan Mitchell Foundation organized Joan Mitchell in New Orleans, which included a symposium on her life and work, and three concurrent exhibitions at Tulane University’s Newcomb Art Gallery, New Orleans Museum of Art, and the Contemporary Arts Center of New Orleans. In 2015, Joan Mitchell Retrospective: Her Life and Paintings was presented at Kunsthaus Bregenz, Austria, and subsequently traveled to Museum Ludwig, Cologne.

Mitchell / Riopelle: Nothing in Moderation is currently on view at the Art Gallery of Ontario, Toronto, through May 6, 2018. A room of Mitchell’s work is also included in The Long Run at The Museum of Modern Art, New York, through November 4, 2018. Mitchell will also be featured in Mary Gabriel’s forthcoming book Ninth Street Women: Lee Krasner, Elaine de Kooning, Grace Hartigan, Joan Mitchell, and Helen Frankenthaler: Five Painters and the Movement That Changed Modern Art, slated for release on September 25, 2018 by Little, Brown and Company.