"Blown Away" Brings the Corning Museum of Glass to Netflix 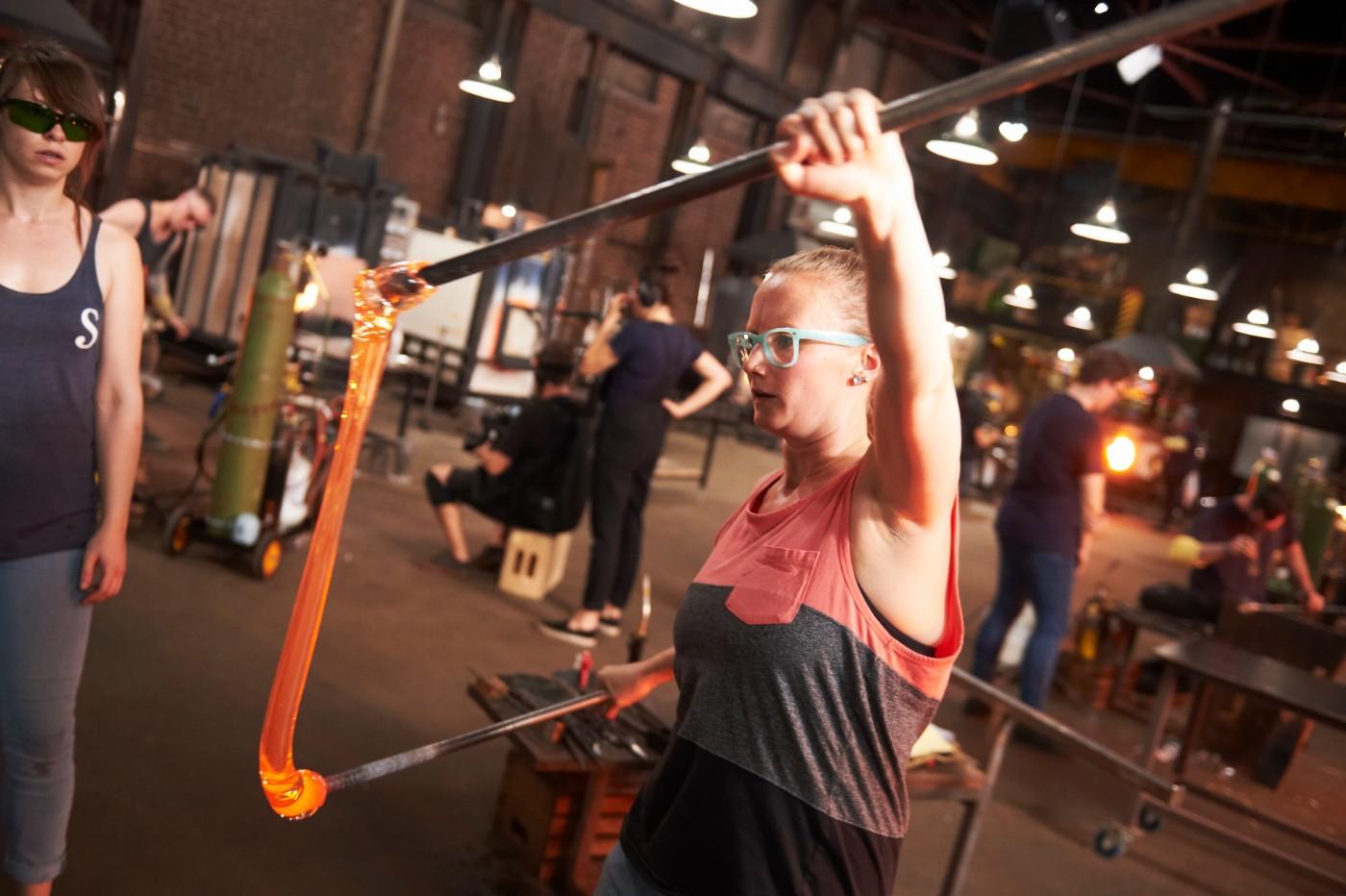 Glass blowers at the Corning Museum of Glass

The Corning Museum of Glass is a proud collaborator on an exciting, new competition series, Blown Away—created by producers marblemedia and a co-production of Netflix and Blue Ant Media of Toronto. The 10-episode show, which will bring the art of glassblowing to a global audience through the streaming platform, will launch on July 12, 2019.

The show follows a group of 10 highly skilled glassmakers from North America who have a limited time to fabricate beautiful works of art that are assessed by a panel of expert judges. One artist is eliminated in each 30-minute episode until a winner is announced in the tenth and final episode. YouTube star Nick Uhas, best known for his popular science show Nickipedia, hosts Blown Away and renowned artist Katherine Gray serves as the “resident evaluator.”

The Corning Museum of Glass, which houses the world’s most comprehensive collection of glass, the library of record on glass, and one of the top glassmaking schools in the world, served as a key consulting partner on the series. Eric Meek, Senior Manager of Hot Glass Programs at CMoG also served as a “guest evaluator” for the series finale, helping to select the winner of the competition. Also involved in that episode were six of the Museum’s expert glassmakers—Helen Tegeler, Catherine Ayers, George Kennard, G Brian Juk, Tom Ryder, and Chris Rochelle—who assisted the two finalists in realizing their last challenge.

The winner of Blown Away is awarded the title of “Best in Blow” and a prize package valued at $60,000, which includes a week-long Guest Artist appearance at CMoG. The winner will complete two working sessions this summer, July 17-18 and August 28-29, in preparation for the “Blown Away Residency,” October 14-18. During these times, the winner will participate in glassmaking demonstrations for the public in CMoG’s Amphitheater Hot Shop.

This summer, CMoG is displaying the exhibit Blown Away: Glassblowing Comes to Netflix, which tells the story of how the Museum found its way into the global spotlight. Visitors can see work created on the show by each competitor, and watch a behind-the-scenes documentary with interviews conducted on the set and footage captured of the Museum’s Hot Glass Demo Team taking part in the finale. 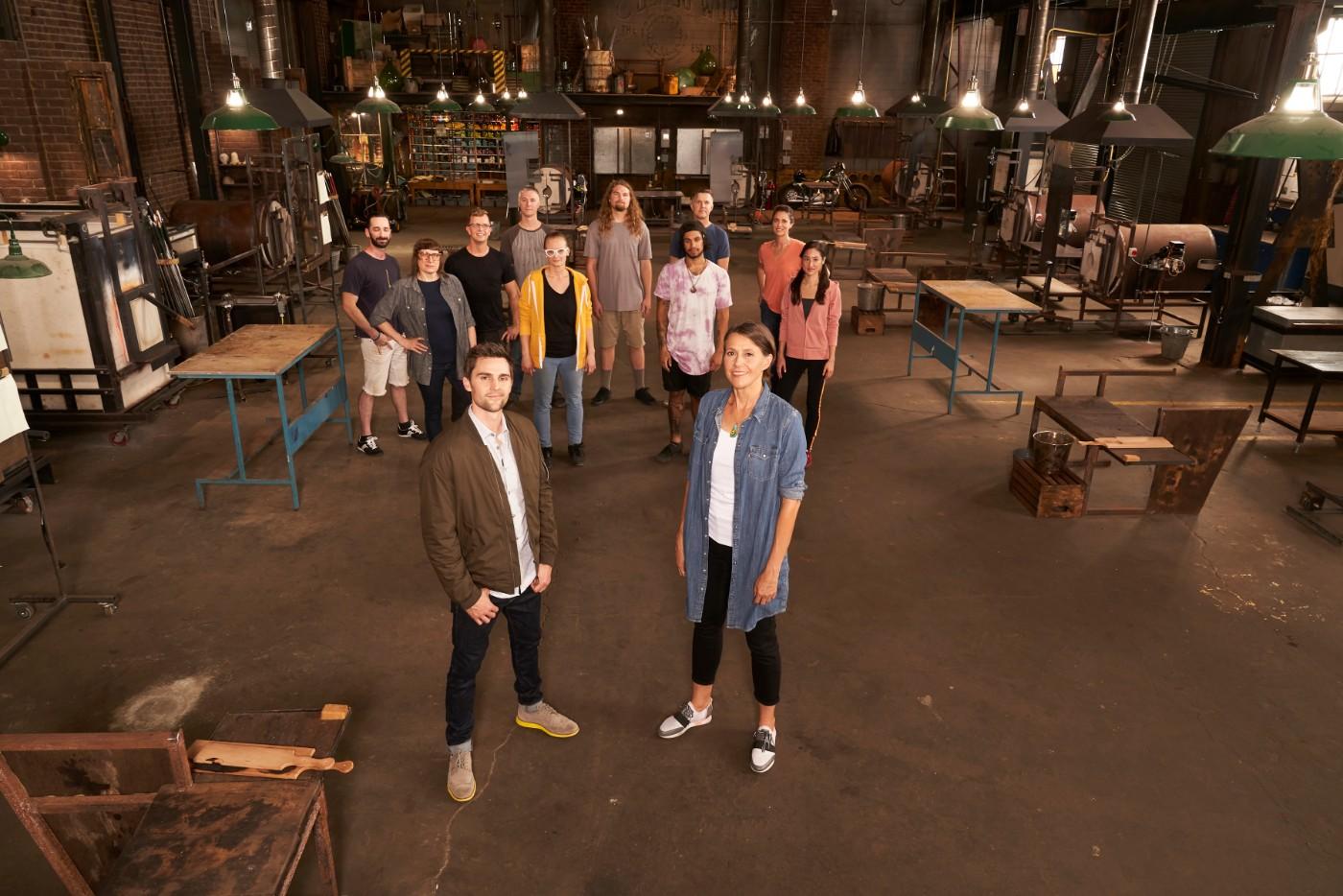 Publicity shot for Blown Away

“The Corning Museum of Glass inspires people to see glass in a new light,” said Eric Meek. “Blown Away is a global platform, and it’s exciting to think about how this will broaden glassmaking’s level of exposure.”

The series was filmed in the largest glassblowing studio ever built in North America, designed specifically for the scope and scale of the competition. The space allows 10 artists to work simultaneously, using two large glass-melting furnaces, 10 reheating furnaces and 10 individual work stations. The Craft and Design Glass Studio at Sheridan College in Toronto consulted on the studio design and aided the competitors for the first nine episodes.

Blown Away contestants include

ABOUT THE CORNING MUSEUM OF GLASS
The Corning Museum of Glass is the foremost authority on the art, history, science, and design of glass. It is home to the world’s most important collection of glass, including the finest examples of glassmaking spanning 3,500 years. Live glassblowing demonstrations (offered at the Museum, on the road, and on the water) bring the material to life. Daily Make Your Own Glass experiences at the Museum enable visitors to create work in a state-of-the-art glassmaking studio. The campus in Corning includes a year-round glassmaking school—The Studio—and the Rakow Research Library, with the world’s preeminent collection of materials on the art and history of glass. Located in the heart of the Finger Lakes Wine Country of New York State, the Museum is open daily, year-round. Children and teens, 17 and under, receive free admission.