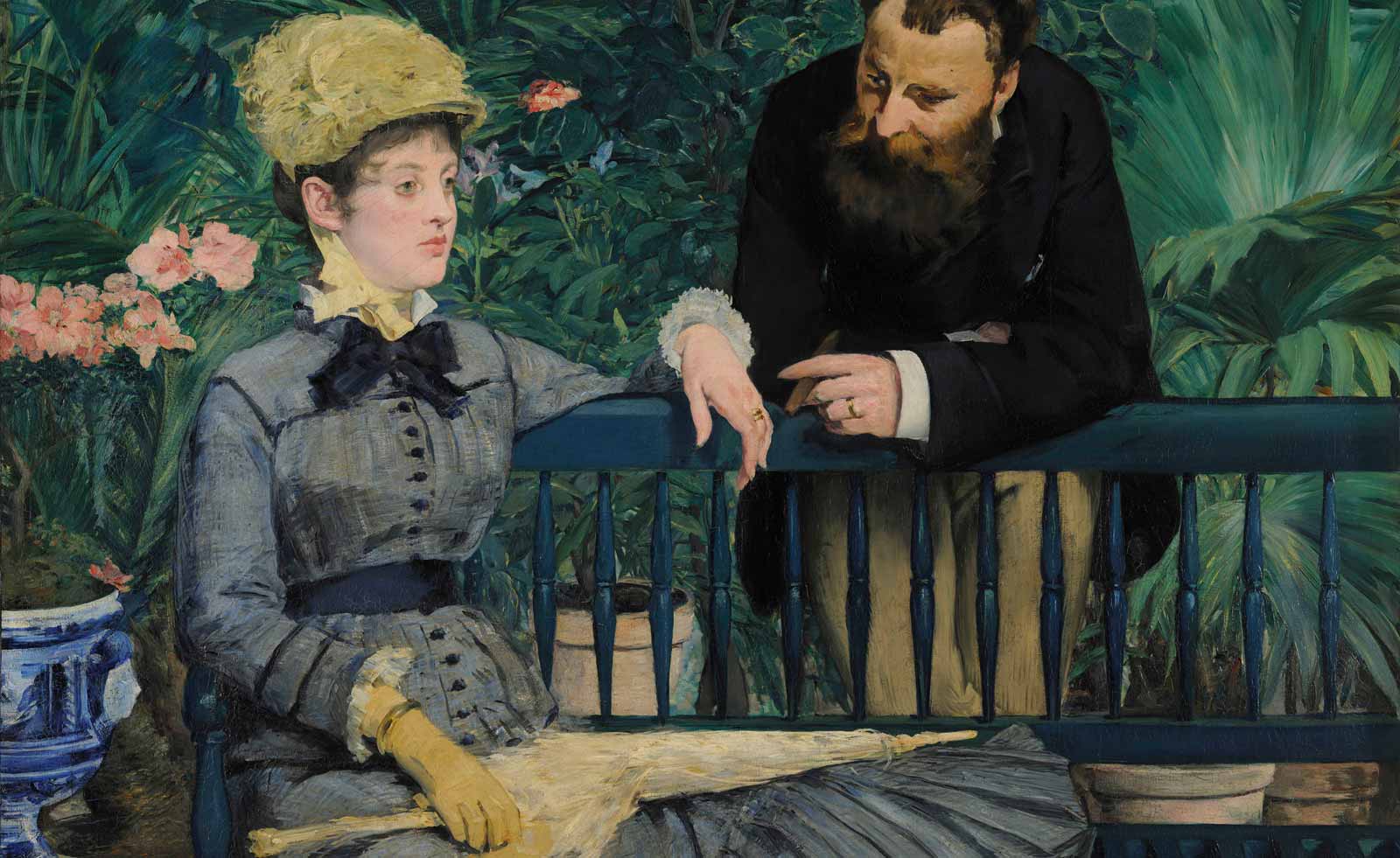 Staatliche Museen zu Berlin, Nationalgalerie.
Édouard Manet, In the Conservatory, about 1877–79.
Though contemporary critics considered them frivolous, Manet’s late works speak to his attraction to femininity, sensuality, and freshness of expression.

Though contemporary critics considered them frivolous, Manet’s late works speak to his attraction to femininity, sensuality, and freshness of expression. 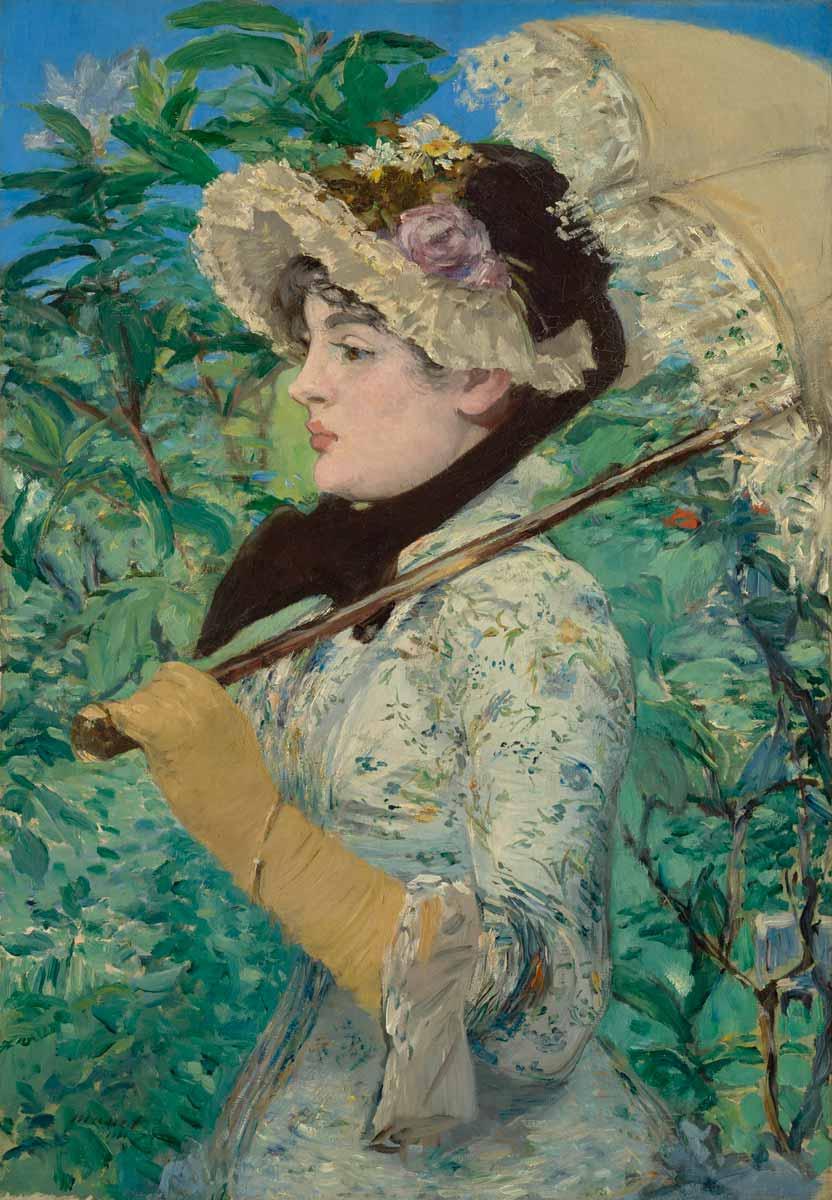 “For Manet, modern beauty is everything that has to do with freshness of expression, not only in the technique, but in subject matter. It’s a very feminine viewpoint, in certain ways.”

Eduoard Manet’s death was tragic for many reasons. The French painter’s life was cut short by complications of syphilis, and he passed away at the age of fifty-one on April 30, 1883, after many painful months. Despite his limited mobility as his health declined, he continued to paint in preparation for that year’s Paris Salon—which opened just days after he died. In his later years, he had also embraced a different mode of painting that critics largely dismissed for being too frivolous: he constructed portraits of fashionable women in pastels and pretty still lifes of flowers. They were major departures from his grand, large-scale masterpieces like Le Déjeuner sur l'herbe and Olympia.

Much to history’s loss, Manet’s late work has rarely been shown together. That has recenlty been corrected thanks to a 2019 exhibition at the Art Institute of Chicago—the first-ever to examine the artist’s final decades and stylistic transformation. Titled Manet and Modern Beauty, it is an unapologetic celebration of visual pleasure that also offers insight into the private struggles of one of art history’s most famous painters. On view were famous works such as Boating—a picture of bourgeois leisure that adopts the light brushwork and palette of the Impressionists—but also lesser-known works, including a group of letters illustrated with charming watercolors.

So what does modern beauty mean, in the context of this show?

“A sense of fashion and spontaneity—of being in the moment,” says Gloria Groom, the Art Institute’s curator of nineteenth-century European paintings and sculpture. “For Manet, modern beauty is everything that has to do with freshness of expression, not only in the technique, but in subject matter. It’s a very feminine viewpoint, in certain ways.”

No work exemplifies this perspective more than Jeanne (Spring) (1881), the show’s star, a painting that has spent the majority of its life in private hands (the J. Paul Getty Museum purchased it in 2014; the exhibition will traveled there in October 2019). The lush portrait portrays the budding actress Jeanne Demarsy, known then as Anne Darlaud. She sat for Manet at age sixteen, but appears like an adult—a sophisticated Parisian lady in the prime of her life. She is stylish, her gloved hand gently gripping a frilly parasol, although her delicate face is also protected by a chic, ornate bonnet. Nature flourishes everywhere, from the blossoms adorning her head to the flowers decorating her dress, which almost blend into the wall of rhododendrons that makes up the background.

Indeed, when she was unveiled at the 1882 Paris Salon—what would be Manet’s final one—critics were so struck by her augmented beauty that they saw her as a kind of apparition of nature. “She is not a woman, she is a bouquet,” responded critic Maurice de Seigneur. “Truly a visual perfume.” An objectified symbol, Jeanne also reinforced Western ideals of beauty. She was praised—by white European male critics—for her “nice little face, pink between the rice powder, this turned-up nose…” Manet himself even altered the structure of his sitter’s nose to enhance the retrousée effect, a desired, gentle upward scoop at the tip. The difference is perceptible when you compare the painting to photographs of Darlaud.

Jeanne exemplifies Manet’s deliberate constructions of his later works. He wanted to paint beautiful, modern women in their habitual settings—drinking in cafes, sitting in gardens—but his declining health confined him to his studio. So he invited his entourage of friends, many of them actresses, to sit for him, and he carefully positioned props around them. Actress Ellen Andrée is immortalized in the fantastic portrait Plum Brandy (1877), sitting and slouching slightly at a marble table, gazing into the distance, an unlit cigarette in one hand and a small drink in front of her. Its composition makes it seem like Manet was sitting in a cafe, observing her from a neighboring table; yet, she appears in her own world, a stylish woman with few concerns.

One of the largest paintings in the exhibition was In the Conservatory (1877-79), which depicts a scene that could be a photographic snapshot. Manet’s friends—Monsieur and Madame Jules Guillemet—rendezvous in a verdant Victorian hothouse: she’s relaxed on a bench, accessorized, of course, with a yellow parasol, yellow gloves, and a yellow hat made with soft ostrich feathers; he leans against the seat, seemingly trying to engage her. Behind them, tropical plants flourish, and while one can sense the heat and humidity of the space, this is actually another of Manet’s artificial constructions. His control over the setting, however, perhaps hampered the work’s overall effect for some viewers. One critic described the female sitter, who appears slightly stiff and indifferent to her companion, as a “hollow lobster.” His comment typifies the broad dismissal of Manet’s later works for their attention to fashion and women’s appearances—details that have become cherished to more modern eyes who appreciate them through a non-gendered lens. 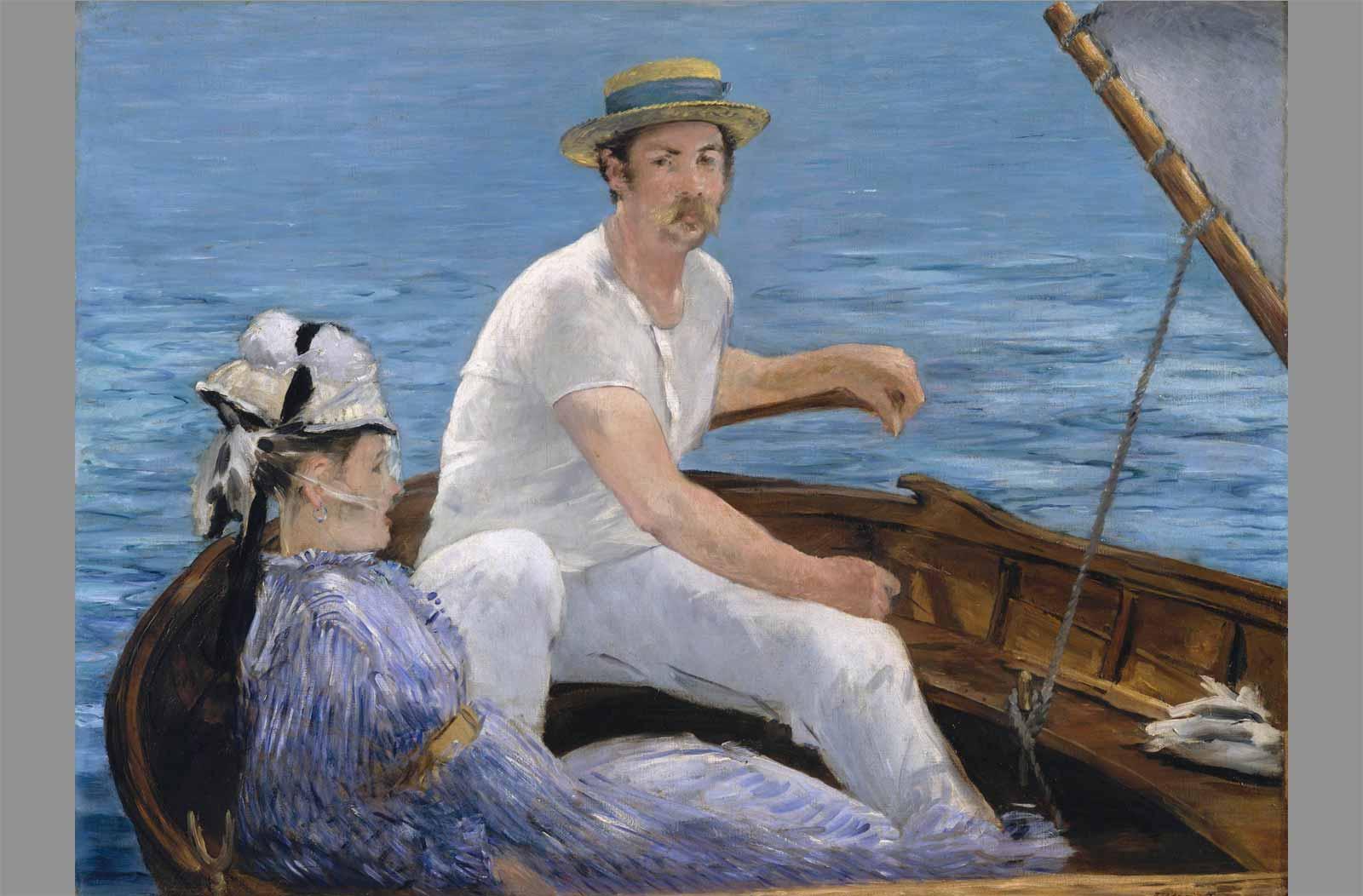 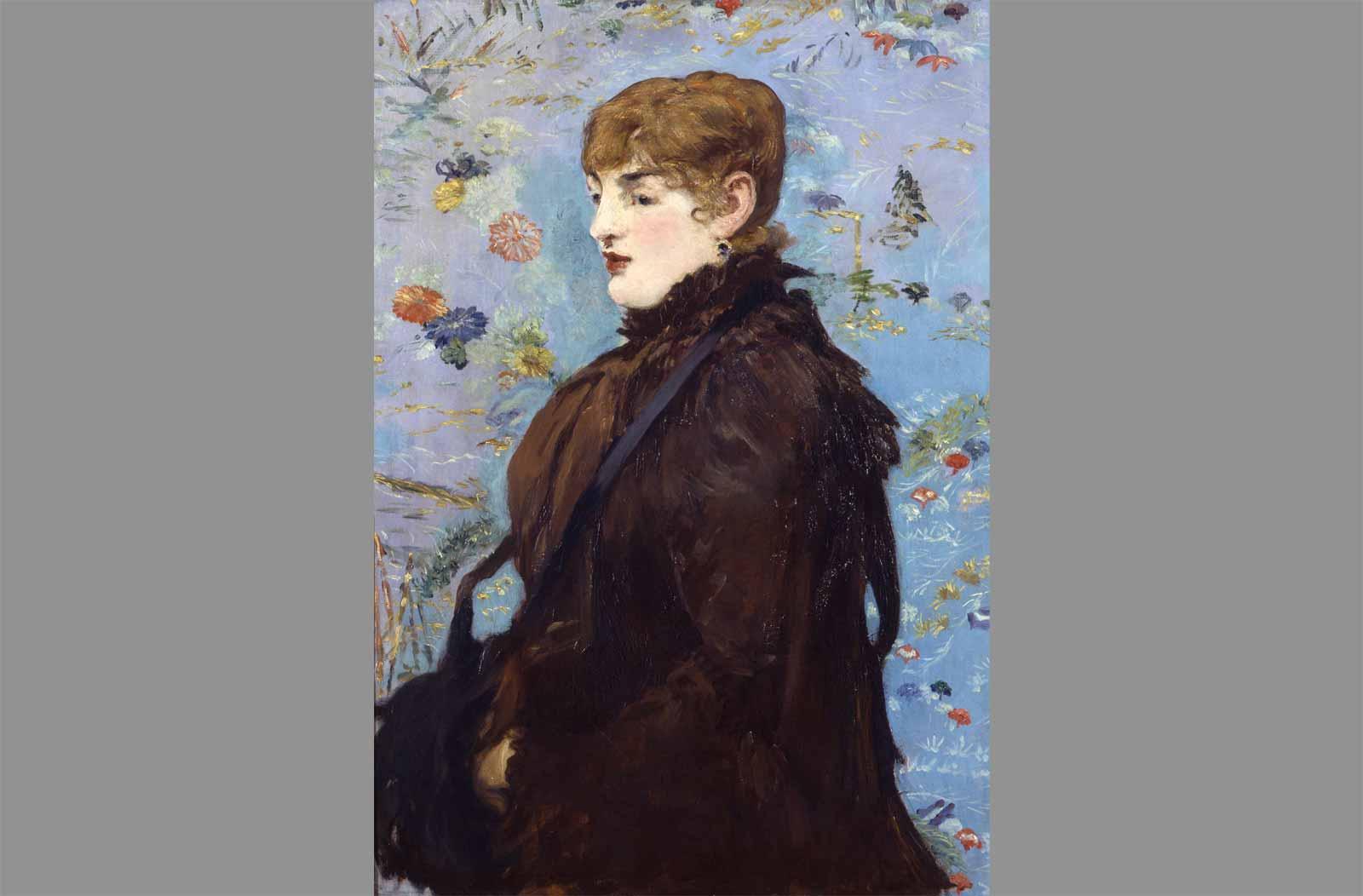 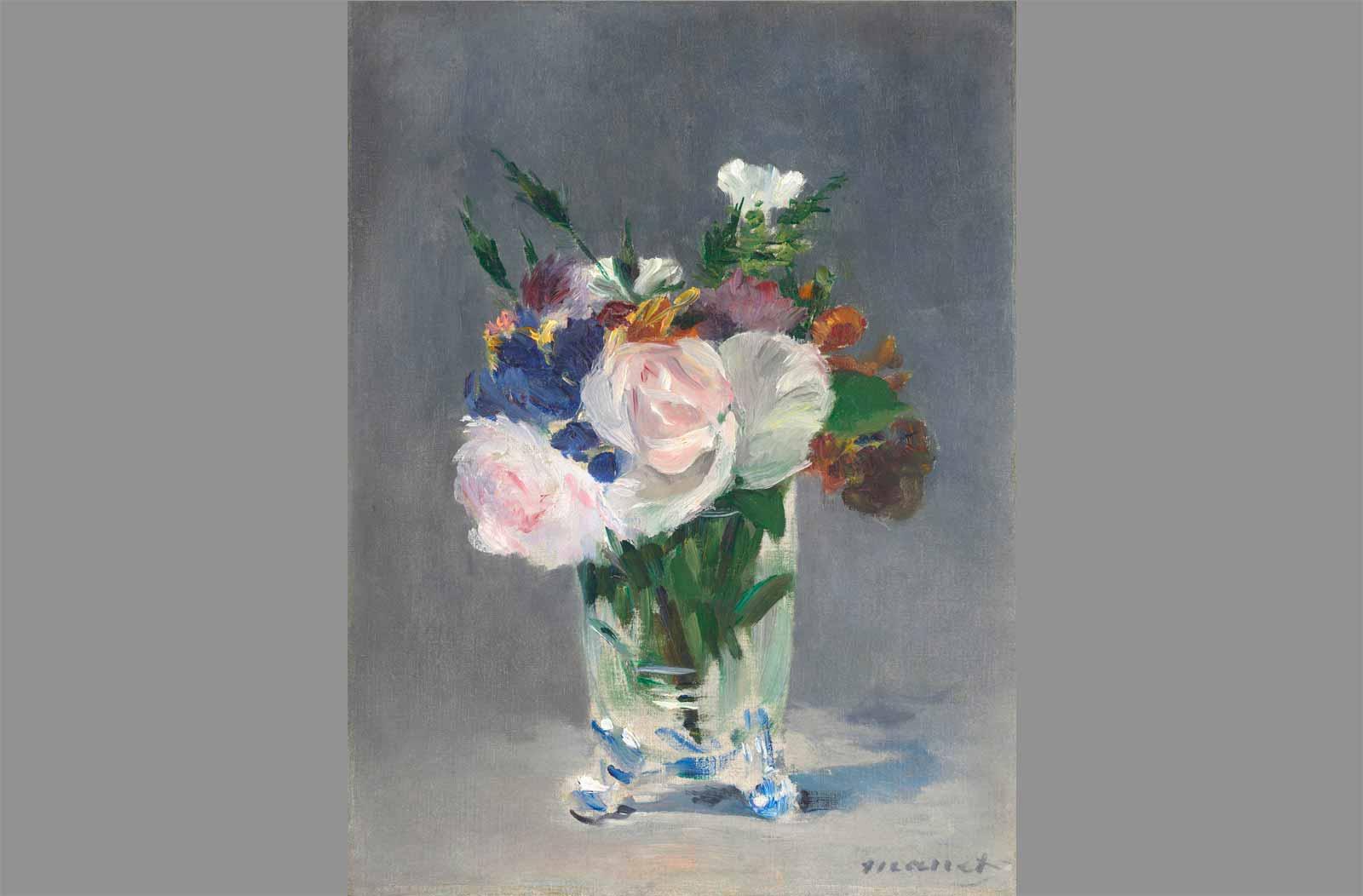 Édouard Manet, Flowers in a Crystal Vase, about 1882 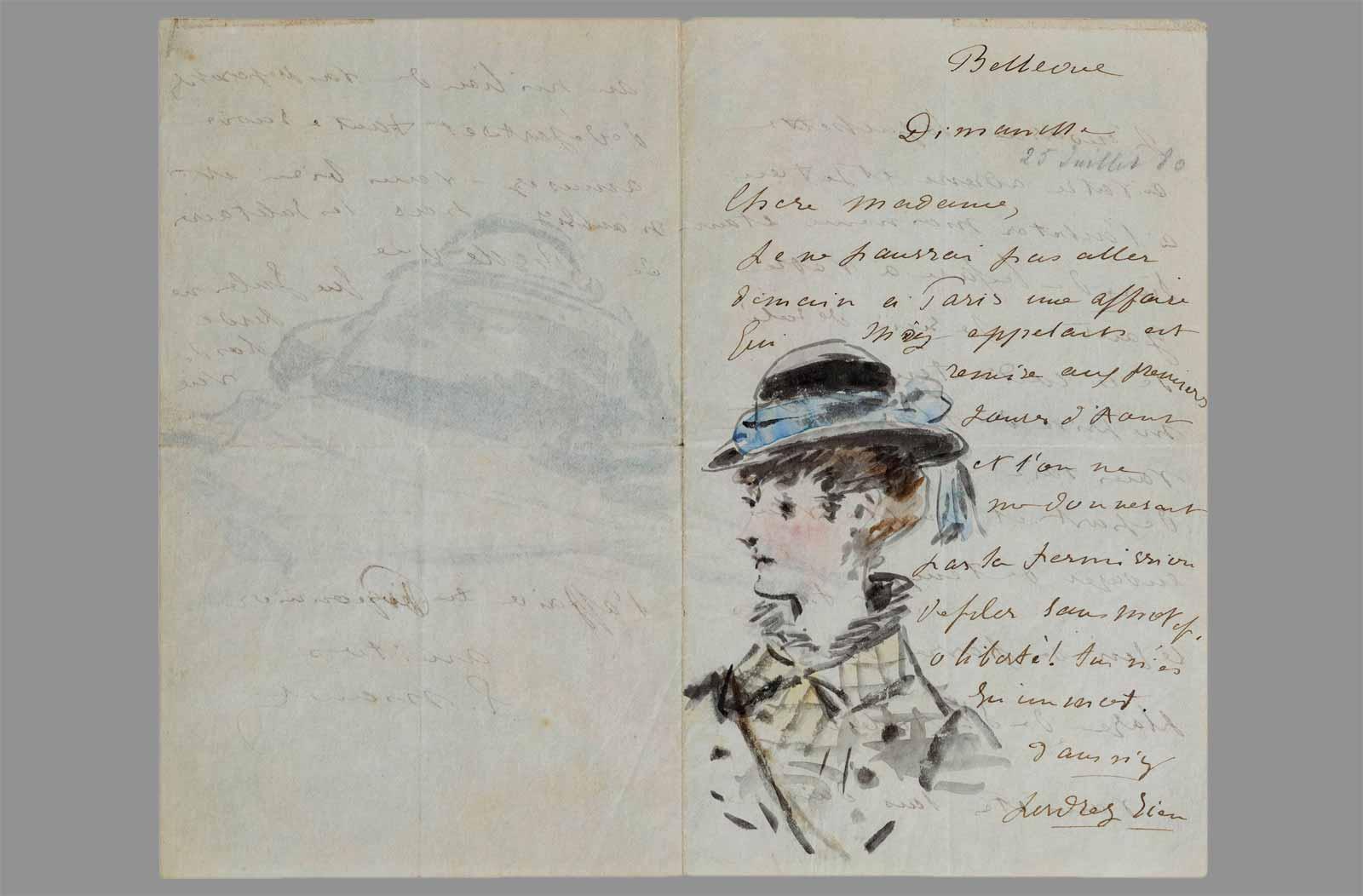 Édouard Manet, Letter to Madame Jules Guillemet, Decorated with a Portrait and a Still Life of a Bag and a Parasol, July 1880 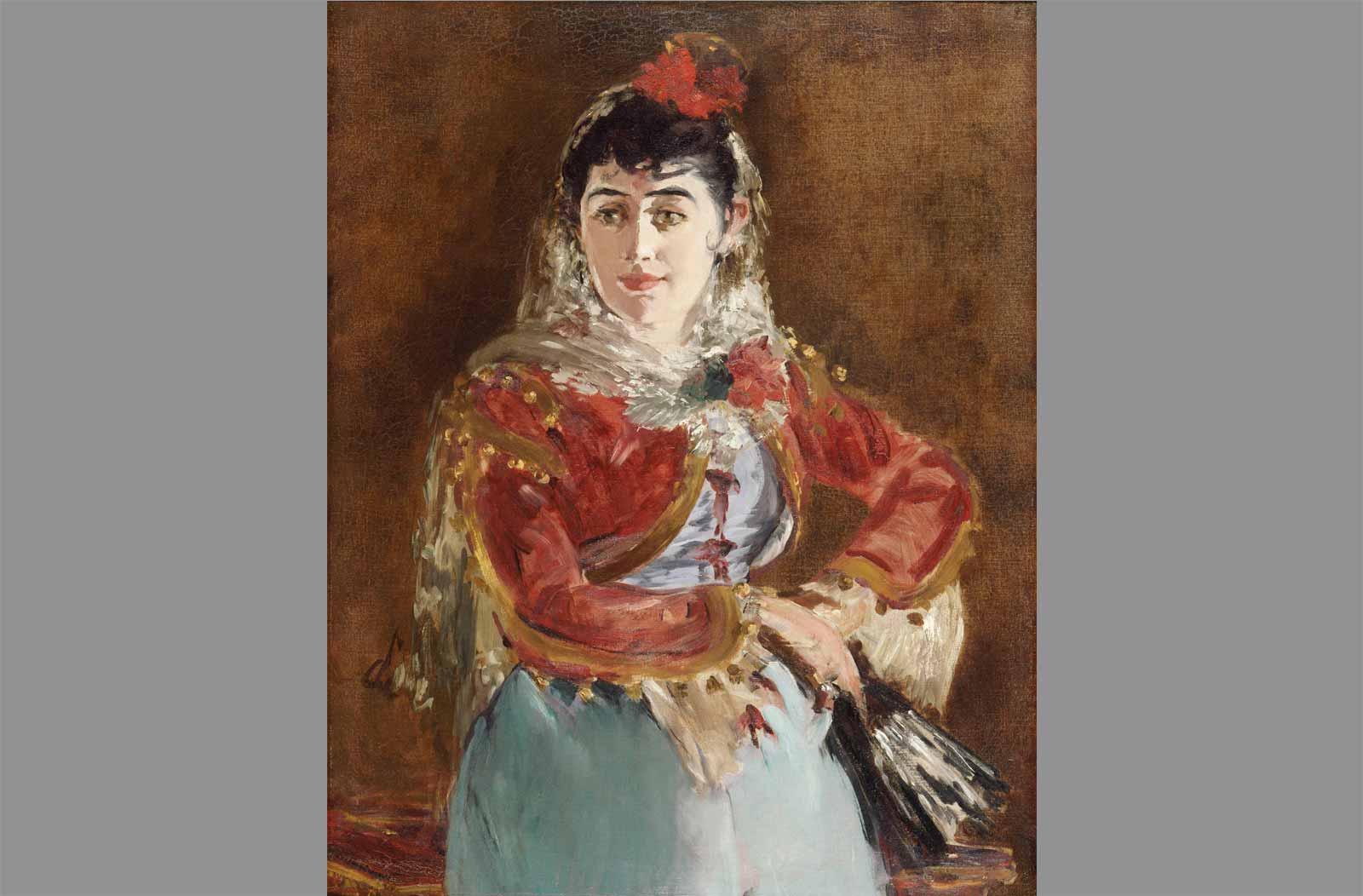 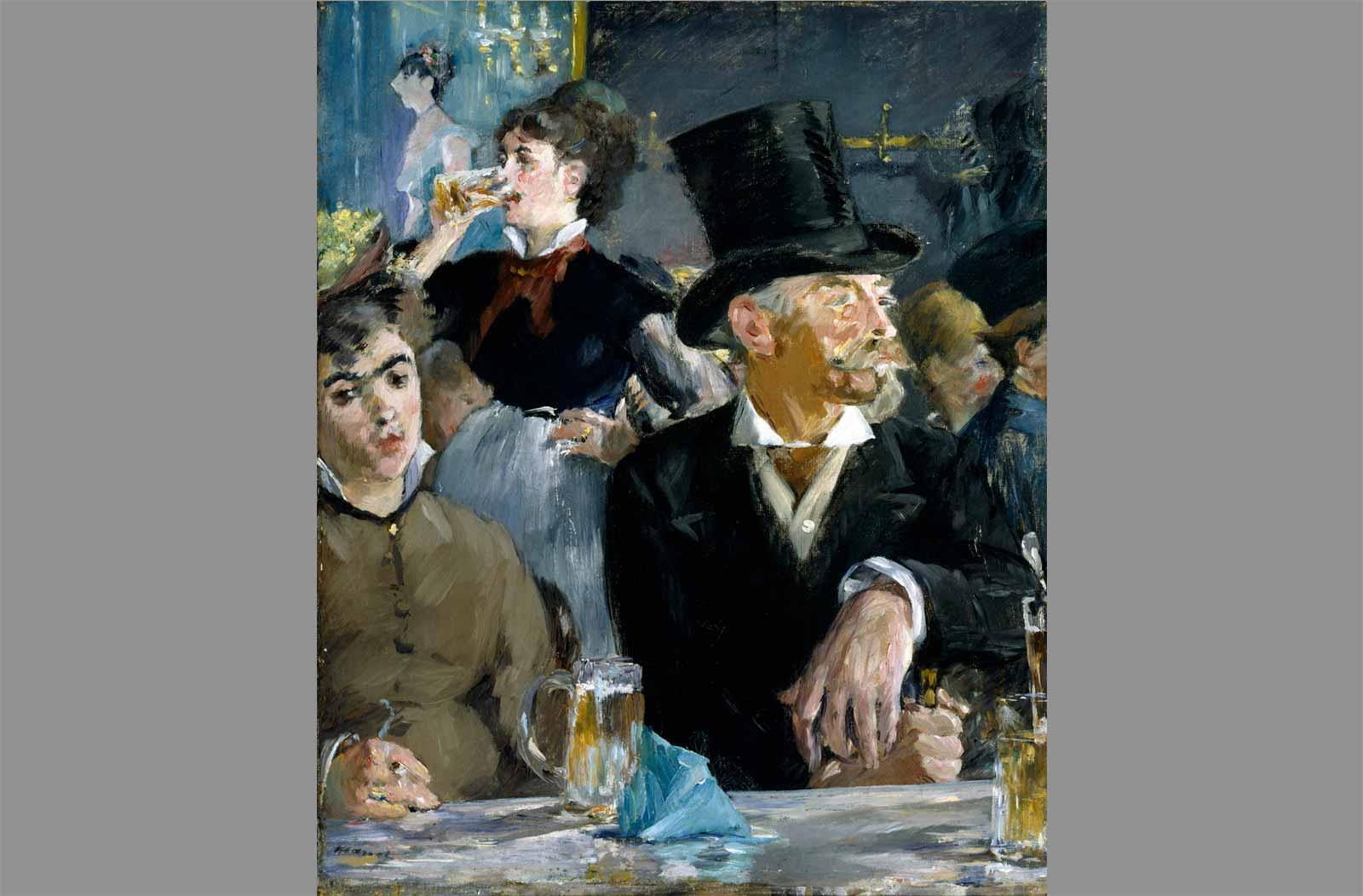 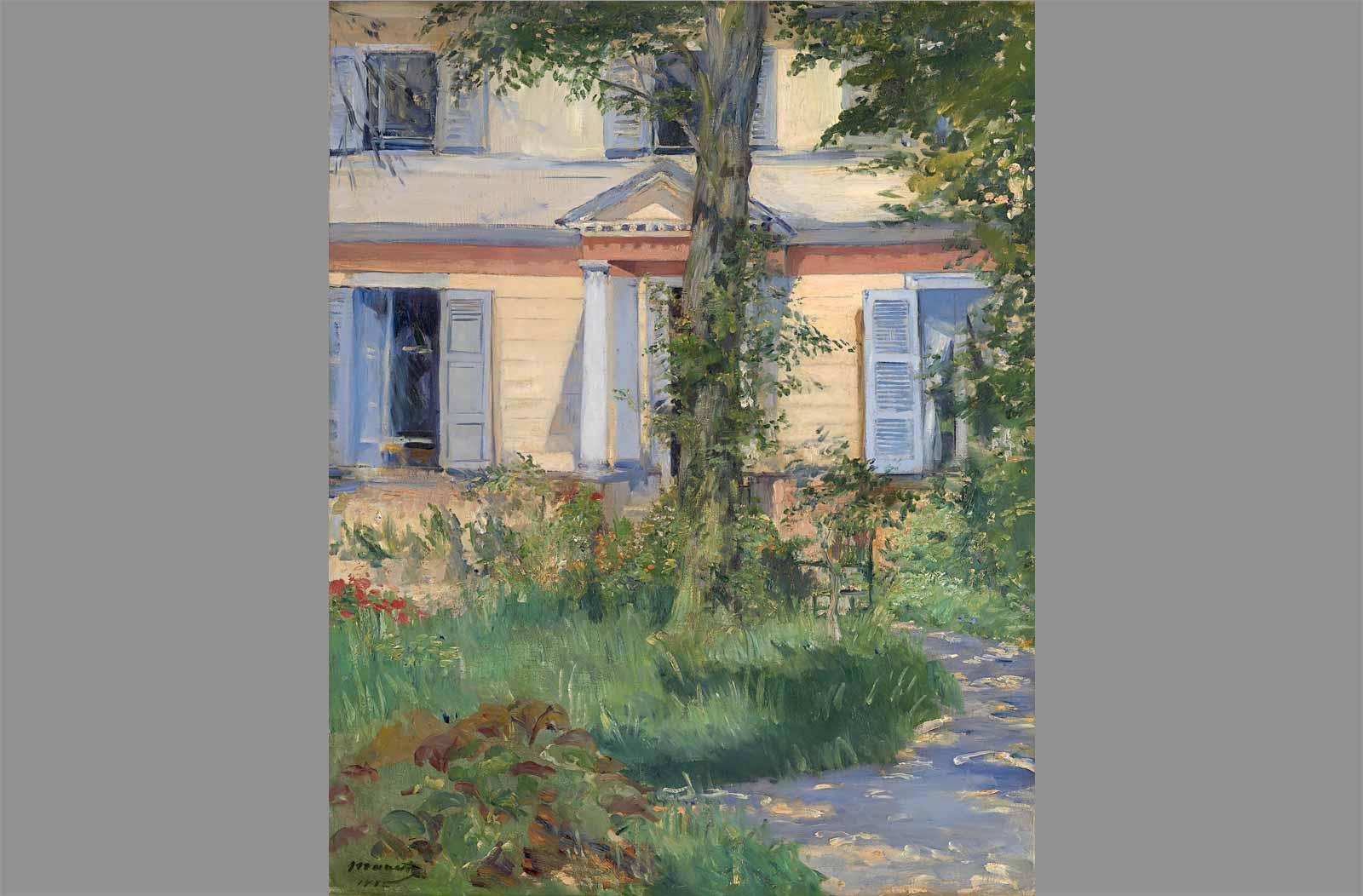 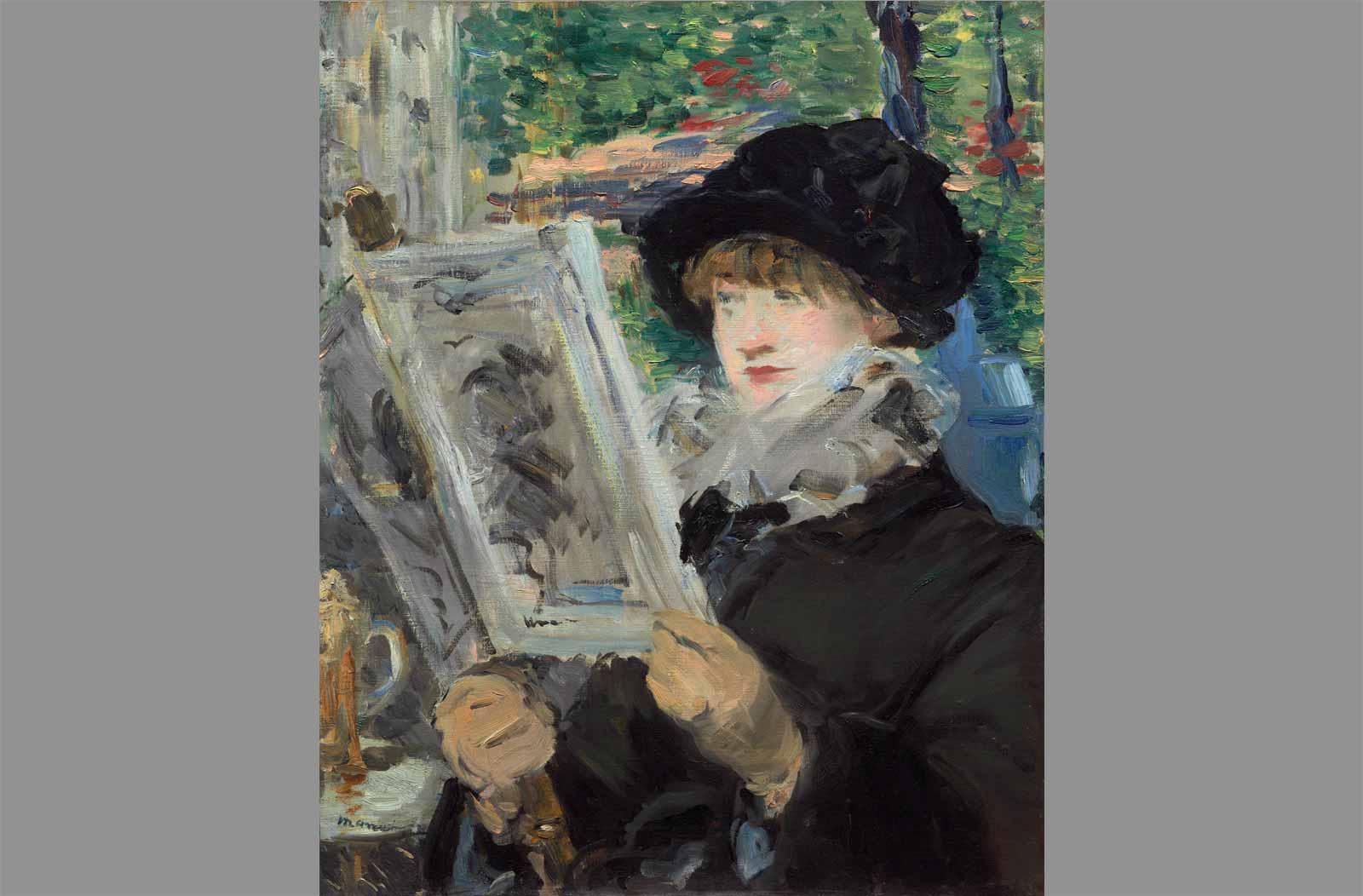 “This period is more problematic for many, many years because of the subject matter of women, gardens, cats, fashion,” Groom says. “It was considered inconsequential because it was feminine. And it took the work of feminist art historians to start looking at this again.”

As Manet’s health declined, he began painting beauty on a smaller scale, in splendid still lifes of everyday objects. An 1880 painting of a brioche transforms the buttery bread into a glistening treasure, from which a rose appears to bloom; meanwhile a cat subtly sneaks into the picture. But it’s his series of flowers, painted the year before he died, that best captures his pursuit of beauty: peonies, white lilacs, roses, and other colorful bouquets neatly arranged in crystal vases. Small-scale and intimate, they show off Manet’s meticulous brushwork and his attention to light and shadow. The artist could easily have placed these blooms in opaque vessels, but his choice of crystal suggests that he embraced the challenge of rendering reflections and refractions; the stems, too, are subtle allusions to the passage of time, as some are dark, seemingly rotting.

Quotidian as this subject matter is, Manet’s flowers speak to his attraction to femininity, sensuality, and freshness of expression. They are also records of how he distracted himself from his loneliness and pain during his final months. More than a refreshing look at the so-called “father of modern art,” Manet and Modern Beauty is a portrait of an artist who always found joy in his work, never giving up in the face of criticism or personal strife.

“It’s a story of someone who’s shifting his focus to accommodate a change in his physical condition,” Groom says. “Instead of despairing, he wanted to have some agency over his life. I think that’s a very human story that’s for all times.”

Claire Voon is a Chicago-based art writer. Her work has appeared in publications such as ARTnews, Artsy, Chicago Magazine, Atlas Obscura, and Hyperallergic, where she was previously a staff writer.